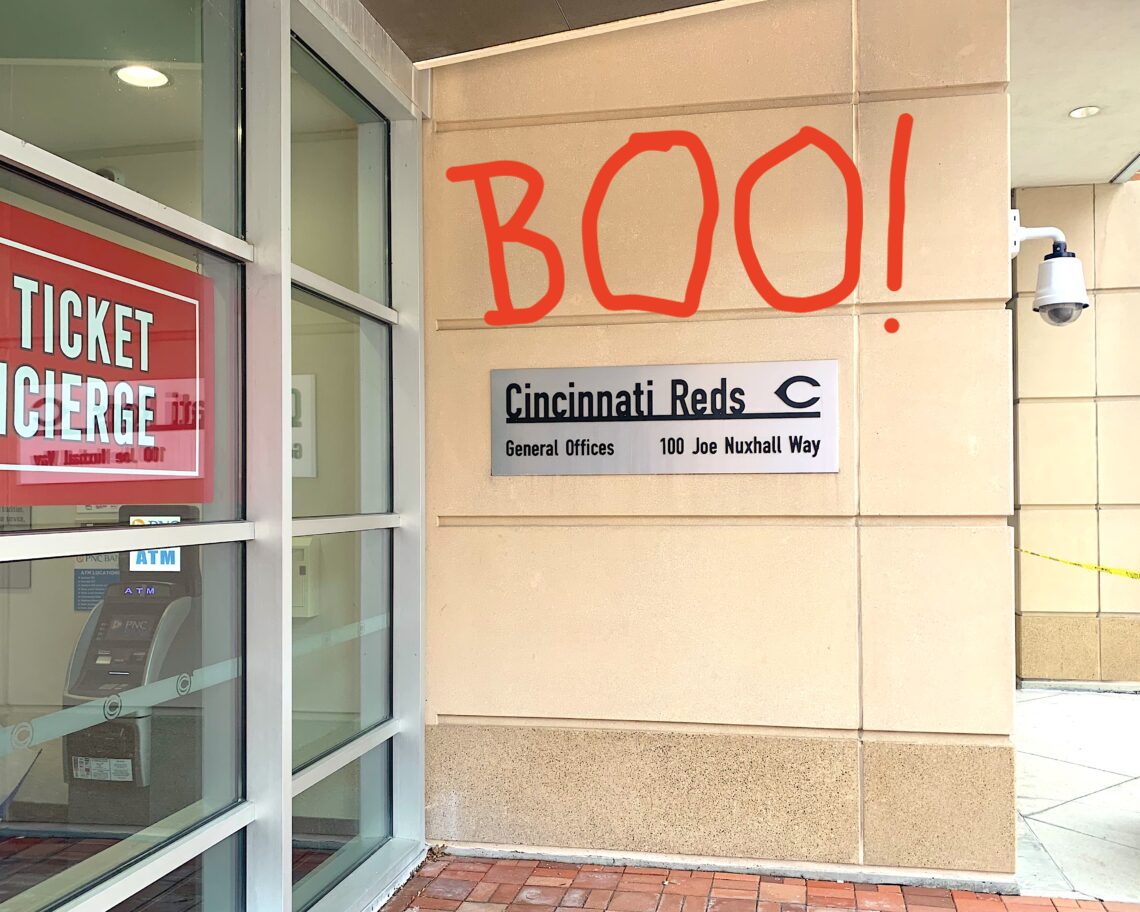 For the second night in a row, the Reds lost some because they were betting on the waiver claims.

To make matters even worse, David Bell’s team was playing the Milwaukee Brewers, the opponent where falling short matters the most. The Reds were an inning away from having enough bullpen to hold a 2-0 lead tonight. Instead, once again the Waiver Boys imploded. Ownership and the front office are squarely responsible for the likes of Sean Doolittle and Brad Brach pitching important innings.

The central fact of the Brewers-Reds race is that Milwaukee’s front office and owners acted aggressively to fix its biggest roster hole on May 21 while the Reds on July 18 are still siting on their assets having done nothing. Talk about not showing up to compete.

We witness the fallout from this disastrous mismanagement too often. This Reds team deserves better.

The Reds only had two hits in the first seven innings, but struck for two runs in the bottom of the 2nd. With one out, Tyler Naquin and Eugenio Suarez worked full-count walks off Brewers starter Brandon Woodruff. Shogo Akiyama, in the lineup because of Nick Castellanos being sidelined with a swollen hand from an HBP, hit a double-play ball right to Willy Adames at shortstop. But on the relay throw from second the throw was high. Jace Peterson, playing 1B out of position, stretched too soon and the ball went off his glove to the Reds dugout and Naquin scored. Akiyama went to second. One pitch later, Kyle Farmer yanked an inside curveball into the left field corner, making the score 2-0.

It ain't much, but it's honest work. 🧑‍🌾 pic.twitter.com/j9ATcIFpXk

It traveled 377 feet and tied the game 3-3. India also added a superb defensive play in the 1oth inning on a ball lined over second base. He dove past the bag to snag it on a fly.

The Reds got a run in the 10th to keep the game going. Jonathan India smacked a grounder to 3B that bounced off the glove of Luis Urias into left field. Michael Lorenzen, who was the runner at 2B to start the inning, moved to third. After a 109.1 mph line out by Jesse Winker, rookie Tyler Stephenson hit a fly deep enough to LF to score Lorenzen from third. That tied the game 4-4 but Lorenzen appeared to suffer a leg injury scoring. He limped severely to the plate.

The Reds got a hit in the 11th, but Eugenio Suarez and Aristides Aquino made outs. To suffer the greatest indignity possible, the Reds ran out of bench players and had to send Wade Miley up with two outs. Unlike Suarez, Miley did make contact. Unlike Aquino, Miley hit the ball in play.

Luis Castillo, making his 20th start of the 2021 season, pitched six shutout innings. He struck out eight. Castillo had thrown only 56 pitches through four innings and retired the first two hitters in the 5th on four pitches. But once the Brewers lineup turned over to start the third time through, Castillo couldn’t find the strike zone. It took him 41 pitches to record the last four outs. He hadn’t walked anyone until that stretch, but gave away three free passes to the Brewers in the 5th and 6th.

Castillo’s slider was super effective tonight. He threw it 21 times and as you can see from the graphic he was working them to break off the plate. He got the Brewers to swing at 14 of them and they missed 11 times. That’s an astronomical 79% whiff rate. Castillo threw both his fastballs an average of 98 mph. 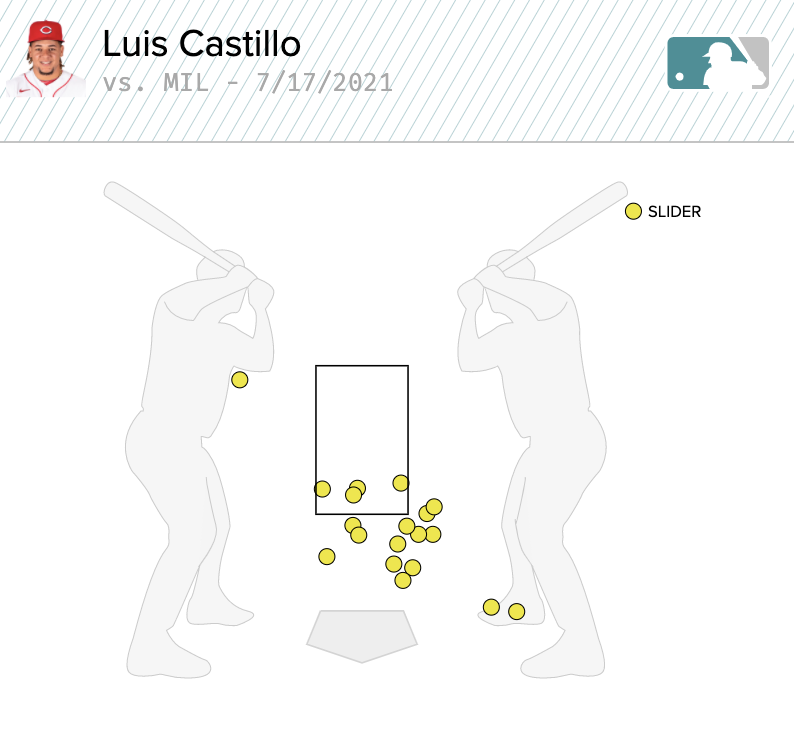 Overall, it was another excellent start by Luis Castillo. Even though his stats from the game didn’t reflect it, Castillo’s 5-inning start against the Cubs on May 29 was when he first showed signs he was figuring it out. After nearly a dozen starts, dating back to Opening Day, where the 28-year-old seemed to lack command and focus, on May 29 Castillo consistently fired the ball down in the strike zone. In the eight starts since then, his xFIP (3.69) has been more than 10% better than league average and back at his career standard.

For the second night in a row, the Reds bullpen was a disaster. Amir Garrett started the 7th inning. he got ahead of the first two batters he faced, but then grooved sliders to both. The two batted balls were grounders, but not soft ones. Then Garrett had Christian Yelich fooled but the former MVP tapped the ball down the first base line. Catcher Tyler Stephenson got to it and the only play he had was to first base, allowing a run to score from third.

Bell brought in Brad Brach. On an 0-2 pitch, SS Willy Adames lined a single to right tying the game. It looked like Tyler Naquin’s throw to the plate had a chance to get Kolton Wong, but the ball bounced in front of the plate and Stephenson couldn’t come up with it. Adames went to second on the throw to the plate. For some reason, Brach tried to pick Adames off second and threw the ball into the OF, allowing Adames to advance to third. Omar Narvaez lifted a soft liner to center. Shogo Akiyama made a spectacular diving catch, but Adames was able to tag and score ahead of the throw. The Brewers had scored three and led 3-2.

Michael Lorenzen made his first appearance of the 2021 season in the 8th inning. He gave up a double and a walk but got out of the inning with a strikeout of Reds killer Kolten Wong. It was Lorenzen’s second strikeout of the inning. Heath Hembree, who has become an effective 9th inning reliever, worked around a single to shut out Milwaukee in the 9th.

Lefty Josh Osich came in to start the 10th with Avisail Garcia on 2B. Jace Peterson hit a deep fly ball to right field that allowed Garcia to reach third with an out. Luis Urias singled to center on a 3-0 pitch. After a great defensive play by India to get the second out, the Brewers got another hit but didn’t score more.

Lefty veteran Sean Doolittle started the 11th and gave up a leadoff double to Christian Yelich that gave the Brewers a 5-4 lead. The Doolittle pitch to Yelich is a candidate for one of the worst by a Reds pitcher this season. It was a fat, grooved curveball in the middle of the plate.

A ground ball that took a bad hop on Kyle Farmer put a second runner on. Omar Narvaez grounded out to Votto at first and runners moved to second and third. Bell brought in Ryan Hendrix who faced Garcia. On the first pitch, Garcia on a full swing hit the ball about six feet. His throw to the plate didn’t get Yelich. The Brewers led 6-4. A Jace Peterson sac fly made it 7-4.

The Reds and Brewers play the finale of the 7-game series tomorrow as the Reds try to salvage a game at GABP. Game time is 1:10 pm. It’s a terrific pitching matchup between Sonny Gray and Corbin Burnes.

I thought Aquino was about to do some serious damage, when he fouled a hard line drive that Urias made a brilliant diving catch on. It was the 10th pitch of the AB. After falling behind 0-2, he worked the count to 3-2 while fouling off 4 fastballs. I expected he’d either walk or hit another fast ball hard, which he did, but ….

It was that kind of game.

Not counting the relievers who have pitched in both games of the series, the Reds only have Doolittle, Perez, Santillan, and Hembree available tomorrow, unless someone is immediately brought up for Lorenzen. So Hembree’s available to close and otherwise I’d go with Santillan for multiple innings.

What money and assets do the Reds have to trade? They don’t have either and I’m not trading Hunter for anything.

The Reds have plenty of mid-level prospects to trade. They can also take on contracts, which is valuable to teams looking to ditch. Look at these trades, the selling team isn’t asking for much. The Brewers won’t miss what they gave up for Adames.