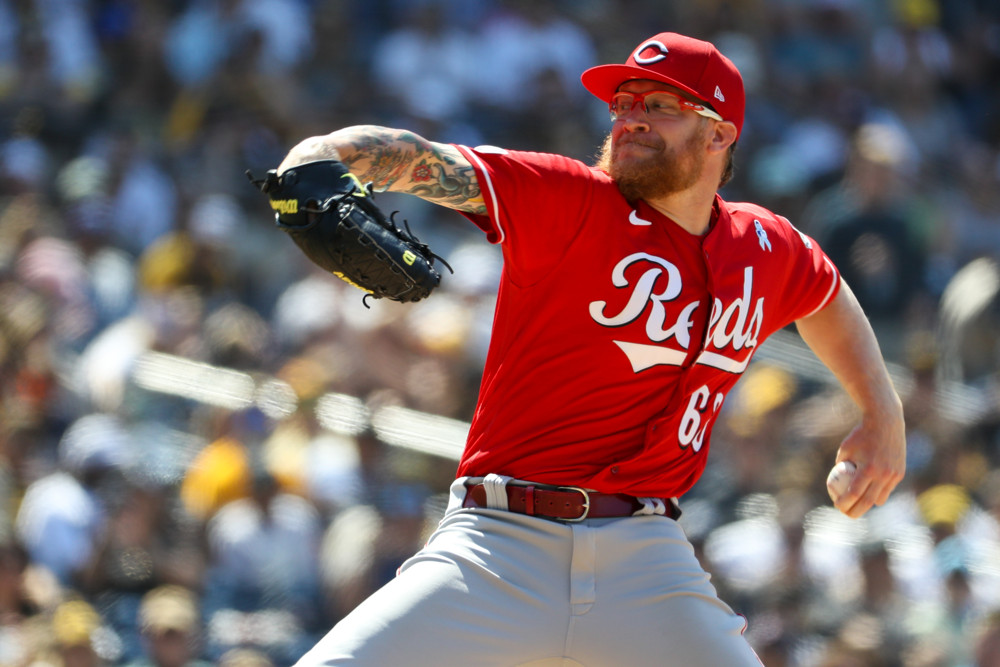 The Reds were one out away from securing a series win over the Mets and gaining a game on both the Brewers and Padres in the playoff race.

But David Bell brought in Sean Doolittle — who I don’t need to remind you had a 4.19 ERA, 4.53 FIP, and 5.75 xFIP coming into the game — with two outs to face a lefty. It blew up in the Reds’ faces, as Doolittle allowed the tying run. The Reds would go on to lose 5-4 in the 10th inning. The team remains seven games back of the Brewers in the NL Central and four of the Padres in the Wild Card. Huge missed opportunity tonight.

After looking fairly hapless against Mets lefty Rich Hill through three innings, the Reds finally broke through in the fourth. Kyle Farmer hit a one-out single and Aristides Aquino drew a two-out walk to put a pair of runners on.

Eugenio Suárez worked a 3-2 count against Hill, who got the Reds third baseman to swing through a pair of high-80s fastballs up in the zone during his first plate appearance. Suárez was ready this time around, though, blasting a high fastball for a three-run home run (106.2 mph, 440 feet) to give the Reds a 3-1 lead. It was the second-longest homer of Suárez’s season.

These streets will make you feel brand new, big lights will inspire you. 🌆 pic.twitter.com/iyrPcnMYlI

The Reds had a chance to add more when Tucker Barnhart was hit by a pitch and Shogo Akiyama hit an opposite-field double, just the second extra-base hit of his career against lefties. Wade Miley went to a full count against Hill before hitting a low line drive to left field. It looked destined to be a two-run single with a .970 expected batting average. But left fielder Dominic Smith — who is the fifth-worst defensive outfielder this year by outs above average — made a sliding catch to rob Miley and end the inning.

Farmer destroyed a hanging curveball by Hill in the top of the fifth inning for a solo home run to get the Reds back on the board. It was the longest homer Farmer’s career.

There wasn’t much action to speak of until the eighth, when Farmer hit a single to lead things off. That brought Joey Votto to the plate in his final chance to tie the record for homers in consecutive games (8).

He sent a long drive to deep right-center field that looked like it’d extend the Reds’ lead and get him a share of the record. The ball went 377 feet, but it was just a inch or two away from clearing the fence. Votto settled for a single but moved Farmer up to third base in the process.

.@CitiField, you should've made your right field wall a few inches shorter… pic.twitter.com/HOwBvaGjYM

With no outs, though, the Reds couldn’t get a runner home. Pinch-hitter Tyler Naquin struck out in a horrible at-bat in which he swung at two pitches out of the strike zone. Suárez was then called out on strikes on a pitch outside the zone. The Mets brought in a lefty to face Tucker Barnhart, and Tyler Stephenson was sent up as the pinch-hitter. Suárez was ejected during the pitching change.

Here’s a look at the pitch location: 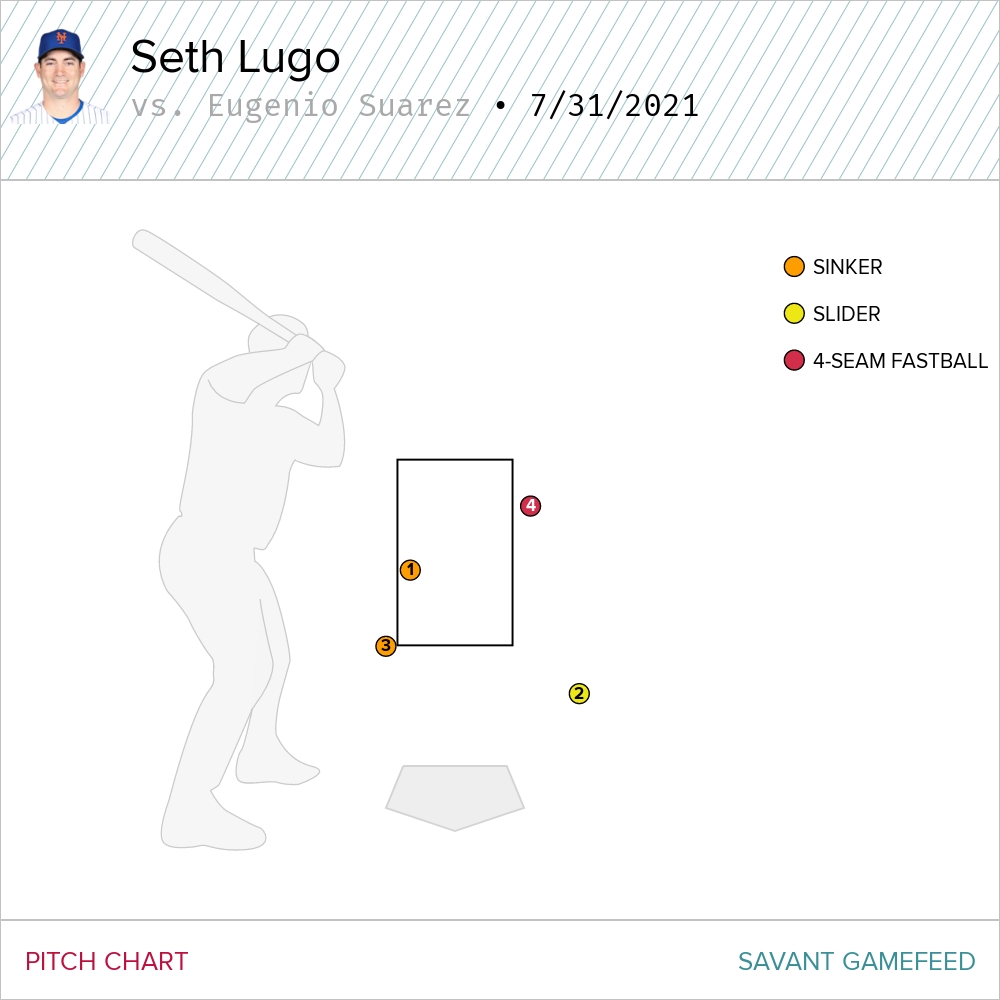 The scoring threat ended in particularly painful fashion when Votto was picked off at first base. Farmer broke from home and was tagged out after a short rundown. It became more painful after the Mets tied the game the next inning.

Jonathan India started the 10th inning on second base and moved to third on a wild pitch by Mets closer Edwin Diaz. Jesse Winker walked to put runners at the corners. But Diaz bounced back by striking out Farmer and Votto, and getting Tyler Naquin to line out.

Wade Miley rebounded from a rocky start on Monday to turn in a quality outing on Saturday. The southpaw went seven innings, allowing three runs on four hits and three walks. He struck out two.

After getting hit a bit harder in his last few outings, Miley returned to his old ways. The Mets average exit velocity against him was just 83.7 mph, and 11 of the 21 batted balls he allowed were grounders.

Miley cruised through the first two inning, working around a walk with six groundouts. He ran into trouble in the third, however, giving up a leadoff double to Brandon Drury. After a sacrifice bunt moved Drury to third, Jonathan Villar hit a broken-bat, RBI single with an exit velocity of 79.1 mph. Miley escaped any further damage by getting Pete Alonso to ground into a double play.

The Reds left-hander retired six of the next seven hitters but got into trouble again in the sixth inning. Miley walked Villar to lead off the inning, and Alonso followed with a single. Miley caught a huge break, however, when he caught Villar napping and picked him off at second base. It was a particularly huge because the next batter, Javier Báez, crushed a home run to cut the Reds’ lead to 4-3.

Miley was sent out for the seventh inning at 83 pitches and retired the Mets in order.

Michael Lorenzen pitched for a second night in a row and had an easy eighth inning, getting two groundouts and a popout.

Heath Hembree got the Reds into a mess in the ninth inning by walking the leadoff batter. After striking out Báez, Hembree threw a wild pitch (that probably should’ve been blocked by Tyler Stephenson) to move the runner up. Hembree went to a full count against James McCann but struck him out on a sweeping slider.

With the left-handed Dominic Smith due up, David Bell turned to Sean Doolittle. It was a questionable decision on two levels: Sean Doolittle has been terrible this season, and Smith has reverse platoon splits:

In an extremely interesting development, Doolittle hit 97.8 mph with his fastball tonight — the first time he’s thrown a pitch that hard since 2016 — and averaged 96.4 mph. His average velocity was up by 3.4 mph over his season average. But Doolittle threw a 1-2 curveball to Smith and threw it out of the zone but didn’t get it low enough. Smith reached out and poked it to center field to tie the game at four. Doolittle struck out Kevin Pillar to end the inning. Doolittle has now allowed 63% of inherited runners to score this season, fourth worst in baseball among relievers who inherited at least 15 runners this season.

Luis Cessa pitched the 10th inning and took all of four pitches to give up the walk-off single.

The Reds and Mets will conclude their series on Sunday afternoon at 1:10 p.m. EST. Saturday’s loss was particularly harmful as Sunday’s pitching matchup is a huge mismatch on paper. Vladimir Gutierrez will take on Marcus Stroman.

Nice job, Matt, although painful to read. Bringing in Doolittle for Hembree perhaps the worst decision Bell has made this year.