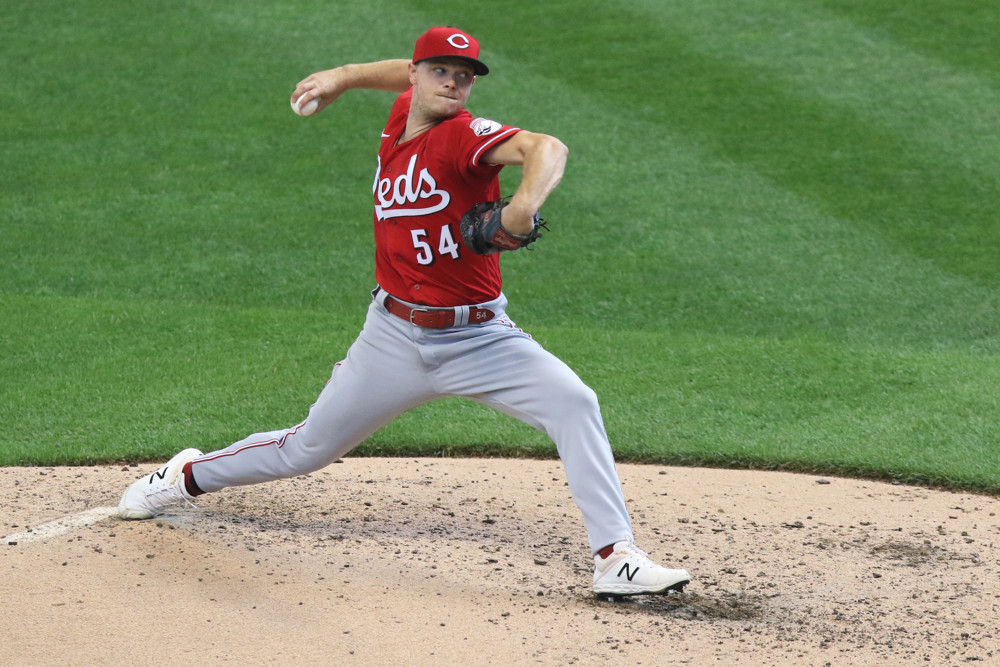 The Reds entered this series against the Cubs at .500 and 8 games back of the division leading Brewers. However they were only 1.5 games back of the Cubs, so tonight could be the catalyst for securing 2nd place in the NL Central. In front of a juiced GABP in the first sellout of the season, the Reds were able to take the series opener. Reds pitchers allowed only one run and timely hitting by Votto provided just enough offense. The Reds were happy to welcome back Sonny Gray. While the bullpen has been a sticking point throughout the season, tonight they got the job done to put the Reds one game above .500.

The Reds faced Cubs right-hander Alec Mills, who has jumped between spot starting and the bullpen for the Cubs this season after being beat out by tomorrow’s starter Adbert Alzolay for the 5th spot in spring training. You wouldn’t know it top of the 1st as Mills made quick work of the Reds, including strikeouts of Jonathan India and All-Star starter Nick Castellanos.

Other than a Joey Votto walk, the Reds failed to reach base the first time through the lineup against Mills. Jonathan India singled on a ball stung past the outstretched shortstop in the top of the 3rd, but All-Star starter Jesse Winker was unable to move him over, and the score stood at 0-0 through 3 innings.

The 4th inning was another scoreless frame for the Reds, this time from the heart of the order: Castellanos, Votto, and Tyler Naquin. The Reds are a far cry from their usual offensive selves when Sonny Gray pitches, averaging only 2.6 runs per game. It’s even worse when Gray is still physically in the game:

Reds have scored 11 runs while Sonny Gray was in the game this season…in 11 starts.

The Reds had their first real threat in the bottom of the 6th, when the Reds leader in BB%, rookie Jonathan India, drew a walk with one out. After Winker flew out, Castellanos put India in scoring position with a hard single to center, sending Joey Votto to the plate. Cubs manager (and former Reds catcher) David Ross countered by bringing in a lefty to face Votto, ending starter Alec Mills’ impressive outing after 91 pitches, his season high. With 2 outs and 2 on… the Reds’ legend delivered. Joey took a high and tight fastball and scorched it down the right field line (107.2 mph exit velo), scoring both India and Castellanos. Naquin flew out to end the inning, but Votto’s clutch double put the Reds ahead 2-1.

The Reds got a baserunner on a hard hit Eugenio Suarez single and that eventually turned into Kyle Farmer on second base after he hit into a fielders’ choice, then advanced on a wild pitch. The Reds were unable to score Farmer however, and would be onto the 8th still up one run. There is always a lingering pessimistic energy when the Reds are up a run late in the game that they’d need another run or two for cushion due to an often shaky bullpen. On this night the bullpen had put together three scoreless innings through 8, and it would be a tall task to ask them to go four.

The Reds saw the top of the lineup go down in order bottom 8, so no further cushion would be provided for the ‘pen heading to the 9th.

Sonny Gray made his first major league start (he threw 3 scoreless innings in his AAA rehab start on 6/24) since June 8th after a left groin strain kept him on the 10 day injured list. He came out looking like the Gray of old in a 1-2-3 top of the 1st, including a 3 pitch strikeout of Javy Baez, the major league leader in strikeout rate.

Gray’s curveball looked extremely sharp, and he was pinpointing his fastball and sinker on the outer parts of the zone in the first three innings. In the top of the 2nd he struck out the side including swing and misses on biting curveballs to lefties Rizzo and Heyward, and painted the outside corner on a comeback fastball to righty Patrick Wisdom. Gray has what are commonly referred to as “reverse platoon splits,” where he tends to be more successful against left-handed hitters rather than the right-handers:

In the top of the 3rd, Joc Pederson was the latest strikeout victim on a 93 mph sinker that truly painted the outside of the black. Sonny did allow two base runners in the inning on an infield hit and walk, however he still was hitting his spots overall, and missed by the slightest of the margins during the walk to Contreras. He got out of the faux jam by getting Baez to groundout to end the half inning.

Sonny Gray threw his first bad curveball with 2 outs and a runner on in the top of the 4th, when Jason Heyward smoked the hanging pitch to the right center gap, scoring Kris Bryant to put the Cubs ahead 1-0. Heyward had been 1-21 career entering the at bat against Gray, but he won the battle this time on a pitch Sonny wishes he could have back. Sonny got some all-star worthy defense to get out of the inning, when Winker made an impressive sliding catch on a Happ liner to left field.

Gray retired the first two batters he faced in the top of the 5th, Mills and Pederson. Some “third time through the lineup” concerns arose when Contreras stung a double to the right-center gap, but Gray alleviated all of those by striking Javy Baez once again. Sonny dotted the outside of the zone with a sinker that Baez could only look at for his eighth strikeout of the day.  This would end up being Gray’s last batter of the day, and his final line included 5 innings of 5 hit, 1 run, 8 strikeout and one walk baseball on 86 pitches.

One thing Reds fans were keeping an eye on during Sonny’s return were some of his spin rates, especially on his devastating curveball. Here is a breakdown of Gray’s spin rates from his first two starts in June as compared to before the new “sticky stuff” rules were enforced this year and 2020, as part of a larger breakdown on the Reds pitching staff as a whole:

Here was the breakdown on pitches he threw 15 or more times in tonight’s start:

(Before drawing any conclusion about this data, keep in mind that these spin rates are often adjusted the next day. There are pitches that the Hawk-Eye system misses. For example, it indicates Gray threw a 164-rpm curve which is unlikely. But still worth watching.)

Similar to his earlier June starts, Sonny’s RPMs are significantly down on his curveball, and down by a lesser factor on his fastballs. However while the spin was down, Sonny’s curveball was as effective as it’s always been as he still saw consistent vertical break over 50 inches, and allowed only one of the 28 he threw to be put in play. While no true conclusions can be drawn overall on one outing, Sonny’s overall effectiveness was not impacted by spin in tonight’s start, especially on his curveball.

Art Warren came in top 6, and hit Rizzo with a pitch. He then struck out Bryant on a high 4-seam heat, and induced a ground out to Wisdom thanks to a superb Farmer defensive stop to take away a hit.

Farmer working in the dirt. 😳 pic.twitter.com/NeIST0J3hB

Warren was then pulled in favor of lefty John Osich with Heyward stepping to the plate. Osich threw Heyward 6 straight cutters, the last of which Heyward grounded out to 1st on.

Amir Garrett came in to pitch in the top of the 7th, and began with a strikeout on a filthy slider to Ian Happ. After getting a groundout to pinch hitter Marisnick, AG walked Joc Pedersen. Although he was pulled after the minimum three batters, this was AG’s 8th straight appearance not allowing an earned run. This is a significant development for a pitcher who had been struggling for much of the season, and one who will continue to be put in high leverage situations with Antone and Sims on the mend. Brad Brach was brought in to handle Contreras, and he got him to groundout on a high chopper to 3B, where Suarez made a long throw to gun him down on a close play the Cubs unsuccessfully challenged.

Brach stayed in to face the top 8th, and faced the major league leader in strikeouts and swing and misses, Javy Baez. Baez extended both leads after Brach blew a high fastball by him on a full count. Brach then struck out Rizzo on a fastball lower in the zone, after setting him up with a slider. Bryant then stepped to the plate, a rare Cubs player who had been seeing the ball well throughout the night. Brach got a check swing comebacker, and just like that he was through the toughest part of the Cubs lineup and the Reds were three outs away from victory.

Heath Hembree would be the man called upon to close it out in the top of the 9th, and he would be due to face Wisdom, Heyward, and Happ. Hembree was locked in against Wisdom, keeping the ball on the outer part of the plate, which was the spot he eventually got a whiff on a dipping slider. One pitch later after getting Heyward to groundout, the Reds were one out away from taking game one against the Cubs. After Happ put together a solid at bat culminating in a single to right, Hembree struck out pinch-hitter Ortega to nail down the save.

The Reds host the Cubs for game 2 in the weekend series with an afternoon game at Great American Ball Park. First pitch is at 4:10 p.m. EST as Tyler Mahle takes the hill against Adbert Alzolay.

go reds!! always love to see them shut down the cubs am I rite

A great start of the series coupled with great news of TWO (2) Reds players starting in the ASG. What a day!

Is Joey votto the best Red of all time, or the greatest? Ppl are asking

Nice work, Brian. A lot of excellent pitching from both sides, but with that umpire’s strike zone, it was very tough on the hitters. On the postgame show, Sam LeCure was all for it.