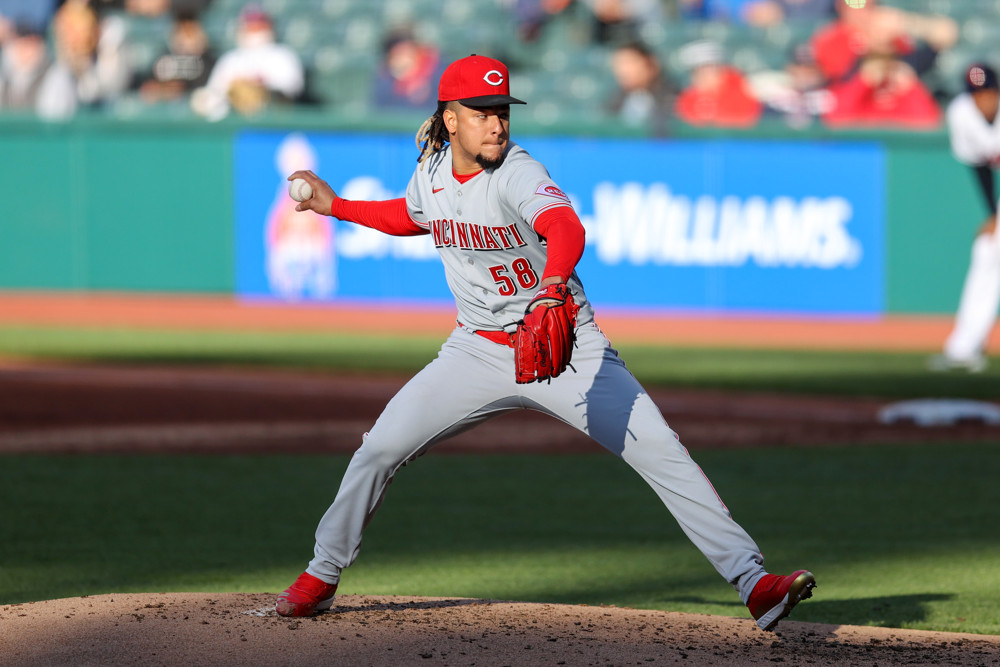 The Reds strong offense was shut down by Brewers starting pitcher, Brandon Woodruff. Over the course of 6 innings, the Reds managed to only get 4 hits off of the Milwaukee All-Star, with Jonathan India being the only other Redleg to reach first (via a hit by pitch in the first inning).

The Reds had a good chance to score after that hit by pitch. With the ROY candidate on first, Tyler Naquin bunted to reach first, and both runners advanced on a long fly out from Nick Castellanos. With runners on second and third with one out, run expectancy is at 1.38. However, the Reds were unable to bring either runner home, with a respective strikeout and groundout from Joey Votto and Mike Moustakas.

After the first inning, Woodruff refused to give the Reds another opportunity to score. After Kyle Farmer singled on a fly ball to short right field, Woodruff struck out the next 5 Reds hitters and was perfect from the 3rd-5th inning.

The Reds struggled against the Brewers relievers as well. Brad Boxberger started things off with a perfect inning, striking out Moustakas and Farmer and inducing a pop out from Tucker Barnhart. Cincinnati almost scored against Devin Williams. With one out, Max Schrock hit a long fly ball to right field, but was robbed of a home run by Avisail Garcia.

The Reds sole run came in the ninth inning off the bat of Nick Castellanos. After working a 2-1 count, he clobbered a pitch to deep center field, bringing the score to 4-1.

Facing off against the Brewer’s All-Star was Luis Castillo. Castillo has had his ups and downs this season, but today was a fairly dominant start. Castillo managed to pitch into the 7th inning, only giving up 4 hits and 2 walks. He also struck out 6. 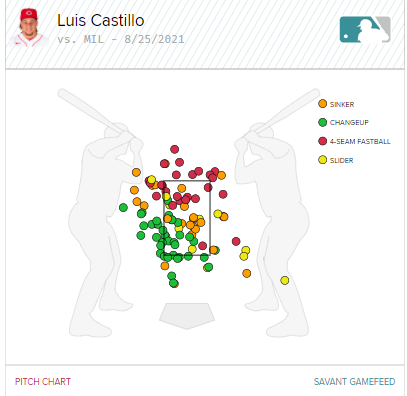 Castillo was in vintage form the placement and movement on his pitches. Typical for him, he used his 4-seam fastball to set up his dominant secondary pitches, with the majority of his strikeouts occurring on his changeup. His changeup was complemented well with his sinker, which moves in a similar fashion albeit at a higher velocity.

Lucas Sims relieved Castillo during the 7th inning with two runners on. He struck out the next two Brewers hitters, getting 5 swing and misses on 8 pitches.

Amir Garrett relieved Sims in the 8th inning.  Garrett’s command issues continue to persist. After walking leadoff hitter Kolten Wong, Garrett induced a pop out from Omar Narvaez but gave up a hit to Christian Yelich. Wong then scored on a wild pitch from Garrett. Rowdy Tellez then singled on a ground ball up the third base line, loading the bases.

With no empty bases and only one out, Jeff Hoffman relieved Garrett in the 8th inning. Hoffman induced a groundout from Luis Urias, but Yelich scored, bringing the score to 4-0. Hoffman then walked Jace Peterson, loading the bases for the second time that inning. However, he was able to stop the bleeding by striking out Lorenzo Cain.

Tomorrow, the Reds look to avoid the sweep. Sonny Gray is set to face off against Brett Anderson, at 2:10 PM EST. Hopefully the bats come to life and keep the dream of winning the NL Central alive.

After the leadoff walk on a 3-2 count, Garret had good stuff and good command. Yellich’s ground ball was not hit hard, it bounced off a diving Farmer’s glove. Tellez’ single was a swinging bunt on a terrible swing. Urias’ ground out against Hoffman that scored Yellich was also on a swinging bunt on a pathetic swing where he was badly fooled.

The Brewers did not hit a single ball hard or out of the IF in the 9th inning. The blemish was the two walks.

Woodruff tired in the 6th and the Reds, only behind 1-0 at that point, missed out on opportunity to go ahead or at least tie it up. With 1 out, Naquin lined a single to right. Castellanos then poked what looked like a double into the RF corner, but A. Garcia, the hero of the game for the Brewers, made a perfect throw to 2nd base and Nick was called out. On replay it looked like he might be safe, but too close to overturn.

Correction to the above and also what I said above. Yellich’s ground ball off Garret in the 8th was not a hit, it was a throwing error by Moustakas on a ground ball hit right to him. (Above I mentioned a ground ball off Farmer’s glove, that happened in the 7th inning.)
In short, the only hit by the Brewers in the 8th was a swinging bunt, and the run scoring ground out was on a “check swinging” bunt.

I wouldn’t say the ball was hit right to Moustakas. He was playing SS in a shift and had to lunge/dive back just to catch the ball and made a great play on that. His skip throw (don’t know if it was intentional) hit the edge of the infield cutout and gave Votto a bad bounce on a hard throw. Bad luck to be sure in the 8th inning. Also a lead-off walk and wild pitch.