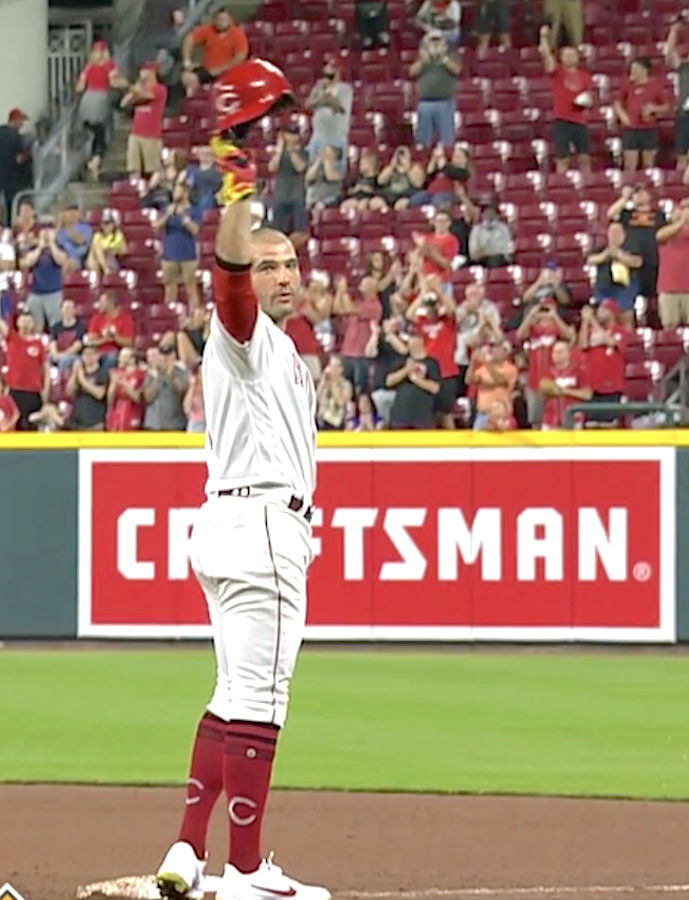 The Reds took care of business tonight, blowing out the hapless Cubs 14-5. It was the Reds second win in a row. Their record is 65-55, back to a season-high 10 games over .500. They gain a half-game on the idle Milwaukee Brewers and are poised to pick up a full game in the Wild Card race on the Padres who are losing 5-2 to Colorado late in the game. It was the Cubs 12th loss in a row.

For the seventh time in 22 starts, Wade Miley didn’t allow an earned run to score on his watch. He shut the New Cubs out for seven innings, scattering four hits and a walk. Miley struck out seven.

The 34-year-old left hander threw 97 pitches using his usual formula of mixing his 84.5-mph cutter and 82-mph changeup to keep the Cubs hitters off balance. Miley didn’t leave much in the middle of the zone on those two pitches.

Heath Hembree pitched the 8th with a 12-0 lead and couldn’t get through an inning. Taking an eternity between pitches, Hembree gave up three runs and left two runners on base. He’s assumed the pole position as the next Reds reliever to join Brad Brach on the IL list for indispensable relief pitchers that are unpitchable. Tejay Antone is due to return soon.

Jeff Hoffman relieved Hembree and gave up a double allowing his two inherited runners to score. Hoffman pitched the 9th.

After three frustrating innings where the Reds got two runners on base and didn’t score, NL Rookie of the Year frontrunner Jonathan India broke the 0-0 in the 4th with a 424-foot, two-run homer into the upper deck of Great American Ball Park’s left field. It was India’s 16th homer of the year.

Multiple choice question: Is @JonathanIndia the NL Rookie of the Year?

A- Yes
B- Of course
C- Duh
D- All the above pic.twitter.com/ph2ZOO1AHJ

The next inning, Aristides Aquino matched India with his own 2-run blast to left field. Aquino hit the ball 113.5 mph and made the score 4-0.

Punishing in the rain. 💀

Tucker Barnhart added to the scoring with his own homer to right field, making the score 14-5.

Three innings later came history. On a count that Joey Votto had worked from 0-2 to full, the Reds first baseman lined a Dan Winkler curve into centerfield for the 2000th hit of his career.

Votto became the sixth Reds player to reach 2,000 hits (Pete Rose, Barry Larkin, Davey Concepcion, Bid McPhee, Johnny Bench). Votto and Bench are the only two players who have 2000 hits and 300 homers with the Reds. Votto is the second Canadian player with 2000 hits (Larry Walker had 2160).

I know you want to know what 2000 hits look like all in one place, so here’s a spray chart for all of Votto’s base knocks. It’s a beautiful thing. 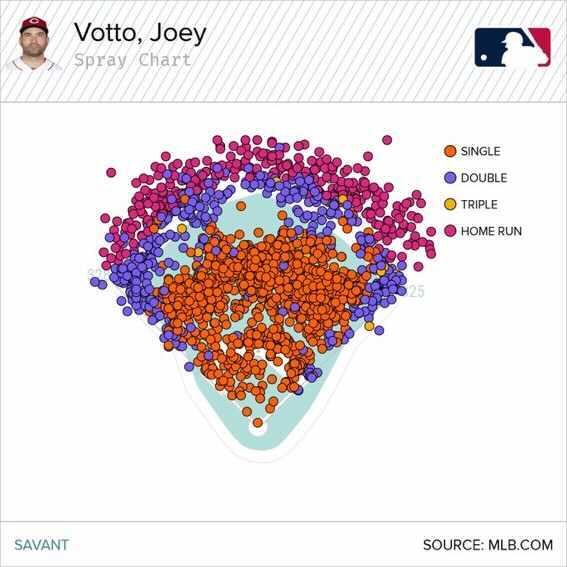 .@JonathanIndia clears the bases and the @Reds have blown this one wide open!

And newcomer Jose Barrero had one of the walks, matching his total of free passes in all 68 of his 2020 plate appearances.

The Reds and Cubs meet for another night game tomorrow. The pitching matchup is Vlad Gutierrez vs. Kyle Hendricks. Game time is 7:10 pm.

I think the question that it is increasingly coming into view is whether August 2021 Nick Senzel is the same player as he was before. Whether that be weight gain, overall fitness, still not trusting his knee, if you read between the lines, particularly of what Pat Kelly is saying (I don’t trust anything Krall says), Senzel isn’t a major league quality player right now. Which means his previous splits may not matter. I share your frustration with the front office failure to add another RH bat. Senzel, at least the previous versions, would have been a perfect fit, with his OF/IF flexibility.

Kind of weird though that if they think he’s out of shape or gaining weight that they would pick this time to experiment with him at SS.

I’m glad you mentioned how long Hembree takes between pitches, because it has driven me crazy over the last few weeks, especially with how bad he has been. When he comes in with the game on the line, I get a terrible feeling of suspense and dread, knowing that something bad is very likely right around the corner and I just want to get it over with, but he drags it out forever. I tried counting the other night and he routinely takes over 40 seconds between each pitch.

Turns out it’s a different, slightly less agonizing kind of maddening when a team is up by double digits and you just want the game to end.

It was tolerable when he was getting seven saves in July. But as you say, in different situations, it’s agonizing. Jeff Brantley on the radio broadcast was obviously frustrated by it and said it was a competitive disadvantage because (1) Hembree can’t get in a rhythm, (2) the batters have time to get settled and relaxed, (3) the defenders get bored and less attentive. I thought Hembree had maybe proven an exception to the rule about waiver acquisitions. He has learned a new slider that is effective. But since July, he’s reverted to the guy who won’t challenge hitters, just the like the rest of the gun shy wash-ups. The ones the front office is too timid to cut.

Hembree looks so anxious to toe the rubber and throw a pitch that it’s almost like he can’t do it; it seems so counterproductive for him to be in his own head so deeply. I wonder what DJ is telling him. I do wish MLB had some sort of exemption or way for veterans to go to AAA (or Goodyear, or Driveline) for a week or two to clear their heads and work on adjustments. While I don’t expect a waiver pick up to be great, he is so much worse than he was a few weeks ago that I feel really bad for him and fully expect that he can (will?) improve back to OK-decent som day, but also know that reality and performance dictate that he (or one of his ineffective, unreliable brethren) gets DFA’d in the coming days. Any re-emergence will probably have to come in another uniform – or at least next season.
Hoffman is his own case. He got behind every single hitter. Every. Single. One. Against a light-hitting lineup. Up 7+ runs. He has pitched regularly, so ‘rust’ is no reason. He’s 28 years old with 287 innings in the majors; youth and newness is not the reason. The light bulb just isn’t turning on.
After watching Miley operate effectively for seven innings with a starkly different approach, it was jarring to watch Hembree and Hoffman. They are on the same staff with a Jedi master, yet…

Every one of those relievers has a case (albeit slender) to be kept. Hembree had the month of July with seven saves. Hoffman can pitch multiple innings. Doolittle’s fastball velocity is up and he throws other pitches now. Wilson was excellent for years. But the bottom line is they are all mediocre at best. They aren’t better than other players available on the waiver wire. Yet the Reds front office seems willing to twist itself into knots to avoid making clear-eyed judgments and then decisions. With almost every one of those guys, the Reds could release them and they would still be available in another week.

Fun game overall. Joseph Daniel milestone (glad he got to get it at GABP). India continuing to grow before our eyes. Other gutty favorites doing damage (Farmer, Tucker, Nick). The Reds put the accelerator down to the floor – exactly what we hoped to see.

Agree with all of that. India is developing right before our eyes. Including on defense. When the season started, he was new to second base, particular the modern version where you shift all over the place. Teams need at least one infielder who has the athleticism to move all around the second base/right field area. The Padres, for example, use their 3B Manny Machado. The 2020 Reds used Freddy Galvis. You can’t have a guy like Mike Moustakas in that spot any more. India plainly struggled with the unfamiliarity of a new position early in the season. It led to errors and mistakes. But he has become a terrific fielder. Improving all the time.