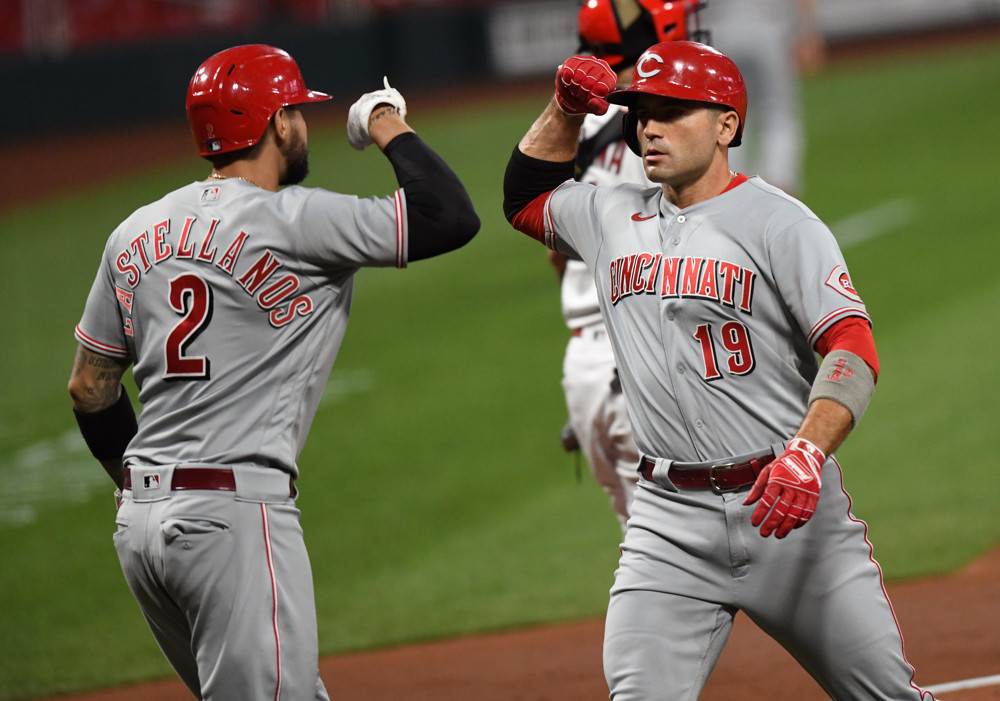 Sometimes, you can make all the right moves, and you still end up losing. You make the logical decisions, but they don’t work like they usually do. You put your best foot forward, and it gets stepped on.

With the strength of the Reds’ offense and consistency of Wade Miley’s season, I felt like the odds were in their favor. Unfortunately, this just wasn’t the case in today’s 8-6 loss against the Atlanta Braves.

Overall, the Reds struggled to score against Braves starter Touki Toussaint, although they were not hurting for scoring opportunities. The first opportunity came in the first inning. After a weak groundout from Kyle Farmer, Jesse Winker walked on four pitches and advanced to second on a wild pitch. After a strikeout from Nick Castellanos, Winker advanced to third on a single to centerfield from Joey Votto. With a runner on third, Mike Moustakas struck out to end the inning.

After a perfect second inning from Toussaint, the next scoring opportunity came in the third inning. With two outs, Jesse Winker reached on his second walk of the night. Castellanos followed this with a single to right center field. Votto then walked to load the bases. With two outs and the bases loaded, Moustakas worked a full count before popping out in foul ground to end the inning.

After a perfect fourth and fifth inning from the Braves, the Reds finally scored in the sixth. Nick Castellanos led off with a glancing hit-by-pitch. With a runner on, Votto crushed a home run over the centerfield wall. Measured off the bat at 106.7 MPH, this was Votto’s longest home run of the season, traveling a total of 442 feet.

Another scoring opportunity popped up in the seventh. After a groundout from Farmer, Winker reached first on yet another walk. After Castellanos struck out looking, Votto reached on a hard single to right field. With two runners on, Moustakas struck out to end the inning.

The Reds scored again during the eighth inning. Tyler Naquin reached second after a chopper bounced over the head of the leaping Ozzie Albies. He was brought home when Eugenio Suarez crushed a 102.9 MPH fly ball into left center for a double.

The Reds tied the game in the ninth. Castellanos led off with another hit by pitch. The Reds-hot Joey Votto then crushed a pitch over the outfield wall, this one measuring 103.6 MPH off the bat. With that home run, Votto passed Pete Rose for third on the Reds’ all-time RBI list. RBIs are a terrible metric to measure hitters, but it’s still exciting to watch Votto climb the leaderboard.

It’s worth noting how special it is to watch the career renaissance of Joey Votto. Today was a master class in plate discipline. Votto consistently worked counts, fouling off excellent pitches from the Braves before reaching either via the walk or a hard hit ball.

The Reds took their first lead of the game in the 11th inning. With Aristides Aquino on second, Kyle Farmer hit an opposite field single, bringing the run home.

At the beginning of the game, it looked like there was a steady flow of rain on the field. It’s unclear if this dramatically impacted Wade Miley, but the southpaw seemed to struggle with his control over the first few innings. Sometimes, he’s the Hulk. Today, he was just Bruce Banner. Over the first two innings, Miley walked three hitters and gave up five runs. He seemed to gain better control near the end of his outing, tossing perfect fourth and fifth innings. Unfortunately, the damage had already been done.

Much of Miley’s control issues came on his cutter and his changeup, which were consistently thrown out or in the middle of the strike zone. 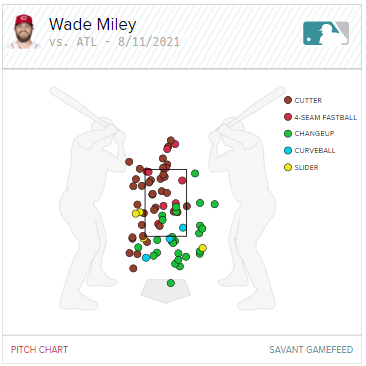 With these pitches not working in the early innings of the game, Miley was unable to set up his other pitches, laboring to get hitters out. In past seasons, Miley was dominant for the first few months of the season before struggling in August and September. Hopefully, we are not seeing history repeat itself.

Luis Cessa relieved Miley in the sixth inning and did a solid job overall. He induced two pop outs from Dansby Swanson and Guillermo Heredia and struck out Adam Duvall. His only baserunner allowed was Travis d’Arnaud, who singled on a ground ball to left field.

Justin Wilson came in to pitch in the seventh inning. At first, he made me nervous, walking Abraham Almonte to start the inning. He settled down and struck out Ozzie Albies and Jorge Soler before inducing an inning-ending groundout.

Heath Hembree took the mound during the eighth inning. He looked solid, retiring the batters in order, striking out Austin Riley and inducing a pop out and fly out from Swanson and Adam Duvall respectively.

With the game tied, Michael Lorenzen took the mound in the ninth. (By the way, Michael, I love you man. I really do. But you’ve got to shave. This is me, as a friend, telling you that this is not a good look for you. You don’t need to do a lot to look manly. Have you seen your biceps? You don’t need the beard. Just go ahead and shave. It really isn’t your best look. Still love you, though!)

Lorenzen struggled with command tonight. He started off the ninth inning by walking d’Arnaud. After striking out Heredia, Lorenzen walked Joc Pederson, bringing the winning run to scoring position. A flyout from Albies and a strikeout of Ehire Adrianza forced extra innings.

Mychal Givens took the mound during the 10th inning. After an intentional walk to Freddie Freeman, Givens induced two flyouts and struck out Duvall looking to send the game to the 11th inning.

Former Atlanta Brave Lucas Sims took the mound in the 11th for the save attempt. His stuff was good, with his spin rate staying fairly high, but he struggled with command and out efficiency. With two runners on, Albies hit a three-run home run to end the game.

The Reds look to avoid the sweep tomorrow, with Vladimir Gutierrez set to face off against Atlanta Braves starter, Kyle Muller. First pitch is at 5:10 PM EST.

Sims last 7 pitches, leading to the walk of Pederson (not a good idea) and the HR by Albies, were all fastballs. I don’t get that.

My thought is that he was turning to stuff he could command better, since he was struggling to find the strike zone.

I was at the game. Light rain for several innings early – not sure how that affected Miley, if at all. I felt like base running / (not) advancing runners was the difference in this one. Winker failed to score on Votto’s first inning single. Moustakas didn’t go 1st to 3rd on Naquin’s single to right in the 6th, so didn’t score on Suarez’ fly to left. And runners on 2nd with none out never even made it to 3rd in the 8th and 10th. And… that’s your ballgame. Also, Joey. Votto. Still. Bangs!

Super interesting perspective. Thanks for sharing. Good base running is such an underrated skill.

Agreed. I was complaining about the base running in our Slack forum during the game. (Chris, I think you’d enjoy being part of that. I’ll send you an invite.)