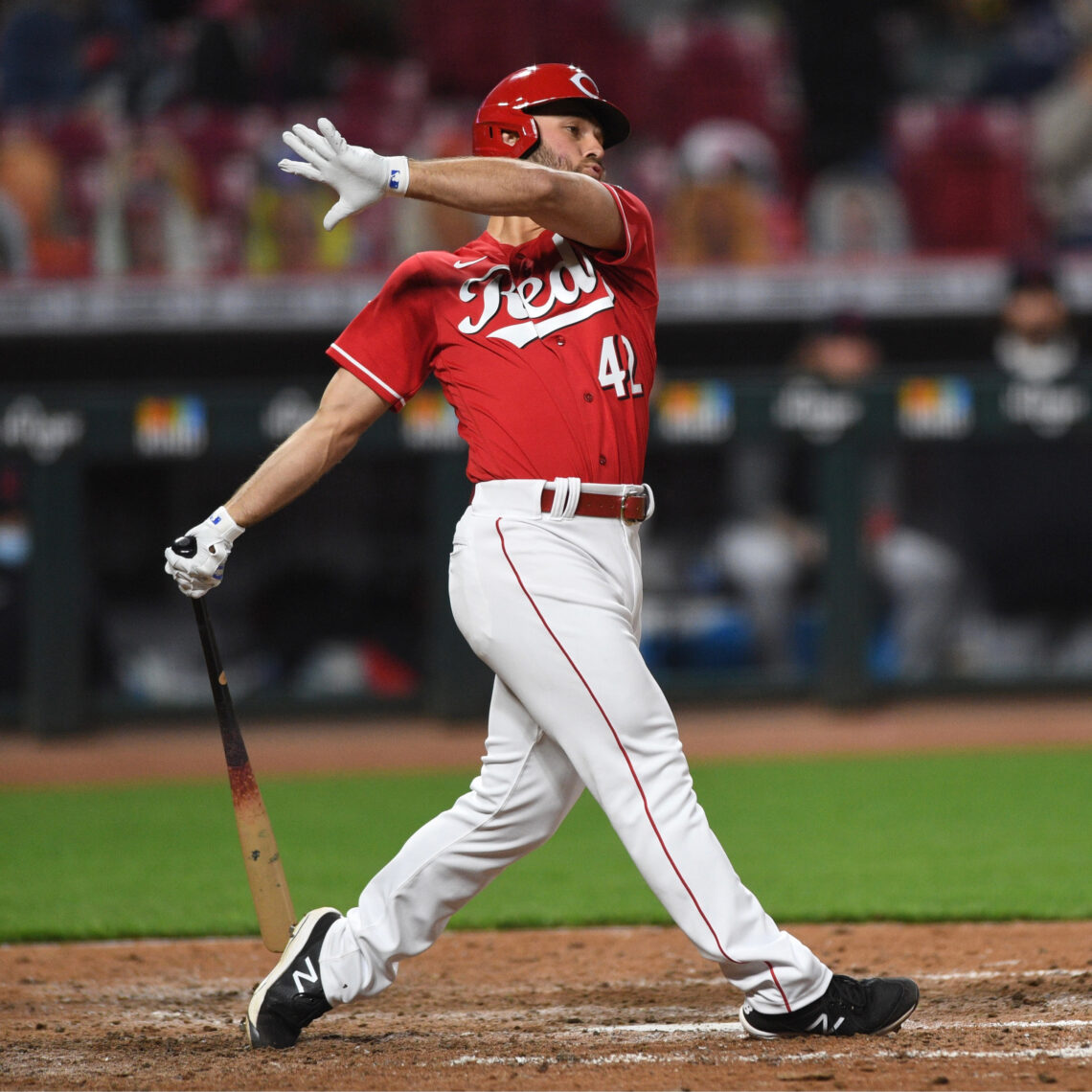 The Reds put together a great team win Sunday afternoon. The headline is Max Schrock stepping in for the red-hot Joey Votto on his day off and putting together an impressive five-hit game, including a home run. Vladimir Gutiérrez didn’t give up a hit until two outs in the fifth and the bullpen provided two perfect innings of relief. With the 7-1 win, the Reds take the series and end the road trip with a 5-2 record.

Marcus Stroman started the game for the Mets, picking up right where he left off in his last outing against the Reds and retiring the first four batters before Max Schrock drove a line-drive single into left-center with one out in the second inning. Schrock was ultimately stranded after a groundout and flyout ended the inning.

After Jonathan India was left at second base from a double off the base of the wall in right-center field in the third inning, the Reds finally got one on Stroman in the fourth. With two outs, Schrock came back to the plate and pulled a line-drive to right field, clearing the fence for a home run (103.7 mph 375 feet) to put the Reds up 1-0.

Eugenio Suárez followed with a 106.2 mph line-drive single off a jumping Javy Báez’s glove, and Tyler Naquin then shot a double into the left-center field gap that rolled all the way to the wall. Suárez tried to come around all the way from first, but a good relay through Baez nailed him at the plate to end the inning.

After a 1-2-3 fifth inning, Jesse Winker hit a grounder past the first-base bag. Hustling out of the box, Winker was able to take advantage of the awkward bounce off the wall in right field and stretch it into a double. Kyle Farmer followed driving a ball into center field just past the outstretched glove of a diving Kevin Pillar. Winker was waved in and Farmer hustled all the way around to third for a triple.

Tyler Stephenson then delivered a flyball down the right field line that was plenty deep enough to score Farmer from third to extend the lead to 3-0. Schrock continued his great afternoon with a single for his third hit of the day. Naquin then worked a full count, and on the 3-2 pitch, Stroman missed in the dirt and bounced the ball to the backstop. Running on the pitch, Schrock was able to move to third on the walk, and Stroman’s afternoon came to a close. Aristides Aquino worked a walk to load the bases, bringing Vladimir Gutiérrez to the plate. The Reds pitcher was issued a four-pitch walk for his first major league RBI. Miguel Castro finally started finding the zone and struck India out swinging to end the threat.

The Reds got runners to second in both the seventh and eighth with two outs but were unable to push any across. However, they added some insurance in the ninth. After a walk to Winker and a dropped line drive that turned into a fielder’s choice for Farmer, Stephenson also walked. Schrock came to the plate and hit a groundball through the left side for his fifth hit of the game, scoring Farmer from second. After another walk to Suárez loaded the bases, Naquin roped a double down the right field line, scoring Stephenson and Schrock to extend the lead to 7-1.

Vladimir Gutiérrez mixed speeds and locations between his fastball, changeup, and slider to keep the Mets off balance for the most part throughout his seven innings. While Gutiérrez gave up a couple of walks and hard-hit balls, he was largely efficient in the outing, only throwing 80 pitches through seven innings and scattering four strikeouts.

After retiring the first five batters he faced, including striking out Jeff McNeil to open the bottom of the first, Brandon Drury walked on five pitches but was stranded at first base. Following the walk to Drury, Gutiérrez retired the next nine hitters. With two outs in the fifth, we were still on no-hit watch when Kevin Pillar hit a ground ball with only an 80.8 mph exit velocity just past the diving Suárez for the Mets’ second baserunner of the day. A lineout to Farmer at short would end the fifth inning.

The Mets got to Gutiérrez in the sixth. With one out, Jeff McNeil crushed a slider for a solo home run to center (102.3 mph 409 feet). Gutiérrez worked through the rest of the inning, only giving up a single without any further damage.

The seventh started with a five-pitch walk to Michael Conforto, but was another efficient inning for the rookie. Gutiérrez rolled Drury into a 5-4-3 double play then struck out Kevin Pillar on a nice changeup to end his afternoon.

Mychal Givens came on in relief in the eighth, inducing three straight groundouts to keep the score at 4-1.

Justin Wilson pitched a clean ninth inning including a strikeout.

The Reds will have an off day tomorrow before a two-game series against the Minnesota Twins. Tuesday, Tyler Mahle will face Kenta Maeda at Great American Ball Park with the First pitch scheduled for 7:10 p.m. EST

Today’s game was the exact opposite of what I expected. I predicted Mets 7, Reds 1, for example. Bizarro World can be sweet.

Enough has been said, on other forums, about Bell’s astonishing decision to take the ball way from Hembree and give it to Doolittle to get the final out. But I can’t help but add my take on this forum.

Steve has pointed out a bias that Krall (and perhaps others in Reds management/ownership) have toward Doolittle as the only bullpen acquisition of the offseason. I support Bell but last night he picked a very bad time to show off Doolittle’s veteran “clutchness”. Doolittle’s job is in jeopardy and I suspect that played into Bell’s decision, perhaps not even at a conscious level.

Doolittle sure knew what was at stake, throwing 97+ mph fastballs, imagine how much adrenalin that took. He was actually making good pitches, and if the fatal curveball just dipped a few more inches, Smith would have struck out.

But as Joey experienced, baseball often comes down to a few inches.