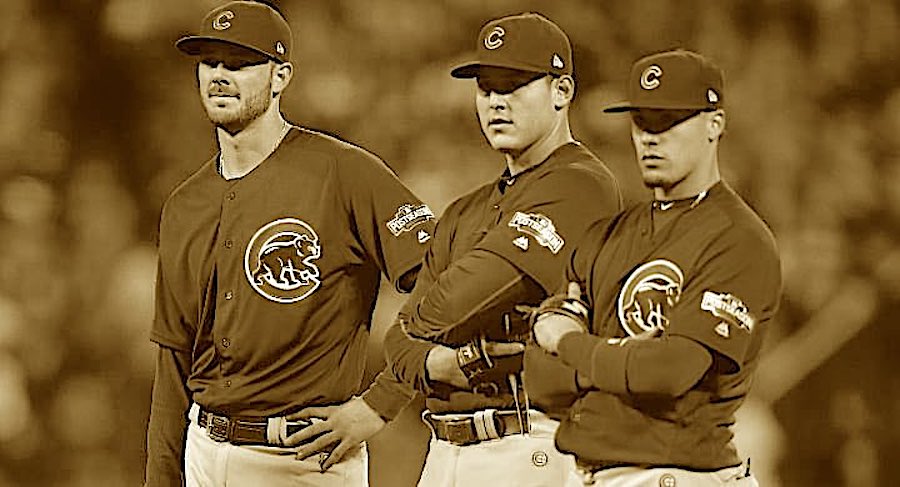 [This is a version of an article that appeared this morning in our daily Reds newsletter MORNING SPIN.]

A hot, humid July coming to an end. David Bell’s crew leaving Wrigley Field having won the final three of a four-game series.

But that group of Cubs players remained ever capable of tormenting the Reds as they had done for half a decade. Kris Bryant beat the stuffing out of the baseball. Anthony Rizzo leaned over the plate and blasted home runs. Wilsson Contreras called a smart game and threw out runners. Javy Baez played slick defense. And when the situation was right, Craig Kimbrel closed out the game.

All this good baseball, still played in Chicago Cubs uniforms.

Just two months earlier, those Cubs were in first place, riding high in the NL Central. Hopeful, off-key renditions of “Go Cubs, Go” wafted from Wrigley out to The Drive, to the well-to-do burbs of Winnetka and Northbrook, south to Lincoln Park.

That must seem a goat’s lifetime ago for Cubs fans.

As it turns out, that sticky night Baez hit a routine fly ball off Amir Garrett, but celebrated like he’d won the Illinois Lottery, came just hours before the sudden and definitive end for those Cubs. It was an all-too fitting good-bye for that core group that broke the curse and won the 2016 World Series, but fell far short of its presumed destiny to win a few more.

The Reds outscored Baez’s Cubbies 22-10 the next three.

Then the 2021 trade deadline struck its midnight. The Cubs front office performed a different version of “Go Cubs, Go,” taking a sledgehammer to every last cornerstone of its major league roster.

They traded former MVP runner-up Baez to the Mets, former MVP Bryant to the Giants, and former Rookie of the Year Kimbrel to the hated cross-town rival White Sox. Their signature slugger, Anthony Rizzo, is now playing in pinstripes of a different color. Also shuttled off the Friendly Confines were outfielder Jake Marisnick and relief pitchers Trevor Williams, Andrew Chafin and Ryan Tepera.

The team’s stadium may be named for a guy who made his fortune manufacturing and selling gum, but Cubs fans are rightly finding this particular flavor of cost-savings for the billionaire Ricketts Family hard to chew.

So as David Ross’s team stops in at Great American Ball Park this week to play three, they will have lost 11 in a row (outscored by 49 runs) and 12 of 14 since the previous Reds series. The Cubs have fallen from the intoxicating heights of first place to 16 games below .500 and 20.5 games behind the Milwaukee Brewers.

All right. That’s enough of the tacky (but glorious) gloating.

More relevant now are the players who will take the field for the Chicago Cubs tonight. Surely the bloodletting has replenished the Cubs lineup with a bunch of young, exciting upside players. Right? Hmm.

Those numbers in parenthesis aren’t top-5o prospect ratings. They are player ages. The current Cubs team is even older than the unit the Reds will send onto the field tonight.

How about the Cubs pitching rotation?

They’ve announced starters for Monday (Justin Steele) and Tuesday (Kyle Hendricks). Wednesday is TBA. Zach Davies and Alec Mills still pitch for the Cubs and are the only other names listed in the Cubs FanGraphs depth chart. But Davies and Mills started on Saturday and Sunday respectively and won’t be available by Wednesday.

Who will close games?

Looks like a combination of Rowan Wick, Codi Heuer and Manuel Rodriguez, all right-handers. But it’s hard to discern a pecking order lately since, you know, they’ve lost 11 straight games. The first criteria for earning a save is your team has to win the game. The Cubs haven’t recorded a save since August 4. In terms of lefty bullpen specialists, Rex Brothers still lurks for showdowns with Joey Votto.

So let’s take a look at Justin Steele, the Cubs starter tonight.

Start with the basic stuff. Justin Steele is 26 years old and he will no-hit the Reds as long as he can stay in the game since he’s a lefty starter.

Steele has come up through the Cubs system as a starter except for 2021. He began this season in AAA but was called up to the Cubs in mid-April. Steele pitched in the Cubs bullpen – even against the Reds twice in late April/early May (more on that later). After 11 relief appearances, Steele hit the IL with a hamstring injury. He rehabbed and stayed with the Iowa Cubs until he was recalled to the major league team on August 10 – last Tuesday.

On that day, he made his lone 2021 major league start. It was against the Brewers in the first game of a double-header. The Brewers won 4-2 and Steele allowed three runs in five innings. He gave up a solo home run to stupid Willy Adames and two batters later a 2-run shot to Avisail Garcia. Steele struck out one batter and walked one. From the pitches I scouted, it looked like he got away with a lot in the center of the zone.

Did I mention Steele is a lefty and therefore destined to no-hit the Reds?

Justin Steele is fastball first – 65% of the time. Statcast divides that into a four-seamer (43%) and sinker/two-seamer (22%). Both come in a little bit above league average but not quite 94 mph.

Steele’s second pitch is a sharp-breaking slider (24%) which he throws to both sides of the plate against right-handed batters and away from lefties. He grooved several to the Brewers, including the pitch Adames hit into the Wrigley basket. There’s also a curve from Steele once in a while (9%). He threw four changeups against the Brewers, one of which Garcia turned into pixie dust.

Back to those two games Steele pitched against the Reds earlier this year. Both appearances came in relief, three innings total. He struck out six and walking none.

In the first game, Steele pitched two innings with the Reds already ahead 8-2. He struck out five batters – all on fastballs – in two innings.

But a couple days later, Steele came in to pitch the 7th inning in a game the Reds were ahead by one run, 9-8. This time, David Bell’s guys were ready for Justin Steele’s fastball. Tucker Barnhart took him deep.

So did Nick Castellanos.

It’s all well and good to poke fun at the Cubs. They’ve undertaken a massive transition. Their lineup is full of unfamiliar and unproven names.

But the baby bears are still a professional ball team. One the Reds have to beat every game they play.

The Brewers showed the way. They didn’t take the New Cubs lightly and pounded without remorse. That’s what the Reds need to do.

Yes, Reds, put the pedal down hard and drive fast tonight! Every win is important, every loss difficult as the August calendar leaves fall to the floor during a playoff chase.

I also admire the Cubs’ decisiveness. Out of the race a and have a set of players unsigned for future years? Trade them. All. To the highest bidder, whether a bitter rival or not. Their gusto sets them up for a faster rebuild than most teams. And they will have a ton of payroll available to sign strong assets and compete within the next couple of years.

Justin Steele actually looked pretty good. Yes, he made mistakes to India and Aquino and those two balls traveled a combined 38 miles. But he showed a nice mix of pitches, hit some edges, and didn’t look intimidated. I suspect he’ll be so,I’d for the Cubs as he continues to mature in the majors. But on a related note, this game also shows why a balance of effective right and left handed hitters is so important. Against a decent lefty, it was the right handed batters that won this game for the Reds (along with Wade Miley of course). Against Zack Wheeler in Philly Votto’s home run from the left side jump started the Reds. This is all obvious I know, but I’m not convinced it’s obvious to the front office and manager of the Reds. Barrero must play. Suarez and Moustakas should not. Naquin and Farmer are not as good as management seems to think. Play your best team, keep a balance of good hitters from both sides, win more games! Okay, I’m done restating the obvious. Go Reds!

Reds lose series to Cubs, manage only a run in 7-1 loss – Reds Content Plus

[…] the San Diego Padres, have the hardest remaining schedule in the league. The “new” Cubs would be the perfect team to play to make up more ground in the playoff […]