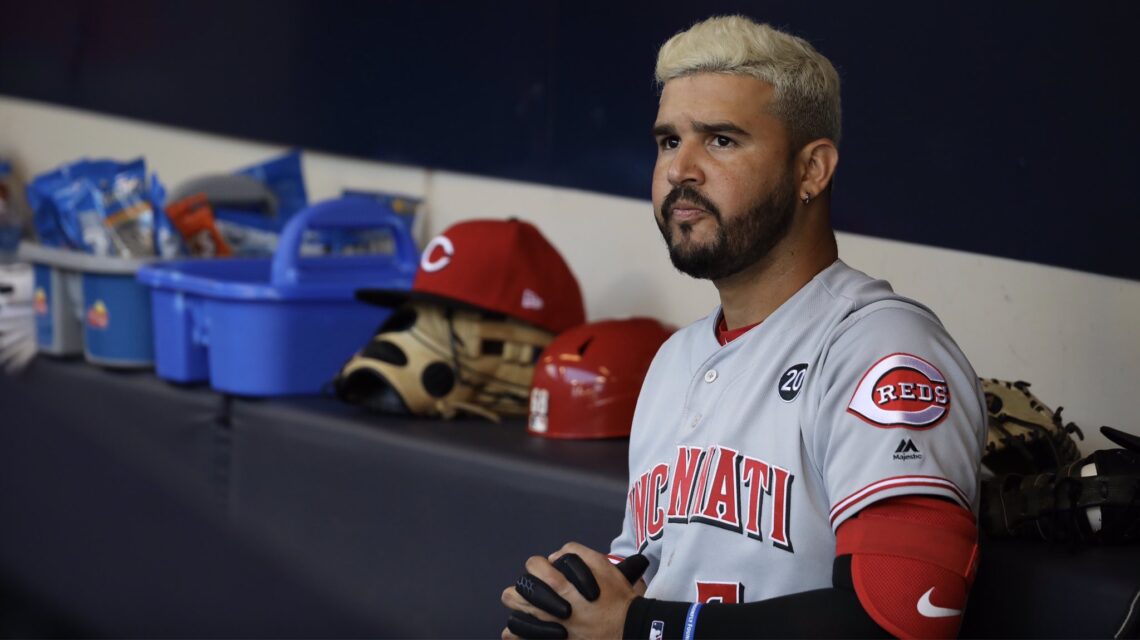 The Reds’ offense is the engine that has powered them to a winning season and put them in position to make the playoffs for a second straight year. Among all 30 major league teams, here’s where they rank in a plethora of areas:

But the Reds’ lineup has one glaring weakness: the ability to hit left-handed pitching.

Take a look at the stark contrast in the performance against righties and lefties: 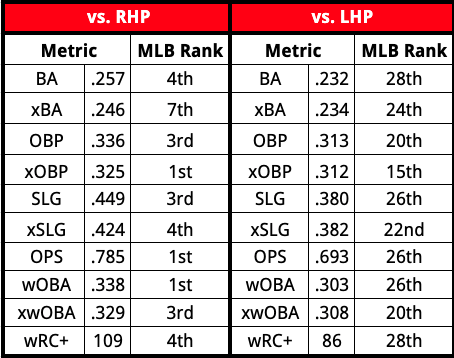 Almost any way we slice it, the Reds are one of the best teams in baseball against right-handers and one of the worst against southpaws.

In fact, if we look at the comprehensive offensive stats — wOBA and wRC+ — no team in baseball has a larger discrepancy in production based on pitcher handedness than the Reds.

How can a team so good against pitchers who throw with one arm be so bad versus pitchers who use the opposite arm?

We can try to point at factors like batting average on balls in play. The Reds do have a sizable gap between their BABIP against lefties (.285) and righties (.307). But at the end of the day, the answer largely comes down to roster construction by the front office and underperformance by certain players.

This problem isn’t anything new for the Reds. It existed last year, although it was easier to miss because the team wasn’t great against right-handed pitching (96 wRC+) either. Make no mistake, though: they were abysmal against lefties (78 wRC+). Only four players were above-average hitters versus southpaws in 2020. Two of them, Curt Casali and Matt Davidson, are no longer with the organization. For those curious, the other two were Kyle Farmer and Jesse Winker.

What did the Reds do to address the problem? A whole lot of nothing. Ownership slashed payroll, and the team’s only major-league signing in free agency was reliever Sean Doolittle. The only right-handed hitters added to the 40-man roster were Scott Heineman and Deivy Grullón. Both are already out of the organization.

The roster was not built for success against left-handed pitching, and even the emergence of Jonathan India and Tyler Stephenson hasn’t been enough to close the gap.

Here are the career numbers for each Reds hitter coming into the season: 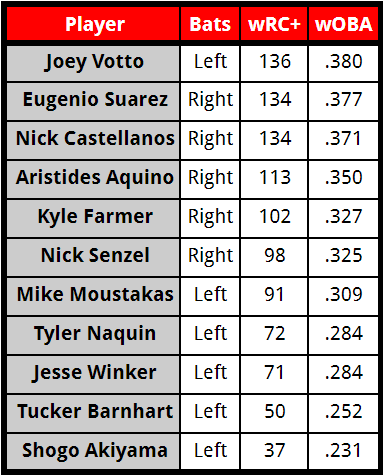 Less than half of the team’s position players have been above average hitters against lefties in their careers. With so few right-handed hitters, that’s not particularly surprising. And this doesn’t account for Joey Votto’s decline versus southpaws in recent years. Between 2019 and 2020, Votto hit .228/.350/.310 with an 82 wRC+ and .302 wOBA with lefties on the mound. Even in his career renaissance in 2021, right-handers have largely been the ones paying the price.

Most likely, the Reds were banking on Nick Castellanos and Eugenio Suárez bouncing back to their career norms against lefties, Jesse Winker continuing his progress against southpaws in 2020 (148 wRC+), and Nick Senzel staying healthy. Castellanos has raked, but the other hopes haven’t come to fruition.

Here are the 2021 numbers against lefties: 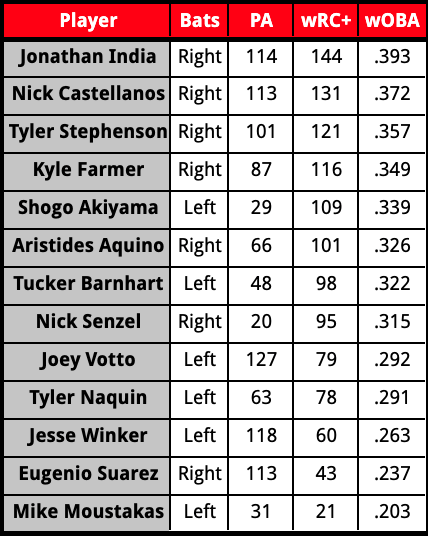 Only six of the 13 position players listed here are above average against southpaws. Even two of the better hitters on the list have major red flags due to small samples. Shogo Akiyama has been better against lefties, but he’s had less than 30 plate appearances against them. Winker’s 2020 numbers show the danger of buying into small samples. Tucker Barnhart has hit better now that he’s ditched switch-hitting, but again, small sample. Stephenson has rightfully received most of the playing time when opponents start lefties.

Aside from Suárez’s stunning decline, are there really any surprises here? Most of the lineup has performed in line with their career averages, or at least in line with their performance over the last few years. If Suárez was hitting even close to his career norm, the story may look quite a bit different. But after mashing lefties for most of his career, he’s looked lost against them in 2021.

Maybe the expected metrics tell a better story that could give some hope for improvement? If only it were so. While they’re slightly better than the actual numbers overall, it’s tough to say they’re encouraging. 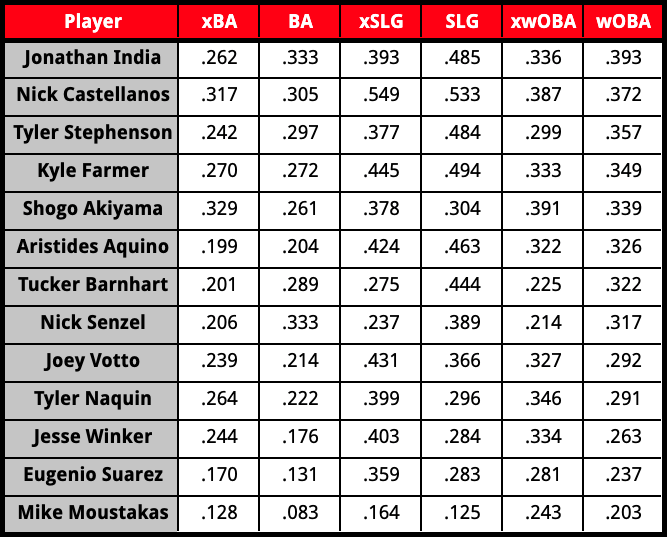 On one hand, Tyler Naquin, Akiyama, and Winker have underperformed based on the batted ball data. On the other, India, Stephenson, Barnhart, and Senzel have significantly overperformed. And then there’s Suárez and Mike Moustakas, who have been dismal against left-handers from any angle we look at it.

After failing to address the weakness in the offseason, the Reds front office had a chance to rectify the issue before the trade deadline.

The Reds ultimately acquired three relievers — Mychal Givens, Luis Cessa, and Justin Wilson — two days before the deadline, providing some hope that there were more moves to come.

We knew we wanted to add some relievers. That was our first and foremost goal. We ended up doing that at the beginning of the week. So, we actually got our deals done on, I guess, Tuesday and into Wednesday. So, the last couple of days were a little bit — I don’t want to say ‘relaxed’ because it definitely was not that — but we had a lot of phone calls, a lot of things we could’ve done and we just weren’t prepared to do them based on prospects or finances or whatever.

The Athletic’s Ken Rosenthal reported that the Reds at least looked into a big right-handed bat in Kris Bryant, who would’ve been a tremendous boost. Among 181 qualified hitters, Bryant has the 10th best wRC+ (164) against left-handed pitchers in 2021. Based on Rosenthal’s report, it seems part of the reason the trade didn’t get off the ground was because the Reds didn’t want to pay the $7 million still owed to Bryant the rest of the season. Sigh.

Bryant, of course, was ultimately dealt to the San Francisco for a modest return, the Giants’ No. 7 and No. 17 prospects, per Baseball America.

Still, the Reds could’ve improved the club by adding a right-handed hitter even if he wasn’t necessarily a star like Bryant, Trea Turner, or Starling Marte. Here were some of the players traded last month, along with their their 2021 and career wRC+ against southpaws:

Were any of these players perfect fits for the Reds? No. The point is there were options available that would’ve 1.) helped address the problem versus left-handed pitchers and 2.) come at a fairly minimal prospect and financial cost.

The Reds have since added Asdrúbal Cabrera via waivers, who has hit lefties well the last two seasons but has below-average expected stats.

Coming into the season, the Reds needed a lot to go right if they were going to improve against left-handed pitching. The roster, which struggled against lefties in 2020, was virtually the same. Some factors have played in their favor, such as Castellanos rebounding to his career numbers and the emergence of the rookies. But that hasn’t been enough to tip the scales in a positive direction.

Barring a sudden resurgence from Suárez or another surprise waiver claim, the Reds are who they are against left-handed pitchers. There’s no cavalry on the way. Senzel may or may not return this season to give the team a boost. José Barrero could return in September when the rosters expand, but the team hasn’t been willing to play him over Kyle Farmer — who has hit lefties well, to his credit — or Suárez.

If the Reds make the playoffs, they’ll almost certainly have to play in the Wild Card game against the Dodgers or Giants. Both teams have right-handed aces: Kevin Gausman for the Giants and Max Scherzer or Walker Buehler for the Dodgers. Could you blame Dave Roberts or Gabe Kapler, though, for starting Clayton Kershaw, Julio Urías, or Alex Wood in a Wild Card game against the Reds?

The Reds certainly have weaknesses beyond left-handed pitching that could doom them (see: bullpen, defense, baserunning), but the problem becomes quite glaring when they’re shut down by pitchers such as Jesús Luzardo, Drew Smyly, Brett Anderson, and Matt Moore consistently.

Terrific (but depressing) work Matt. There’s such a glaring offensive hole at 3B right now I’m still dumbfounded that Suarez, Moustakas and Cabrera are playing ahead of Barrero. But gut feeling aside and to the point of this article, how has Barrero fared against lefties in the minors? Surely his WRC+ is higher than 43, right?

Thanks for reading! Barrero has hit quite a bit better against RHP this year (.957 OPS), but he’s still above average against lefties (.758 OPS).