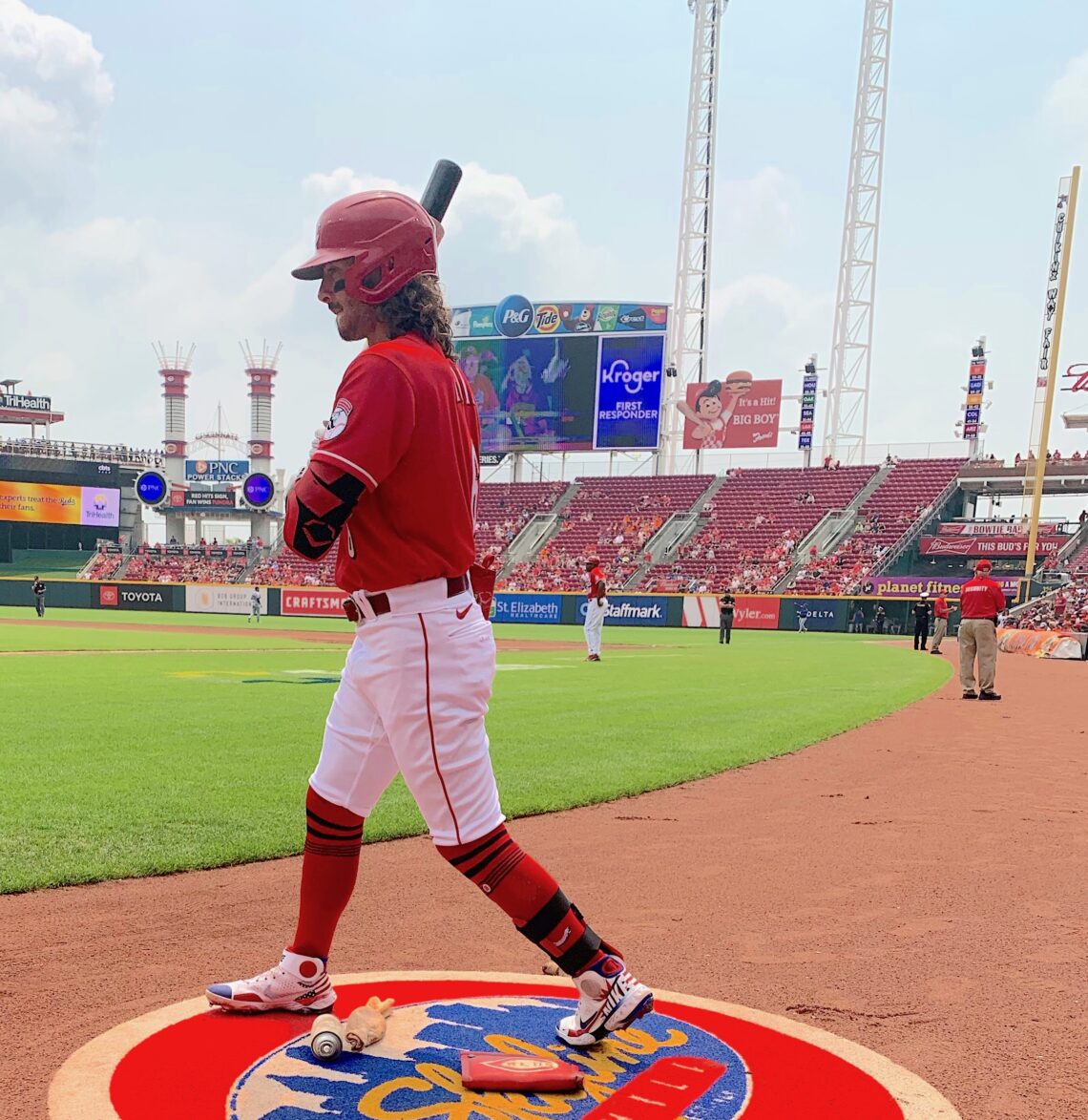 Jonathan India’s rookie season – borne of front office failure, heralded by a mammoth home run and ending with a jam-packed trophy case – was glorious to behold.

The second baseman became the eighth Reds player to win NL Rookie of the Year, joining Frank Robinson (1956), Pete Rose (1963), Johnny Bench (1968) and four others. India was the runaway choice of the Baseball Writer Association of America, earning 29 of 30 first-place votes cast.

But India’s acclaimed and fascinating season didn’t unfold in anything like a straight line.

In what amounts to textbook irony, were it not for the plain ineptitude of the Reds owners and front office, Jonathan India’s fabulous season might not have occurred at all.

Last October, as the Reds front office turned its attention from the club’s sputtering postseason finish in Atlanta to building the 2021 team, India was wholly absent from their Opening Day plans. General Manager Nick Krall, who had taken over after the abrupt resignation of Dick Williams, indicated as much as he identified signing a free agent shortstop as the team’s number one offseason priority.

Had Krall acquired a shortstop, India wouldn’t have gotten a serious look in spring training. Veterans Eugenio Suarez, Mike Moustakas and Joey Votto – each with eight-figure contracts – were locks for third, second and first, respectively. Adding a new free agent at short to the mix would have consigned India to a big-league bench role at best.

The Fort Lauderdale native had spent the entire 2020 season at the Reds alternate site at Prasco Park. While there had been reports of his improvement, an injury slowed his progress and the odd roster situation prevented his breakthrough to the majors.

But as Reds observers know, Krall swung and missed in the shortstop market.

Even then, India remained a long shot. The Reds tried out a parade of other candidates for shortstop. Alex Blandino got a look. So did the two Kyles – Farmer and Holder. Remember Dee Strange-Gordon, Barry Larkin’s workout buddy? They all got a chance of becoming the Reds shortstop. None won the job. Meanwhile, David Bell had been playing Jonathan India at second and third.

As spring training neared its half-way point, the Reds were desperate. Despite his severe defensive shortcomings, they asked Suarez to move back to his old position at short. Conventional wisdom held that Suarez could play passable defense and his bat – big, compared to Blandino, Strange-Gordon and the Kyles – would make up for the difference in the field. The move would also allow Moustakas to move back to third base, where he was much better suited.

But the truth is, by mid-March, the emergence of Jonathan India had dictated the Suarez move. I wrote this on March 15:

“So, here are the factors behind Bell’s announcement tonight that he’s moving Suarez to shortstop. The inadequacy of the other shortstop solutions. The weight loss by Suarez. The versatility of Moustakas. But while those are all necessary conditions for Bell’s high stakes tryout of Suarez, they aren’t what precipitated it.

That factor would be the emergence of Jonathan India.

The 24-year-old is now fully healthy. He spent a year in splendid exile at Prasco Park dedicated to improving his game and by all accounts succeeded. He’s showing it in Phoenix.

Jonathan India has made contact, taken walks, hit for power, run the bases and fielded his position like you hope the number five pick of the draft would. On top of all that is the young Floridian’s toughness and drive. Reds’ broadcaster and former big leaguer Chris Welsh speaks of those qualities every chance he gets. Remember that Welsh talks to the guys inside the organization and clubhouse.

No, David Bell hasn’t announced India is the Reds second baseman. The public line will be there’s an “open competition” for the job. Kyle Farmer, Dee Strange-Gordon and Alex Blandino will get a look and consideration. A couple may even make the Opening Day roster ticketed for a bit of playing time at 2B.

But make no mistake. The Suarez move is about Jonathan India becoming the Reds second baseman.”

Against the odds and contrary to the club’s intentions, India had kicked down the door and forced his way into the Reds plans.

It was a prodigious home run that had turned heads.

The (Other) Home Run

Most Reds fans first noticed Jonathan India because of a home run he hit in college.

It was the spring of 2018 and a short-haired India was playing third for the Florida Gators. In a big series against Auburn, India blasted a home run off Casey Mize. Mize was an All-American and destined to be the #1 pick in the draft a few weeks later.

The words “big-time match up” had just escaped the broadcaster’s mouth when India drilled a Mize cutter into the left field bleachers. Scouts noticed. A couple months later, the Reds chose India with the fifth pick of the 2018 draft.

But that’s not the home run that catapulted India into the Reds Opening Day lineup.

Last March 5, now hitting with a wooden bat and facing a major league pitcher, Jonathan India knocked a ball clear out of Goodyear Park – to the opposite field.

India had announced his arrive less than a week after spring training games had commenced.

With the fateful Suarez experiment at shortstop ongoing, Jonathan India would go on to win the Reds second-base job. David Bell would pencil India’s name into the Opening Day starting lineup, batting seventh.

A Season in Three Parts

Analyzing baseball players using arbitrary endpoints like month-by-month is easy, but fraught with huge error potential. Not only is monthly data a small sample size, but the turning of a calendar page is a meaningless variable. Skepticism is also warranted when an analyst selects certain dates to highlight “before-after” trends. You can tell almost any story you want about a player by cherry picking the right dates.

Meaningful player analysis starts by identifying important factors that changed on a specific date or time of the season. Did the pitcher alter his delivery or pitch mix? Did a batter tweak his stance or approach? Did he give up switch hitting?

Here’s a chart of India’s vital hitting results from those three segments of 2021:

Prior to June 5, manager David Bell never had India higher than sixth in the Reds lineup. India’s place in the batting order was spread across sixth, seventh and eighth. Bell started the season with Jesse Winker batting leadoff. When Winker missed early games, Tyler Naquin hit first. Eventually, Bell looked for a right-handed hitter to lead off and turned to Nick Senzel in early May, with Winker batting second.

The Senzel plan worked until he got hurt. After that Bell went back to Winker in the leadoff spot for a while. At the end of May, Bell put Suarez at the top of the order to see if that would jumpstart the Reds third baseman at the plate. The Suarez Era lasted nine games.

June 5: India Moves to Lead Off

On Saturday, June 5, Jonathan India’s name appeared first on Bell’s lineup card. At that time, India wasn’t a strong candidate to lead off. He did have a nice walk-rate well above 10%. But his batting average had been inflated early by extreme luck on balls in play and that had settled down. His xBA had fallen to .223. India was hitting with so-so power. He was a league-average batter.

But something about batting first clicked with India and his approach. Over his next 150 plate appearances, his walk-rate soared to 15.5%. He cut his swing rate from 42% to 38% and his chase rate from 26% to 24%. India hit the ball better, raising his xBA to .274, more than 3o points above league average. India’s power dipped a little bit. He was hitting the ball hard, but as we see in the second chart India was hitting ground balls and line drives. 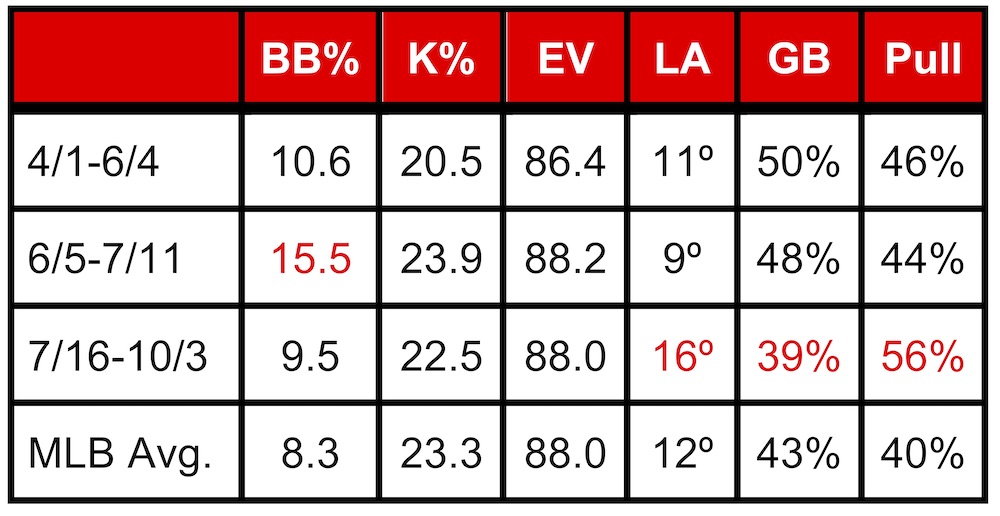 It’s clear that Jonathan India used the All-Star break to rethink his approach. He had added a toe-tap to his batting approach at the end of May, but it hadn’t paid dividends in one important area – power.

After the All-Star break, India focused more on hitting for power. He elevated his launch angle from below average to well above, a change that’s also reflected in his lower ground-ball rate. India also pulled the ball more.

Individual swings don’t represent all plate appearances. But they’re fun to look at. Here’s an India swing before the All-Star break (June 20). Note how level it is.

Here’s an example after the break (August 12), where India is swinging to lift the ball in the air.

Those changes produced a huge power spike. India’s ISO (isolated power) doubled from his month-plus leading off before the break. His home run pace over 600 plate appearances rocketed from eight to 30.

It’s also interesting to look at what didn’t change. India didn’t hit the ball harder overall. His average exit velocity (EV) didn’t increase. Neither did his strikeout rate. His expected batting average, swing-rate and chase-rate stayed about the same. His post-break power was a product of getting the ball in the air and pulling it.

India’s focus on power did come at the expense of walks. His walk-rate fell from 15.5% to 9.5%. Note: The lower number there is still above league average. But that decline in walks is significant. Even with all the extra power, India’s xwOBA was a bit higher during the month before the ASG than afterward.

The 2021 Reds had a winning record over a 162-game season for the first time since 2013. But expectations for most fans were even higher, so to them the campaign overall was a disappointment.

But Jonathan India’s rookie performance ranks at the top. His combination of talent, passion and toughness provided countless thrills for Reds fans, not to mention a glimmer of hope.

It was a surprising season worthy of every accolade it receives.