After an embarrassing loss to the Pirates (54-75) on Saturday evening, the Reds (60-68) will try to avoid a sweep at the hands of a last-place team. The Pirates entered this series 8-30 since the All-Star break, but the Reds came out lifeless last night in their opportunity to get back in the series. The playoff chances are virtually nonexistent now (0.6%).

Trevor Bauer has alternated between bad and good starts since joining the Reds. His last outing was strong (7 IP, 11 K, 2 ER), so let’s hope he breaks the pattern today.

Bauer typically throws his four-seamer 37.4% of the time, but he featured it on nearly of his pitches against the Padres on Monday. The theme: throwing up in the zone — a smart approach with a high-spin fastball. Bauer’s wide-ranging pitch arsenal lets him tailor his approach to the team he’s facing. He may use a similar approach today. The Padres rank 22nd in baseball with a .277 xwOBA against high four-seamers (defined as zones 1, 2, 3, 11, 12, 13, 21, 22, and 23 in Statcast’s Attack Zones). The Pirates are 26th (.266).

If anything can break the Reds out of their offensive funk, it’s a matchup against Dario Agrazal. The right-hander has an ERA on par with Bauer, but his peripherals are alarming. His FIP and xFIP are over two runs higher than his ERA, and the SIERA isn’t far behind. With a sinker-heavy approach — a pitch most pitchers are moving away from — he has an abysmal strikeout rate. The sinker approach has gotten him into trouble because he has struggled to generate ground balls. 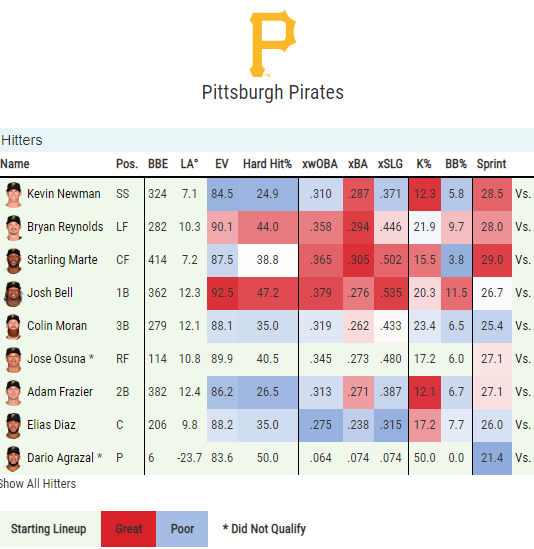 Not exactly an inspiring lineup today. Nick Senzel sits out for a second straight day as he works through struggles at the plate. Phillip Ervin once again mans center field.

Curt Casali makes his first start since he was activated off the injured list on Saturday. He appeared as a pinch-hitter in last night’s loss. He had been out since July 15.

Joey Votto and Jesse Winker remain out as the offense looks for a spark of life, although the former could return this week. 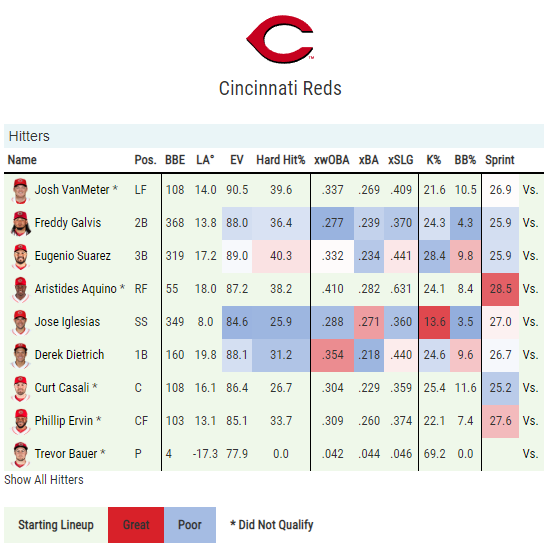