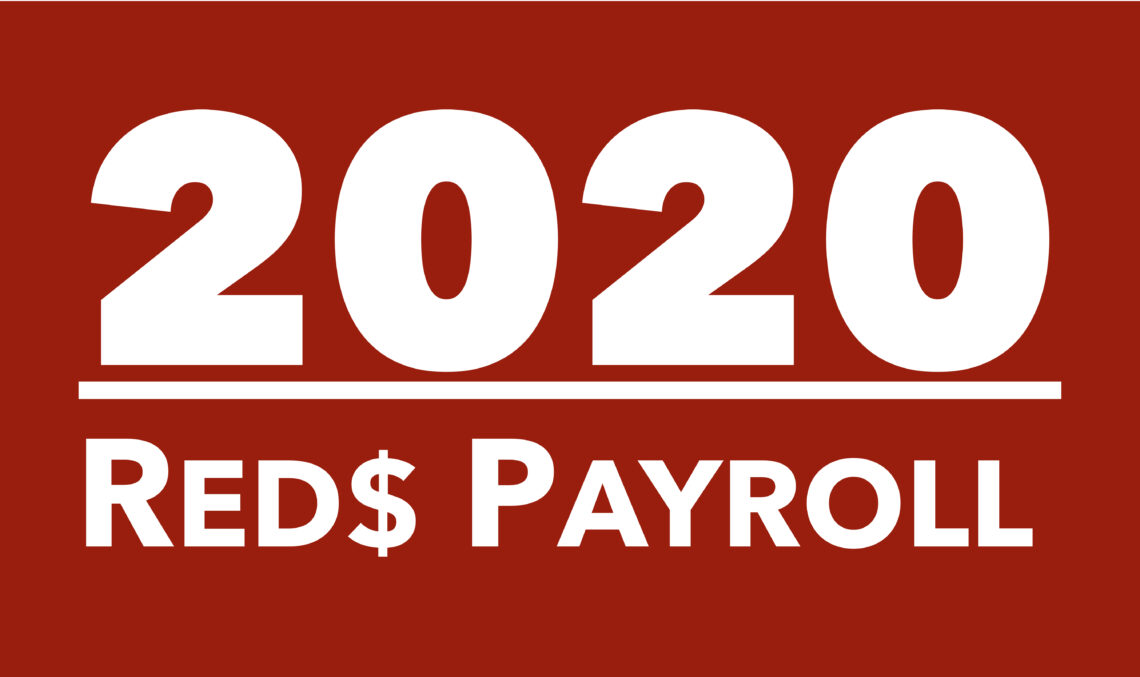 My early look in August at the Reds payroll situation for 2020 generated a baseline roster comprised of players already in the organization. The purpose was to estimate how much money the Reds front office would have to acquire new players. Here was the conclusion:

This projection of payroll for our Baseline Roster is $113-4 million. That payroll fills the 26-man active roster with known Reds players. It assumes regular arbitration raises and current contract commitments. Without Gausman, Galvis and Peraza, the number falls to $95-97 million.

Last season, the Reds bumped payroll from $101 million to $127 million. They continued to add late in the season, taking on the contracts of Kevin Gausman and Freddie Galvis.

Dick Williams made good news recently when he revealed Reds payroll will continue to climb: ” … directionally, we are going to continue to build and invest in this team and have more financial resources available for us. Our payroll will be bigger this year.”

How much more we don’t know. Reds beat writer John Fay guessed $140 million. Reds ownership can afford that. While Fay’s number might be right, or end up being low, my best guess would be around $135 million.

We Have New Arbitration Estimates

This afternoon, Tim Dierkes at MLB Trade Rumors published his site’s estimates for arbitration salaries for each team. My previous post was based on broad guesswork for the Reds players who fall into the arbitration category. The MLBTR estimates are much better. Here is what they project, with my previous guesses in parentheses.

The new MLBTR estimates are $2.7 million higher than my August guesses.

We Know More About Gausman

The Reds acquired Kevin Gausman from the Atlanta Braves off waivers in early August. Gausman had been a starter through most of his career in Baltimore and Atlanta. Gausman pitched well for the Reds, but as a reliever: 3.10 ERA, 2.72 FIP, 2.42 xFIP, 33% strikeouts, 6% walks over 20.1 innings.

Gausman has a two-pitch portfolio. His four-seam fastball and split-finger comprised more than 96 percent of his pitches this year. A strong case can be made he is best suited to face batters once time, as a reliever.

Despite that, there’s been a bit of chatter on Reds broadcasts that the team might look at Gausman as a possible starter. I kind of doubt it. His performance split between starter and reliever is stark. The Reds gave him one start in September and Gausman surrendered three runs in two innings.

But Kevin Gausman is in a strange salary situation. A good season with the Orioles and Super Two status bumped his arbitration-based 2o19 salary to $9.4 million. The Reds aren’t going to pay Gausman the $10 million he would earn through another round of arbitration.

You might think the arbitration award could be less if the Reds stipulated Gausman would be used as a reliever. But the Collective Bargaining Agreement says that players can’t receive more than a 20% cut in salary in any subsequent arbitration. There is no flexibility to accommodate a change in roles, say from a starting pitcher to reliever. To circumvent that trap, the Reds and Kevin Gausman would have to reach an agreement prior to the arbitration process.

The Reds could offer Gausman something like $8-9 million over two seasons. He’s a promising reliever, but not proven over a long enough period of time to pay him much more than that. But it takes both parties to agree. Gausman may not be resigned to the bullpen. If he wants to be starter and paid like one, he’d turn down that type of pre-arbitration offer, the Reds would non-tender him and Gausman would become a free agent. He could sign with another club that would use him as a starter. But with Gausman’s recent track record (remember, he was cut loose by Atlanta), it’s hard to see another club doing that.

So Kevin Gausman might take a guaranteed two-year deal, maybe with a few incentives thrown in. Gausman could help the Reds 2020 bullpen, but only at a reasonable price compared to other relievers on the market.

We Know More About Jose Peraza

Jose Peraza is another player that presents a choice to the Reds. MLBTR estimates Peraza would earn $3.6 million in arbitration.

Based on the way the year finished, it’s hard to see the Reds going through the arbitration process with Peraza. The Reds demoted Peraza at the end of August. While they did bring him back with expanded rosters in September, the sign was clear. Matt Wilkes made the case for Peraza having played his final game with the Reds. To put it plainly, Peraza doesn’t offer the Reds anything more than Alex Blandino or Josh VanMeter, both of whom play the same position (other than VanMeter at short). The club could non-tender Jose Peraza like they did Billy Hamilton.

Reminder: In 2020, Major League active rosters expand from 25 to 26 players. Assume the Reds divide that evenly between pitchers and position players. Let’s assume further no Jose Peraza and no Derek Dietrich. We’ll assume the Reds pick up the option on Freddie Galvis at $5.5 million (although that’s no sure thing and highly dependent on new acquisitions) and that they reach an agreement with Kevin Gausman for $4 million in 2020.

A baseline roster comprised of players in the organization, with no trades or free agent signings would be this:

Instead of Bowman, the eighth member of the bullpen could be a league-minimum salaried player such as Joel Kuhnel, Sal Romano or Jimmy Herget.

Where does that leave the Reds heading into the offseason?

Say ownership sets payroll at $135 million. That’s a conservative estimate. Salaries for the above baseline roster would be about $104 million. Keep in mind, the baseline roster isn’t bare bones. It includes choices to take on Galvis and Gausman at the cost of nearly $10 million.

That leaves Dick Williams about $30 million for upgrades.

As Williams himself said a few days ago it gives the front office “opportunities to do some interesting things.”

I’d like to see 2 impact bats and an impact lefty starter and lefty bullpen. Put the budget to $150 million with high AAV guys with shorter terms.

I’d spend all the dough on bats. Cody Reed can be a lefty in the bullpen. Rotation is fine now. Need the hitting.

I’m hoping the reds move on from Galvis, save the 4.5 million to spend to bring in Didi Gregorius. It seems the only other plus option is a trade; which at this point, I’d prefer to keep Hunter Green, Jonathan India, etc for a more extended run at the playoffs.

I’d sign off on almost all of that. Two small things: You left off Lucas Sims and I see him as a solid-to-good bullpen guy. We’ll have to wait and see about Alex Wood’s back. But if he’d sign that contract, the risk wouldn’t be that great. I like Mahle for the rotation, but if they could add a healthy Wood, I’d do it.