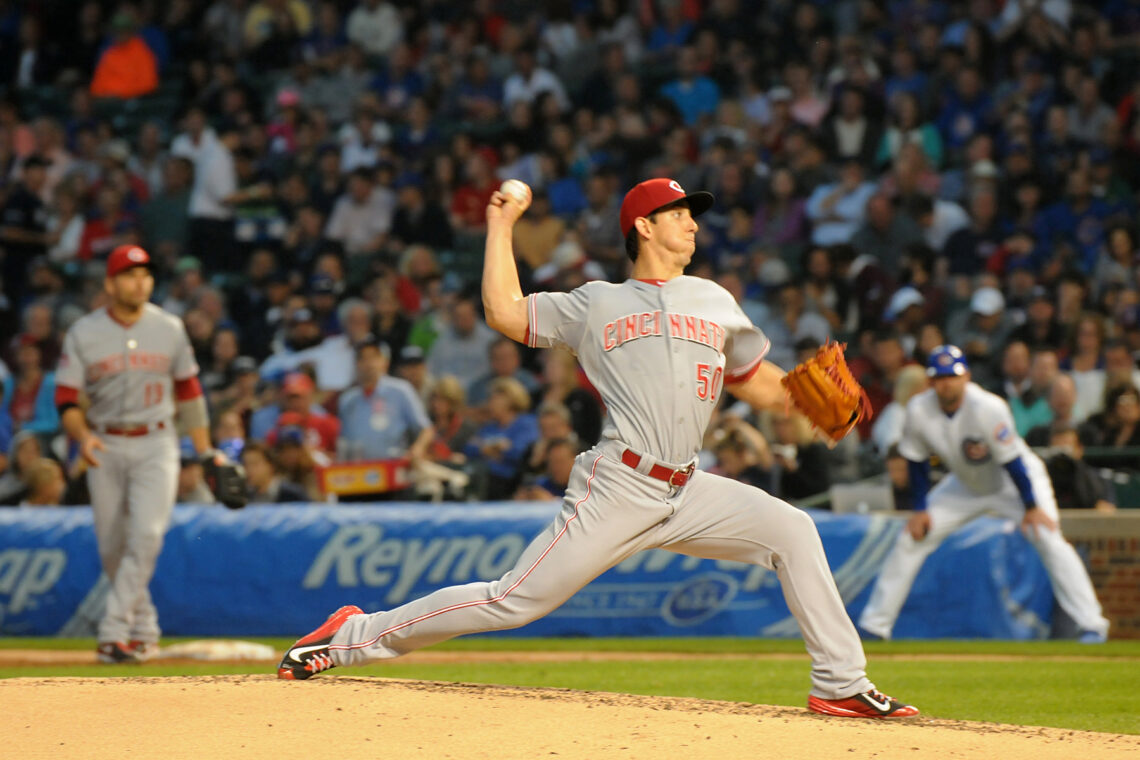 [Please welcome David Kelley to Reds Content Plus. He’s one of our new writers.]

Coming into the offseason, David Bell insisted that Lorenzen’s two-way ability would be explored even more next year. However, after the acquisitions of Nick Castellanos, Shogo Akiyama, Mark Payton (Rule 5), and Travis Jankowski, Lorenzen’s chances of outfield playing time are likely to be limited. In 2019, Lorenzen got 53 plate appearances, which was higher than 2018 (34 PA), but his heroics were limited to only one home run along with a .208/.283/.313 line. As a hitter, his walk rate (BB%) was efficient at 9.4%, yet his strikeout rate (K%) soared to 32.1% but is likely just a result of limited at-bats. FanGraphs projects him at .218/.285/.358 and a .276 wOBA in 2020, which seems possible but perhaps below what Lorenzen’s capability.

He started six games in outfield last season but appeared in 31 games total after a double-switch or being used as a pinch-runner — something he did fairly well last season (5 stolen bases in 7 attempts). Lorenzen is arguably one of the most athletic guys on the team and will rightfully be used in a way that plays to those strengths again in 2020. Barring a wave of injuries and trades, he’s not going to get 10+ starts in the crowded, talented outfield. But he’ll be quite an asset in late-game double-switches where Bell uses Lorenzen in the outfield at a key time in the game. Bell is likely to resort back to this scheme again in 2020 with Lorenzen playing a substantial role in those switches.

Relievers go through bad stretches. What separates good from elite is whether they can dominate nearly all season. Any concern you might have about Lorenzen heading into 2020 shouldn’t be about how good he can be; it should be about how long throughout the season can he be elite. The Reds will have a very steady bullpen in 2020, returning many of the same guys while adding talent to the mix (Justin Shafer, Jose De Leon, Nate Jones, Tyler Thornburg). However, this season, Lorenzen has a chance to distance himself from the rest of the Reds relievers as a truly dominant bullpen arm — which we saw a glimpse of in 2019.

While it’s tricky to base analysis of relief pitchers on month-by-month data due to small samples sizes and arbitrary cut-offs, we can look to see if we can identify any differences in the stretches where Lorenzen was effective and those when he wasn’t. In March and April, Lorenzen got off to a hot start, as shown by his 1.15 ERA. But at the same time he had a 5.24 xFIP due to a strikeout rate of 16.2% and an above season average 8.8 BB%. That xFIP pointed to an ERA regression. Lorenzen struggled in May and June, his worst months of the season, where his ERA soared to 5.14 and 4.97, respectively. Lorenzen was dominant during the back half of the season, as he limited hitters to below .195 AVG from July through September.

Analyzing his season a little closer, we see the drastic difference between his cutter and four-seam fastball usage, as shown to below. 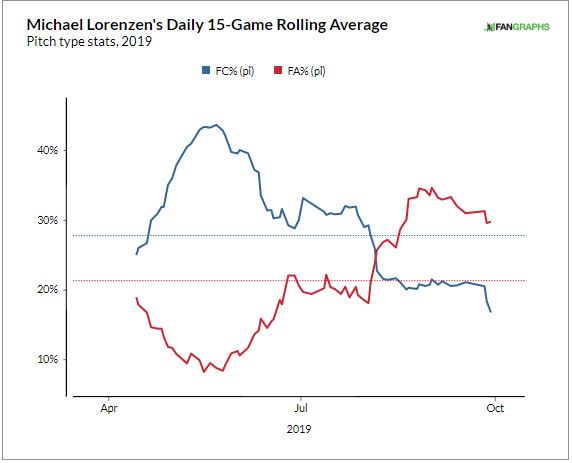 In 19 innings from May 3 to June 12, Lorenzen threw his cutter at a rate at least 20% higher than his fastball with his cutter reaching over a 40% rate while his fastball fell below 10%. This resulted in overuse of his cutter; during this time, his weighted cutter runs (wCT) dipped to -1.8 compared to his wCT of 4.1 after June 12th and 2.2 before May 3rd. Despite overusage of his cutter, he began to develop his changeup, his most valuable pitch. His weighted changeup runs (wCH) during this slump accumulated to 2.2 –much higher than before May 3rd (0.6) and continued after June 12th where it accumulated to 4.5. During this stretch, he also allowed hitters much better contact than he did throughout the whole season:

If he continues to throw his cutter and fastball at comparable rates, it allows him to be more effective as a pitcher and better set up his changeup — evident from July to September in 2019, where he held batters to less than a .263 wOBA each month. Although he threw his cutter (27.8%) and four-seam (21.3%) the most, his changeup (19.3%) was indeed his most effective pitch, limiting hitters to a .108 AVG and a 6 wRC+. With the changeup, he also struck hitters out at a superb clip of 42.3%. Possibly scaling back his use of the cutter to a comparable rate of his hard-throwing fastball would inevitably set up his fatal changeup. This very well may enable him to remain dominant throughout the season as one of the Reds’ best bullpen arms. It will be interesting to see how the newly hired Kyle Boddy and his data-driven analytics will aid Lorenzen in 2020 in this aspect of his pitching.

So, how good can Michael Lorenzen be this season? Mikey Biceps, in the prime of his career, might be in store for an elite season.

David , welcome to the show. My question about Lorenzen becoming elite is his spin rate. This seems to be the only thing holding back besides consistency I think you’re correct in thinking that working with Boddy might improve this. As for his consistency, his drive to become elite and his athleticism may serve to allow him to overcome this. Also if I’m not mistaken the death of his father was at the time of his slump which may have been a factor.Again thanks for profiling one of my favorite Reds

Thanks for the warm welcome Chris! I think spin rate is something to consider for all pitchers who want to really become elite. However, spin rate is not much of a concern for Lorenzen as he’s already an elite guy in that category. He ranked in the top 22 of all major league pitchers for spin rate in his top 3 pitches – fastball, cutter, and changeup.

Lorenzen’s father passed away in 2016, seems like it wasn’t all that long ago though. Re-watching that homerun at bat still gives me chills.