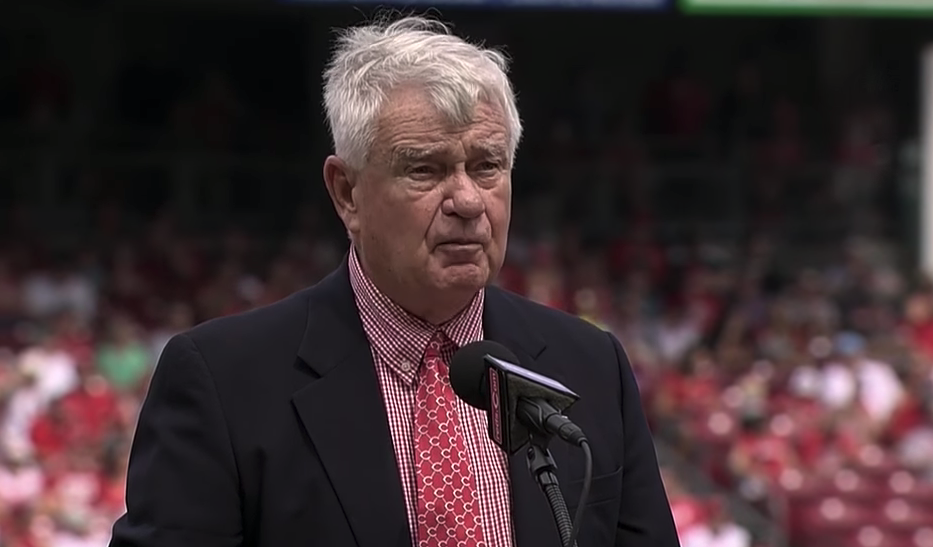 Reds President Dick Williams has been clear the club remains open for business. But signing free agent Nick Castellanos four weeks ago enabled the club’s front office to hit the pause button on major offseason moves. With improvements on offense and pitching staff in the clubhouse, the breather is a hard-won luxury. The Reds braintrust now has time to watch Nick Senzel and Jesse Winker round into full health (and trade value). They can see what they have in Japanese outfielder Shogo Akiyama up close and in a major league context. Minor leaguers Hunter Greene, Nick Lodolo and Jonathan India can take next-steps toward impact for the Reds or other clubs.

The lull also makes a good time to examine the club’s payroll and place it in context with past Reds spending and what other clubs are doing. We’re helped in this project by Craig Edwards at FanGraphs who laid out a couple days ago where each of the 30 major league clubs stand with payroll as spring training begins. Those numbers have meaning because the vast majority of free agents who could carry needle-moving salaries have been signed.

Edwards came up with two spotlight numbers for Reds fans:

Seeing those two figures in juxtaposition is not what Reds fans could have expected two years. Let’s take a closer look.

The league is making loads of money

The sport of Major League Baseball is healthy and continues to find new avenues to additional cash. Check out the trajectory of their gross revenues:

Not included in these numbers are the one-time $2.6 billion sales of MLB’s streaming BAMTech service to Disney. That windfall was divided 31 ways (MLB’s front office gets a cut) and sent out as $83 million in unearned jackpots to each owner.

Don’t believe the MLB doomsayers or the few remaining poverty pleaders. Baseball commissioner Rob Manfred has taken aggressive steps to make sure the flood of cash continues to surge into the sport.

What about declining in-person attendance? It’s not as big of a deal as you’d think. The value of each team depends little on small swings of annual operating profits. Blips in attendance don’t matter much because ticket and hot dog sales represent an ever-shrinking slice of team revenues.

How about those thrifty cord-cutters? Baseball has found a way to make money off them, too. It has inked a new round of multi-platform deals with broadcasters and has new agreements with Facebook to stream and other video services for live look-ins. A growing segment of fans may watch games on their phones rather than cable channels, but there’s a pile of money to be made no matter what platform fans choose.

Dwarfing all this is revenue from legalized betting. The American Gaming Association says that MLB could rake in $1.1 billion from the betting, associated platforms, programming, merchandise and sponsorships. MLB has embraced gambling like grandma’s Lotto plays. Beyond that, individual teams will set up arrangements with local casinos. The future isn’t far off when you’ll use an MLB app on a device installed to your ballpark seat to make a bet on whether Pete Rose gets reinstated. With teams getting their cut of the action, of course.

Payroll spending has risen, but not as fast as revenues

Owners of Major League Baseball teams are getting wealthy. Correction, already wealthy. So, becoming even wealthier. After all, MLB is nothing more than an association of the thirty privately held individual teams. All that revenue we just mentioned is distributed back to the owners.

The players get their share. Although the 20-year trajectory isn’t as steep as the revenue curve. From 2000-2019, revenues increased by 315% while payrolls grew by just 249%. It should be noted the absolute payroll numbers here do not include substantial employee benefits, the cost of insuring players or minor league salaries.

Despite a work stoppage here and global recession there, payroll spending has continued upward unabated until recently. From 2017-2020 average payrolls have stagnated or even declined a bit. The recent plateau is explained by big-stack teams diving below the luxury threshold to avoid a few million dollars in taxes and other teams slashing spending under the guise of rebuilding.

The Reds get their cut

Your favorite team has shared in the prosperity. Keep in mind that a huge chunk of baseball revenues — national contracts, technology development, shares of local media contracts and other baseball revenues — are divided and given equally to the 30 teams. Plus the league’s Collective Bargaining Agreement contains an aggressive revenue sharing program that redistributes income from some teams to others. The Reds benefit from revenue sharing. So despite sluggish attendance figures, Reds revenues have continued to rise.

Because baseball teams are privately held, these numbers aren’t public. But Forbes Magazine has their sources and releases updates every April. We don’t have Forbes’ estimated revenue numbers for 2019 yet, but will in a few weeks. Don’t be surprised if the Reds number takes another step up. Also, these figures do not include revenue from a share of FSO that the Reds won in their recent rights deal.

As with the other major league teams, the value of owning the Reds organization has skyrocketed since the Castellini Group bought it from Carl Lindner, and Bob Castellini was named CEO, in January 2006. Again, the numbers in this chart are from Forbes. Yes, those last two numbers are $1 billion and $1.05 billion.

You may wonder what caused the large jump from 2014-2015. No one factor explains it. But it had little or nothing to do with what the Reds themselves were doing. Every baseball team jumped in value that year. Several organizations signed lucrative media deals and MLB inked national broadcasting contracts. The league developed BAMTech.

But the gist of it is that the Cincinnati Reds have increased in value from about $270 million to more than $1 billion in 12 years of Castellini ownership. That’s an 11% rate of return on investment. Plus the perks of decent seats and the nice all-you-can eat Diamond Club buffet at every home game.

Prior to Lindner’s tenure, Marge Schott owned the Reds from 1984 to 1999. She paid just $9 million to buy a controlling share of the club. Whatever else you may think of her, including her reputation for frugality, she did oversee four Reds payrolls (1993-1996) that were among the top six in baseball. The 1995 payroll of $48 million ranked third. Those seasons followed the World Series championship in 1990 and included the 1995 NL Central championship team. Spending in that range now would put payroll around $180-200 million.

The next chart demonstrates the 20-year history of Reds payroll spending (red line) compared to the average MLB payroll (blue line). From 2000 under Lindner to the start of the Castellini Group ownership, the Reds spent 25-35% less than average.

Let’s take a closer look at the Castellini years.

The Castellini Era in four phases

Payroll spending under Bob Castellini’s ownership can be divided into four phases. To illustrate that point, our chart now shows just the Castellini years, including 2006. The first phase (2006-2011) was static spending.

The Castellini Group’s first six years of Reds payroll tracked the major league trend line although 25% below. For example, from 2008-2010, Reds payroll grew just from $74 million to $76 million. At the same time average MLB payroll increased just $2 million, from $93 million to $95 million.

In 2007, the highest paid Reds were Adam Dunn and Eric Milton, pulling in around $10 million. Junior Griffey too, in $8.5 million, although he also had deferred money. Kyle Lohse, Aaron Harang and Bronson Arroyo made about $4 million. League minimum in 2007 was $380,000, an amount earned by a new Reds outfielder named Josh Hamilton.

In 2008, the Reds became freed of the Eric Milton contract and signed closer Francisco Cordero to a $46 million/4 year contract. Adam Dunn led the Reds at $13 million. In 2009, Griffey and Dunn were gone. Most of the Reds payroll went to Arroyo ($10m), Harang ($14m) and Cordero ($12m). Brandon Phillips earned $5.2 million, but the highest paid position player was 33-year-old catcher Ramon Hernandez ($8.5m).

Starting in 2012 and lasting for three seasons, Reds payroll spending grew much faster than average MLB payroll. In 2013 and 2014, the Reds were MLB average. This is the second phase.

That burst of spending started with an NL Central championship team, following by two years the 2010 first-place finish. This was a period of time when the Reds received a $25 million/year boost from national TV contracts.

From 2012-2014, the Reds didn’t sign expensive new players, although Shin-Soo Choo made $7.4 million in 2013. Sean Marshall signed a nice contract. But most of the increase in salary was due to holding onto the core of the team: Homer Bailey, Bruce, Chapman, Cueto, Mat Latos, Mike Leake, Ryan Ludwick, BP and Votto. They were all earning in the millions and the Reds were fighting for championships, even at the start of 2014.

Phase three of the Castellini Era, starting in 2015 is when the two lines begin to diverge. Reds payroll stayed flat while the rest of the league continued to increase. 2015 was the ill-fated All-Star season. For three payrolls after that, the Reds cut spending by dumping Cueto, Bruce and Frazier. Reds payroll plunged to 40% below league average. Back then, the process was called the Rebuild. With benefit of hindsight, today we know not much ended up getting built.

The final phase of the Castellini Era is the current one. Over the past two seasons, Reds ownership has increased payroll spending from $101 million to $140 million.

In 2019, the Reds ditched the Rebuild and started adding from the outside. New salaries for Sonny Gray, Yasiel Puig, Alex Wood, Tanner Roark and Trevor Bauer caused payroll to jump by 25%. In 2020, the club added Mike Moustakas, Nick Castellanos, Shogo Akiyama, Wade Miley, an entire season of Bauer, and healthy paydays for Eugenio Suarez, Raisel Iglesias and Freddy Galvis.

The Reds may start the 2020 season with a payroll above league average. If so, it’ll be the first time since those Marge Schott teams in the mid-1990s. Ownership has approved a $50 million increase in payroll since 2016. With baseball’s new income streams, that $50 million increment will be equal to the growth in club revenues over that same time.

“With benefit of hindsight, today we know not much ended up getting built.”

Thanks for this, Steve.