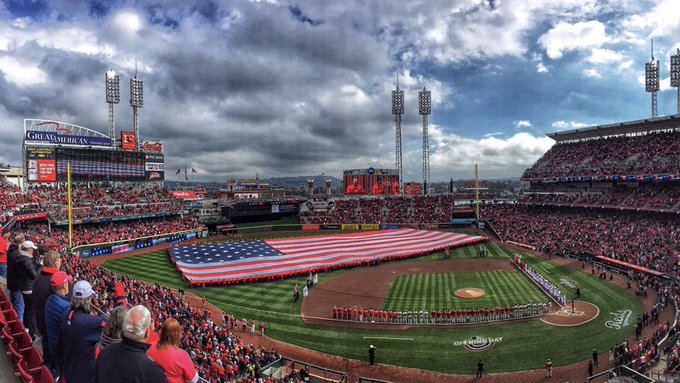 The sad but inevitable reality has arrived. This afternoon — as games are still in progress — Major League Baseball announced that Cactus and Grapefruit League play will be suspended immediately and the regular season will not begin as scheduled on March 26 due to the COVID-19 pandemic.

The start of the regular season will be delayed by at least two weeks, according to MLB’s press release. That would make April 9 the earliest possible Opening Day.

Players are expected stay at spring training facilities to continue working out, but they aren’t required to do so, according to USA Today’s Bob Nightengale.

Yesterday, the Findlay Market Opening Day Parade was officially canceled in what was a sign of things to come. Steve Mancuso wrote just two days ago about the possibility of the Reds playing with no fans on Opening Day, but even that has proved to be too risky after the virus continued to spread in recent days. Before MLB’s announcement, Ohio governor Mike DeWine also announced a ban on gatherings of more than 100 people.

MLB’s hiatus is just the latest unprecedented domino to fall in the sports world. On Wednesday evening, the NBA suspended all operations after it was learned that two Utah Jazz players contracted the virus. The NHL and MLS followed suit by suspending operations earlier Thursday. All NCAA conference tournaments were also cancelled, with the Big Dance — slated to start next week — in serious doubt.

Per MLB Network’s Jon Heyman, players are now being sent home and will not stay at the spring training facilities to work out.

In a change, players are being sent home from spring training camps now after an agreement between MLB and union. Possible done could remain but formal workouts will not be held. Players are concerned.

Nightengale is now reporting that, predictably, MLB does not expect the season to begin on April 9 but is still hoping to play a full 162-game season, which seems like a long shot.

Some GMs, however, aren’t expecting play to resume until at least July.

MLB Commissioner Rob Manfred having conference call at noon advising all teams to shut down their facilities. Several GMs are bracing for delay now as late as July

MLB has also stopped all scouting activity, according to The Athletic’s Ken Rosenthal.

Amateur draft currently scheduled to be held June 10 to 12. With so much uncertain, MLB does not want any clubs seeking a scouting advantage over any other. https://t.co/ZG9eV6kZJn

Today was a sad day for amateur athletes. Seasons and careers ended. Much bigger issues to address and rightly so. The pros will play again and get paid. But a lot of careers ended today for college baseball players. Tough time for everyone and much bigger than sports.