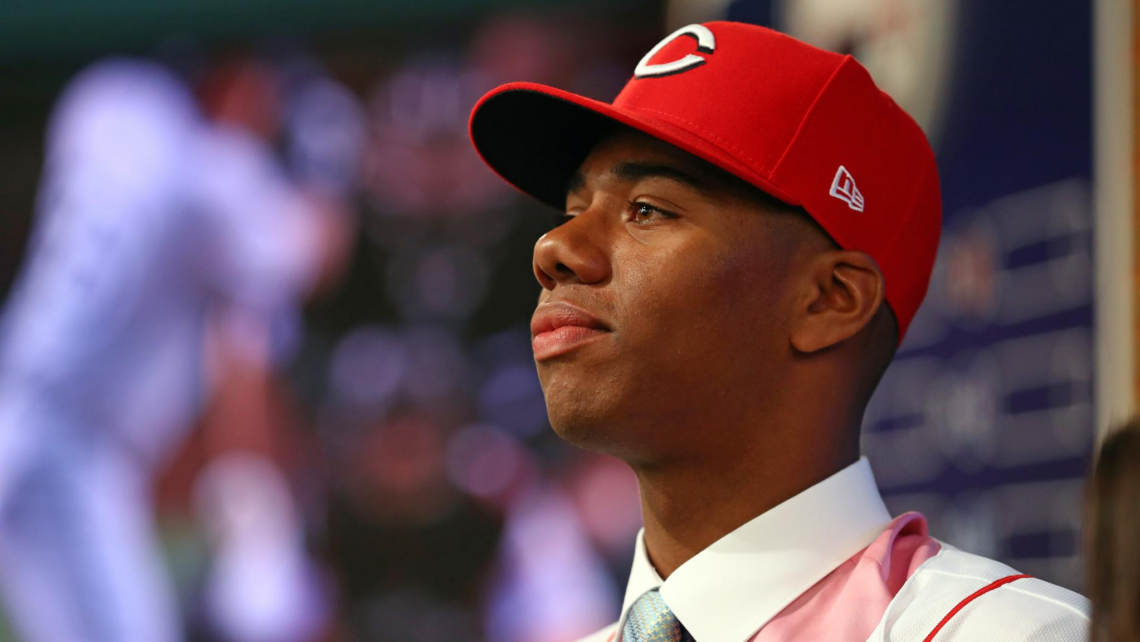 Reds pitcher Hunter Greene is in the news. And for all the right reasons.

A quick refresher: The Reds selected Greene with the #2 pick overall in the 2017 draft. Greene was a 17-year-old two-way star at Notre Dame High School in Sherman Oaks, California. The right-hander was considered an enormous, perhaps generational, talent. With his picture gracing the cover that May, Sports Illustrated wrote: “He’s 17. He mashes. He throws 102. Hunter Greene is the star baseball needs.” At 6’4″, 215 pounds, Greene is an imposing presence on the mound.

But after a promising 2018 at A-Dayton, last April Greene was derailed off his high-speed track to Great American Ball with the announcement the young right-hander would undergo Tommy John surgery and miss the entire 2019 season.

The good news is that Greene has used the offseason productively. He’s done charity work in Los Angeles and Cincinnati, where he ran a free baseball camp for 7-to-14 year olds. He also visited China and walked on The Great Wall.

What Reds fans care most about is Green’s baseball development. That’s the great news. Based on the self-reports from Greene’s Twitter feed, it’s fair to say he’s back on track. Greene posted his first day throwing (Sept.4), more throwing (Oct. 10), long toss (Dec. 11), working out (Jan. 10), backyard throwing (May 12), throwing through the windows of a moving car (May 17), more backyard throwing (May 27), working with Trevor Bauer (May 30) and two seconds of coming right at us (July 1).

Do what you love…love what you do. Let’s go @Reds pic.twitter.com/j7zo2zlEHU

When the Reds announced Summer Camp rosters last week, Hunter Green’s name wasn’t on either list. Nick Krall explained that Greene was considered still in rehab and the Reds were trying to figure out the best course for the young pitcher this year. The Reds announced 57 names, with a maximum of 60 allowed. So there’s room for Greene.

I wrote in May, when we thought rosters would be 50 players instead of 60 and didn’t know exactly how it would work, that the Reds should put Greene on the reserve roster from the start. He would benefit from hanging around veteran pitchers, catchers and major league coaches. I noted that by the season’s end, he could progress to a 100-mph bullpen arm that could help the Reds.

This morning, baseball writer David Laurila at FanGraphs published notes from an interview with Reds pitching instructor Kyle Boddy about Greene. Last October, the Reds named Boddy (BO-dee) the organization’s Director of Pitching Initiatives/Pitching Coordinator. Boddy, who is an Ohio native, founded and directs Driveline Baseball, a cutting-edge data-driven instructional program in Seattle. Trevor Bauer and other Reds pitchers have worked out there.

In the Laurila interview, Boddy discusses the progress Greene has made and it is encouraging.

Boddy reports Greene throwing “easy” 97-mph fastballs and up to 100-101 mph when “rearing back.” Boddy describes Greene’s slider as “unbelievable” and “eye opener” and “truly a plus-plus pitch.” Read the entire interview for more of what Boddy had to say.

This wasn’t the first time Boddy had commented on Hunter Greene. In November, we published an account of a Reddit interview Boddy did on a wide range of topics, including Greene. Boddy said then: “I knew Hunter before he was drafted by the Reds, so we have a pre-existing good relationship. We spoke when I was in Goodyear and I was very pleased with his mechanical changes he’d been making. … I will work closely with our rehab pitchers … coming back from actual pitching in the rehab process is such a variable journey.”

With Boddy’s new update, it’s clear Greene’s proper place is on the Reds 60-man roster. He should spend the weeks working with Boddy and others on developing his full repertoire.

But the Reds should also prepare Hunter Greene, his fastball and his slider, to join the Reds bullpen in September if, as we expect, the club is contending for the postseason. MLB rules governing 2020 say that Greene could be added to the club’s active roster as late as September 15 and still be eligible for the postseason.

Would the Reds consider that?

Or would they decide to preserve Greene’s service time to stretch his stint with the club from six seasons to seven? Just a year ago they were ready to hold back Nick Senzel for a few weeks to achieve that purpose. An injury intervened and made the decision moot, but the Reds had already announced Senzel would start in the minor leagues.

Even with that recent precedent, there are good reason to think the Reds would handle Greene’s situation differently from Senzel.

For one thing, the Collective Bargaining Agreement will be renegotiated in the next year and service time rules will be adjusted. Beyond that, if the Reds figure that adding Greene’s arm to the bullpen could make a legitimate difference in reaching and succeeding in the postseason, that’s a tighter “flags-fly-forever” calculus than speculating about Senzel on the 2019 Reds with a full 162 game season to play.

The example of David Price comes to mind. In 2008, the Tampa Bay Rays called up Price from the minors in early September. In 14 innings of regular season work, the 22-year old earned a spot in the Rays’ postseason bullpen. Price (who announced yesterday that he was opting out the 2020 season with the Dodgers) then pitched in three ALCS games against the Red Sox and two World Series games versus the Phillies. He became Joe Maddon’s top bullpen arm, closing out postseason games. The following season, Price made eight starts at AAA for Tampa before being called up to the Majors to pitch in the Rays rotation.

With advanced instruction and an improved delivery there is ample reason for Reds fans to hope Hunter Greene has recaptured his pre-injury potential and become an impact Major League pitcher. The Reds should focus on his long-term development and not cut corners. But if Greene’s progress allows, they would be foolish not to consider adding his arm to the 2020 postseason run.