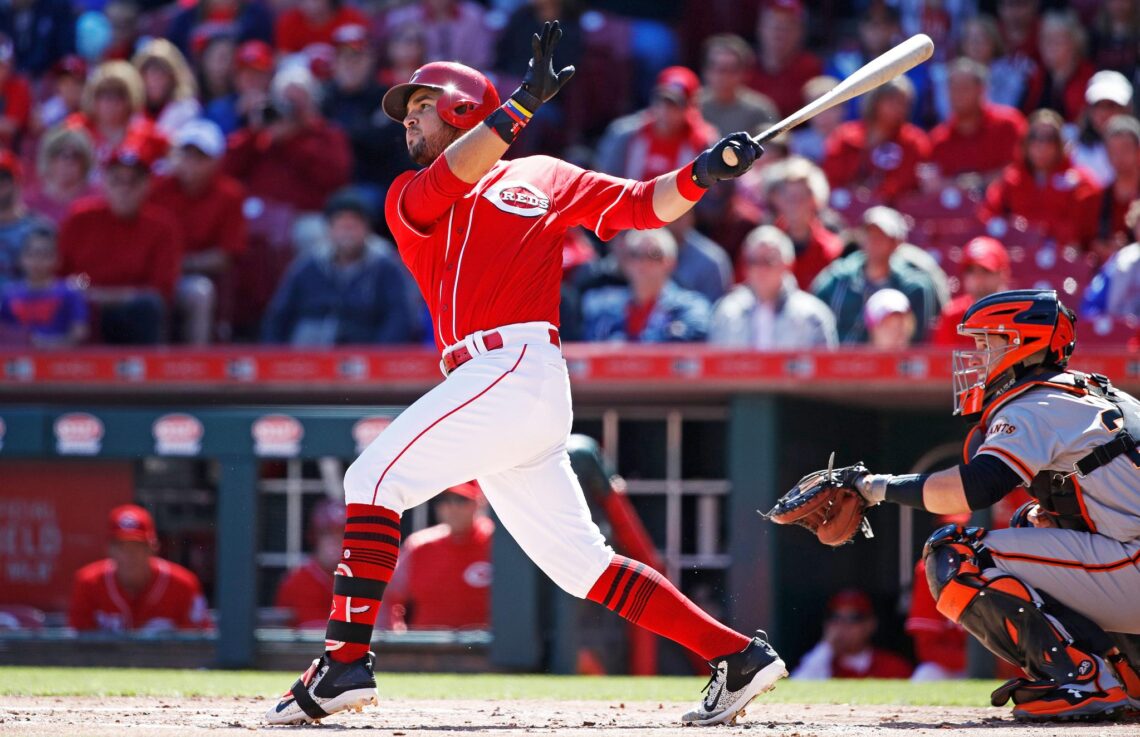 It’s hard to evaluate players this season. Much like mostly everything else in life, COVID19 has thrown conventional wisdom out the window. So, when I wanted to look into the hitting woes of Reds third baseman Eugenio Suarez, I found it tough. Two weeks is too small of a sample size to make rash judgments as he’s had only 49 plate appearances. However, with 12 games played, we are 20% done with this year’s regular season. So, take my analysis with a large grain of salt and let’s see if we can get a few clues what’s going on with Geno.

One thing I noticed is that defenses are shifting him way more than they ever have. Suarez has hit against a shifted defense 77.6% of his at-bats, far higher than last season which was his previous career high of 45.8%. Teams have been able to shift more often because 67% of his at-bats have come with the bases empty, seemingly a side effect of hitting behind the law firm of Castellanos, Moustakas, and Bombs.

He may be selling out for power. Normally you would associate this with a higher strikeout rate, but Geno’s is 28.6% which is elevated from the MLB average of 21.7% but right in line with his 2019 rate of 28.5%. It’s worth noting that his walk rate is up in this small sample at 14.3% over last season’s 10.6. But Suarez’s power problem is revealed in his average launch angle. At a current career high of 21.3 degrees it’s well above the MLB average of 11.9 and his career average of 15.7. Suarez is getting under too many pitches. He’s gotten under 44.4% of his batted balls, nearly 20% higher than the ML average of 24.3 and his career average 27.6, which has led to a career high percentage of pop-ups at 11.1% nearly double his career 6.4%.

As with most of the Reds hitters, Suarez has a wildly low baBIP. With a career average of .313, Suarez is currently sporting a .115 baBIP. The Reds as a team as a whole is at .228. Suarez has been unlucky. It’s unfortunate to have a prolonged bad luck streak like this in such a shortened season, but if you ask me, eventually the tides should turn and some of those unlucky outs will start turning to lucky breaks and I personally wouldn’t mind some lucky breaks down the stretch and into the postseason should the Reds get there.

It’s worth noting that Suarez had surgery to remove loose cartilage from his right shoulder in late January following an incident in a swimming pool. While the Reds and manager David Bell expressed that Suarez is 100% after the layoff to start the season, it’s possible Suarez is still feeling some ill effect from it. Hopefully Geno and new hitting coach Alan Zinter are correcting any issues he may be having and we will soon be able to add a new partner to the firm. Castellanos, Moustakas, Suarez, and Bombs does have a nice ring to it.

He was way over-swinging (not keeping his lead shoulder closed) the first week or so. He fell into a pattern of at times last year, but was able to correct it. When he starts hitting the ball with authority to right-center field, that is the sign that he is heating up.

Low Babip can sometimes mean something, but he’s just had a cruddy swing to start the season.

I agree completely. We’ve seen Suarez have these streaks many times. It will end in the way you describe and then he’ll go on a torrid home run binge. After a lot of HRs he’ll become HR happy and develop bad habits again.

Nice article, Steven. You don’t say it explicitly, but I assume the high pop-up rate is hurting his average exit velocity. Favoring a front shoulder can lead to a lot of pop-ups but I don’t see that with a back shoulder.

I feel he is trying to lift the ball, looking for the home run. hw does not appear to be the online on the Reds roster.