Breathtaking talent, a burning drive to win and reckless abandon.

Those qualities were never more on display than Sunday when Nick Senzel lined a John Schreiber fastball into centerfield at Comerica Park in Detroit and stretched it into a double.

Senzel sprained his left ring finger on that head-first slide. It isn’t the first injured digit he’s suffered while in the Reds organization. But early indications are this one isn’t serious and Senzel will be back in David Bell’s lineup against Cleveland today.

You have to wonder what flashed through the 25-year-old’s head as he lay there in a heap across second base. Was it the weeks he’d recently spent in a shoulder sling and relearning his swing mechanics? Did the countless range-of-motion and strengthening exercises cross his mind as the ump next to him signaled to the Reds medical staff?

It would be hard to blame him.

The shoulder injury last summer was also caused by a play of deftness, determination and disregard. Senzel crashed headlong into the wall at Busch Stadium trying to preserve his team’s 2-0 lead.

That happened on August 31 in the second game of a double header. Senzel played hurt another week or so before being sidelined. A few days later, Reds President Dick Williams announced the shoulder surgery that would bring his centerfielder’s season to an end.

The rehab process for that labrum procedure is painstaking and takes 5-6 months. If the 2020 season had started when scheduled in March, Nick Senzel might have not quite been ready.

Now, he is. But the path to reaching his potential has been anything but direct for the infielder-turned-outfielder.

Nick Senzel is back to his old swing (mostly)

Last August, in consultation with his coaches, Nick Senzel made an enormous change to his batting stance. During his time at the University of Tennessee, in the minor leagues and through the first four months of 2019, Senzel had used one stance. It’s called a “closed” stance. Closed means the batter is hunched over and his feet turned toward the plate, front foot closer to the plate than the back foot.

After talking with his hitting coaches Turner Ward and Donnie Ecker, neither of whom are with the Reds organization this year, Senzel decided to open up his stance and add a leg kick for timing. Even though he was having an excellent year at the time (more on that in a bit), Senzel wanted to hit even better. The new stance would allow him to see the ball better and be more aggressive.

Nick Senzel wanted a higher ceiling. Of course he did.

Thanks to the wonderful Baseball Savant site, we can pinpoint when Senzel switched from his closed stance to an open one. It was August 10.  These two pictures demonstrate the difference between the stances, the left on August 9, the right a day later. 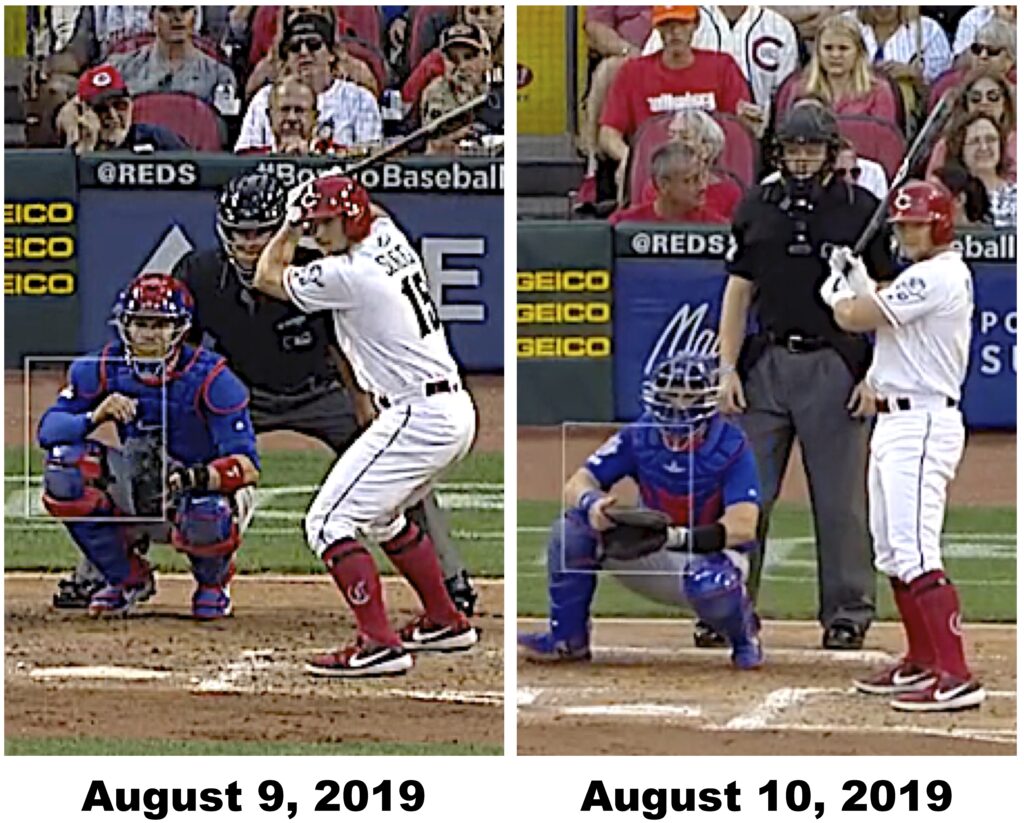 The intention was good, but the results weren’t what Nick Senzel was looking for.

From one perspective, Senzel’s 2019 had been a little disappointing. He was the top prospect in the Reds organization and top ten in MLB. Scouts had considered Senzel the best hitter in the 2016 draft when the Reds selected him with the #2 pick. He had torn up the minor leagues and received acclaim from Reds instructors at every stop. Only a series of unconnected injuries had derailed his rapid and steady progress.

Yet Senzel was having about as good of a rookie season as you could expect, given he was learning a new position. He had been an infielder all through college and the minor leagues and the Reds suddenly had asked him to play centerfield. Senzel’s numbers at the plate on August 1 were excellent given the circumstance.

But, in Nick Senzel’s his words, he wanted to hit better than .285 and changed his batting stance.

Then he smashed into the wall in St. Louis and the trial was over. An injured Senzel took 15 more plate appearances (.214/.267/.429) before the Reds ended his season.

Look where we are now. 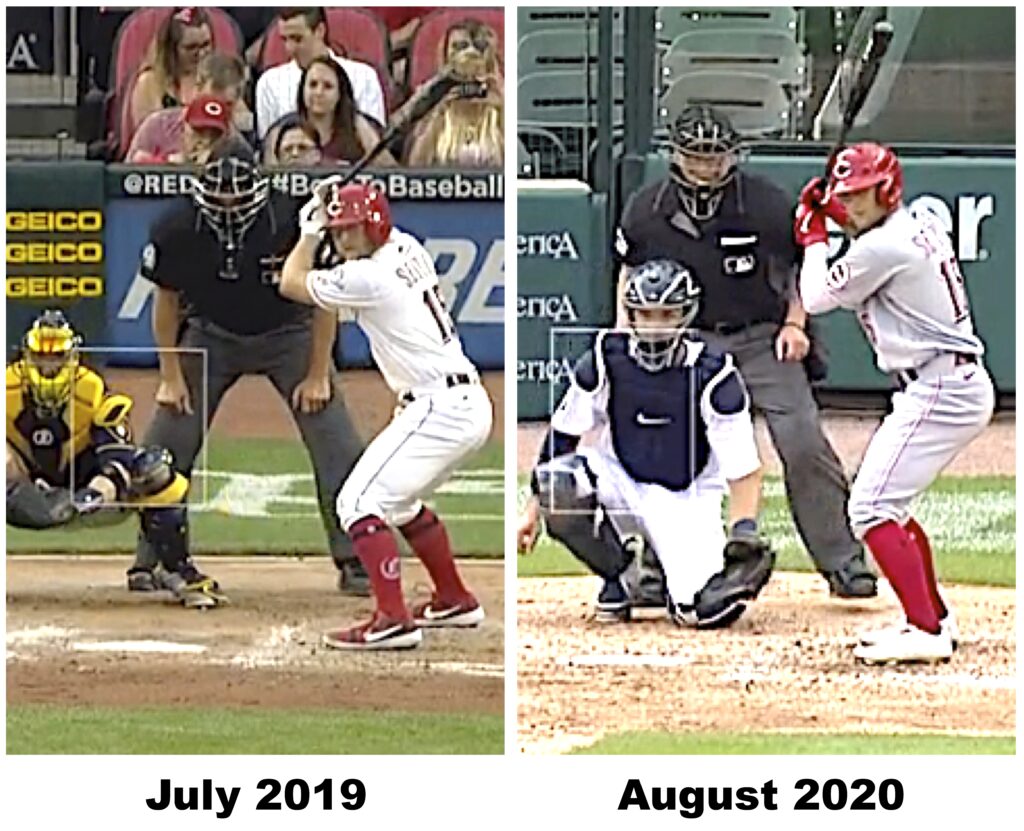 Nick Senzel said in December during Redsfest that he planned to return to his old stance and he largely has. The picture on the right is from a couple days ago. You can see that Senzel’s stance is no longer wide open. But it is also not quite as closed as it was before. He’s a bit more upright, with his elbow further down and his feet about the same distance from the plate.

Senzel is hitting the ball hard

Some players never return fully from labrum surgery. Ryan Ludwick is a cautionary tale that many Reds fans remember. Michael Brantley needed a second surgery before he returned to his regular numbers. But the odds are with a young, elite athlete — and Nick Senzel certainly qualifies as that.

How can we tell whether Senzel’s shoulder is healthy and his swing timing is back? The best individual indicator is the exit velocity (EV) of the balls he’s hitting.

MLB average for exit velocity in 2019 was 88.7 mph. Here are Senzel’s EVs from various parts of last year:

In the second game in Detroit on Sunday, he hit the ball 106.7 mph on the play he hustled into a double. After that he lined out to center (101.6 mph) and doubled to left center (99.6 mph) apparently no worse for the collision with second base.

Before you get carried away, repeat after me: It has only been 7 games.

Senzel’s early 2020 numbers should not form the basis of a projection about his upcoming season. Sample sizes that small are not reliable indicators of the future. But they do describe the past. It’s crystal clear from the balls that Nick Senzel has already smacked that his shoulder checks out.

Nick Senzel still has stardom in his future. His time may well have arrived.

But years of top-shelf accolades and prospect rankings might lead to the belief that Senzel is a sure thing. He’s not. That’s the case even for the few players with his obvious talent and insatiable drive. Nick Senzel would be the first to tell you that. We learned it from Chad Dotson’s poignant interview with the Tennessee native in April. Senzel has had self-doubt.

Look no farther than his 2019 season for a case study. The Reds asked the 23-year-old to switch to a new position at the last minute. He missed four weeks with an ankle injury. When Senzel was healthy his hitting was up and down, as you expect from a rookie. Then Senzel and his coaches decided on a radical change to something as fundamental as the batting stance he’d used forever. The stance change, not his labrum injury, triggered Nick Senzel’s August 2019 offensive swoon. Finally, he suffered season-ending shoulder trauma.

Now think of how impossibly hard it is just to reach the big leagues. Then consider going through all that while breaking in.

Yet Nick Senzel has overcome the adversity. From the way Senzel is knocking the ball all over the park, we can tell he’s put the shoulder injury and surgery behind him. His batting stance should feel comfortable and familiar, but is evolving. Senzel is getting accustomed to centerfield.

And the rest — a fierce drive to win, infinite effort, the talent to play baseball — that’s who Nick Senzel is.

Remember, he caught the ball in St. Louis.

Wow, now that’s an analysis ! I was thrilled with how Senzel was hitting the ball against the Tigers. My takeaway from his rookie season was the 285/.346/.475 numbers, plus an excellent adjustment to CF. He will live up to expectations and maybe more, if he can stay reasonably healthy. He doesn’t necessarily have to be an Iron Man, but no more major injuries please.

The whole tradeoff between playing all out vs. putting yourself at risk of injury has no ready answer. When he made that amazing game saving catch against the Cardinals, I was thrilled he’d done it at the moment. It’s hard to argue against an OFer not shying away from an OF wall to make a critical catch. But some things are just reckless – please no more head first slides. Austin Kearns had of course a slew of injuries, but in any case he was never the same after a hard tag from Ray King on a head first slide into home injured his shoulder.

Billy Hamilton struck me a reckless too. Maybe it’s just that he and Senzel are such great athletes they can consider doing things that others can’t. You put the dilemma well – playing all out vs. putting yourself at risk of injury. If I were the President or GM of an organization, I’d do everything I could to stamp out head-first slides (sorry, Pete).

Beautifully presented, Steve. Thank you. I am rooting hard for Nick.

Thanks. It’s hard not to pull for him. If you haven’t read the article from Chad Dotson I reference in the conclusion, you should. It will open your eyes to a surprising side of Senzel.

Yeah, easy to love Nick. I had not seen that article, but saw the one in the Athletic earlier. Imagine getting to learn with JV – awesome.