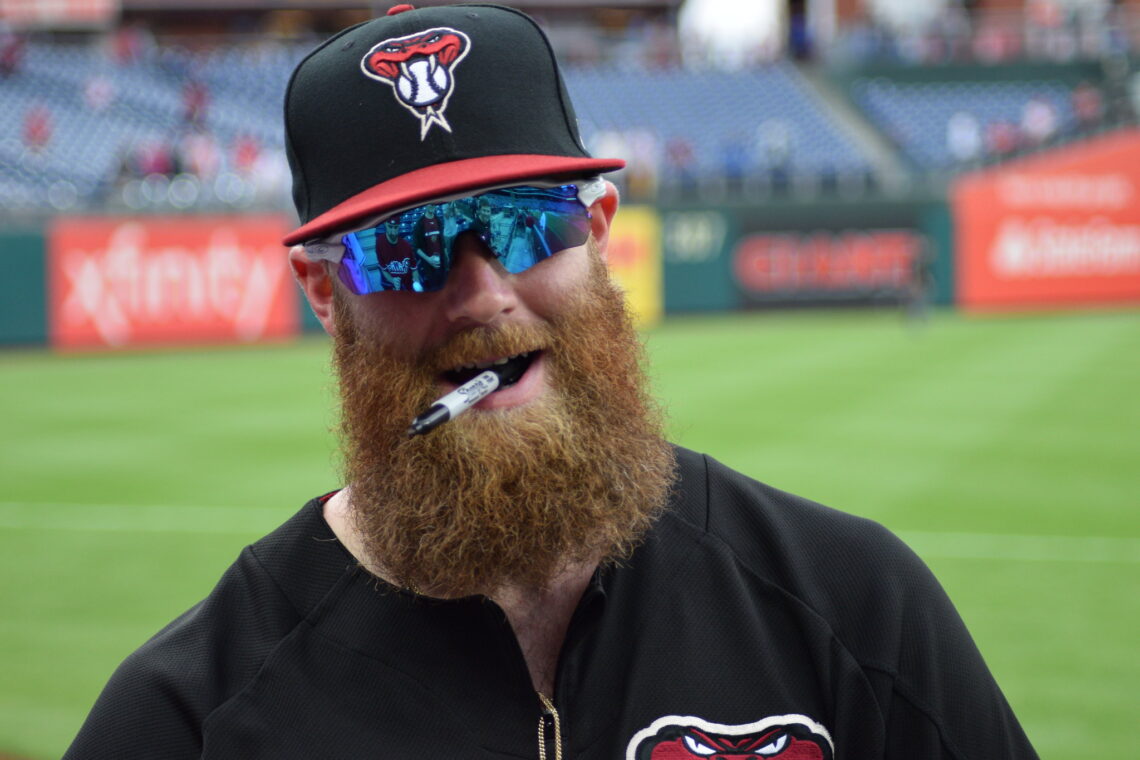 The Reds acquired right-handed reliever Archie Bradley (glorious beard and all) in a trade deadline deal with the Diamondbacks, sending infielder Josh VanMeter and outfield prospect Stuart Fairchild to Arizona in return.

Bradley was the seventh overall pick by the Diamondbacks in the 2011 draft. Naturally, he was a top prospect, ranking in the top 100 of every major publication from 2011 to 2015. He reached as high as No. 5 in MLB Pipeline’s prospect rankings. Bradley came up as a starting pitcher and made his big-league debut in 2015. In 34 starts over the next two seasons, he never quite lived up to his prospect pedigree, posting a 5.18 ERA, 4.27 FIP, and 4.31 xFIP. Despite peripherals that suggested Bradley pitched better than his ERA, the Diamondbacks moved him to the bullpen in 2017, where he’s remained since.

Pedestrian is the best word to describe Bradley’s ability to limit hard contact. He’s been remarkably consistent in this department throughout his career, never allowing a hard hit rate lower than 36.7% or higher than 38.6% as a reliever. League average for relievers is 36.1%. Still, he’s managed a well above-average .306 xwOBA due to his strikeout numbers, control, and ability to keep the ball on the ground. While not elite at generating ground balls, Bradley owns a 47.2% career ground-ball rate. The average for a reliever is about 43%.

Health — knock on wood — hasn’t been much of a problem for Bradley in his career. He missed time in his rookie year of 2015 after being hit in the face with a line drive and had another stint on the then-disabled list due to shoulder tendinitis. Since then, however, he’s avoided spending any time on the injured list.

For a pitcher with a high strikeout rate, he doesn’t have one particularly dominant pitch. 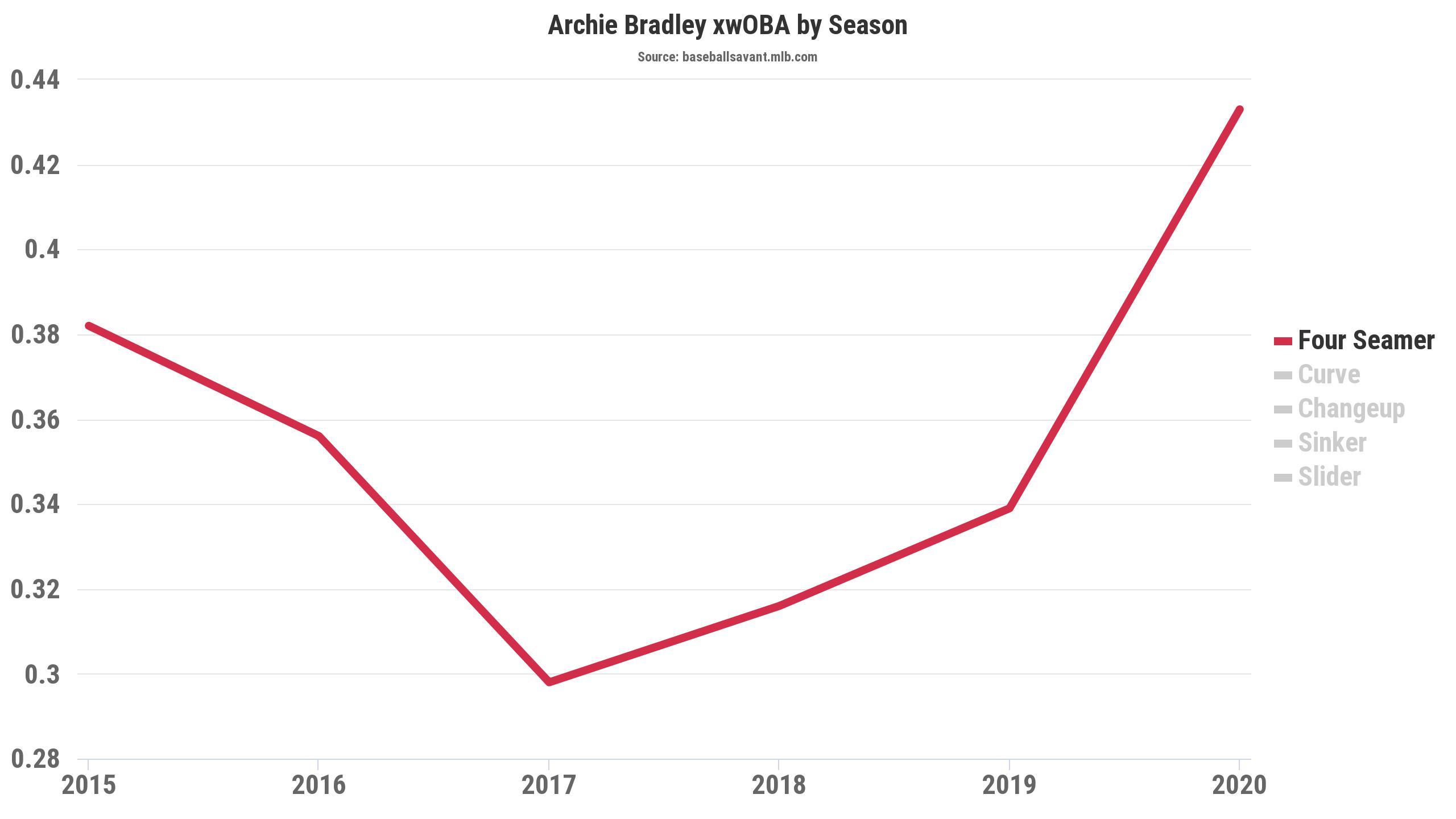 Bradley has relied more on his velocity to get whiffs and weak contact on his fastball. He also gets above average horizontal and vertical movement with the pitch, and its break toward his arm side is particularly effective in getting lefties out. However, his fastball spin is quite low (2,237 rpm, 41st percentile), which makes it more hittable — especially with reduced velocity and command. He’s also suffered from a ridiculously high batting average on balls in play against his fastball (.398 in 2019, .467 in 2020) that’s bound to come down if he can get his command back on track. Former Reds beat writer Zach Buchanan wrote about Bradley’s struggle with fastball command last year.

Where Archie Bradley Fits In

The Reds could slot Bradley in for high-leverage innings, but he’s unlikely to supplant Raisel Iglesias, Amir Garrett, or Lucas Sims for the most important outs of the game unless they’re unavailable. The ERA and peripherals lose a little bit of their luster upon a closer look under the hood. Bradley’s diminishing fastball velocity is a cause for concern, and his curveball command has slipped from its 2017 and 2018 iterations and led to a free fall in his ground-ball rate. The Reds may want to get that worked out before trusting him in the most crucial situations — hopefully, teaming up with Derek Johnson will prove beneficial.

Bradley is certainly still a solid big-league pitcher and a definite upgrade to the bullpen. He’s been remarkably consistent for a reliever, largely avoiding walks while getting his fair share of strikeouts without an elite swing-and-miss offering. Look for the Reds to use him in a variety of roles.

Thanks, Steve. When a pitcher is this far into his career, what’s your sense of the track record of their ability to learn to increase spin rate? Bradley must have pretty good arm speed to throw at that velocity, right? In that case spin adjustments could pay big dividends. But he and the Diamondbacks have to already have known that…

The Houston Astros have been able to make big improvements with several pitchers who were even later into careers than Bradley. I’m thinking of Justin Verlander, Chuck Morton and others. So I think it’s possible. Whether Bradley is one of those guys who is willing to accept suggestions remains to be seen. But he certainly has a large area for improvement.

Thanks, how could I forget about Morton? Here’s hoping he is highly coach-able!