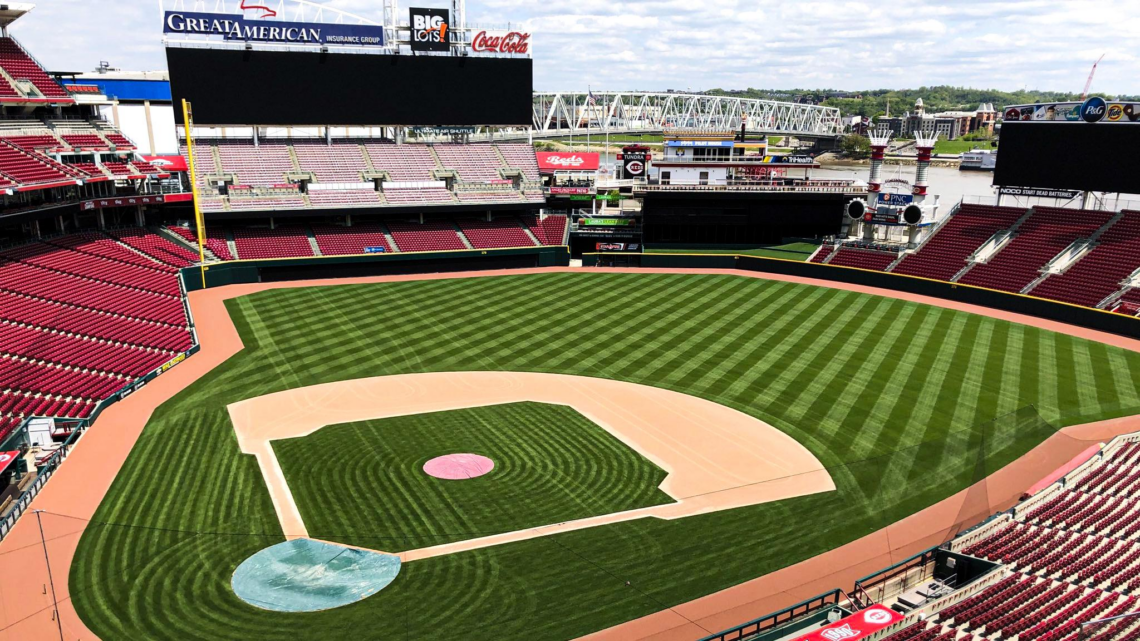 You can tell the Reds are involved in a postseason race by the appearance of the standings on our front page. They have gained ground in both the NL Central and NL Wild Card races. With the Cardinals loss to the Pirates yesterday, the Reds are alone in 2nd place in the division, a half-game ahead of St. Louis and a game ahead of Milwaukee.

The Cardinals lost to the Pirates yesterday and have gone 3-7 in their last ten games. Maybe the grind of their compressed schedule is taking its toll. One of their starters, Dakota Hudson, left the game early yesterday with elbow tightness. They still have 12 games left to play in ten days, starting with a doubleheader today, and no more off days. The current schedule calls for St. Louis to play 58 games while everyone else in the NL Central plays 60. If necessary, they will be forced to play one or two more games — makeup games against Detroit — on Monday, Sept. 28.

The Brewers didn’t play yesterday. They have gone 5-5 in their last ten games. They start a three-game series in Milwaukee tonight against the Kansas City Royals. Next week, they play three against the Reds and five more with the Cardinals, all eight games on the road.

The Reds have played their way into a tie for the second NL Wild Card slot. The San Francisco Giants are a game ahead for the first slot. The Reds are tied with the Phillies. The Cardinals and Brewers are involved as well, lurking just behind the Reds. The other two teams with a shot are the New York Mets (1.5 games out) and the Colorado Rockies (2.0 games out).

The Reds play a three-game series with the Chicago White Sox this weekend, starting today. The White Sox clinched a postseason birth yesterday with a win over the Minnesota Twins. They are 33-17 and in first place in the AL Central. Spenser Brown wrote an excellent Opponent Preview post on the South Siders yesterday.

The White Sox have announced starting pitchers for Friday (Jonathan 🙂 and Saturday (Dallas Keuchel) but not yet for Sunday’s finale.

Jonathan Stiever is an athletic, 23-year-old rookie RHP jumping from A+ ball to make his second major league start. He went 3.2 solid innings against Detroit last Sunday. The White Sox took Stiever in the 5th round of the 2018 draft out of Indiana University. He led the Big Ten Conference with 97 strikeouts in 100 1/3 innings as a junior in 2018. Stiever split time at A and A+ levels in 2019. He features a low walk-rate and high strike-out rate. Here’s how Baseball Savant describes his portfolio:

“Stiever operates with a 92-96 mph fastball, topping out at 98 and enhancing his velocity with run and sink as well as downhill angle that he creates with a high three-quarters arm slot. He has a second plus pitch in his upper-70s spike curveball, which he controls better than most pitchers do. He can turn his curve into a harder slider when he wants and is gaining feel for his changeup as he uses it more often.”

Dallas Keuchel spent most of his career pitching for the Houston Astros, where he won the AL Cy Young Award in 2015. He pitched last year for Atlanta and made nine starts so far in 2020 for the White Sox. He’s on a 3-year, $55.5 million contract through 2022. The Reds faced the 32-year-old LHP twice before, once in 2016 and once last year. He’s coming off the 10-day IL where he was sidelined due to back spasms.

Keuchel has always had a low strikeout rate by modern standards. His career K% is 18.9%. This year it’s fallen to below 15%. League average is 23.2%. But Keuchel has been effective through minimizing hard contact and inducing ground balls. He throws an equal mix of Cutter, Changeup and Sinker (87.3 mph). No real fastball or breaking ball to speak of. Think of him as a rich man’s Wade Miley.

Reds Starters for the Series

As of noon, the Reds haven’t announced any starting pitchers for the series. If they stay on rotation, it would be Tyler Mahle, Trevor Bauer and Anthony DeSclafani in that order. The Reds might be considering flipping Mahle and Bauer. That move wouldn’t be about the White Sox. Throwing Bauer to tonight would let him pitch the final game of the huge Brewers series on regular rest.

Check back here for updates this afternoon.

The White Sox have a Murderer’s Row lineup that seems to be completely unaffected by defensive positioning. Anderson is batting .366 and he’s not even a HR hitter (he has 8).
And their pitching staff is 3rd in the major leagues in ERA. The only weakness here is that their starting rotation is not deep, three good starters and the Reds only face one of them.

The White Sox record is odd: 21-3 against the Pirates and a losing record otherwise, even with just winning 3 of 4 from the Twins. Their record against NL Central teams other than the Pirates is just 5-5. But I wouldn’t put a lot of stock in any of this. Small sample size and they’ve been very hot lately.

Typo: 21-3 against the Royals, Tigers, and Pirates.

He very quietly gave Castillo two extra days of rest for this week’s start. There were most likely multiple reasons for that (we saw the results) but one consequence is that Castillo was moved from pitching against the Sox to pitching against the Brewers. There’s speculation that Bauer might also be held back to pitch against the Brewers. I doubt that, but I do think that Bell’s decision on who pitches against the White Sox will be partially dictated by the outcomes of the games. If the Reds win tonight, there might be less urgency for Bauer to pitch against the White Sox, depending on what the Cards and Brewers do. It’s complicated.

The Reds seem to have a better chance of being the sixth seed rather than a wild card, right? If the Reds go 6 and 3 the rest of the way they would finish two games about five hundred and it would be tough for either the Cards or Brewers to top that.