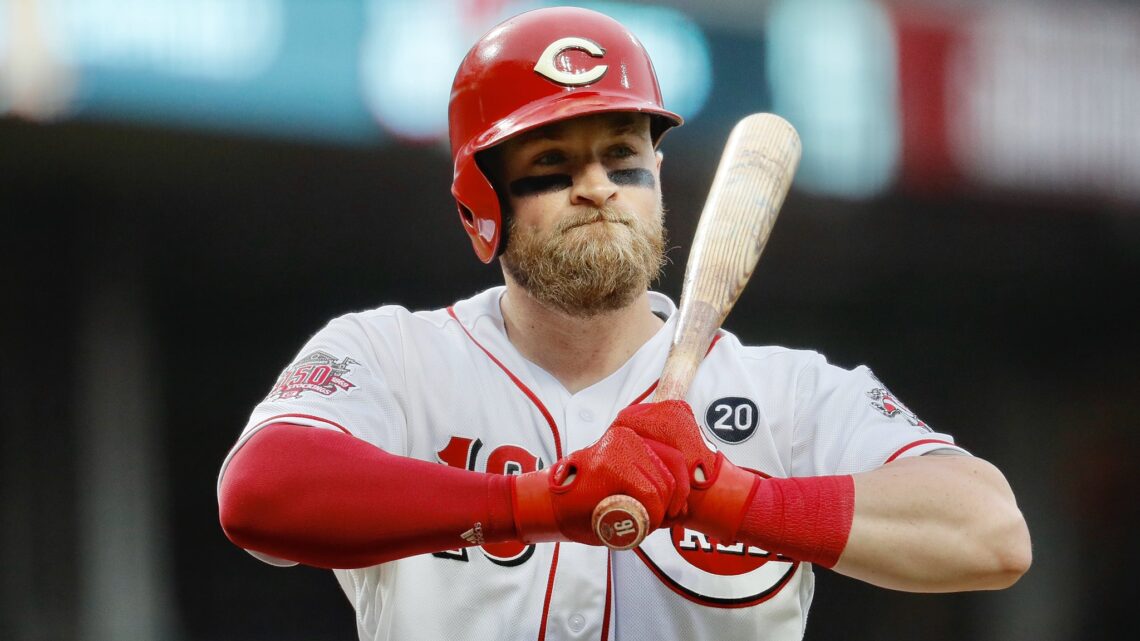 On September 5, 2019, Tucker Barnhart went to plate to pinch hit. He faced José Alvarez, a left-handed reliever from the Phillies. The Reds were 10 games out of first place, headed for an 87-loss season under first-year manager David Bell. Even though the situation had added drama of being the 10th inning of a tied game, the last thing on the mind of Reds fans was what side of the plate Barnhart was standing.

Yet, the circumstance was noteworthy. For the first time in his professional career, after more than 2000 plate appearances, Tucker Barnhart took his swings, well, swing, from the left batter’s box against a left-handed pitcher.

To say Barnhart’s inaugural left-on-left at bat was inauspicious would be an understatement. Not the stuff of highlight reels.

Why Barnhart was sent to hit against a LHP had to do with an earlier double-switch and short bench. Yes, if you’re wondering, the Reds won this game in the 11th inning on a solo homer by Phillip Ervin. But that plate appearance by Barnhart marked the end of an era.

Assigning an overall value to Tucker Barnhart as a player has been about weighing big pluses and minuses. His positive attributes come with a catcher’s mask on, the downsides with a bat in his hands. The former weighs heavily with good reason. Barnhart, who just turned 30, won his second Rawlings National League Gold Glove Award for catchers following the 2020 season.

About that offense, though. Prior to the 2020 season, Barnhart’s run production had been nearly 20 percent below a league average hitter, as measured by the weighted composite stat (wRC+).

The Reds front office looked at all of that and saw net good in Barnhart’s game. In September 2017, the sides agreed to a 4-year guaranteed contract running through the 2021 season, with a club option for 2022. The deal covered Barnhart’s three arbitration years plus his first free agent season. The total, not including the option year, was for $16 million. Barnhart will make $3.75 million this year.

Despite his dubious lefty-on-lefty debut, the Reds catcher didn’t flinch on his commitment to try hitting from one side.

It’s an axiom that major league players tinker with their swings. It’s what those Big League players mean the countless times they’ve said baseball is “a game of adjustments.” When big-time hitters change their approach, we know about it. For example, over his career Joey Votto has spawned a literal cottage industry for writers analyzing his stance and swing. We’ve paid similar attention to big-time prospects like Nick Senzel.

But we tend to overlook offensive adjustments made by players known for defense. But they adjust, too. The premise behind Tucker Barnhart’s decision to give up switch-hitting was that it would allow him to focus on fixing one swing, not two. Here’s what he told Reds beat writer Mark Sheldon:

“I won’t say [switch-hitting] has hurt my left-handed swing, but I don’t think it has allowed me to reach my full potential left-handed because I still have to work on hitting right-handed and that’s less swings for the left side.”

Given the Reds catcher’s career offensive numbers, there wasn’t a whole lot to lose from the experiment. So Barnhart spent the offseason working on his one swing and showed up to Spring Training 2020 (both of them) determined to give it a try as lefty-only. And that’s what happened. Barnhart took every one of his 110 Reds plate appearances in 2020 from the left side of the plate, including 22 against southpaws.

So what were the results?

Barnhart hit for average about the same as he had in his career (xBA). But in 2020 Barnhart found a swing that let him hit for more power, as shown in his ISO (isolated power above singles) and xSLG (slugging based on contact quality). 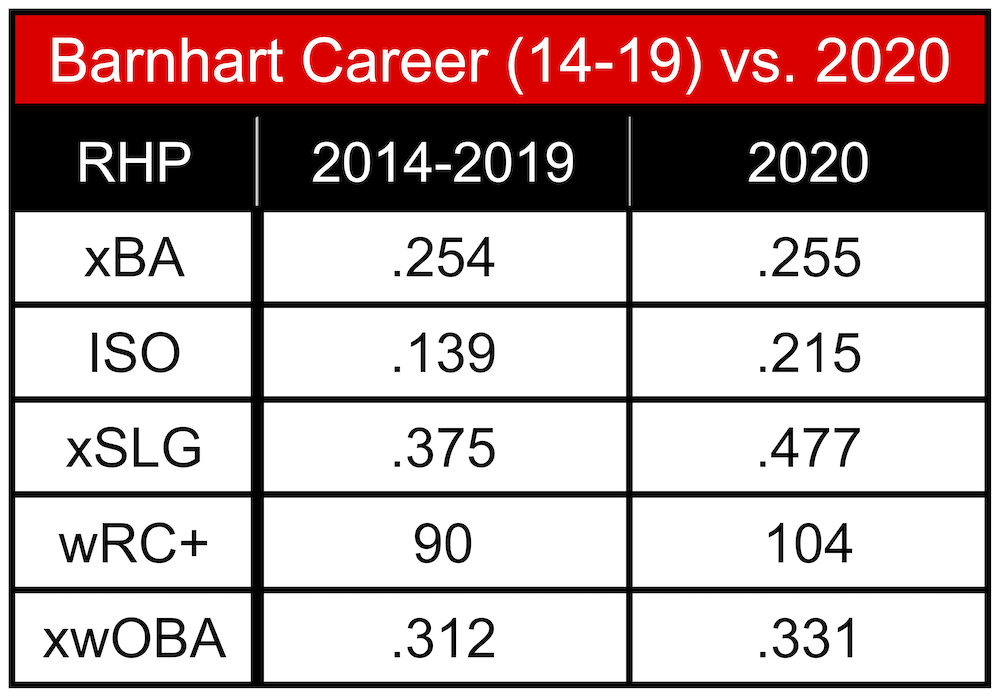 Barnhart also showed improvement relative to the league. The “plus” in the run production stat wRC+ means it’s adjusted for league and season with average being 100. While a switch hitter, Barnhart had hit 10 percent worse than league average (wRC+ 90) against right-handed pitchers. And that was his better side. But in 2020, he hit 4 percent better than average (wRC+ 104).

It’s also interesting to see where Barnhart ranked in comparison to his 2020 teammates against RHP. 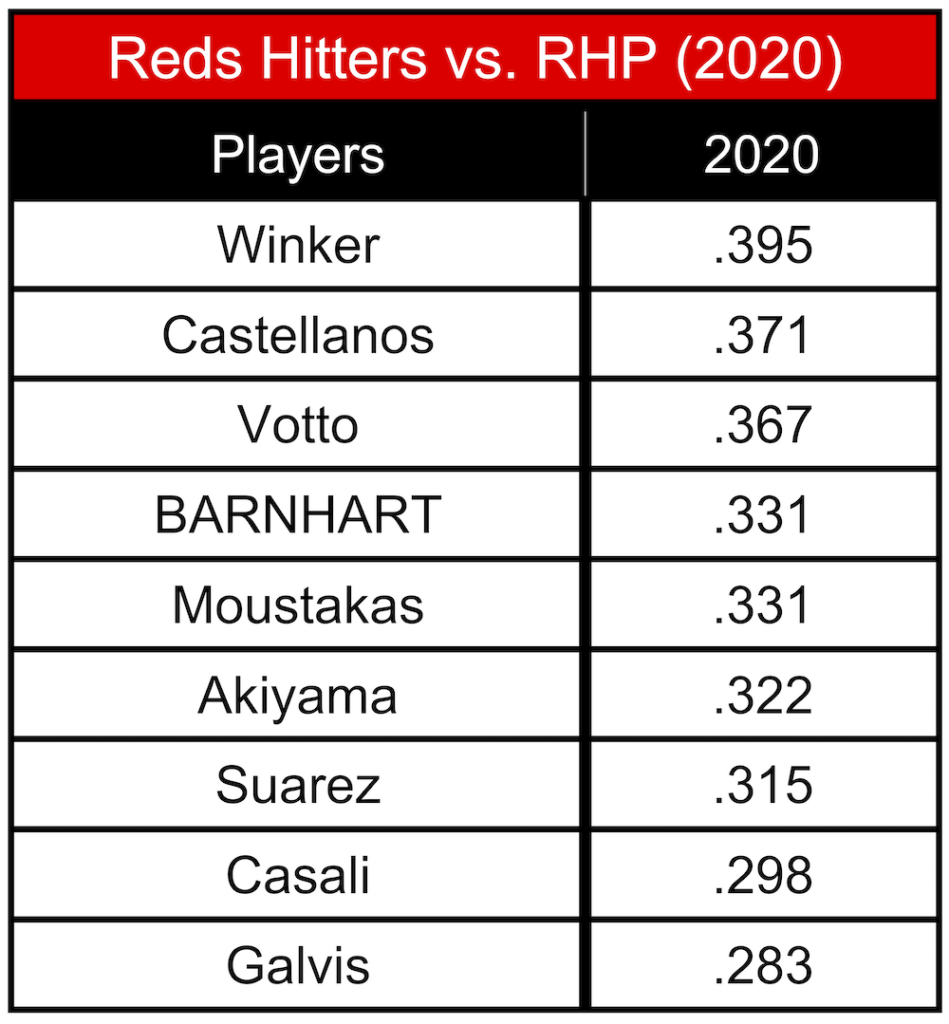 Lest you think “well, that’s just one split” remember that 73 percent of league plate appearances are against those right-handed pitchers.

That’s the good news. The downside of Barnhart abandoning switch-hitting was his collapse against lefties. He didn’t have many plate appearances in that situation, but the few were so horrible [wRC+ -15, xwOBA .189] that it dragged Barnhart’s overall numbers back to his career average, despite his significant improvement against RHP.

The Reds platoon at Catcher

It’s not as easy to achieve pure platoon splits with catchers as it is with other position players. When a team carries only two catchers, managers are reluctant to pinch hit one for the other, especially early in the game, because of injury risk and not being able to respond later if the opposite platoon situation arises.

In 2020, 22 of Barnhart’s 110 plate appearances (20%) were against lefties. Not once did Bell start Barnhart when the opposing pitcher was a lefty. The few left-left at bats Barnhart had were when the opposing team had pulled their right-handed starter for a left-handed reliever. Casali pinch hit for Barnhart four times in 2020.

With just two catchers on the roster, the reality is that 15-20% of a batter’s plate appearances will be on the “wrong” side.

It’s worth reminding ourselves that the sample size for the 2020 season was small. The erratic schedule, with fits and starts before and during the regular season, particularly for the Reds, was a confounding factor. A giant “For What It’s Worth” COVID caveat comes with any analysis that relies on stats from 2020.

But as Tucker Barnhart enters his 8th (!) season with the Reds, it’s interesting to comb through the numbers we do have and speculate. With greater focus on his LH swing, Barnhart was he able to improve his hitting approach in a meaningful way.

For example, his chase rate on pitches out of the strike zone fell from 29% to 23%, a significant drop. That’s a good sign and unusual for a veteran. Older players usually get less selective as they start to cheat on pitches. Barnhart cut his ground-ball rate by 13% and that boosted his home run and power numbers overall, despite his average exit velocity dropping.

Going forward, for the Reds to benefit from Barnhart’s improvements against right-handed pitching, they need to further limit the black hole that is his performance against left-handed pitchers. There are two ways that can happen. First, Barnhart could improve against LHP in his second season not switch hitting. He’s been working on it this offseason, as you know if you follow his Twitter feed:

You made me better and a hell of a lot smarter! @FeelGoodHitting … thank you for everything! pic.twitter.com/gabY9Vd9Aj

And/or Bell can cut back even further on Barnhart’s PAs against lefties by abandoning the strict platoon system. That raises the question: What are David Bell’s intentions for the catching position?

This is just speculation, but I think people who expect Tyler Stephenson to be the every-day catcher at the start of the season will be disappointed. I expect Bell will ease Stephenson into the job by having him fill the Curt Casali role and maintain a platoon. After that, it depends on how the two players are producing. If Tucker Barnhart can continue to hit against right-handed pitchers the way he did in 2020, he would no longer be a liability at the plate and the club wouldn’t have to choose between offense and defense.

Nice analysis, Steve, confirmed what I was seeing. One thing to mention: Kyle Farmer is the 3rd catcher.