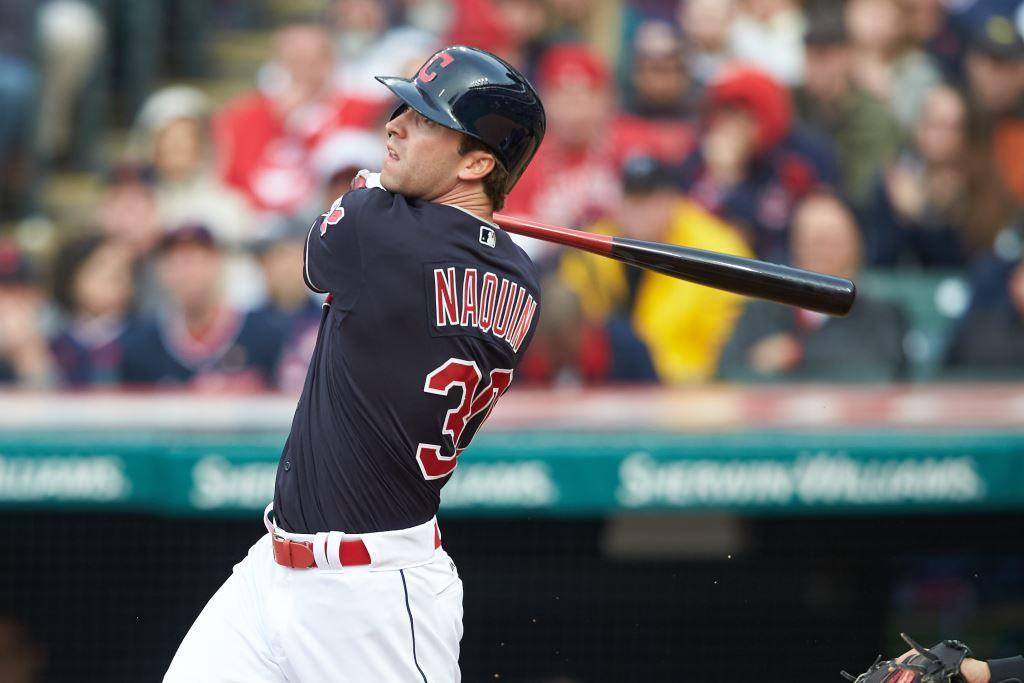 The Reds announced this afternoon that 29-year-old outfielder Tyler Naquin has agreed to join the organization on a minor league contract and with an invitation to spring training in Goodyear. The club assigned him uniform #27, worn last year by Reds Cy Young Award winner Trevor Bauer. Naquin throws right-handed but bats left-handed.

Naquin’s career has been with Cleveland until the club non-tendered him this December. He was heading into a his second year of arbitration after earning $1.45 million last season. Projections had put Naquin around $2-2.4 million for 2021.

Naquin was selected in the 1st round (15th overall) in the 2012 draft by Cleveland out of Texas A&M. He moved steadily through their minor league system, reaching AAA by the 2015 season. Naquin’s major league debut was on Opening Day, 2016 when he pinch hit. He started the next game for Cleveland in center and burst on the scene a promising rookie. Naquin slid into the hearts of Cleveland fans with this walk-off inside-the-park homer against the Blue Jays.

Tyler Naquin has experienced more than his share of injuries since becoming a major league player:

Nothing chronic. But while speed was part of Naquin’s skill set when he arrived to the big leagues — on full display in that home run video — now his sprint speed is in the 51st percentile.

Naquin spent all but three weeks at the major league level in his debut season, appearing in 116 games for Cleveland. He spent most of the following year (2017) at the AAA level, playing only 19 big league games. By 2018, he had become a regular major leaguer. The only time he missed in 2018-20 was for injuries or rehab.

Naquin would definitely be used in a platoon role by the Reds. Last season, in his 22 plate appearances against LHP, Naquin had no hit and no walks. He did manage an HBP and sacrifice fly. So what matters is how good of a hitter Tyler Naquin is against right-handed pitchers.

Let’s break his batting skills (against RHP) into its three components:

If you’re looking for positives, in 2020 Naquin had one of the highest hard-hit percentages (51.6%) in the league. That’s in the 93rd percentile. His average exit velocity was in the 87th percentile. Those are both excellent.

Tyler Naquin was Cleveland’s centerfielder in his debut season of 2016, making 90 starts there. He played only a small handful of games in right. But by the time Naquin returned to the major leagues full time in 2018-2020, he had become a corner OF, mostly playing in RF. Naquin didn’t play in center even once in 2019 and 2020, having been replaced by Bradley Zimmer, Oscar Mercado and Delino DeShields.

In right field, his defensive metrics DRS and UZR were strongly positive in 2018 and 2019 in all three areas of range, arm and glove. In 2020, those metrics for Naquin were largely neutral, with the most significant drop off being in range. In Statcast’s OAA (Outs Above Average), he was above average in 2018 and 2019, but in 2020 his -4 OAA was next to the bottom. The bottom being Nick Castellanos at -5.

It’s a bit hard to know what to expect in 2021. Maybe 2020 was a COVID-caveat. Or maybe Naquin showed steady decline in speed and reaction time and has become a net liability in the field.

Tyler Naquin is a corner outfielder who bats left-handed. On the 40-man roster, the Reds have Jesse Winker, Shogo Akiyama and Mark Payton who already do that. Right-handed OF bats include Nick Castellanos, Nick Senzel, Aristides Aquino and Scott Heineman. In case you missed the headlines a couple months ago, the Reds acquired Heineman from the Rangers in December.

Active rosters have expanded to 26, with 13 pitchers and 13 position players. A standard way to break down the latter category would be two catchers, five infielders and six outfielders. If the Reds carry six OF, Naquin would have to beat out Payton and a handful of other guys not on the 40-man roster. That’s plausible. But if everyone is healthy, that’s also his limit.

With Naquin coming in on a minor league deal, there’s no risk in the signing for the Reds. If something should happen to Mark Payton, Naquin would slot in as the third OF batting from the left.