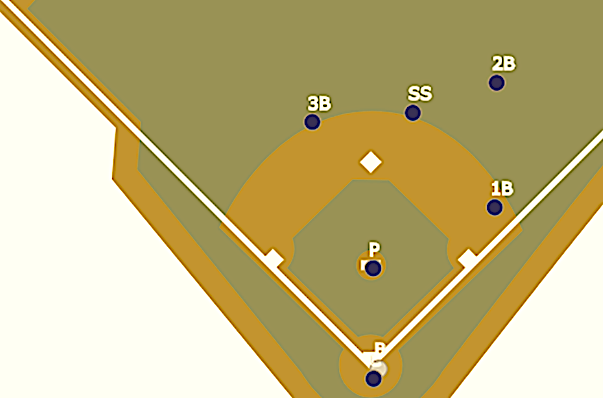 The Reds offensive struggles in 2020 were frustrating and well documented. The statistic often used to explain these struggles is Batting Average on Balls in Play (BABIP). BABIP helps to determine the “luck factor” in a player’s ability to get a hit. While it varies from season to season, the typical BABIP of MLB is around .300. In stark contrast, according to Fangraphs, the 2020 BABIP of the Cincinnati Reds was .245, good for lowest in all baseball. Every other aspect of the Reds offense was at least above average. At first glance, it makes sense to use this statistic to blame the Red’s offensive woes on bad luck. However, is bad luck the true culprit, or was there something else at play?

Much has been written about the shift in recent years. Some fans enjoy the novelty of watching players play out of position. Others disapprove, saying that it creates much less on field drama by decreasing baserunners. Whatever your opinion is, one thing is for certain: In a game where shifting is taking place, the ability to hit the ball to all parts of the field on a consistent basis is becoming more critical.

The shift is applied to a hitter when he shows a tendency to hit the ball to the same part of the field. Typically, hitters end up hitting the ball to their pull side, as they try to hit for more power. Usage of the shift varies from team to team, but data has indicated that shifts are much more common against left handed hitters. In fact, during the 2020 season, left handed hitters were shifted against over 50% of the time. The key to beating the shift is to be able to hit the ball to all sides of the field on a consistent basis.

So, how did the Redlegs do in hitting to all sides of the field? Let’s check the data.

Wow, that’s a lot of hitting to the pull side. In  fact, as a team, the Reds pulled the ball more than any other team in baseball (40.5% of all  batted balls), except the Diamondbacks and Astros (41.3% and 42.1% respectively). Eugenio Suarez is chief offender here, pulling the baseball in over half of all batted balls. Aristides Aquino only hit to opposite field in 3.4% of his batted balls, sacrificing a third of the field every time he put the ball in play. Shogo Akiyama is on the other end of the extreme, hitting the ball to opposite field more often than hitting to his pull side. It’s interesting and worth noting that Akiyama is one of the few Reds to have an above average BABIP, with Kyle Farmer being the other exception. For the 2020 Reds, there is a strong correlation between hitting to the pull side and having a low BABIP. In fact, when one removes Kyle Farmer’s anomalous data, the correlation between pull hitting and BABIP is -71%, indicating an inverse relationship.

For the Reds, the more they pulled the ball, the less it fell for a hit. This was due to heavy shifting against the Reds. In fact, the Reds BABIP against the shift was .247, good for worst in all baseball. Left handed hitting Reds, such as Joey Votto, were especially hurt. Over the 2020 season, based on the quality of his contact, his expected batting average was a respectable .282. In reality, his batting average ended up at .226.

When trying to improve, it can be helpful to study the successes of others. For this exercise, consider Nationals star hitter, Juan Soto. Soto, arguably the best all around hitter in baseball, has a very interesting batted ball profile.

Beautiful. Talk about balance. One of the factors that led to Soto’s success in 2020 is his ability to hit the ball to any part of the ballpark. Teams have trouble shifting against him because they have no idea where he is going to hit the ball.

If Juan Soto represents the perfect hitter, which Reds player most closely resembles him?

Based off batted ball data, the player that most closely resembled 2020 Soto is Nick Castellanos. While he pulled the ball 14% more than he his opposite field, he showed the most ability to hit the ball to all parts of the field.  Akiyama and Moustakas were very close seconds. While it is unreasonable to expect any of these players to hit like Juan Soto, positive regression is likely, and Reds fans can expect improvement from these players specifically.

Let’s look forward to the 2021 year to examine what we can expect from our offense. Many baseball analysts are predicting that, due to the unsustainably poor BABIP, the Reds offense will be better than 2020.  In addition to the assumption that their BABIP will positively regress to the mean, many other underlying metrics suggest offensive improvement. During the 2020 season, the Reds were above average, or even top tier, in many important aspects of hitting.

These metrics suggest that there is a lot to like about this offense, and over the course of a full season, it will be exciting to see what it is truly capable of achieving.

IOW, it seems like a lot of the “bad luck” the Reds hit into last year was due to the fact they pulled a larger % of their balls in play, and thus were hitting into a shift.
But that could leave two (or more) explanations, 1) they pulled more and teams shifted to take away hits on pulled balls so they just need to hit the other way more often(ie everyone has a huge gap between xBA and BABIP on pulled balls) or 2)They pulled more AND they were even unluckier than the average bear when it comes to pulled balls finding fielders.

This article was insightful. I found the Juan Soto comparison helpful. Keep up the great work.

This article was insightful. I found the Juan Soto comparison helpful. Keep up the great work.

Reds Crush the Pirates in 14-1 Win – Reds Content Plus

[…] the Redlegs are trying to put the ball in play by hitting to all parts of the field—something we covered last week. This new hitting approach worked well tonight, with the Reds completely clobbering the Pirates […]