In a shocking display of not knowing what they’re doing, MLB has suspended Reds outfielder Nick Castellanos for two games for “aggressive actions and instigating a benches-clearing incident.” The suspension was scheduled to begin tonight, but Castellanos will appeal, delaying any discipline. Three Cardinals and two additional Reds players were fined. The appeal will be heard by the Special Assistant to the Commissioner or the Commissioner.

In case you haven’t seen the incident, here’s what unfolded on Sunday in the bottom of the 4th inning:

The series of events began with Cardinals rookie pitcher Jake Woodford hitting Castellanos with a 93-mph fastball on the back of the arm and ribs. The Cardinals claimed the HBP was unintentional, but there’s reason to believe it was in retaliation for Castellanos show-boating a bit the previous day on a home run. Woodford received no punishment for the HBP. That’s about to become a theme.

Castellanos slid to avoid contact. He didn’t try to bowl over Woodford, which he could have. After the slide, he didn’t touch Woodford or any other Cardinals player. He was walking away from home plate when he was charged from behind by Cardinals catcher Yadi Molina. Molina pushed the home plate umpire, who had moved toward Castellanos, into the Reds outfielder. Molina himself then grabbed Castellanos in the back of the neck before being separated. I make a point about it being the back of Castellanos’ neck to emphasize that the Reds OF was walking away from the situation.

Molina was fined an undisclosed amount, but not suspended, even though he laid hands on an opposing player who was moving in the opposite direction, away from the confrontation. This was not deemed an “aggressive action” or “instigating” in any way.  To review, it was Molina, not Castellanos, who rushed into and pushed an umpire. It was Molina, not Castellanos who grabbed an opposing player in a hostile (not peace-keeping) manner.

Castellenos was ejected during the game. The only player thrown out. Yet MLB decided in its finite wisdom to compound the injustice. Here is reaction from around the baseball world:

Nick Castellanos has received a two-game suspension for his "aggressive actions." Presumably these took place off-camera, as I was watching on MLBTV and didn't see anything that would reasonably qualify as such.

Castellanos has appealed the 2-game suspension #Reds. I think his case should be simple: Go to MLB and say, I thought you wanted to 1) “Let the kid’s play" and 2) protect players from dangerous actions on the field. If that is the case, how did I get suspended? 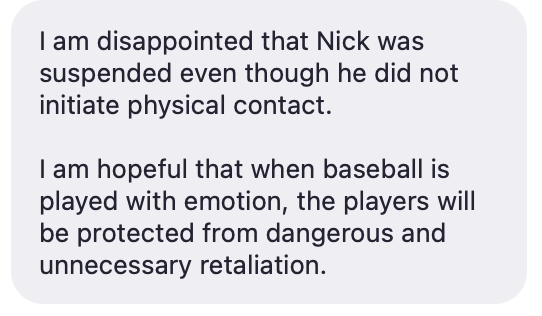 The more I watch the tape of Saturday — Castellanos does flex it's over the top, BUT he doesn't touch anyone. The contact is initiated by Molina and home plate umpire Tony Randazzo ON Castellanos. The first person out of either dugout is Cardinals pitching coach Mike Maddux

I'll take out a loan to cover the amount of money I'll wager that Nick Castellanos from Saturday is included in some sort of MLB-produced hype video. https://t.co/5GwE79fUM7

It's completely ludicrous that Nick Castellanos has been suspended for two games for this. Insanity. https://t.co/XVVqlb3prQ