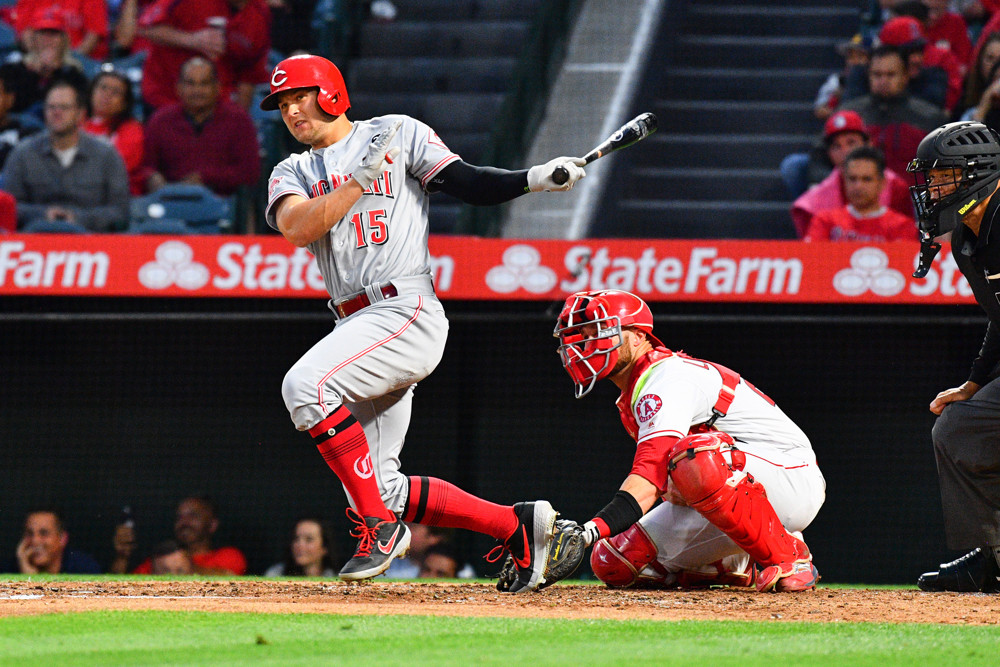 The Reds offense stayed hot and Luis Castillo bounced back on Wednesday as the Reds completed the sweep of the Pittsburgh Pirates with an 11-4 win. The winning streak is now up to five, and the Reds’ 5-1 start to the season is their best since 2016.

Tyler Naquin continued his torrid start to the season, hitting the first pitch of the game over the left field wall for a home run.

After a throwing error, Pirates’ starter Chad Kuhl walked Joey Votto and Mike Moustakas to load the bases for Nick Senzel. Kuhl then threw another four balls to bring in a run and make it 2-0 Reds.

Next, Jonathan India hit a flyball into center field that was just deep enough for Votto to tag from third. But the Reds were not done in the first.

Kyle Farmer, who replaced Eugenio Suárez at shortstop for the day, ripped a ball down the left field line that just stayed fair. Two more runs would score. Tyler Stephenson would ground out to end the inning.

Kuhl would settle in after that, though, striking out five of the next seven batters he faced. After Kuhl had gone four innings, the Pirates sent in Chris Stratton to begin the fifth, and he received the same welcome as Kuhl, as Nick Castellanos rocked Stratton’s very first pitch for a home run. 6-0 Redlegs.

Next, Votto singled, Moustakas popped up, and Senzel doubled. With Votto on third and Senzel on second, India hit a ball hard into left field that brought home both baserunners. India was thrown out trying for a double.

The Reds’ offense continued in the seventh inning as Moustakas hit a two-out single into center field, before Nick Senzel launched a ball into left field that Pirates’ Phillip Evans misplayed, allowing Moustakas to score from first. 9-0 Reds.

The offense was at it again in the eighth as Stephenson and Aristides Aquino hit back-to-back home runs off newly entered Pirates pitcher David Bednar.

Hi, our name is the Cincinnati Reds and we hit DINGERS. pic.twitter.com/37bYPhNbZw

In the season opener against the Cardinals, Luis Castillo didn’t record a strikeout in 3.1 innings of work. Today, he struck out the second hitter he faced. Across seven innings, he struck out five, walked one and gave up just four hits.

Castillo looked much more comfortable today. While Castillo didn’t strike out a ton of batters, he was able to induce a bunch of soft contact. Castillo relied on his 4-seam fastball and changeup to do so.

The four-seam and changeup had an average exit velocity (EV) of 78.5 mph and 88.5 mph, respectively. Compare that to his two primary pitches against the Cardinals, his sinker and slider, that had average EV of 93 mph and 90.8 mph, respectively. Overall, a nice bounce-back game for Castillo.

Lucas Sims came on in the eighth and made quick work of the batters he faced, striking out two and inducing a groundout on 15 pitches.

Amir Garrett came in to close out the game in the ninth and got off to a rocky start. Garrett loaded the bases on two hits and a walk, before giving up a grand-slam to Erik Gonzalez. Eventually he settled in, though, as he struck out the last two batters to give the Reds their fifth win of the season.

The Reds are off on Thursday as they head west for a six-game road trip. They’ll return to action on Friday night at 9:40 p.m. EST against the Diamondbacks, with Tyler Mahle set to make his second start. The Diamondbacks have yet to announce their starting pitchers for the weekend series, but Friday will be lefty Caleb Smith’s turn in the rotation.

Thanks! Glad you enjoyed it

One thing that makes me particularly happy is that even though the Reds are clearly getting luckier with some hits finding holes, there are still a number of hard luck outs each game.
But that got me to thinking, what’s the average unluckiest out of the game for each team? Are the Reds still luckier or unluckier than the normal team?

Hi, Michael! I was unable to find the exact stat you were looking for, but I thought it was a really interesting question, so I did some math. So far, the Reds have an average unluckiest out per game of .626. I worked out the averages of 9 other teams, and found that across these ten teams, the average unluckiest out per game has been .603. So, at least compared to these teams, the Reds are just slightly less lucky than average in this respect. Hope this answered at least part of your question.

Definitely answers it. Basically I’m just looking for a little bit of reassurance that the luck hasn’t swung all the way back to the Reds (which would lead one to believe that it’s less likely to continue). Thanks for following up and answering!

Sorry for the late reply! Yeah, after last season, I don’t blame Reds fans for being concerned that this team can only exist on one end of the extremes, when it comes to luck. Will definitely be keeping an eye on the expected numbers over on Baseball Savant.