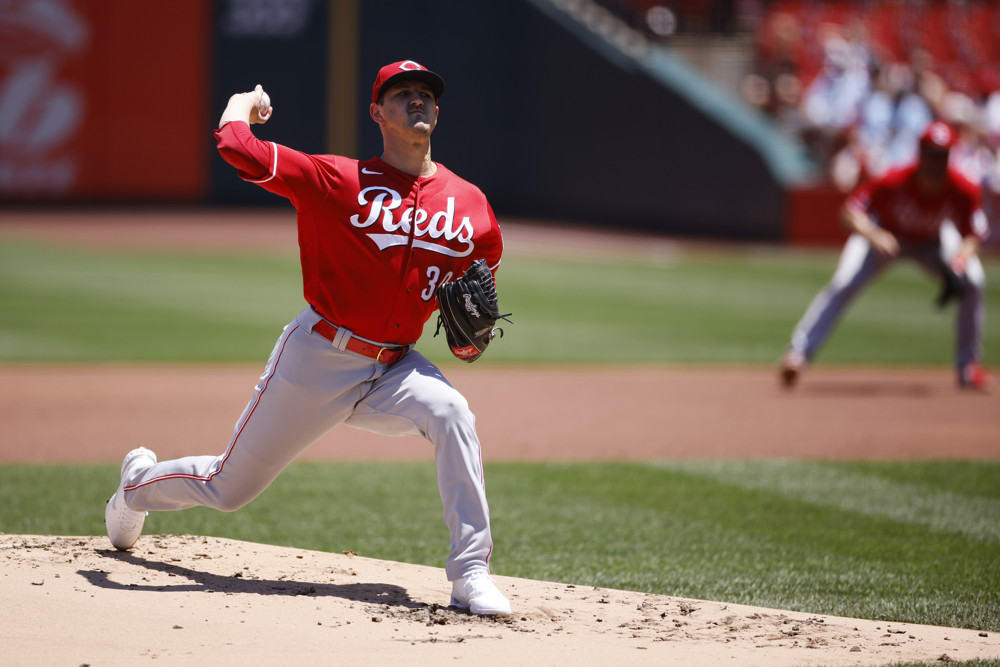 So, we’re having a bit of a contest here at Reds Content+. As we recap games over the season, we’re keeping track of the win/loss record of the individual writers, as well as their run differential. I came into tonight’s game with a -3 run differential.

I came out with +3. Watch out Spenser. I’m catching up to you.

In all seriousness, this was a fun game tonight. We got to watch a decent showing from Tyler Mahle and an incredible showing from the Reds bats in an 11-5 win over the Rockies. Let’s dive in.

The Redlegs came for blood tonight. Over the course of the night, they hit a lot of home runs. Not one. Not two. Not three. Four’s closer.

The bats came screaming right out of the gate. After a hard hit groundout to third base from Jonathan India, Winker singled to left field on the first pitch he saw. Just as John Sadak was beginning to comment on how the Red’s bats matchup well against Rockies starter Kyle Freeland, Nick Castellanos hit a 107.6 MPH screaming line drive over the right center field wall.

The fireworks continued in the second inning. Eugenio Suarez led off with a 108.8 MPH double to left field. He was brought home when Scott Heineman turned a hanging slider into a souvenir for a fan in the upper left field deck. While no other Reds reached first base in this inning, they all managed hard contact off of the Rockies.

We know math is hard but we're pretty sure 2 runs + 2 runs = 4 runs. pic.twitter.com/tOkYSlJJlW

The home runs continued in the third inning. After a walk from Nick Castellanos, Tyler Stephenson was able to reach first on an error, sending a ground ball through the legs of Ryan McMahon. With two runners on, Joey Votto hit another homer for the Reds, this one measuring 106.1 MPH off his bat.

The 3rd home run of the game is a 3-run dinger in the bottom of the 3rd. Coincidence? I think not. pic.twitter.com/xuqmNtvfbS

The Reds were only able to score one run in the 4th inning, when Kyle Farmer hit a 100.7 MPH line drive over the left field wall. Up until this point, the Reds average 97 MPH on all of their contact.

Tyler Stephenson decided to join in the fun during the 5th inning, hitting a 101.4 MPH home run over the center field wall. This brought Kyle Freeland out of the game, with Yency Almonte coming in for relief.

Another solo shot because why not. pic.twitter.com/B64oH710d0

During the 6th inning, the Reds decided to score some more runs. To make things more difficult for themselves, they decided to do it without any home runs and with two outs. After a respective groundout and strikeout from Shogo Akiyama and Jonathan India, Jesse Winker reached on a walk. This was followed up by a single from Castellanos. Tyler Stephenson then walked to load the bases. Winker was brought home when Votto was also walked. Another walk was issued to Mike Freeman, scoring yet another run.

The Reds were unable to score during the 7th or 8th innings. Pathetic.

Tyler Mahle pitched well during the first five innings of the game but struggled during the 6th inning. Overall, he pitched very efficiently, inducing a lot of ground balls. It’s possible that he was hoping to save the bullpen by pitching deep in the game. 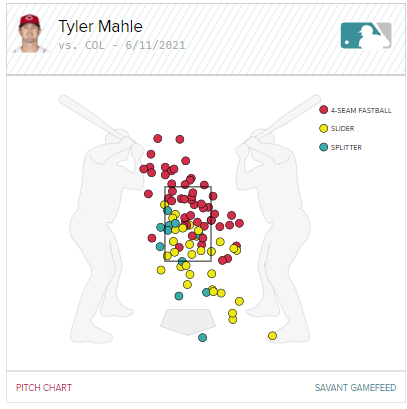 Mahle utilized three different pitches throughout the game. His 4-seam fastball tended to stay elevated, and was often used as a put away pitch. It was set up well by his slider, which was thrown lower in the zone, often moving far outside. His splitter was effective at inducing weak groundballs and was a big contributor to his efficiency through the first five innings.

Mahle struggled during the 6th inning. Connor Joe led of the inning with a weak single between first and second. This was followed up with an almost identical single from Raimel Tapia. With one out, Charlie Blackmon loaded the bases on an opposite field single. Connor Joe became the first Rockies run on a wild pitch to Trevor Story. Three more came on a home run off the bat of Ryan McMahon.

Overall, Mahle pitched 6 innings, striking out 6 and walking one. He gave up 4 earned runs on 5 hits — one a home run. Overall, it was another solid showing from the Redleg starter.

Ryan Hendrix came in to relieve Mahle during the 7th inning. After working two quick outs, he struck out Dom Nunez to end the inning. He struck out two more during the 8th inning, but he also gave up a home run to Brendan Rodgers.

Art Warren came in to finish the game in the 9th. After inducing a flyout from Ryan McMahon and striking out Garrett Hampson, Josh Fuentes reached first base on a ground ball to right field. With shouts of “Pizza, pizza, pizza!” Art Warren struck out Dom Nunez to finish the game and reward the crowd with LaRosa’s.

Here’s to hoping for another home run derby from the Reds! Tomorrow, the Reds go for the home series win against the Rockies. Game time is 4:10 PM EST, with German Marquez set to face off against Wade Miley.