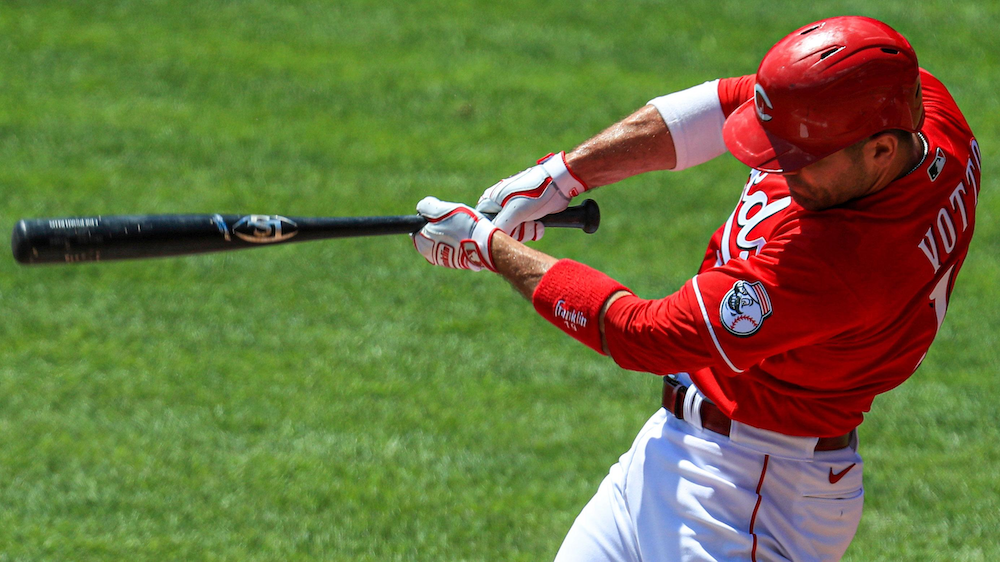 Joey Votto continued his absolutely bonkers streak with a homer in the 1st, and Luis Castillo pitched another gem, but the Reds found themselves down 3-2 going into the top of the 6th inning. That’s when the offense came back to life and reclaimed the lead, before ultimately running away from the Cubs in an eventful 7-4 win at Wrigley. With the win the Reds are now 54-49 and have thoroughly stabilized themselves after a rough couple of series after the All-Star break.

After a quick fly out from Jonathan India, Jesse Winker hit a double into the right field corner. Next, a Kyle Farmer groundout meant it was up to Joey Votto to try and get something out of the runner at second. And as is now customary, the 37-year old absolutely crushed an Alec Mills 4-seamer into the right center field stands (111.3 mph EV, 431 ft.).

With that homer Votto has now homered in five straight games, and has eight home runs total in those games. A Tyler Naquin bunt put another Red on base, but Eugenio Suárez flied out to end the inning.

After an exciting 1st inning, the offense stalled. Over the next three innings, they could produce only a single – by the pitcher – and a hit batter.

In the 5th inning, Castillo got his second hit of the day, setting up a big inning for the offense. No dice, though, as India hit into an easy double play, before Winker grounded out to end the inning.

Suddenly playing from behind, the offense needed baserunners. And they got them immediately in the 6th. A Farmer bloop single into right, and a Votto dribler against the shift put runners on first and second with nobody out. Next, the Reds got a little lucky as Naquin hit a groundball right to Wisdom at first who looked to field the ball, but then bobbled the ball before stepping on first, resulting in everyone being safe. Bases were now loaded for Suárez who grounded into a force at home.

Next up was Tucker Barnhart who, thankfully, fared a lot better as he hit a grounder up the middle for a single that drove in two runs.

Shogo Akiyama then went after the first pitch for a groundball single into right re-loading the bases with still just one out. Castillo would hit a bunt straight at Mills for an easy 1-2-3 double play. Nevertheless, the Reds had retaken the lead at 4-3.

The offense was not content with a one-run lead, as the 7th inning started with back-to-back singles from India and Winker. Farmer then ripped a groundball just fair past the first base bag for a two-RBI double.

Tack on ✌️ more for the @Reds pic.twitter.com/kYXRws7vxk

It was now 6-3 Reds. A Votto groundout advanced Farmer to third before pinch hitter Aristides Aquino brought him home on a sac fly. 7-3 Reds. Suárez would fly out to end the inning.

The offense was not done pushing the Cubs pitchers. In the 9th, Winker and Farmer hit back-to-back singles to begin the inning, but Votto struck out. The same did Aquino and Suárez stranding the runners on first and second.

On the mound for the Reds was Luis Castillo who was coming off an excellent start against the Cardinals in which he pitched seven innings, only giving up one run and striking out nine batters.

Working with an early lead, Castillo faced some trouble in the 1st inning, giving up back-to-back singles to Rafael Ortega and Willson Contreras. Next, Patrick Wisdom worked a full count, but Castillo was able to induce a groundball to Suárez at third for a 5-3 double play. Castillo then struck out Javier Báez to end the inning.

While the offense fell silent, Castillo pitched very well, allowing just a single and a walk in the following two innings, while striking out two Cubs.

In the 4th, however, things went a little awry. First, Castillo gave up a lead-off homer to Wisdom, and after this, a single to Báez. But he then struck out Ian Happ looking for the first out, struck out Matt Duffy looking for the second and got Jason Heyward to ground out for the third. Check out the pitches that got Happ and Duffy. Absolute paint job: 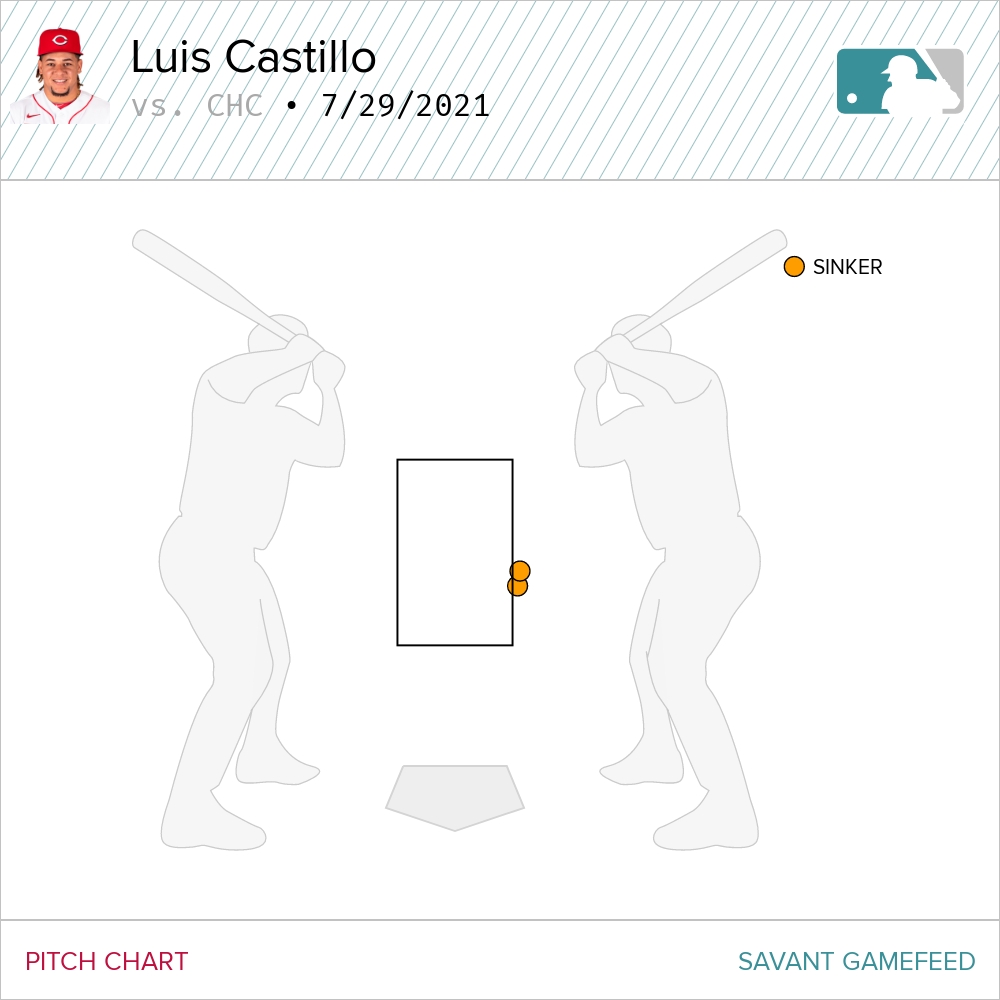 Unlike the 4th, the 5th inning got off to a great start. Castillo got two quick outs from David Bote and Mills. He then walked Ortega and threw a hanging slider that Contreras blasted over the center field wall for a two-run homer. Wisdom would strike out to end the inning, but it was now 3-2 Cubs.

With his pitch-count at 92, Castillo came out for the 6th inning. Having given up a lead-off single to Báez and facing a 3-2 count to Happ, Castillo and Barnhart brought out a beautiful strike em’ out, throw em’ out double play, before Castillo got Duffy to ground out to end the inning. Still 4-3 Reds.

That glove is gold for a reason. pic.twitter.com/HqXYGwnlIP

Castillo pitched really well again today, as he struck out eight batters while walking only two. He worked with a nice mix of pitches, throwing a 4-seamer, a sinker, a changeup and a slider. Especially electric was his 4-seamer. On 34 such pitches, Castillo registered a Whiff% of 62%(!) and a further eight called strikes. Together that gave him a CSW – which calculates the percentage of pitches that were either a whiff or a called strike – of 47%. Just for good measure, Castillo’s 4-seamer allowed an avg EV of just 79.3 mph. On a fastball!

Another interesting observation was the uptick in Castillo’s velocity. He already throws prette darn hard, but his pitches had a little extra life today. Castillo’s pitches showed extra velocity across the board, with his slider standing out as it reached 90.2 mph and averaged 88.4 mph, which is 2.5 mph higher than his yearly average. But Castillo had all his pitches working today, as is evident from his strikeouts: 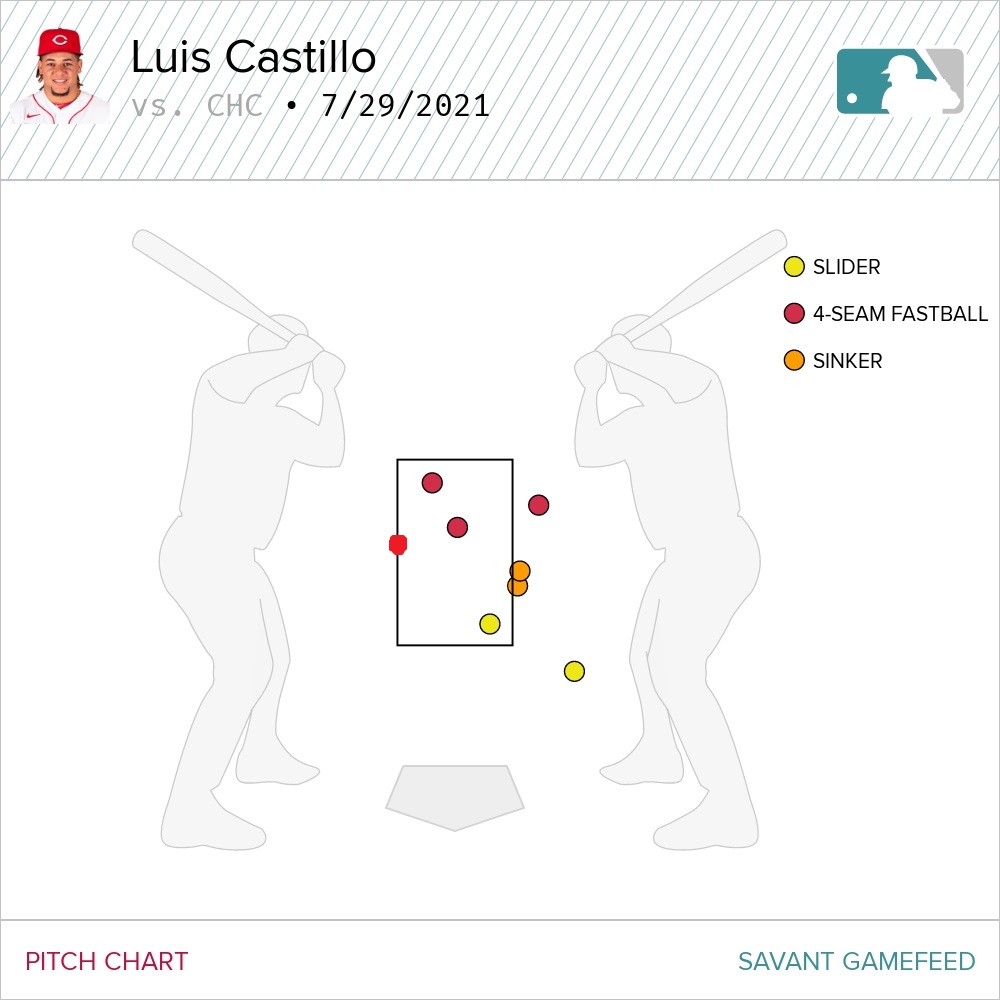 For some reason Castillo’s last strikeout was not shown on the image from Baseball Savant. As such, I’ve had to put my artistic talents to use for that last red dot.

Brad Brach entered the game in the 7th inning, with the Reds now up by 7-3, and he did his job inducing two flyouts and a groundout for a clean inning.

Next came a very pleasant Reds debut from newly acquired Mychal Givens. The right-hander, came over in a trade with the Rockies, made one of the best first impressions imaginable, striking out the side on eleven pitches.

Entering the game in the 9th was Heath Hembree who, after inducing a groundout from Báez, allowed a home run to Happ which reduced the lead to 7-4. But a groundout from Duffy and a strike out of Heyward sealed the win for the Redlegs.

Tomorrow the Reds continue their roadtrip as they travel to Queens to take on the Mets in a three-game series at Citi Field. For the Reds, it will be Sonny Gray on the mound, while Carlos Carrasco will be making his Mets debut, and his first start since September 25 2020. Carrasco has been dealing with a rather serious hamstring injury, and will no doubt be on a strict pitch count. First pitch will be at 7:10 PM EDT.

Votto has now homered in 6 straight games, not 5. Five consecutive games with a HR tied the Reds record with a number of players I listed here the other day. Six consecutive breaks the franchise record. And it’s a very old franchise.

Don’t know how that one slipped through. You are of course right, it is now six games. Absolutely ridiculous. I never got to see Votto at the height of his greatness, so this is a real treat to see.

Bell is like a kid in a candy shop with his 3 new relievers, I love it.

Givens has a very effortless pitching motion, pleasing to the eye.

Givens was everything we could hope for yesterday. Looking at his numbers away from Coors, it’s not hard to see why the Reds targeted him: a 3.07 FIP while not allowing a single home run. Excited to see if he can be another high-leverage guy.

Thanks for putting in that last red dot, Steffen, it looks as good as the others.

Glad to hear it!

The radio crew noted at length how bothered – angry even – that Castillo was after the HR by Contreras. He was bugged by the previous walk, but didn’t take care of business with Contreras. After the homer he decided to really ‘bear down’ and so overwhelmed the following hitter. I wonder if he can carry the ‘bearing down’ and blowing away hitters in key situations into his next starts. He certainly seems capable of being that kind of top of the rotation pitcher.