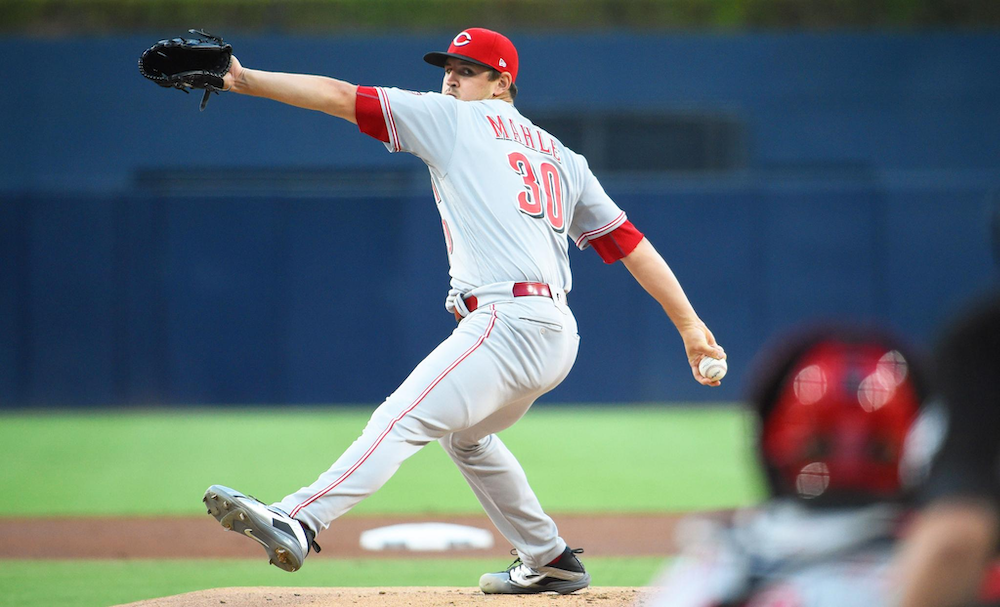 VOTTO! VOTTO! VOTTO! Joey Votto smashed two more home runs tonight making it 5 straight games with a homer. He gave the Reds the lead in the 2nd inning with a solo HR and then followed it up with a 2-run home run in the 9th inning. Jesse Winker had yet another great game at the plate as he finished 2-5 with 2 doubles and an RBI. Tyler Mahle threw 6 six scoreless innings for the Reds in an outing that he had to battle for every single out. The Reds never let up off the gas as they cruised to an 8-2 win over the Cubs. The Reds are now 53-49 and are 7.0 games behind the Brewers and 5.0 behind the Padres for the second Wild Card spot.

Joey Votto got things going for the Reds in the 2nd inning with a solo HR to left field giving the Reds the 1-0 lead. The home run ties the Reds franchise record with a home run in five straight games. It also made it the 22nd straight game that Votto has reached base safely – 2nd longest streak in the MLB currently.

Jesse Winker continued his hot hitting in the 3rd inning as he doubled into center field scoring Jonathan India after he was walked. The Reds however stranded Winker on second base after Tyler Stephenson grounded out and Eugenio Suarez grounded into a force out. Joey Votto was intentionally walked to get to Suarez and the gamble by the Cubs paid off keeping it a 2-0 Reds lead.

India and Winker got the Reds started again in the 5th inning with a single and double, respectively. Tyler Stephenson then roped a hard line drive into left field scoring both India and Winker, but he was thrown out as he attempted to reach second base. With one out in the inning, Joey Votto recorded his second walk of the game, but the Reds were unable to get him home as Suarez struck out and Kyle Farmer flew out to right field.

The Reds tacked on another insurance run in the 8th inning to make it a 5-0 game as Cubs pitcher Dillon Maples struggled to find the strike zone. Suarez led the inning off with a double to center field followed by a Kyle Farmer hit-by-pitch. Tyler Naquin advanced the runners with a ground out to the first baseman. Pinch-hitter Max Schrock came into the game and worked a walk to load the bases for the Reds. Shogo Akiyama pinch-hit in the pitcher’s spot and was hit by a pitch to bring a runner home. A popout and groundout by Jonathan India and Jesse Winker would strand the bases loaded for the Reds, however.

Joey Votto added to the fire with a two-run HR in the 9th inning – back-to-back games with 2 HRs and 7 HRs in 5 games. It’s safe to say Votto has been electric lately for the Redlegs. He finished the game 2-3 with 2 HRs, 3 RBIs, and 2 BBs. It almost seems as if Votto is saying that having two MVP candidates on the Reds’ team wasn’t good enough.

We promise this isn't spam… Joey Votto is just that good. pic.twitter.com/8ibUvQYwrf

The Votto homer gave the Reds the 7-0 lead and Kyle Farmer followed it up with a single. Farmer extended his solid stretch of hitting as he finished the night 2-4 with a single and a double. Tyler Naquin walked and Shogo Akiyama doubled Farmer home with a line drive into left-center field lengthening the Reds’ lead to 8-0. Jonathan India nearly batted in another run but Left Fielder Ian Happ made a diving catch to end the inning.

Tyler Mahle did what he has done all season long: batted through another solid start for the Reds. Mahle certainly did not have his best stuff tonight, but he was able to get out of jams and hold the Reds’ lead. He had baserunners in each of the first four innings but managed to allow none of them to cross home plate partly due to some great fielding plays by the Reds defense. 9 total runners were left on base in the first 4 innings.

Mahle was able to get out of a bases-loaded jam in the 1st inning on a great catch in RF by Aristides Aquino saving at least two runs from the Cubs. Mahle had given up a single, double, and then a walk to force the base loaded but no damage was done. Into the second inning, Nico Hoerner doubled into left field with one out for the Cubs. Mahle was able to get Cubs’ pitcher Zach Davies to ground out and then Jonathan India made a diving catch on a liner hit by Rafael Ortega to end the inning.

In the third inning, Mahle hit Kris Bryant to start the inning and it appeared it was going to be another hectic inning for Mahle. Yet, he was able to get three straight outs through the heart of the Cubs’ batting order – Anthony Rizzo, Patrick Wisdom, and Matt Duffy.

Tyler Mahle found his rhythm in the fourth inning as he struck out two consecutive batters to start the inning – his first strikeout of the game. Nico Hoerner did manage to reach on a single to center field, but yet again Aristides Aquino saved the inning with a phenomenal over-the-shoulder catch in right field to end the inning. Mahle then cruised through the fifth and sixth innings allowing one hit with very easy outs to finish his start for the night. He finished the game with 6.0 IP, 5 hits, 1 BB, 2 SO. Yet another much-needed strong start from Tyler Mahle as he continues to show his importance to the Reds rotation.

The Reds did not take long to make use of their newly acquired relievers as they brought in Luis Cessa to pitch in the 7th inning. He made quick work of the Cubs getting two easy flyouts and a strikeout to hold the Reds lead at 4-0 after 7 innings. Cessa flashed his filthy slider and changeup as he struck out Nico Hoerner in his first outing with the Reds.

Also obtained from the Yankees, Justin Wilson, came into the game in the 8th inning and threw a scoreless inning. He walked his first batter on four pitches but then settled in to pick up three straight outs.

Ryan Hendrix came on in the 9th inning for the Reds with an 8-0 lead and allows a two-out single to score a run to end the Reds shutout over the Cubs. Another single by the Cubs warranted them another run off of Hendrix to make it an 8-2 game. Hendrix finally managed to get out of the inning with a flyout to left field by Cubs’ Rafael Ortega and end the game.

The Reds will face off tomorrow in the series finale versus the Cubs as they look to cap off another series victory over the Cubs. Ace Luis Castillo will pitch against the Cubs’ Alec Mills with Luis Castillo looking to continue his dominance as of late. The game start time is set for 2:20 pm at Wrigley Field.

Mahler started throwing his breaking pitches for strikes in the 4th inning and from there he was a different pitcher. Cessa looked as expected. Wilson looked better than expected. He was even robbed of a called strike during that 4 pitch walk.

During his prime (his early one, that is) a lot of people (including me) felt that Votto could hit 50+ HRs in a season if he made that a goal. We’re seeing evidence to support that now.

Detroit 17, Minnesota 14. So the Lions beat the Vikings ?