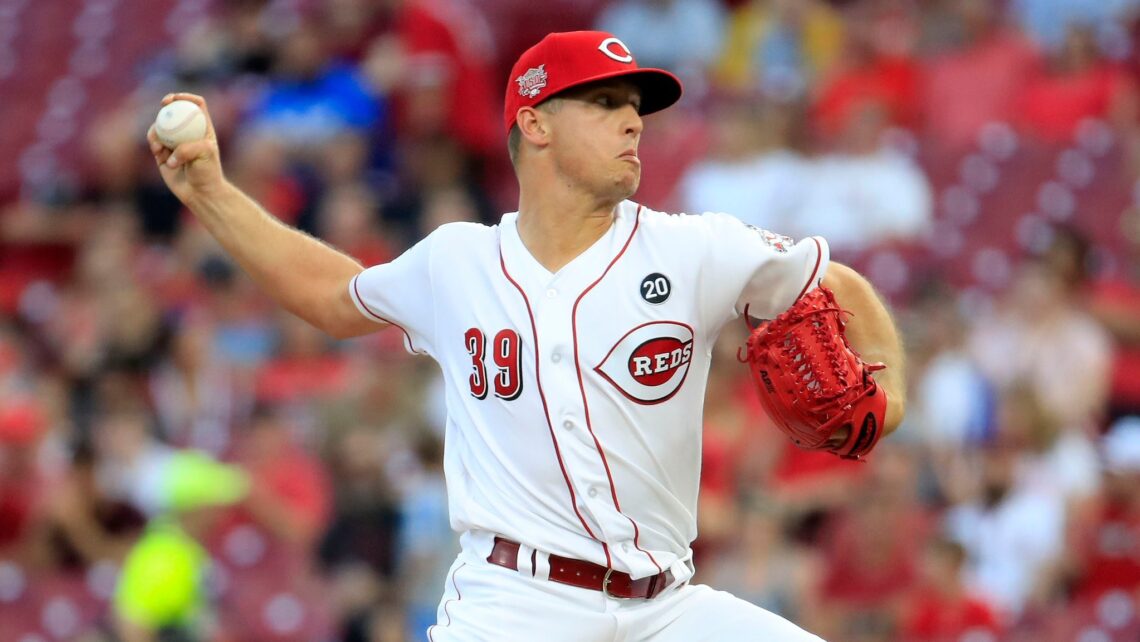 The Reds loaded the bases twice – once with nobody out and then an inning later with one out – and came away from those situations with just one run. Sonny Gray was shaky and gave up three runs in just 4.2 innings. If I’d told you that before the game, you wouldn’t think highly of the Reds chances. But the bullpen was, for the most part, sharp and the offense produced early and late to give the Reds a 7-4 win and a series victory over the Phillies. With the win, the Reds improve to 64-55, and still hot on the tail of the San Diego Padres in the Wild Card race.

After being embarrassed by Matt Moore yesterday, it was nice to see some early action from the offense today, as lead-off hitter Jonathan India gave the Reds a 1-0 lead on a line drive home run into the left field stands (107.6 mph EV, 381ft.)

Things got a little dicey after this, though, as Jesse Winker flied out before Nick Castellanos was rung up on this fastball: 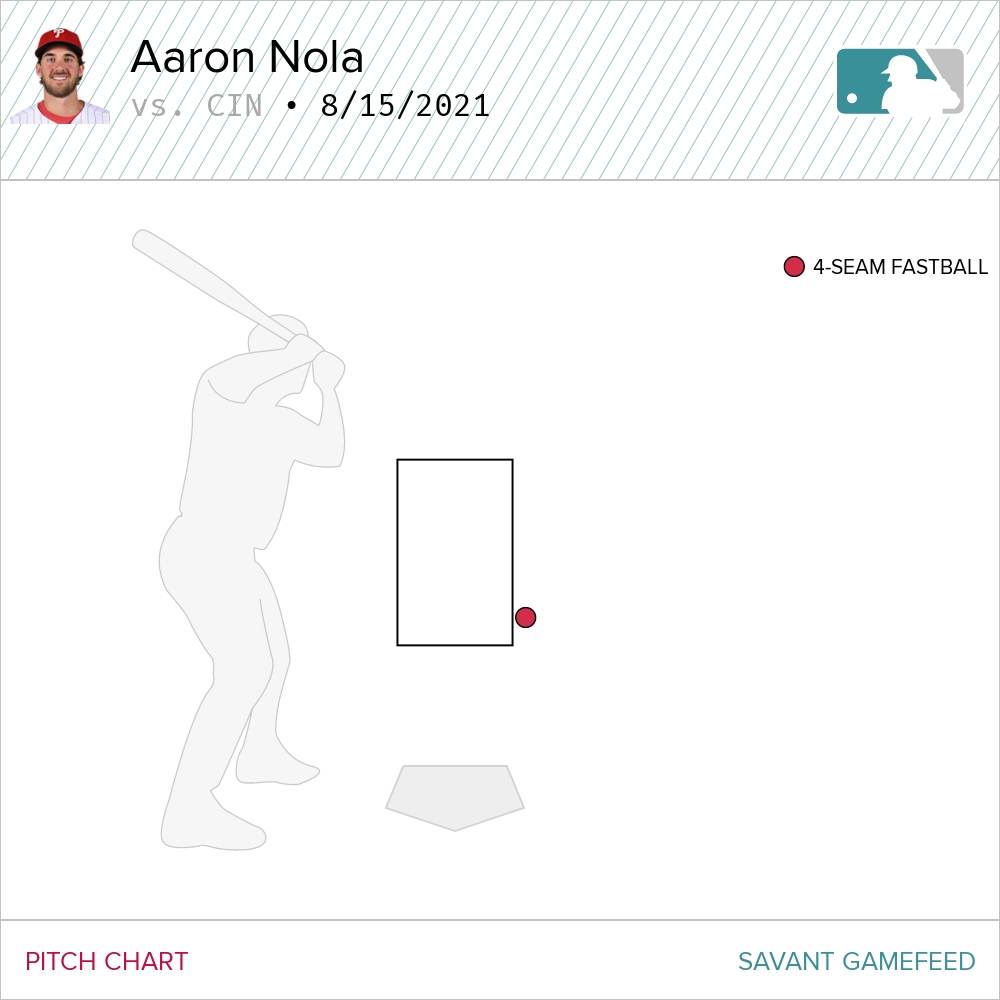 A few choice words from Castellanos led to him and later manager David Bell to be tossed from the game. Joey Votto struck out to end the inning. A welcome change from yesterday, but not the greatest start to the game.

The 2nd inning was a quick 1-2-3 that included another two strikeouts.

The offense had things brewing again in the top of the 3rd inning. After a Tucker Barnhart groundout, Sonny Gray hit a single up the middle. Next India hit another line drive towards left field, this time for a single. Winker flied out again before Shogo Akiyama – who had entered the game after Castellanos’ ejection – sliced a ball down the left field line that just stayed fair for a double that scored both Gray and India.

Votto popped out to end the inning, but it was now 3-0 Reds.

The offense continued their great day in the 4th. A lead-off walk from Mike Moustakas, a Tyler Naquin single and a Kyle Farmer HBP had the Reds in position to blow the game wide open with the bases loaded and nobody out. The Reds would get nothing, however, as Barnhart flied out and Gray hit into a double play. The lead was still 3-0, but this felt costly.

In the 5th inning, the offense was giving Nola trouble again. Another India single and walks from Aristides Aquino – who had taken over for Winker in left field – and Votto would load the bases again, this time with one out. Once again, though, the Reds looked incapable of capitalizing, as Moustakas – now facing left-handed reliever Bailey Falter – struck out looking. This left the Reds’ run-scoring hopes in the hands of Naquin whose wRC+ against lefties coming into today sat at 46. But Naquin was able to work a walk, increasing the Reds’ lead to 4-1. Farmer then flied out to end the inning.

The offense went down quietly in the 6th and 7th innings, with no one reaching base and three batters striking out.

Desperately needing some insurance runs, the offense finally showed life again in the 8th. After two quick outs, Farmer hit a ball up the middle that Gregorius threw out of play allowing Farmer to reach second. Next, Barnhart got the benefit of this call on 1-2: 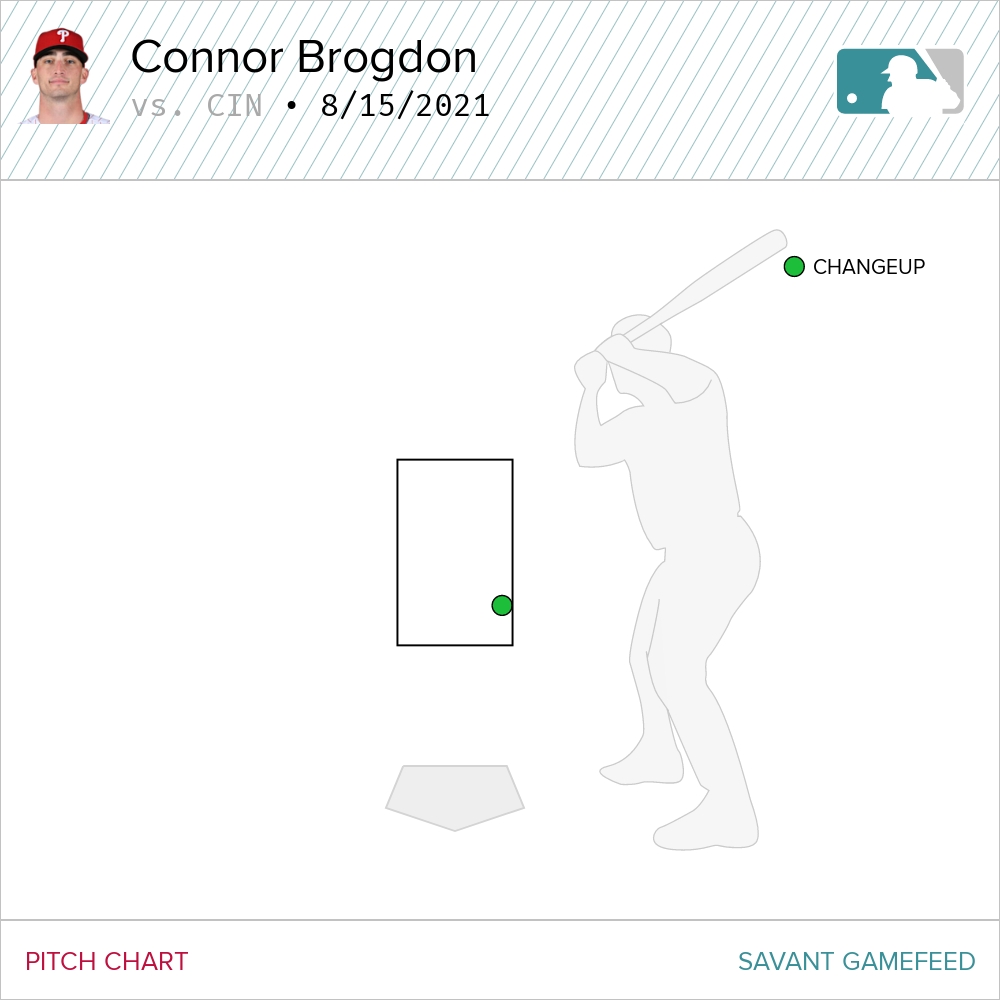 That would prove huge, as Barnhart then delivered a double into the right field corner that scored Farmer easily, giving the Reds a 5-3 lead.

Pinch hitter Tyler Stephenson would then make the Reds lead even more comfortable with a three-run home run into the left field stands (100.9 mph EV, 383ft.).

India struck out to end the inning, but it was now 7-3 Reds.

Akiyama reached second in the top of the 9th, but it was an otherwise uneventful inning for the Reds, and the score remained 7-4.

On the mound for the Reds today was Sonny Gray, who was coming off a solid outing in a loss to the Braves on Tuesday. In that game he went five innings, allowed three runs and three walks while striking out eight batters.

Gray had a smooth 1st inning getting a line out, a fly out and a groundout from the top of the Phillies’ order. It was another 1-2-3 inning for Gray in the 2nd, but there was some cause for concern.

Through two innings, Gray had yet to strike out a batter and had just one whiff on nine swings and nineteen pitches. Even more concerning, though, was his average EV which sat at 96.2 mph, while the Phillies had a .422 xBA. Gray was getting lucky.

Now pitching with a more comfortable lead, Gray finally got his first strikeout to lead off the 3rd inning. He did allow a single to Odúbel Herrera, but got out of the inning with no further damage.

With the Reds’ offense having just squandered a perfect run-scoring opportunity, it felt almost inevitable that the hits would start dropping for the Phillies. After a lead-off triple into the left center field gap from J.T. Realmuto, Bryce Harper hit a sacrifice fly into center field, reducing the Reds’ lead to 3-1. Gray did walk two batters, but struck out Andrew McCutchen and got Ronald Torreyes to ground into a force out end the inning.

In the bottom of the 5th inning, Gray found himself in major trouble. Two singles and a HBP had the bases loaded with just one out, and facing Gray was Harper, who had a .568 SLG coming into the game. Gray walked Harper and a Gregorius sac fly made the Reds’ lead shrink to 4-3. This would be Gray’s last batter faced.

It’s fair to say that Gray did not have his best stuff working today. In 4.2 he struck out only two batters and walked three. For a pitcher who strikes out 11.62 batters per nine, this is a red flag. Gray accumulated two whiffs on thirty-eight swings for a Whiff% of 11, and didn’t get a single whiff on his sinker – his primary pitch. Gray isn’t a huge whiff pitcher, but those numbers are real bad. On top of this, he let sixteen balls be put in play with an average EV of 88.4 mph. Just an off day from Gray.

Taking over for Gray was Lucas Sims who wasted no time as he struck out McCutchen looking on a filthy slider. The Reds had retained the lead for now. Sims followed his huge strikeout in the 5th with a clean 1-2-3 inning in the 6th, collecting another strikeout in the process.

Michael Lorenzen came into the game to pitch the bottom of the 7th inning. Lorenzen walked two batters, but was able to pitch out of trouble for a scoreless inning.

Tasked with getting three outs in the 8th was Luis Cessa. Cessa got two quick outs, but then allowed back-to-back singles to Herrera and Torreyes, giving the Phillies runners on the corners. Then Alec Bohm would hit a double past the glove of Aquino in left field for a stand up double, scoring Torreyes from third and advancing Herrera to third. Cessa was then pulled from the game.

Taking over was Mychal Givens who got Jean Segura to fly to right for a quick out, but the score was now 7-4 Reds. Givens stayed in the game to pitch the bottom of the ninth. His only blemish in the inning was walking Harper, but otherwise he was really solid striking out two batters and inducing a groundout to end the game.

Tomorrow the Reds return to Cincinnati to take on the Chicago Cubs at Great American Ballpark in a three-game series. For the Reds, it will be Wade Miley on the mound, while the Cubs will turn to Justin Steele who will be making just his second start in 2021. First pitch will be at 7:10 PM ET.

I was worried about this road trip and the Reds went 3-3. Could have been better (the extra inning loss) but not a disaster.

Glad you enjoyed it! I felt the same way. Obviously the Reds need to keep winning, but this felt like a real prove-it roadtrip against two teams with playoff hopes of their own. The Braves series was a little disappointing, but it was great to see them bounce back against the Phillies. Now they have to take care of the Cubs, and definitely not underestimate a young, promising Marlins team.

I won’t belabor the point but with India banged up, Castellanos ejected, and Winker leaving early, and a short bench because the Reds insist on carrying unnecessary relievers, wouldn’t it have been nice to have Nick Senzel on the team yesterday?

Yes, several times there was a role for Senzel. Pinch hitting for Moustakas or Naquin against the LHP with bases loaded (Moose took a called third strike). Or as a double-switch candidate so Lucas Sims wouldn’t have to bat in the 6th inning of a 1-run game. It just seems so utterly stupid for Krall to say that because Senzel wouldn’t have a regular starting job that he couldn’t help the team. That’s so far from true, particularly with the way Bell manages. UNLESS, there is more to the Senzel decision than Krall has let on. If you read C Trent’s post at The Athletic this morning, he talked with Pat Kelly who has been managing Senzel. It sounds like Senzel, while healthy, isn’t playing well enough. That may be Kelly covering for Krall.