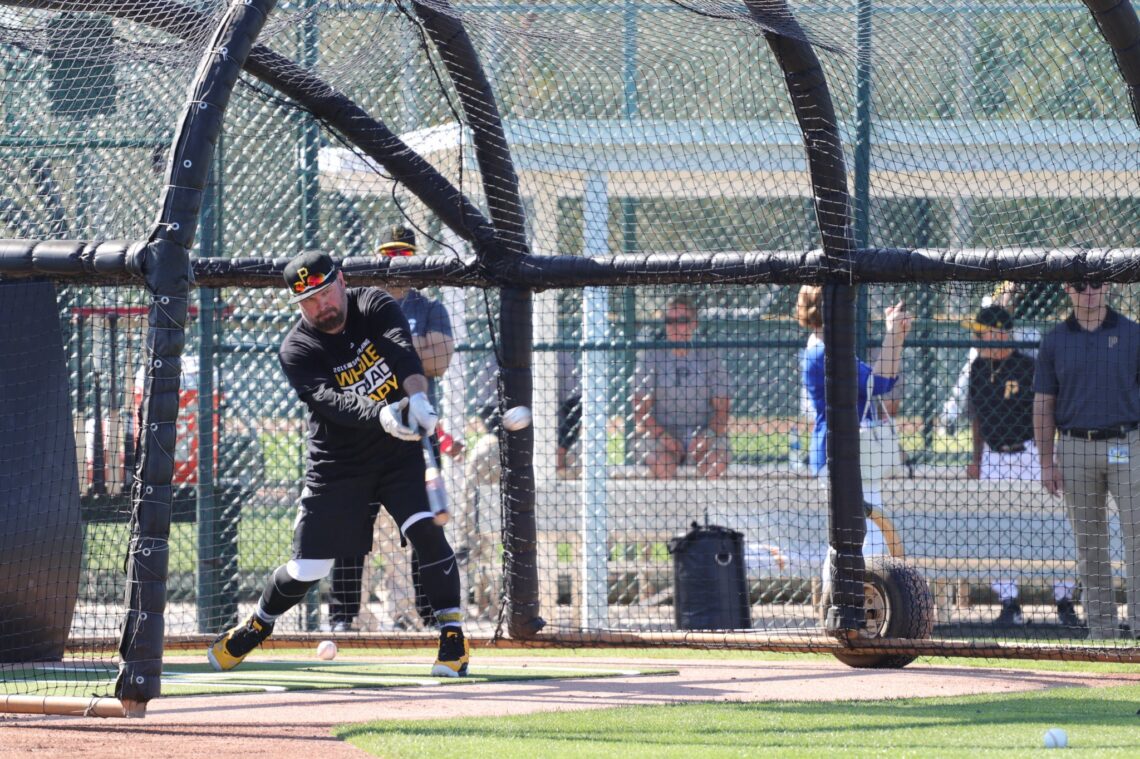 Last year, as in several years prior, the Reds and Pirates traded bean balls like they were Beanie Babies in 1997 (ask your parents, kids). There was an airing of grievances by Reds skipper David Bell, which fell upon the deaf ears of Rob Manfred, and it all finally boiled over into the feats of strength portion of the incursion. And as Amir Garrett rained blows upon the entire Pittsburgh bench, we all thought that there had to be another way!

Fortunately, that better way appears to be upon us. The lead scoundrel of the Jolly Roger, manager Clint Hurdle, was relieved of his duties on September 28, so this season will begin a new — and hopefully more harmonious — chapter of Pirates baseball.

As we look back on 2019 for the Buccos, it was little more than a series of fisticuffs on the field and in the clubhouse. They finished in the NL Central cellar at 69-93, 22 games out of first place and 6 games behind the fourth-place Reds. The year began in Cincinnati with a dramatic loss at the hands of Derek Dietrich, whose 3-run homer in the bottom of the 7th inning gave the Reds the lead they would not relinquish. Fast forward 10 days and the Pirates are finishing off a 4-game sweep at home over Cincinnati to move their record to 5-3 on the season. But Dietrich had struck again with a HR on that Sunday afternoon that Pirates pitcher Chris Archer thought he admired too long, and yada, yada, yada, Yasiel Puig vs. a sea of mustard yellow jerseys as poor Tucker Barnhart clings to his leg.

Moving forward, the only month of the season (save for a 2-game split in March) they were above .500 for the month was April, in which the finished 15-14. They would have a decidedly more intense brawl in Cincinnati on the final day of July, in which relief pitcher Kyle Crick was among those suspended. He was also involved in a fight with bullpen mate Felipe Vazquez, and with bullpen coach Herbie Andrade on separate occasions during the season. Another relief pitcher Keone Kela, who was also suspended for his actions in the July 31st brawl in Cincinnati, was also suspended for an altercation with Pirates performance coach Hector Morales. Furthermore, Vazquez, who was an All-Star in 2018 and 2019, was indicted on multiple counts of sexual assault.

There was reason to be optimistic about the rotation entering the season, having acquired 2-time All-Star Chris Archer at the trade deadline. Trevor Williams had posted a solid sophmore season with an ERA+ of 126 in 2018, 26-year-old Joe Musgrove had the best season of his young career in his first season with Pirates. But the bright spot was up-and-coming Jameson Taillon. Taillon had battled a myriad of injuries throughout his career missing the 2014 season after having Tommy John surgery at 22-years-old, missing all of the 2015 season with a sports hernia, and missing the first half of the 2017 season due to a bout bout in which he thankfully beat testicular cancer. But in 2018 he made 32 starts with a 122 ERA+ and a 3.58 xFIP and was looking to build on that strong performance. But after leaving a start early in May of 2019 with a forearm injury, Taillon had to undergo his second Tommy John surgery in 5 years which won’t see him back until 2021.

On the offensive side, Josh Bell was the standout. Making his first All-Star game and selected to start as the team’s DH, Bell ended the season with 37 HR, a .378 wOBA, and 135 wRC+. Outfielder Bryan Reynolds and shortstop Kevin Newman also had breakout years posting wRC+ of 131 and 110 respectively. Starling Marte missed some time after colliding with teammate Erik Gonzalez in mid-April but put up 119 wRC+ in 132 games in what would be his final season in Pittsburgh. Corey Dickerson was having a fine year with 132 wRC+ in 44 games before being shipped across Pennsylvania to the Phillies at the trade deadline.

Most of the offseason moves were not of the on-field variety. Trading Starling Marte, who had been the face of the franchise since Andrew McCutchen was dealt in January of 2018, was the largest move accompanied by smaller signings such as pitcher Derek Holland and outfielder Jarrod Dyson. Skipper Clint Hurdle was not the only head to roll after their last place finish. Longtime general manager Neal Huntington was let go near season’s end and team president Frank Coonelly was shown the door as well.

Coonelly was replaced by business minded Travis Williams who spent 11 years across the way with the Pittsburgh Penguins, 8 of them as COO. Ben Cherington took over the reigns as GM, he comes with a World Series winning pedigree having been the GM of the Boston Red Sox from 2011-2015. Cherington went right to work bolstering his staff by adding Steve Sanders as Assistant GM, Sanders had previously been Director of Amateur Scouting with the Toronto Blue Jays and was responsible for drafting and developing Cavan Biggio and Bo Bichette among others.

Derek Shelton replaces Clint Hurdle at the head of the Pirate bench. A former catcher in the Yankees farm system, Shelton was the hitting coach for Cleveland and Tampa Bay, quality control coach for Toronto, and bench coach for Minnesota along the way as well as minor league manager in the Yankees system from 2000-2002.

Shelton has his work cut out for him in 2020. His outfield projects to be Bryan Reynolds, Jarrod Dyson, and Gregory Polanco. As stated, Reynolds had a fine season last year and could be the real deal. Coming over from San Francisco in the Andrew McCutchen deal, his wRC+ was never below 120 in the minors while he improved his walk rate after joining the Pirates system from 6.8% in 2017 at High-A to 11.2% in 2018 in AA and kept it at 12.3% in AAA before being called up to the majors where it dipped to 8.4% but still led the team with a .377 OBP. If he continues to take strides like last season, he may be a thorn for NL Central pitching for years to come.

Polanco, once a star in the making, has had trouble staying on the field, playing in only 280 games in the past 3 seasons, including 42 last season after having surgery on his throwing should in September 2018. That has carried over to this season, as he started 2020 on the IL after testing positive for COVID. Dyson spent the last 2 seasons with the Diamondbacks but is likely best known for his role on the World Series winning Royals. He profiles as a Billy Hamilton type, stealing 30 bases in 5 of his 8 full seasons in the majors but never having an OBP above .340 and a wRC+ last season of just 69.

Slugger Josh Bell will anchor the infield along with Adam Frazier at 2B, Kevin Newman at SS, and Colin Moran at 3B. Bell and Newman had breakout seasons in 2019, but Newman’s 12 HR last year were 3 fewer than he had in 7-plus seasons of minor league baseball. His .333 baBIP improved his batting average and OBP to near career highs, coupled with his power spike that may have been a product of the “juiced ball,” which may spell disappointment if the Pirates are indeed counting on him to repeat. ZiPS projects Newman’s wOBA to normalize to .304 this season from last year’s .339 and his wRC+ to come down to 87 versus last year’s 110. ZiPS projects Frazier to be league average at second with a 100 wRC+, Moran to be equal with Newman at 87, and Bell to prove that he was no fluke at 120 with a .355 wOBA.

Top prospects Ke’Bryan Hayes and Oneil Cruz could impact the infield should Pittsburgh call them up. But in a shortened season that doesn’t appear to hold a playoff run in the Pirates’ cards I wouldn’t expect to see the glove-first 3B or the power forward SS. Starting their service clock seems ill-advised, though the new front office brass may be interested in seeing how they fair against major league pitching. The number one prospect in the organization, on the other hand, debuted last season and figures to contribute heavily this season. RHP Mitch Keller made 11 starts for the big club last year, posting a 3.47 xFIP with an eye popping 12.19 K/9 across 48 innings pitched.

Keller settles into the third slot in the rotation behind Joe Musgrove and Trevor Williams. Keller boasts a fastball in the mid-90s and a potential plus curveball. In 2019, he largely scrapped a mediocre change-up in favor of a slider that acts more like a cutter, and it became a valuable asset once he got the feel for it. His K/BB rate of 65/16 in his 48 major league innings is pretty enticing and it will be interesting to see if he can continue moving forward this season. Chris Archer will miss the 2020 season after having thoracic outlet surgery, leaving some combination of Steven Brault, Chad Kuhl, and Derek Holland to fill most of the starts in the back end of the rotation. Brault pitched 113.1 innings to a 5.04 xFIP last year, while Kuhl is rebounding from Tommy John surgery and Holland mustered a 5.25 xFIP in 84.1 IP between the Giants and Cubs.

If they can keep their fists to themselves, Keone Kela and Kyle Crick project to hold down the back of the bullpen, while a veritable “who’s that” of pitchers form the rest of the relief staff. Richard Rodriguez, Michael Feliz, Chris Stratton, and Nick Burdi all project to pitch the most innings and all project for an xFIP in the mid-4s.

The Pirates are off to dreadful start. They come into this series 3-13. ZiPS projected them to again finish in the cellar of the highly competitive NL Central. A 26-34 record is pretty respectable given the level of competition and level of depth and talent on the team — though it now seems optimistic. Some of the young guys like Reynolds and Keller may make for some fun, but unless more of their young prospects come to the majors, there won’t be much for Buccos fans to tune in for.