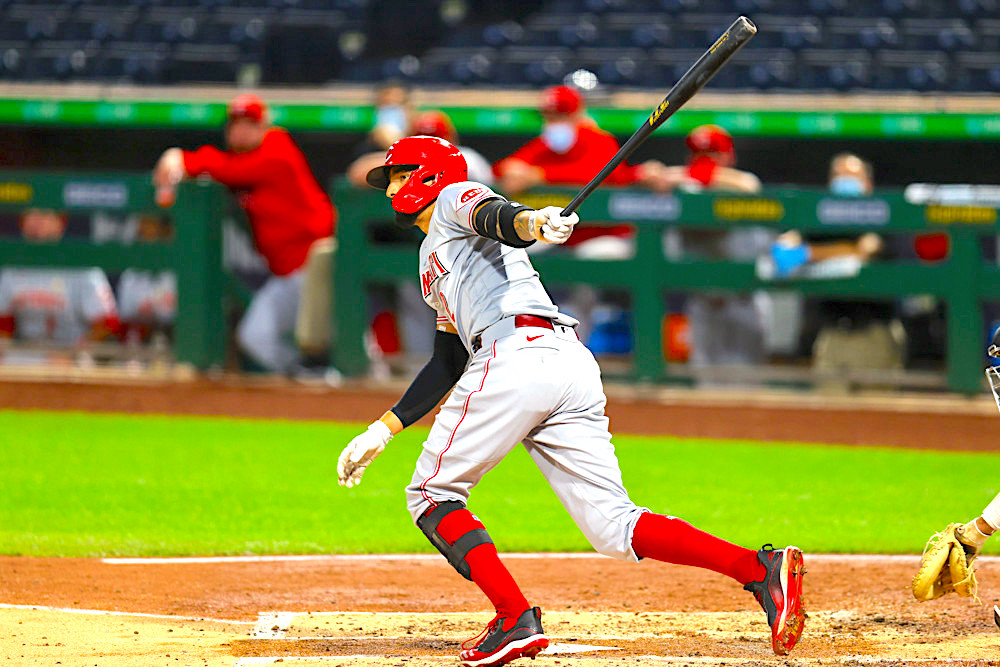 What a great day for baseball! The sun is shining, the weather is warm and the cicadas are abuzzin! Random thought, by the way: Cicadas have such dismal lives. After living SEVENTEEN YEARS underground, they come up for just a few weeks before they die. And they don’t even get to watch baseball.

What a dismal life indeed.

Anyway, the Reds played extremely well today. The offense came roaring to life, and the pitching was strong. Overall, fans in the Queen City got to watch a fun game. Hopefully, today is an indication of good things to come.

Can you believe that the Reds scored this many runs, with Winker not even in the starting lineup? After a quiet first inning, the bats came roaring to life during the second. Tyler Stephenson led off the inning with a four pitch walk. Max Schrock followed this by hammering the ball into the right field seats. The ball registered at just under 104 MPH off the bat of Schrock.

With the bases empty, Tucker Barnhart hit a 95 MPH line drive into right field and came cruising into second with a standup double. After a weak pop out from Kyle Farmer, Shogo Akiyama joined Barnhart after an eight pitch at bat ended in a walk. After a fly out from Wade Miley, Eugenio Suarez walked to load the bases. Tyler Naquin then ripped a two out line drive (105.8 MPH off the bat) to right field, plating Barnhart and Akiyama. Nick Castellanos almost added to the total with a monster shot to centerfield, but the ball was caught just feet away from the fence.

The offensive momentum did not slow down during the third inning. After a groundout and strikeout respectively to Tyler Stephenson and Max Schrock, Tucker Barnhart reached on an opposite field single.  Kyle Farmer brought in two more runs with a 95 MPH home run over the left field fence.

This two-out, two-run thunder is brought to you by @KFarm17. 💥 pic.twitter.com/6cAYlQTsIp

After a quiet fourth inning, the Reds added to their total during the fifth. Nick Castellanos led off the inning with a single to left field. After a pop out from Tyler Stephenson, Max Schrock tripled to deep right center field, scoring Castellanos. He was later brought home after Kyle Farmer singled up the middle. The inning ended after Shogo Akiyama lined out to Jean Segura. Although the batted ball still ended in an out, it is worth noting that his line drive was recorded at 101.3 MPH off the bat, good for a .870 xBA.

Max Schrock knocked in three runs and finished a single short of the cycle before exiting the game in the 7th with a calf injury. pic.twitter.com/0141WpSveb

The offense also put up a good show in the seventh inning. After the singing of “Take Me Out to the Ballgame”, the Reds were able to load the bases from a respective single, double and walk from Tyler Stephenson, Max Schrock and Tucker Barnhart. With a home run, triple and a double, Schrock was actually just a single away from hitting for the cycle, but he was removed from the game with a potential injury. With the bases loaded, Kyle Farmer slapped a line drive double down the right field line, bringing two more runs home. Interestingly enough, at this point in the game, Farmer was just a triple away from hitting for the cycle. Barnhart then scored on a groundout from Akiyama.

Truth be told, I was nervous for Wade Miley today. Coming off of the injured list, I didn’t know if Miley was going to have to shake off any rust. He didn’t seem to have any problems, though. In fact, he seemed like he improved the longer he pitched.

Miley’s first two innings made me begin to be worry. While he didn’t give up any runs, he also didn’t strike anyone out, gave up three hits and walked two. He almost gave up an additional hit, but Nick Castellanos made a fantastic catch in right field, off a line drive from Andrew McCutchen.

The Phillies first and only run came in the third inning, after Jean Segura was brought home after a groundout from JT Realmuto. While he was pitching well up until this point, after this run, vintage Miley returned.

Miley struck out Brad Miller to end the inning. Moving into the fourth inning, Miley struck out two more hitters. Ronald Torreyes actually ended up falling down as he struck out, his swing thrown off by Miley. Rhys Hoskins became another strikeout victim during the 5th inning, after Miley put him away on a low and inside cutter. Miley’s final inning was also his best, not allowing a single base runner. Miley began the inning with a strikeout, and ended the inning on a weak lineout form Alec Bohm and a groundball from Ronald Torreyes.

Over the course of six innings, Miley gave up six hits, one earned run, three walks and struck out six. Not a bad showing at all. 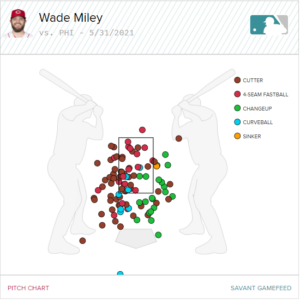 Miley pitched with fairly good command throughout the game, keeping the ball down and along the edges of the strike zone. His primary pitch today was his cutter, which landed on the lower left hand side of the plate. It was set up well by his 4-seam fastball, which he kept up in the zone. His alternate pitches, primarily his changeup and curveball, helped to complement his cutter. His curveball dotted the lower left hand side of the strike zone, similarly to his cutter, but with completely different movement. His changeup was a operated in an opposite manner, dotting the right hand side of the plate. Combined, these two set up his cutter very effectively, which was a big contributor to his success today.

Sean Doolittle relieved Miley in the 7th and protected his lead. Our old friend, Travis Jankowski, led off the inning by striking out looking. After giving up a single to Obdubal Herrera, Doolittle induced a flyout and pop out from Jean Segura and Rhys Hoskins to end the inning.

Brad Brach relieved Doolittle during the 8th inning and pitched decently well. While allowing one baserunner, in the form of a walk, Brach induced a groundout and fly out to end the inning.

Michael Feliz came in during the 9th inning. While the Phillies were unable to score against the Reds during this inning, it’s worth noting that the Phillies had consistent strong contact against him. Travis Jankowski almost hit a ball over the right field wall, and Matt Joyce lined out to the diving Jonathan India

This team is flawed, and it can be frustrating, but it also can be so much fun. Hopefully, the Redlegs can continue this movement and claim the win tomorrow. Gametime is 7:10 PM, with Sonny Gray facing off against Aaron Nola at Great American Ball Park.