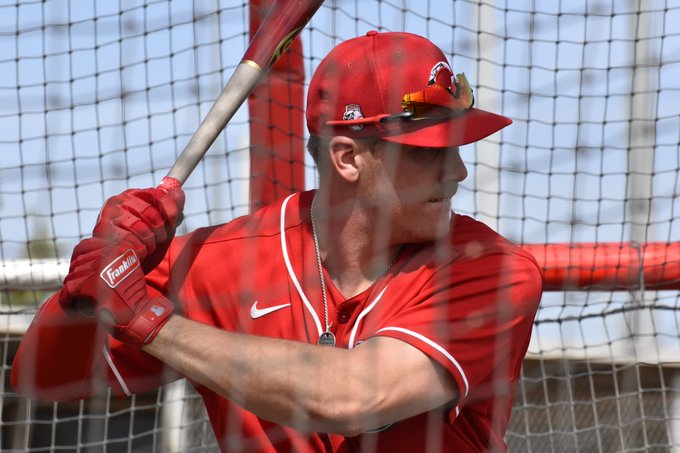 The Reds did not hit the ball particularly hard, but they had timely hits and good fortune on their side in today’s game. Seven walks by Reds batters played a key role in the outcome, as three of those walks would later come around to score.

On the pitching side, Vladimir Gutierrez recorded the best start of his young career, while the bullpen again ran into some issues late. The Reds were able to survive, winning 7-3.

The Reds got on the board early, scoring twice in the first. After an infield single by Jesse Winker, Nick Castellanos reached on an error. Tyler Stephenson drove in Winker with a double, and Joey Votto grounded out to score Castellanos.

The Reds played add-on in the second, scoring three times. Scott Heineman reached via a walk, followed by an infield single by pitcher Vladimir Gutierrez two batters later. Jonathan India added an infield single of his own, scoring Heineman as Brewers third baseman Travis Shaw was injured on the play. Two batters later, Castellanos ripped a 106.4 mph double down the left field line, clearing the bases and giving the Reds a 5-1 lead.

Eugenio Suárez drew a walk in the third inning.

Winker and Castellanos drew back-to-back walks in the fourth. Stephenson followed with another double, clearing the bases and making it 7-1.

India drew a walk in the sixth.

Votto drew a walk of his own in the seventh. After advancing on a wild pitch, Suárez singled, but Votto was unable to advance from second. Votto would later move to third on a fielder’s choice, but the Reds ended up stranding two.

Shogo Akiyama, who had just entered in a double switch, hit a double down the right field line to begin the eighth on his bobblehead night. Notably, it had just an 8% hit probability. Winker would draw a walk two batters later before the inning was ended with a double play.

Vladimir Gutierrez had the best start of his young Major League career, pitching seven innings for the first time, while allowing just two runs and setting his career-high in strikeouts.

Gutierrez ran into a bit of trouble in the first inning. After hitting the first batter of the game with a pitch, Gutierrez retired the next two. Then, he allowed a single, making it first and third. During the next plate appearance, Gutierrez balked, bringing in the game’s first run.

Gutierrez allowed two singles in the second inning, striking out two and not allowing a run. He followed with a perfect third inning, retiring all three batters on groundouts.

In the fourth inning, Gutierrez issued a walk and allowed a single, but struck out the other three he faced, getting out of the inning without damage.

Gutierrez ran into a little more trouble in the fifth, allowing a double and a walk, with a wild pitch advancing the runner from second to third. The Brewers were able to drive the run in on a sacrifice fly.

Gutierrez allowed an infield single in the sixth, though it was a play that India should have been able to handle. He was again able to get out of the inning without allowing a run.

Gutierrez pitched the seventh as well, walking one and striking out one. In total, he pitched seven innings, allowing a pair of runs on six hits, walking three. He struck out seven, one more than he had in his first two starts combined. He had a 40% whiff rate and 36% CSW (called strikes plus whiffs).

Amir Garrett came in to start the eighth. He faced four batters, walking one and allowing a single while retiring the other two.

Heath Hembree was brought in to finish the eighth, striking out the first batter he faced to end the inning. Hembree pitched the ninth as well, allowing a deep home run to Daniel Vogelbach and a double off the wall to Christian Yelich.

The Reds conclude the Brewers series with an afternoon game at Great American Ball Park. First pitch is at 12:35 p.m. EST as Luis Castillo faces off against Freddy Peralta in a rematch of the May 24 game.