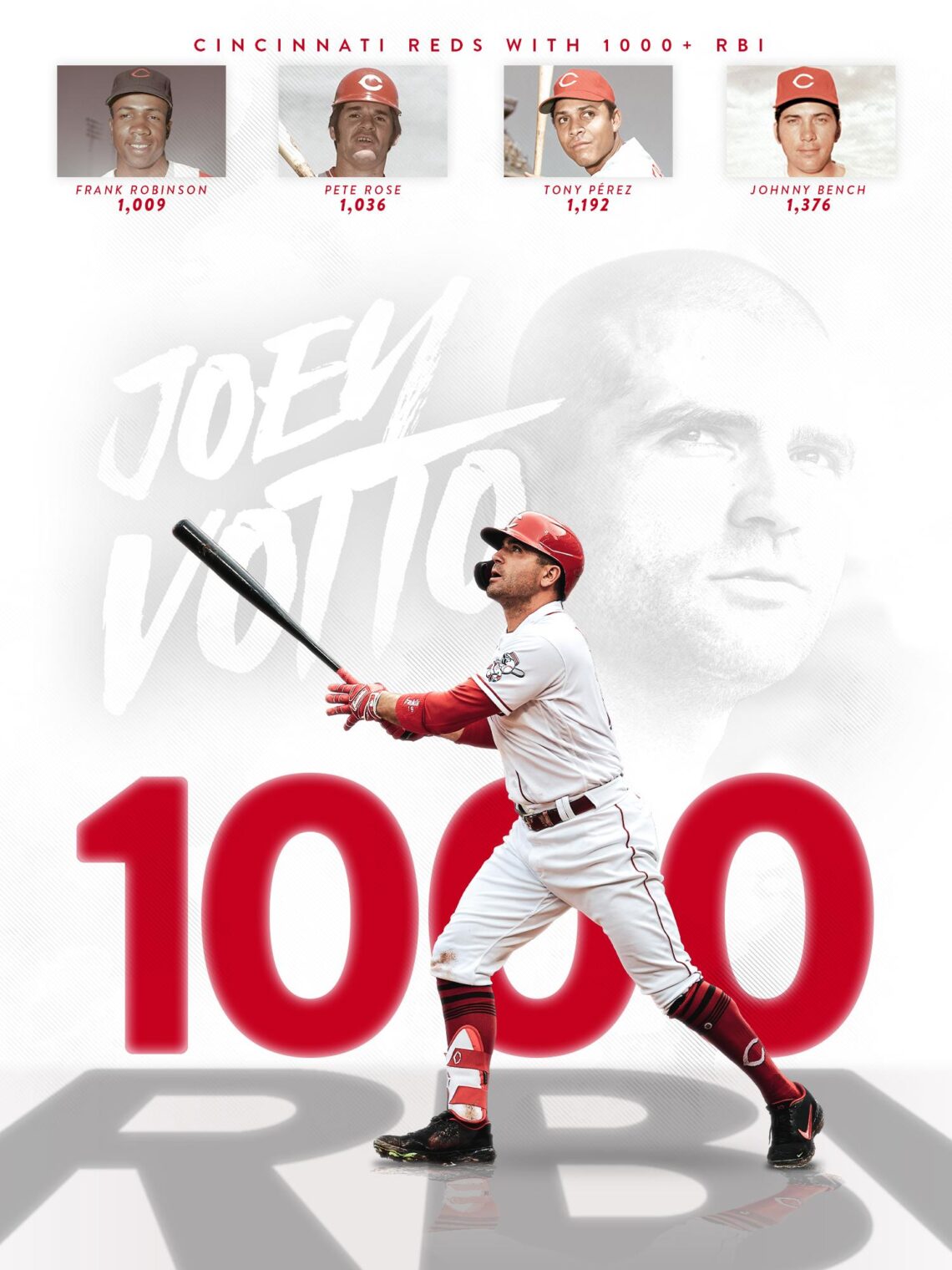 The Reds got the early lead against the Padres, but could not hold on, losing 7-5 in a rain-shortened contest. Joey Votto’s 1000th career RBI highlighted the night for the Reds, who are now 2-17 combined against the Diamondbacks, Padres, and Giants this season.

The first inning was an eventful one for the Reds. Just as his Padres counterpart had done in the top half of the inning, Jonathan India worked a leadoff walk. India caught a break, as the 3-2 pitch appeared to be in the zone, and it appeared India attempted to swing. Still, the result was the first Reds baserunner of the game. One batter later Jesse Winker blooped a single to move India to second. Nick Castellanos then put the Reds on the board, hitting a three-run home run into the first row of the right field stands. Joey Votto followed with a double off the top of the wall in center field. Alejo Lopez was retired on a groundout with a 59% hit probability, moving Votto to third. Tucker Barnhart then drew a walk, followed by a Kyle Farmer sacrifice fly to make it 4-0.

Winker drew a two-out walk in the second inning.

Votto launched a home run to lead off the third, collecting his 1000th career RBI and getting a curtain call. Votto is just the fifth Reds player to reach the 1000 RBI threshold.

There goes our hero. 🐐 pic.twitter.com/RMucFIWlhx

Castellanos was the next batter to reach, via an infield single in the fifth that could have been ruled an error. He was erased on an inning-ending double play.

Vladimir Gutierrez was not particularly sharp tonight, for the second time in his past three starts. Notably, both of his rough starts came against the Padres. Excluding the two starts against the Padres, Gutierrez he has allowed three or less runs in each of his starts.

Gutierrez had to work around a leadoff walk in the first inning, but was able to escape without damage.

Gutierrez allowed back-to-back home runs to begin the second inning before walking the third batter on four pitches. He rebounded, striking out the next batter on a pitch in the dirt. The pitcher then sacrificed the runner over to second, and Gutierrez was able to induce a groundout to end the inning.

Gutierrez again allowed a leadoff home run in the third, followed this time by a single. He retired the next two batters, though each had an exit velocity of over 100 mph and a hit probability of 51% or higher.

The fourth inning was the first time Gutierrez retired the leadoff hitter. He pitched a clean inning, retiring the side in order, striking out one.

The leadoff hitter again reached in the fifth, this time on a single. The next batter also singled, making it first and second. A wild pitch allowed both runners to advance. Gutierrez was then able to get a groundout, holding the runners at second and third, before walking Manny Machado to load the bases. David Bell then made the move to the bullpen.

Josh Osich came in to replace Gutierrez, promptly allowing a grand slam to give the Padres a 7-5 lead. Osich walked the next batter before getting a strikeout. One pitch later, Tucker Barnhart threw out Wil Myers attempting to steal to end the inning.

Cionel Pérez came in to begin the sixth, striking out the one batter he faced prior to the game going into a rain delay.

The Reds conclude the Padres series with a night game at Great American Ball Park. First pitch is at 7:10 p.m. EST as Luis Castillo faces off against rookie Ryan Weathers. Tomorrow is also the last chance to vote for Winker and Castellanos to start the All Star game, as voting closes at 2 p.m. EST.