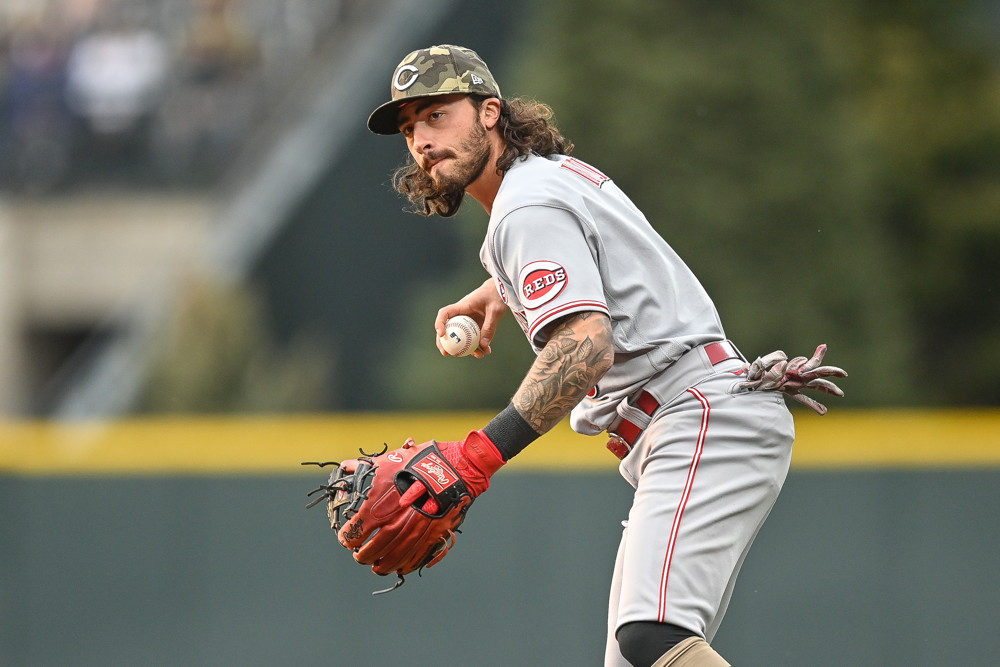 About a month ago, someone told me that Jonathan India was the favorite to win National League Rookie of the Year, which would make him the first Red to win the award since Scott Williamson in 1999. It’s obvious why people had at the time pegged him as the favorite. Jonathan India had gotten off to a sizzling start, playing a vital role in the Red’s early success.

However, as I wrote in early April, the Red Sparrow’s underlying peripherals were screaming for a negative regression. Since those first eight games of the season, Cincinnati has seen that regression take place. India has been flashy with the glove, but has struggled at the plate.

So what has contributed to the slump of the Red Sparrow, and what can fans expect from him for the remainder of the season?

Let’s start by reviewing his overall outcome stats for the year.

Yeah, that’s not quite as pretty as it was earlier this season, but that doesn’t mean there’s nothing to like here. India’s on base percentage is actually above average. While it fluctuates year to year, the average OBP for an MLB player is about .320. That’s a critical skill in today’s game. His batting average, while not great, is also higher than the MLB average of .236. The problem with Jonathan India’s hitting so far is a lack of power. Currently, India’s isolated power is .122 while the league average is .159. This lack of power is what contributed to India’s struggles after his hot start. It’s worth noting that, even though India has struggled to hit for power, he’s still been a solid contributor to the Red’s offense. For the year, India’s wRC+ is 109, putting him above average in total offensive contributions to the team.

There’s a lot more to measuring a hitter, though, than basic outcome stats. While traditional metrics like batting average can serve as a talent indicator, it paints an imperfect picture of the hitter. To get a better idea of how India has been playing, let’s dig a bit deeper into his batted ball data.

To gain a better understanding of Jonathan India, let’s look at his expected stats. Expected stats use exit velocity and launch angle to calculate what we can expect from batted balls with similar profiles to the ones the batter hits. It estimates the outcome a batted ball (or series of batted balls) should have based on the actual outcomes of previous batted balls with similar exit velocities and launch angles. In the instance of a weakly hit ground ball, player spring speed is also taken into account.

Jonathan India’s are very similar to his outcome stats, indicating that, outside of a major change to his batted balls, we’re unlikely to see a significant  change in his game.

Let’s see if we can figure out why. 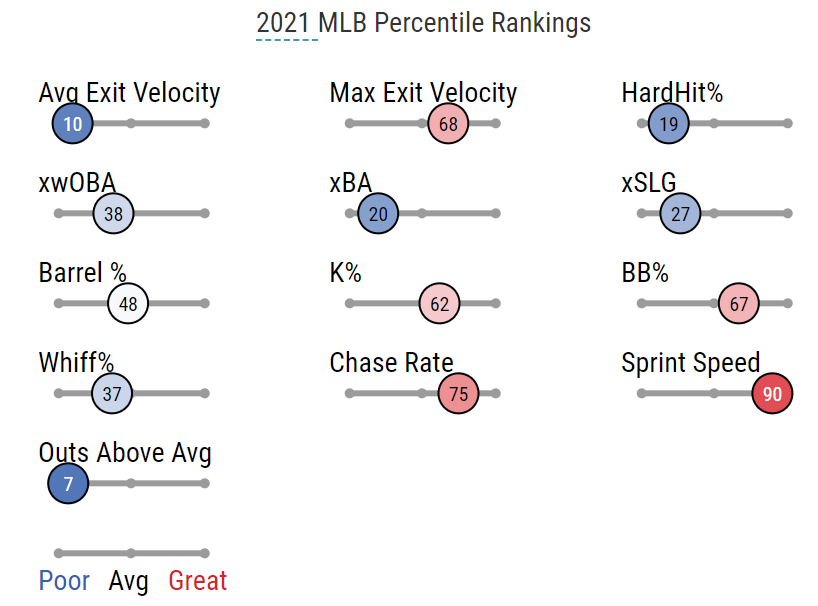 This chart explains a lot about why India’s expected metrics are so low. He’s simply not hitting the ball hard. It’s not that he’s incapable of hitting the ball hard. He’s simply not barreling the ball. India is currently ranked 473 in terms of average exit velocity, putting him behind players like Kyle Farmer (406), Billy Hamilton (450), Tucker Barnhart (336), Shogo Akiyama (277) and Eugenio Suarez (456). The next Reds player WORSE than India is Jose De Leon (502).

For the 2021 season, Jonathan India has put 102 balls in play. Of those 102, only 9 came off the barrel of the bat. When it is barreled, however, he actually hits it fairly hard. This should be encouraging for Reds fans. If he were barreling the baseball, but still not hitting it hard, it would be fair to assume that he would struggle to tap into much power. However, because the power is there, it is fair to believe that more power will come, if he begins barreling the ball more.

India has a fairly good approach at the plate. We’ve already shown his above average on base percentage, but he’s also doing a good job at not striking out. Currently, he’s in the 60th percentile for K% and the 71st for his chase rate. His low batting average and slugging percentage are simply the result of weak contact.

What Can We Expect in the Future?

As a college player, India profiled as having above average power. We saw that power in spring training. The only reason it hasn’t shown up at the big league level is because of his contact quality. Jonathan India’s barrel rate and average exit velocity have been below average, but his more recent at bats might be an indication that this is about to change.

In spite of being a below average hitter so far, there is evidence that India might be in the midst of a power breakout. For the 2021 season, Jonathan India has had 134 at bats, 102 of which created a batted ball event. We can split these hits 25 at a time, and examine how his power has progressed throughout the season, while comparing him to the average MLB hitter. 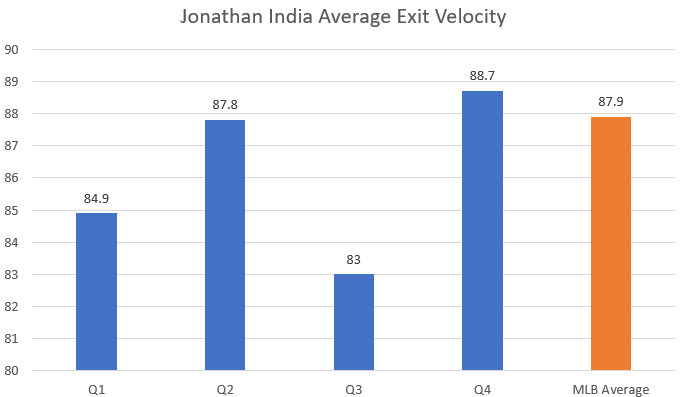 Each quarter represents (roughly) 25 batted balls. For his first 75 balls that India put in play, he hit with a below average exit velocity. However, his most recent 25 batted balls averaged out higher than the typical MLB player.

This upward trend in power is also indicated by his rolling hard hit percentage. 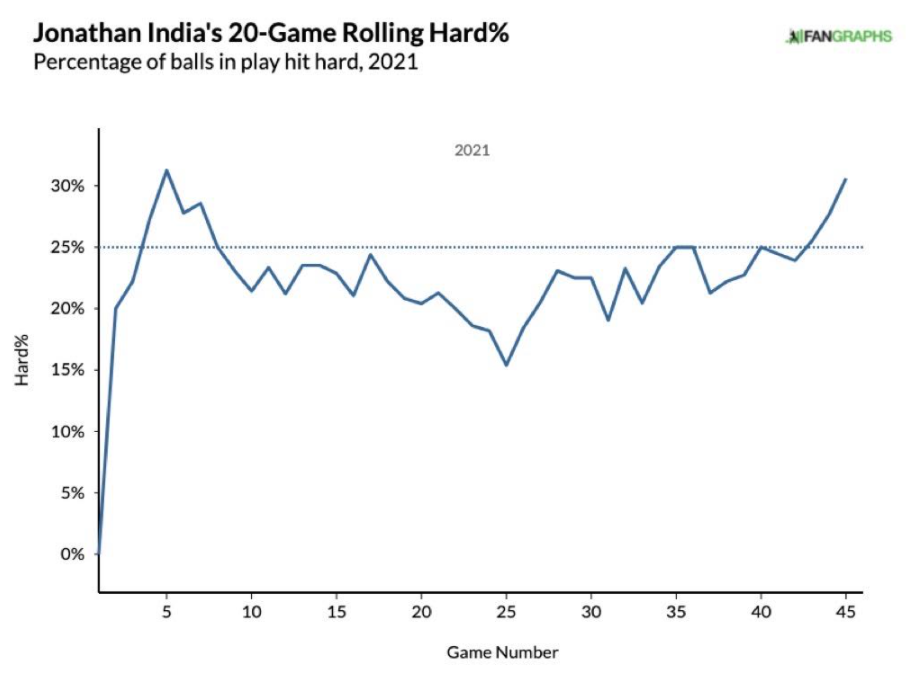 This chart is encouraging, and it aligns with how India has performed this year. He started out extremely strong before moving into a bit of a slump. Now, we are seeing him start to come out of that slump, and he’s hitting the ball hard again.

So, what sort of hitter is the Red Sparrow? Most likely, what we are witnessing right now is Jonathan India’s floor: A slightly below average hitter with great speed and on base skills. There’s value in a player like that. However, it’s possible that the real Jonathan India is still emerging. His average exit velocity is ticking upwards, and his power is starting to show. We’re not the only ones seeing these peripheral improvements to India’s game. The Reds are too, indicated by David Bell moving the Red Sparrow into the leadoff spot for today’s game against the Cardinals.

Like I said in my previous article, I’m a big believer in Jonathan India. I stand by that. I truthfully believe he has All-Star level talent and will be a major contributor to a winning Reds team. His results — so far — don’t showcase the potential that he’s beginning to tap into.