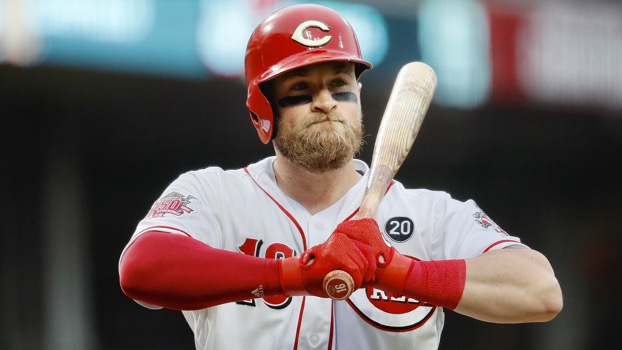 The Reds traveled to Milwaukee Thursday to begin the most important series of their season. Winning three games leading into the All-Star break could be the deciding factor that finally convinces the front office to give this team a chance.

Thursday night was not the ideal start.

In a game full of squandered chances, the bullpen was the eventual nail in the coffin in a 5-3 loss. The Reds left the bases loaded in each of the first two innings, and two of their runs scored on back-to-back passed balls. Tyler Mahle battled after a difficult first inning, and left the game tied after six innings.

At the end of the day, the Reds had nobody but themselves to blame. Missing your opportunities will come back to haunt you, especially when your bullpen is full of bargain-bin finds from ownership that is more focused on cost-savings than anything else.

Facing Adrian Houser for the third time this season, the Reds were looking to start quickly in their biggest game of the season. They missed a few huge opportunities to do just that.

As he has done for the past month, Jonathan India reached base to open the game. His 90 MPH single to right field had a .930 xBA, and he moved to second on a passed ball while Jesse Winker was at the plate. Winker would later walk, and the bases would be loaded after Nick Castellanos lined a broken bat single over second base with an .850 xBA.

Houser got a huge strikeout of Joey Votto for the first out of the game, and then followed with another strikeout of Tyler Naquin. With two outs, Eugenio Suarez had the final opportunity to drive in a run, but he popped out to first, ending a 29 pitch first inning for Houser.

Starting the second inning, Tucker Barnhart ripped a 101 MPH single to right field. After Kyle Farmer was hit by a pitch, Tyler Mahle attempted a sacrifice bunt, which Houser scooped up and fired to third, forcing out Barnhart. India reached for the second time with a walk, giving the Reds their second bases loaded opportunity in as many innings.

Similar to how he did in the first, Houser struck out the next two batters, getting Winker and Castellanos both swinging to end the inning, leaving three runners stranded once again.

Votto opened the third with a 96.2 MPH double that glanced off the glove of Garcia on the warning track in right field. He would move to second on an infield single by Naquin, who would be erased when Suarez grounded into a double play on the first pitch. With two outs and Votto at third, Barnhart flied out to centerfield, leaving the fifth runner in scoring position through three innings.

Houser’s easiest inning was the fourth, as he got a fly out from Farmer on the first pitch of the inning before striking out Mahle and India consecutively.

Winker reached on an error leading off the fifth, but was quickly erased on a fielders choice by Castellanos. With one out, Votto walked, giving Naquin his second opportunity with runners in scoring position. He walked, bringing Suarez to the plate, but also ending Houser’s outing. He threw 93 pitches, allowing five hits, four walks, and a hit batter. Jake Cousins was called on by Craig Counsell to work out of the third bases loaded jam of the day.

Suarez swung at the first pitch from Cousins, popping out nearly in the identical spot he did in the first inning. Cousins’ next two pitches glanced off the glove of Narvaez, allowing Castellanos and then Votto to score from third. With the game tied, Barnhart grounded an 87.6 MPH single through the right side to score Naquin, giving the Reds a 3-2 lead.

Trailing for the first time in the game, the Brewers sent Cousins back to the mound for the sixth. He worked a scoreless inning, striking out Mahle and India along the way. They would turn to Brent Suter with the game tied in the seventh, and he worked a perfect inning to keep the game level.

With the game tied in the eighth, Counsell turned to the first of his two elite relievers, calling on Devin Williams. Suarez led off the inning with a groundout, before Barnhart and Farmer struck out. It was the third straight perfect inning for Brewers relievers, and ten straight Reds had been retired.

Counsell’s second elite reliever took the mound in the ninth, as Josh Hader was given the save opportunity. Tyler Stephenson pinch hit to begin the inning and was struck out on four pitches. India fouled out to Hiura down the first base line, and Winker also struck out, clinching the 5-3 Brewers win.

Tyler Mahle entered Thursday with a BB% in the 51st percentile among all pitchers, and walks were a problem early.

Mahle issued a free pass to Luis Urias opening the game, then hit Christian Yelich. After a fielders choice, with one out and runners on the corners, Mahle walked Omar Narvaez. Similar to the Reds, the Brewers had a huge opportunity with the bases loaded in the first inning. They capitalized.

On a check swing that traveled just one foot, Avisail Garcia drove in the first run of the game. Mahle got to the ball, attempting to make the play with his barehand, but slightly overran it. After another walk to Jace Peterson, it was a 2-0 game. Luckily for Mahle, Keston Hiura grounded into an inning-ending 5-4-3 double play. It happened to be the only ball hit over 76 MPH in the inning, and the Brewers scored both runs without having a ball leave the infield.

Entering the second inning with 31 pitches, Mahle needed a fairly quick inning to extend his night. He did just that, allowing just a single to Luis Urias, while getting two strikeouts and a ground out. The third inning was a similar story, as he worked around a lead off walk to work a clean inning in just 13 pitches.

Mahle’s best inning was the fourth, as he struck out two and soft ground out from Jackie Bradley Jr. He only threw 13 pitches again.

Pitching with a lead for the first time, Mahle continued to work quickly in the fifth inning. On just eight pitches, he got two ground outs and a strikeout. He had retired nine straight, and managed his pitch count to just 87 after throwing 52 in the first two innings.

The first extra-base hit for the Brewers came leading off the bottom of the sixth inning, as Narvaez hit a long fly ball into the right field corner. Mahle bounced back to strikeout Garcia for the first out of the inning, before getting Peterson to roll over a 1-2 slider for a soft ground out. With the tying run at third and two outs, Mahle allowed the first hard-hit ball of the game (99.2 MPH) from Hiura. Unfortunately for Mahle, it bounced off Winker’s glove on the warning track, allowing the tying run to score.

Mahle’s day ended after the sixth, as he exited in a 3-3 game. He worked six innings, allowing three earned runs and just one hard-hit ball over 103 pitches.

Josh Osich was the first reliever called upon by David Bell. He faced just three batters, sandwiching a walk between a ground out and fly out. With two outs and Willy Adames coming to the plate, Bell turned to Art Warren. On the first pitch, Urias stole second, putting the go-ahead run in scoring position. Adames won the battle against Warren, lining a 105.1 MPH single to center field, but Urias was cut down at the plate on a perfect throw from Naquin, keeping the game tied.

Warren ultimately would only face one batter, and Brad Brach was next out of the bullpen to work the eighth inning. After allowing a lead off single to Narvaez, Brach’s 1-2 pitch to Garcia was crushed off the batter’s eye, a 107.1 MPH two-run shot to give the Brewers a 5-3 lead. After a double from Hiura, Brach was lifted for Cionel Perez, who walked Bradley Jr. before getting the final two outs of the inning.

The Reds had allowed just three hard-hit balls before the start of the eighth inning. Brach gave up two, and the two runs that won the game for the Brewers.

The Reds take on the Brewers in game two of their four-game weekend set. A pair of left-handed pitchers face off, as Wade Miley takes on Eric Lauer. First pitch is at 8:10 pm EST.