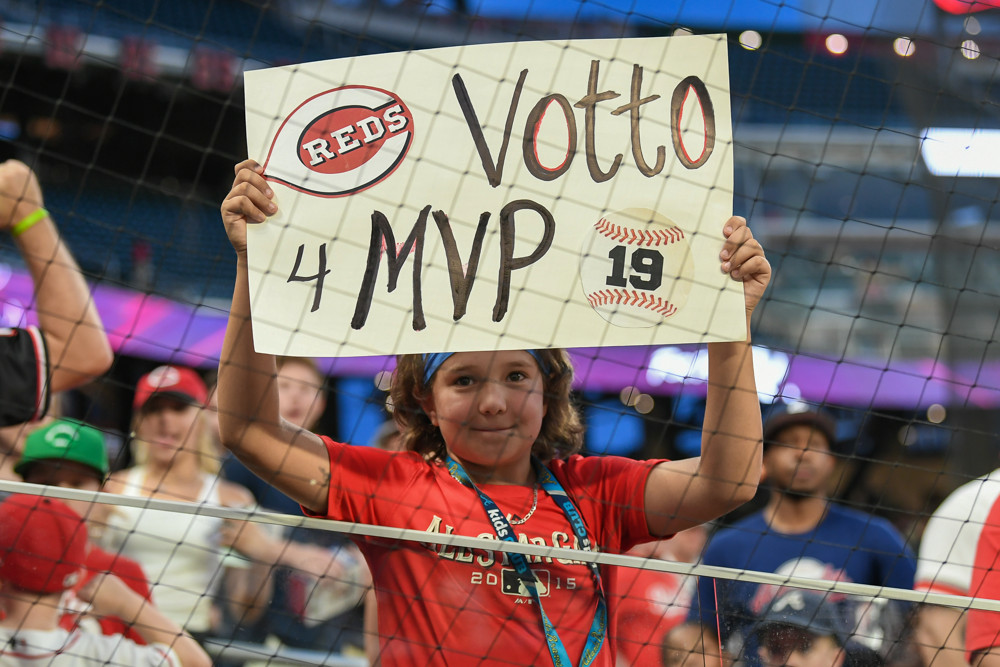 Another Reds season has come and gone without a postseason appearance.

Despite the disappointing ending, though, the team gave us a summer of (mostly) fun, exciting baseball. Joey Votto turned back the clock and had a season that could see him earn down-the-ballot MVP votes. Nick Castellanos and Jesse Winker were all-stars. Jonathan India will soon be the National League Rookie of the Year, the Reds’ first winner since Scott Williamson in 1999.

And our good friend Statcast was there to track it all along the way. From the hardest-hit ball to the fastest pitch smacked over the fence, it’s time to look back on the Statcast superlatives from the 2021 season.

Could it be anyone else?

After extending his home run streak — which would eventually reach seven game — to four games in the first inning on July 27, Votto wasn’t done with the Cubs. He unleashed on this cutter from Adbert Alzolay in the third inning, sending it 410 feet into the bleachers at Wrigley Field. It was Votto’s hardest-hit ball in the Statcast era (since 2015).

Before Jonathan India became the probable NL Rookie of the Year, he was just trying to find his footing at the big-league level. Although he had a strong first week in the majors, this will certainly not show up on the highlight reel. India got jammed by a 93 mph fastball from Carlos Martinez, exploding his bat as the ball rolled weakly back to the mound.

Behind a more upright stance, Joey Votto hit 36 home runs in 2021, his most since what should’ve been his second MVP season in 2017. His .297 isolated power (slugging percentage minus batting average) was the highest of his career. Votto was clearly focused on getting the ball in the air more, in addition to hitting the ball with more authority. His groundball rate was a career low 31.7%, and he averaged an MLB-leading 208 feet per batted ball.

The longest of Votto’s batted balls came in one of the final games of the season and nearly left Great American Ball Park. Aristides Aquino (469 feet) is the only Reds batter to slug a longer home run than this in the Statcast era.

Eugenio Suárez had a season to forget, but he still hit 31 home runs. The first came on Opening Day and barely squeaked over the fence in right field.

Hey, if it gets over the wall, it counts just the same as a ball that goes into the Ohio River.

Over 1,800 pitches were thrown at 100 mph or more during the 2021 regular season. Despite triple-digit velocity becoming more common, it’s not any easier to hit. The league batted .206 and slugged .320 on pitches over 100 mph this season.

Only six players managed to get a hit on a pitch faster than the one Tyler Naquin did here against Cardinals reliever Jordan Hicks.

Fastest Pitch for a Home Run

The fastest pitch hit out of the park was swatted by Suárez, also against the Cardinals. Ryan Helsley left a fastball right down the middle, and Suárez didn’t miss it. This homer broke a 2-2 tie as the Reds went on to sweep the four-game series on the road in St. Louis, sparking a strong run over the next three months. From this series through the end of August, the Reds went 47-33.

Highest Pitch for a Hit

I have to admit Votto is not the player I expected to see here. This felt like it had “Nick Castellanos” written all over it. While Votto did get a tad more aggressive at the plate in 2021, he was still a pillar of plate discipline, ranking in the 87th percentile in chase rate and the 97th in walk rate.

Early in the season, Votto chased a pitch nearly four feet off the ground from the Diamondbacks Taylor Widener and smashed it for a 103.4-mph, line-drive single.

Highest Pitch for a Home Run

This is the type of player I expected to see here: a free-swinger. Kyle Farmer ranked in the sixth percentile in chase rate and the second percentile in walk rate. But if he does one thing well at the plate, it’s hitting against left-handed pitchers.

Farmer turned on this pitch up at the letters and sent it 402 feet into the Cincinnati evening as the Reds beat down the Rockies 11-5.

Lowest Pitch for a Hit

Now we’re back to another fairly patient and disciplined hitter. Winker ranked in the 71st percentile in chase rate and 76th in walk rate. He was fooled by this splitter down and in from Marcus Stroman, but he fought it off and snuck it down the first-base line for a hit. As the icing on the cake, he hustled into second base for a double.

Side note: There was a lot of talk in spring training about Jesse Winker getting “faster.” However, the data did not bear this out. His average sprint speed fell from 26.4 feet per second in 2020 to 25.8 ft/s in 2021; his average time from home to first base increased from 4.59 to 4.67 seconds.

Lowest Pitch for a Home Run

Just another day at the ballyard for Naquin, who golfed this pitch way out of Great American Ball Park (426 feet). We also get another cameo appearance from Cubs pitcher Adbert Alzolay, who gave up five of his 25 home runs on the season to the Reds.

Scott Heineman had three hits in his time with the Reds. Two were home runs; the other was this extremely fortunate single that fell between three converging players. Shortly after he was designated for assignment by the Reds, he signed with the Yomiuri Giants in Japan.

This category felt tailor-made for Shogo Akiyama, but Suárez beat out his teammate by a mere one degree of launch angle.

Suárez hit the ball nearly straight down, as it bounced less than a foot in front of the plate and he picked up an infield single.

Side note: Just like Winker, there was also a “he got faster” narrative around Suárez in spring training. This one actually proved true. Suárez increased his average sprint speed from 25.9 to 26.7 feet per second and his average home-to-first time decreased by .06 seconds.

First Scott Heineman and now a pitcher showing up in the hitter edition of this series — what is happening?

Wade Miley did what he could to help his own cause here but was robbed on an incredible catch by Dominic Smith, a converted first baseman who ranked last among all MLB left fielders with -9 outs above average. Go figure.

Those two runs taken off the board were costly to the Reds. The bullpen blew a 4-3 lead in the ninth inning and the Reds went on to lose the game in extra innings.

We have a tie! We’ll start with rookie T.J. Friedl, who was called up from Triple-A in September and made a strong first impression (106 wRC+ in 36 plate appearances).

Friedl picked up a single on this seemingly routine fly ball (48-degree launch angle) as he benefitted from some horrific defense and perhaps the wind.

Employee No. 19 kicked off the Statcast superlatives, so he might as well take us home.

Because this ball was hit so high (46-degree launch angle) and not very hard (84.9 mph), Statcast gave it a 1.7% chance of becoming a hit based on past similarly batted balls. However, expected batting average doesn’t take defensive positioning (refer to catch probability for that one). Pirates left fielder Ben Gamel was playing well off the line and had to come a long way to make a sliding catch attempt. Gamel nearly came up with it, but it fell in for a hit.