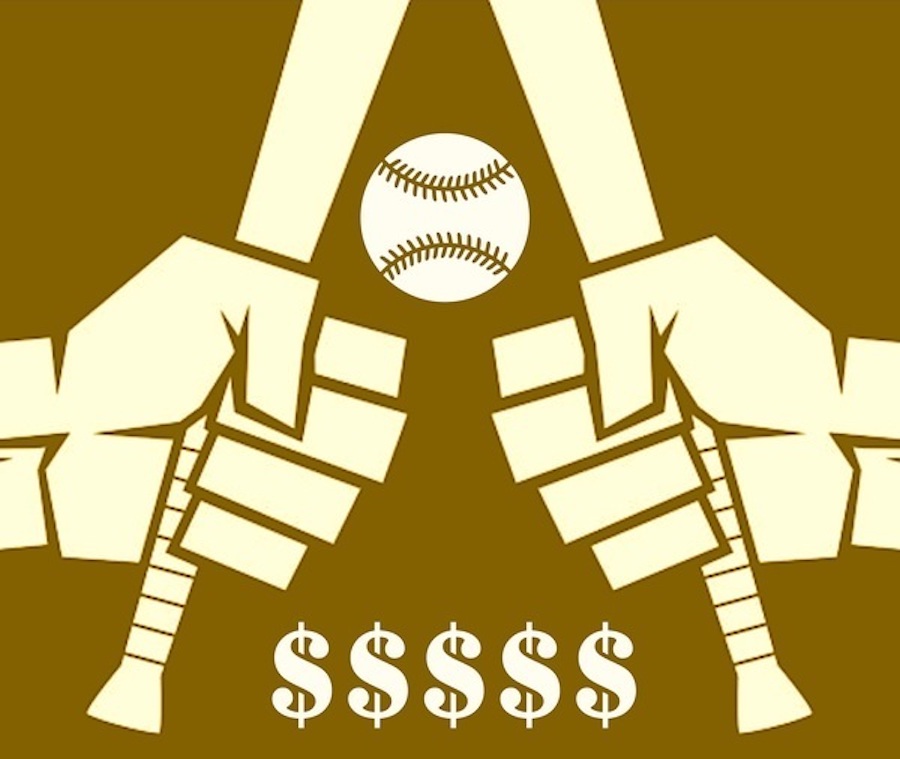 It’s been a couple months since we looked at the negotiations between baseball owners (MLB) and the players’ union (MLBPA). The 2017-2021 Collective Bargaining Agreement expired on December 1 and after nearly 10,000 days of labor peace, owners implemented a lockout the following day. Let’s catch up on the important developments from earlier this week.

[Thanks to Mike Maffie who provided valuable help with this post. He’s a friend, long-time Reds fan and Assistant Professor of Labor and Employment Relations at Penn State. That’s right, Mike has a Ph.D. in this stuff.]

Despite the assertion by baseball’s owners that the work stoppage would jumpstart negotiations, no progress occurred during the four weeks prior to Monday. Instead of applying pressure on the players, the lockout operated like an owners’ self-goal. Just as clubs were gearing up to sell season tickets and generate interest in spring training, owners cast a long shadow over the 2022 season.

On Monday and Tuesday, the two sides met for the first in-person meetings since the lockout began. Representatives of owners and players met in a Manhattan conference room and exchanged proposals on core economic issues.

Baseball’s clocking is ticking. First, there’s the matter of unfinished offseason business. Teams must fill out rosters with arbitration, trades and free agent acquisitions. Then there’s launching spring training and getting the team in playing shape. How long will that take? The stop-start 2020 provides a recent guide for abbreviated preparation. Three weeks proved to be the bare minimum.

Important deadlines hang over real baseball games like the Sword of Damocles. Pitchers and catchers are scheduled to report in mid-February. Spring training games are to start on Feb. 26, with Opening Day on Thursday, March 31. Assuming a five-week run-up, a labor agreement by February 1 would allow a full spring training. A deal by March 1 would protect Opening Day. Later than that, you start postponing or losing regular season games.

Summary: Major League players are seeking significant changes while the owners are largely content with the status quo.

Players are concerned with the salary structure that has grown unfavorable to them over the past couple decades. Average player salaries have declined when revenues and team values have skyrocketed. While superstar players continue to negotiate eye-popping contracts, most veterans have faced a barren free agent market. Instead, teams have played younger, far less expensive options.

In 2019, 54% of playing time went to players with less than three years of service time, but only 10% of pay did (Sawchik). Exciting young baseball players like Jonathan India are grossly underpaid.

There was a time when Major League players could finish six years of team-controlled service and count on lucrative multi-year free agency deals. Today, organizations understand that players should be paid for what they are projected to produce in the future.

The sport’s superstars get huge, long-term contracts. But many “middle-class” veteran free agents have found themselves facing depressed or non-existent markets for their services. The average salary (~$4 million) is inflated by a few gigantic contracts. The median player salary is less than half the average. The union represents every major league player, including the bulk of its membership that earns minimum salary.

A related issue is competitiveness – when owners don’t try to field winning teams. Players want to find solutions that would disincentivize so many teams from tanking. They may frame anti-tanking concern as for the integrity of the sport, but their economic interest is at stake as well. If half the teams aren’t spending enough on payroll to compete, that means lower salaries for a big chunk of players.

Meanwhile, the owners, beyond holding on to what they already have, owners want to expand the uber-lucrative postseason from 10 to 14 teams.

Under the previous CBA, players remained under team (reserve) control for six years of Major League service time. For the first three of those six seasons, teams could pay players whatever they want, subject to league minimums established in the CBA. For years four through six, players earned the right to have their salary arbitrated. In the current negotiations, the MLBPA had proposed cutbacks in the number of years of reserve control and the length of service time needed to reach arbitration. The first of those was declared a red line by owners, who view that six-year remnant of the almighty reserve clause as bedrock.

On Monday, the players dropped their request for shortening team control while keeping in place their ask for shortening the wait for arbitration from three years to two. MLB responded on Tuesday by dropping its proposal to end Super Two status.

The players proposed a merit-based Bonus Pool of money from the league’s central revenue to be paid to pre-arbitration players. Calculations of WAR (Wins Above Replacement) and league awards could play a role in determining merit. Owners accepted the idea of the Bonus Pool, but the two sides remain far apart on how much money would go into it. The players are at $105 million while the owners are at $10 million.

An anti-tanking agenda not only makes sense for the players financially but is also a way to break through the “billionaires vs. millionaires” narrative to generate fan support. The players can talk about preserving the competitive integrity of the game and the importance for fans of every team to feel they have a chance.

There are several, interconnected proposals being discussed. Players have proposed a salary floor, where teams would be required to spend a certain amount on payroll. That would be the most direct and effective way to address tanking.

Players had proposed a cut in the revenue shared by big-market clubs with small-market clubs. The idea behind it being that generous revenue sharing gives recipient teams less incentive to win, knowing they will gain revenues either way. Backing up that theory is data showing player salaries began to drop in 2003 when MLB moved from a 20% sharing system to 34%. In the new CBA talks, players had proposed a $100 million cut in revenue sharing, but on Monday trimmed that to $30 million.

Both sides have agreed to a lottery system for the highest draft picks so the team with the worst record doesn’t automatically get the first selection. The NBA places all fourteen teams that didn’t make the postseason into a lottery for the top picks. Baseball owners had proposed a lottery for the bottom three teams. The players want a larger version, one that includes the bottom eight teams.

Salary Cap. The Competitive Balance Tax (“luxury tax”) operates at the other end of the payroll scale as a salary floor. It sets a soft cap on how much teams can spend on payroll. Team that go over pay a penalty (tax). The more often a team goes over, the higher the tax rate. Only the LA Dodgers exceeded the cap in 2021. The players want a higher cap so that organizations can pay more for players. They’ve proposed a level of $245 million while the teams are at $220 million.

Universal DH Both sides want it. No longer a point of contention.

It Won’t Be Easy

A deal that satisfies both sides won’t be easy.

Owners have benefited from the current salary structure and enriched themselves with leaps in franchise values. They will have to part with a higher share of the sport’s growing revenues.

You could characterize the remaining issues on the table as financial not emotional. But it’s important to remember who baseball owners are. They are billionaires, largely used to getting their way. A few of them are extreme anti-labor ideologues. Many are insulated by great wealth from financial fallout of a prolonged baseball labor dispute.

If the process gets completely derailed, it will likely be the idiosyncratic, eccentric owners who are responsible. Commissioner Rob Manfred is their employee but also their wrangler. He’s a labor lawyer by trade, a dealmaker. He’ll have to convince his clients he’s been as ruthless as possible to bring along the most hardline element.

The players side calls for great self-reflection. They have an ambitious agenda, but it will only come to pass if they make hard choices in their own ranks. Long-term contracts that are rewards for past seasons are anachronisms. So is the MLBPA caring mostly about superstar players by enabling mega-contracts. Analytics and financial imperatives have seen to that.

Players will be paid largely on what they can produce in the future. Nine-figure contracts won’t set the pay scale for middle-class players. Moving compensation from tenure to talent won’t be easy. Influential veterans must commit to fighting for younger players. The MLBPA has to focus on getting more money in the hands of younger players – a growing segment of the union’s membership.

Sure, the talks have been slow. But labor negotiations do tend to creep along at first, especially when major issues are on the table. Seeing agreement on individual issues isn’t important now because the sides are still building the framework that is inching into view.

Now that the MLBPA has dropped the players’ request to cut service time from six years to five, none of the remaining issues appear to be ideological red lines. The player goals, while aggressive, are stated in broad terms – boost average salary and incentivize competitiveness. There are many ways to accomplish them, and the players have avoided dictating specifics.

In several areas – Minimum Salaries, Bonus Pool, Lottery, Salary Cap – the parties are already dealing in common ground. The issue is compromising on dollar amounts. Negotiations over money aren’t easy, but they are straightforward.

One big compromise is left. The owners want an expanded postseason and need the players’ consent. That’s the MLBPA’s biggest bargaining chip. Expect the MLBPA to hold it close to the vest. Toward the end, they’ll exact a major concession from owners – a salary floor or starting arbitration at two years of service time would be possible final-stage exchanges.

In the end, to get a deal both sides will need to feel they exhausted options. That means a negotiation rollercoaster the next few weeks, highlighted by strategic leaks to breathless baseball reporters that generate scary headlines. Unfortunately, the bumpy ride will try the patience and goodwill of fans who deserve better.