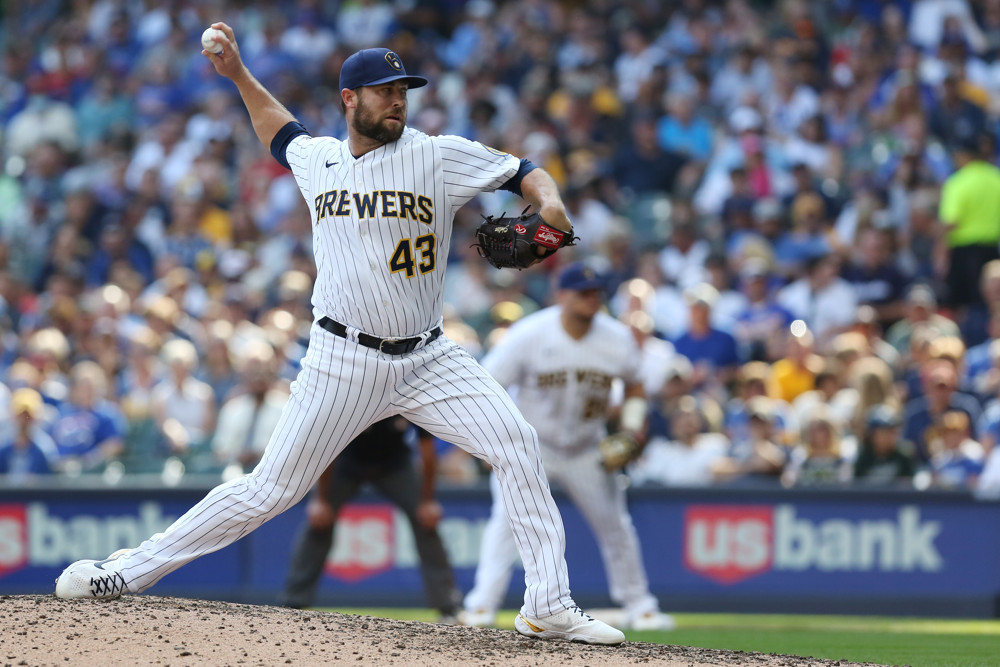 The Reds haven’t done much during the offseason to address the bullpen, which was one of the league’s worst last season and lost Michael Lorenzen, Mychal Givens, and Amir Garrett. The only MLB signing the team made to address the relief corps was veteran reliever Hunter Strickland, who agreed to a one-year, $1.875 million MLB deal with an additional $750K in performance bonuses.

What does Strickland bring to the team and how will he fit into the 2022 plans? Let’s dive in.

Strickland, 33, has pitched eight years in the major leagues for seven teams. He’s not exactly a career journeyman, however. Strickland pitched for the Giants in the first five years of his career. You may remember him best for intentionally throwing at Bryce Harper in 2017, sparking a benches-clearing brawl. The incident was sparked because Strickland got his feelings hurt three years earlier, when Harper hit two home runs against the reliever in the 2014 NLDS.

Strickland was originally an 18th round pick by the Red Sox in 2007. He pitched with the organization for two years, mostly as a starter, before he was sent to the Pirates for Adam LaRoche. The Pirates added him to their 40-man roster in December 2012 to protect him from the Rule 5 draft, only to designate him for assignment a few months later. Strickland was claimed by the Giants on waivers but tore his UCL shortly thereafter and underwent Tommy John surgery.

When Strickland began throwing again less than a year later, he was hitting triple digits on the radar gun. He made his major-league debut late in the 2014 season, impressing enough in seven appearances to make the Giants’ playoff roster. The ill-fated series against Harper followed, although the Giants still went on to win the World Series.

Strickland performed even worse in 2018. Named the Giants’ closer to start the year, he performed similarly to 2017 for the first three months of the season. But after blowing a save in June, he punched a dugout wall with his pitching hand, fracturing it. Following his return in August, Strickland was a shell of himself, walking as many hitters as he struck out as he gave up 10 runs in 13.1 innings. He finished the season with a 3.97 ERA, 4.42 FIP, and 4.99 xFIP. The Giants non-tendered Strickland after the season, making him a free agent for the first time in his career.

He signed with the Mariners before the 2019 season but pitched in only four games with the team as he dealt with a lat strain and was traded to the eventual World Series champion Nationals in July. Strickland didn’t pitch well with the Nationals, however, ending the season with a 5.55 ERA, 6.30 FIP, and 6.03 xFIP while getting left off the NLCS and World Series rosters. The Nationals released him in March 2020. He signed with the Mets prior to the start of the shortened season but pitched in only four games.

Strickland joined the Rays at the start of the 2021 season and had a decent 13-game run with the club (1.69 ERA, 3.11 FIP, 4.28 xFIP). The Rays took advantage, trading him to the Angels for cash. Strickland’s stint in Anaheim was brief and disastrous, lasting just nine games. He was designated for assignment after allowing seven runs and three home runs in 6.1 innings.

Let’s get this out of the way: Strickland’s true talent isn’t a sub-2.00 ERA pitcher or even a sub-3.00 ERA pitcher — at least not anymore. He benefited from a .198 batting average on balls in play, 91% strand rate, and 8.5% home run to flyball ratio during his time in Milwaukee, all of which are likely to regress in 2022. There were still some encouraging signs in his time with the Brewers, however.

Most notably, Strickland struck out batters at a clip he hadn’t since his rookie season (26.8%) and brought down his walk rate from terrible to a roughly league average number (8.5%). He also excelled at limiting hard contact, ranking in the 84th percentile in average exit velocity (86.9 mph) and 97th in hard-hit rate (29.4%).

Strickland’s days of hitting 100 mph are likely over, but his four-seam fastball still averaged 95 mph (75th percentile) last year and topped out at 98. His four-seamer gets above-average spin (74th percentile) but poor spin efficiency, which means it gets less rise than the average four-seamer by about two inches. Still, he likes to throw it up in the zone and it had an above-average 23% whiff rate in 2021. Here he is blowing a 97-mph fastball past Cardinals outfielder Tyler O’Neill last year:

Strickland throws his fastball about half the time.

The other half, Strickland mostly throws a slider. It’s his swing-and-miss pitch, registering a 38% whiff rate last year. The breaking pitch averaged 83.9 mph last year, and it got two inches of drop and four inches of vertical movement above average.

Here’s a look at his breaking pitch getting a whiff against Dodgers shortstop Trea Turner (note how the pitch starts out looking like a high fastball):

Strickland will throw an occasional sinker and changeup. Last year, he used them only 8% of the time combined, reserving them mostly for left-handed hitters.

Speaking of lefties, Strickland has rather large platoon splits. Here are his career splits, along with last year’s numbers:

Although not horrendous against left-handed hitters, Strickland’s career numbers are worse across the board against them. The gap in strikeout rate really stands out, as it’s nearly two times higher against right-handed batters than lefties. Last year, 119 right-handed relievers faced at least 80 left-handed hitters; only one had a worse strikeout rate than Strickland.

While his slider is decent against lefties (career .249 wOBA, .284 xwOBA, 83.0 mph avg. EV, 34.8% whiff rate), his fastball has gotten destroyed as his velocity has dipped. Over the last four seasons, Strickland has allowed a .373 wOBA, .384 xwOBA, and 90.5 mph average exit velocity to lefties with the heater. His fastball whiff rate is just 10.0% against lefties in that time, compared to 26.8% against righties. You get the picture. Since Strickland seldom throws a changeup or sinker, he’s essentially down to one decent pitch against lefties, which isn’t a recipe for success.

Strickland has a career 39.8% ground-ball rate, which puts him firmly in the camp of fly-ball pitcher. That didn’t hurt him much in his San Francisco days, as Oracle Park is the least homer-friendly ballpark in baseball. He was also a better pitcher at that point in his career. In 226 innings with the Giants, he gave up 17 home runs (0.68 per nine innings). In his 86 innings since leaving the Bay, he’s given up 14, or 1.46 per nine innings — more than double his previous rate.

At least on paper, the Reds bullpen again doesn’t figure to be the team’s strong suit. Although manager David Bell has said Tony Santillan is the favorite to take over the Tejay Antone role — high-leverage situations later in games — Strickland will get his fair share of important innings, too, according to the Enquirer’s Charlie Goldsmith. That will especially be the case to start the 2022 season, as Lucas Sims will begin the year on the injured list. As with any reliever, Strickland could certainly pitch himself into — or out of — more high-leverage spots as the season goes on.

While Strickland had a nice season for the Brewers in 2021, don’t get caught up in the sub-2.00 ERA. For one, relievers are notoriously inconsistent from year to year. The underlying metrics also don’t support him continuing to maintain that kind of ERA. Plus, Strickland is 33 and his fastball doesn’t average 98 mph anymore. Strickland can certainly be a serviceable reliever for the Reds — against right-handed hitters, at least — if he can keep his strikeout rate at its 2021 level, avoid a further velocity dip (he was sitting at 95.4 mph in the one spring game the Reds have played in a stadium with Statcast), and prevent the control/command problems that have plagued him at times since his final San Francisco years.