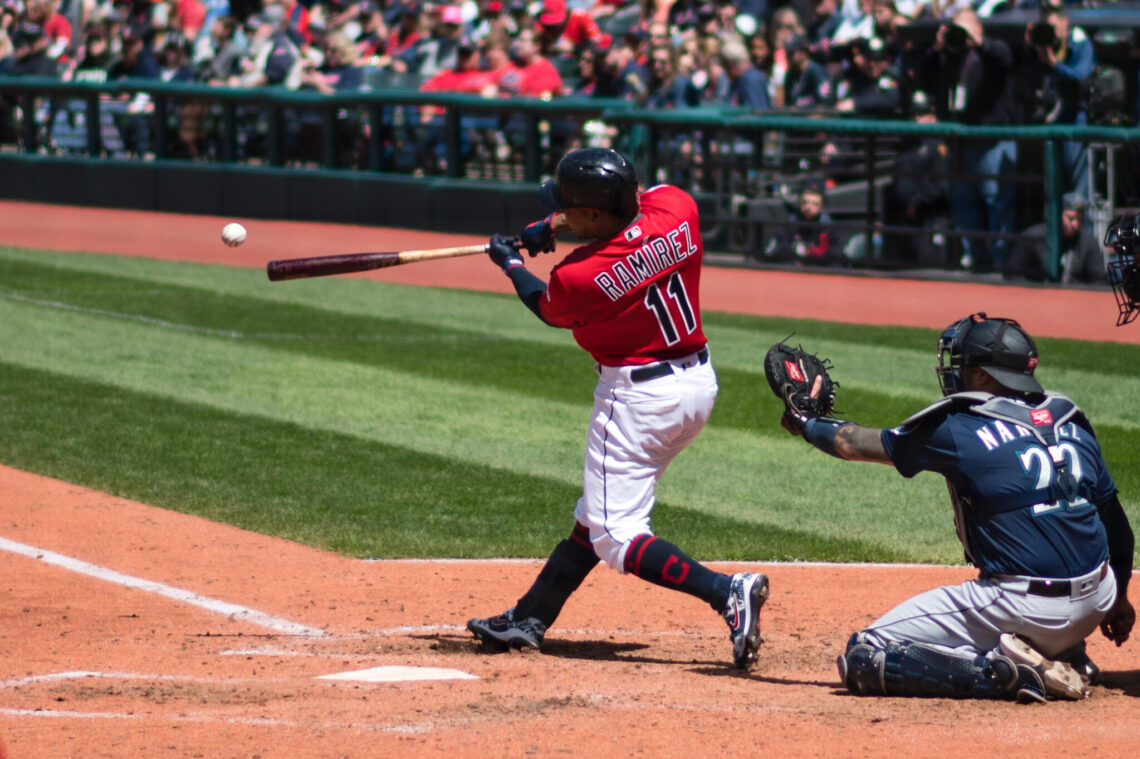 Similar to the Reds, the Cleveland Guardians spent most of their offseason aligning payroll to their resources.

After averaging 95 wins per season from 2016-2020 (94-win pace in the shortened 2020 season), the franchise slumped to an 80-82 record in 2021, a year when they also traded superstar shortstop Francisco Lindor. They entered the 2022 season with just over $56 million in payroll commitments, only more than the Orioles and Athletics.

For the early portion of the 2021 season, Cleveland was battling atop the AL Central with the White Sox. Behind strong pitching and an early MVP candidate in José Ramírez, they were seven games over .500 in mid-May, but spent their last day in first place on May 6. Despite finishing the month at 29-24, Cleveland wouldn’t reach the same heights again. Over the final five months of the season, they went just 51-58, ending the year two games under .500.

Shane Bieber, coming off his 2020 Cy Young campaign, was an All-Star, but suffered a strained shoulder and made just two starts after the All-Star break. Cal Quantrill, who was acquired in the Mike Clevinger trade in 2020, emerged as a solid rotation piece; finishing in the 53rd percentile in both xERA (4.06) and xwOBA (.310). In the bullpen, Emmanuel Clase became a force and Statcast darling, posting the following stats:

Offensively, they were largely inept outside of Ramírez and Franmil Reyes. Ramírez posted an stellar .266/.355/.538 slash line, hitting 36 homers and stealing 27 bases to post a 6.7 WAR and sixth-place MVP finish. Reyes hit 30 homers and finished in the 94th percentile with a 16.9% barrel rate. Myles Straw, who was acquired from Houston in July, finished with a 104 OPS+ and 13 stolen bases in 60 games.

As mentioned earlier, much of the Guardians’ offseason was spent aligning payroll to resources, so things were pretty quiet.

Longtime backstop Roberto Perez was allowed to walk in free agency. He later would sign with Pittsburgh. They signed catcher Sandy Leon in November, then released him at the end of spring training. Luke Maile was signed to take that backup catcher role, agreeing to a one-year, $900K deal. Bryan Shaw was retained to fill a bullpen spot after appearing in an MLB-high 81 games in 2021.

After virtually no roster movement, the Guardians did make an internal splash on the final day of the offseason, signing Ramírez to a five-year, $124 million extension with a full no-trade clause. This came after reports of the Guardians and Padres discussing a trade for Ramírez, which never came to fruition.

Here is the Guardians’ lineup from Saturday vs. Kansas City with their 2022 FanGraphs ZiPS projections: 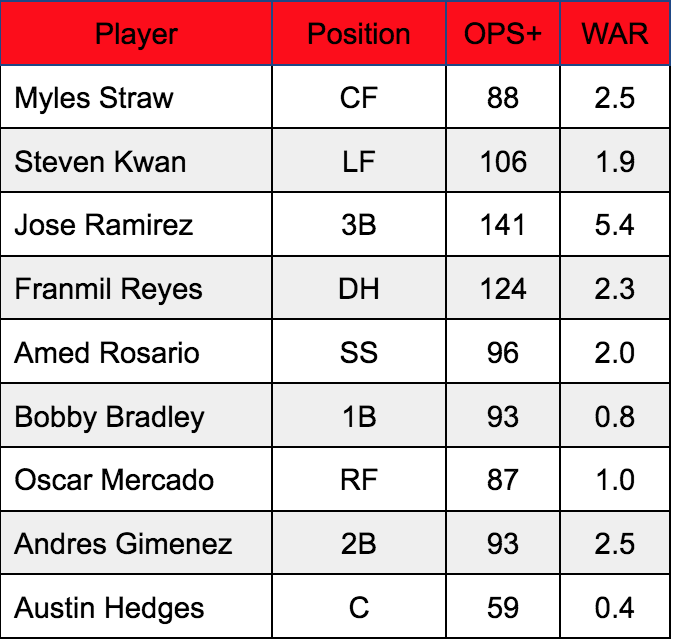 While this lineup is not scary, it did put up 17 runs against the Royals on Sunday. Ramírez will continue to be an MVP candidate, and you can pencil in Reyes to hit 30 homers nearly every year now. Gimenez and Rosario make up a mostly light-hitting middle infield, while Bobby Bradley has some pop (16.8% barrel rate in 2021) but struggles to make contact (35.5% strikeout rate).

The wild-card on the roster is Steven Kwan. The rookie went 5-for-5 on Sunday, pushing his average to a whopping .800 through three games. While that number is obviously not sustainable, he hit .328/.407/.527 across two levels last year, and has walked more than he struck out in each of his three minor league seasons. 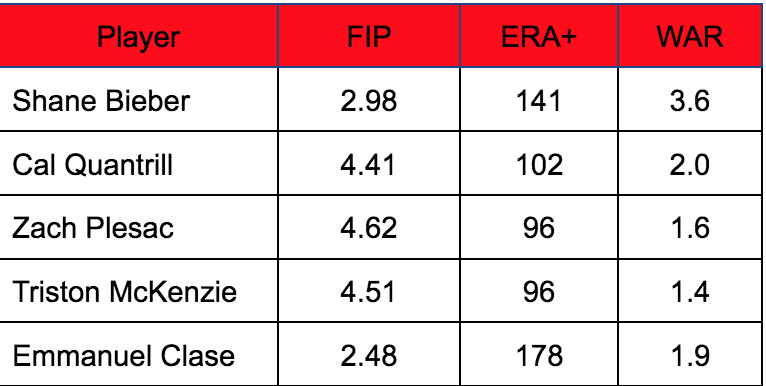 Much of the Guardians’ success will rely on the back of Bieber. If he can continue to pitch at the level he has the past three seasons (388.1 IP, 3.00 FIP, 156 ERA+), they will stay competitive.

Quantrill, Plesac and McKenzie are all promising young arms that Terry Francona’s staff will look toward to take another step. Clase will be relied upon in high-leverage roles, especially after the early season injury to James Karinchak.

As most of the AL Central made strides to improve this offseason, the Guardians stood their ground with a roster that finished last year two games under .500. Detroit and Kansas City both made substantial enough improvements to draw even with Cleveland in the standings, while the White Sox and Twins additions pulled them further away from the pack.

FanGraphs projections has Cleveland’s final record at 77-85 with a -32 run differential. It wouldn’t be surprising to see them hover around .500, but also sell some pieces at the deadline if they are out of it. Their one way to competing for a wild card spot would be Bieber and Ramírez winning the Cy Young and MVP respectively, and Kwan making a push for AL Rookie of the Year.

The most notable piece of the offseason was the franchise dropping the name they had since 1915. The Guardians nickname comes from the “Guardians of Traffic,” which faces traffic coming toward Progressive Field on the Hope Memorial Bridge in downtown Cleveland. The Guardians on the bridge are “meant to symbolize progress.”

The Guardians will visit the Reds on Tuesday for the home opener — the first of this year’s Ohio Cup showdown. Shane Bieber will start game one on Tuesday, while Triston McKenzie is slated to start game two.

[…] other news, the fine folks at RC+ took a closer look at the team rolling into GABP to help the Reds lift the lid on their home games this y…. That will include OF Steven Kwan, who enters play today having gone 9 for 13 with 5 BB, a HBP, and […]