We’re about at the quarter mark of the 2022 season so let’s take a quick, early look at how the Reds starting pitchers have performed so far. Here’s your caveat: The sample sizes here are small, even for the pitchers with the most starts. The stats indicate how they’ve pitched but don’t have much predictive power yet. 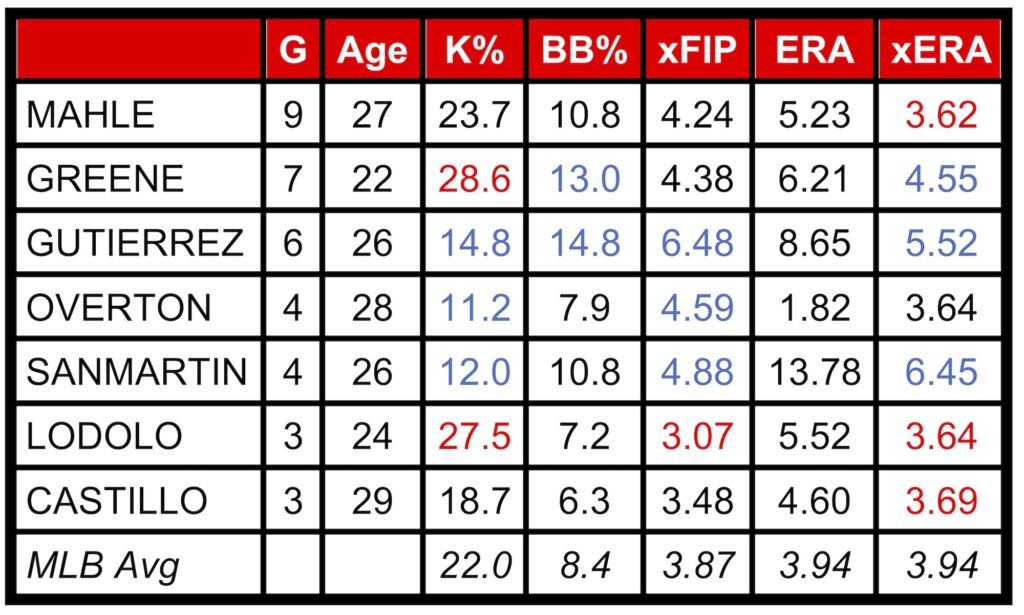 It lays out a variety of stats for Reds starters in 2022 not counting a couple times Bell used a reliever in the first.

Let’s discuss the stats in the chart for a minute.

xFIP and xERA differ based on the assumption each adopts for how much control the pitcher has over quality of contact. Given how tightly grouped across pitchers BABIP (batting average on balls in play) and HR/FB (home runs per fly ball) tend to be over large enough samples, it’s clear pitchers don’t have significant control over contact quality. How much?

xFIP assumes the pitcher has some control over the ground ball/fly ball percentages he surrenders. It estimates home runs based on how many fly balls the pitcher gives up. xERA falls at the other extreme, using the assumption the pitcher is responsible for all of the contact quality.

You don’t have to choose between xFIP and xERA. Just understand how they evaluate pitchers differently (like strikeouts and walks). If you’re looking for a single number, it would be reasonable to believe a pitcher controls more contact than xFIP assumes but much less control than xERA assumes and adopt a rough midpoint.

Both xFIP and xERA are vastly superior to ERA as pitching metrics. ERA is fatally contaminated as a measure of pitchers by including contributions from teammates, official scorers, opposing managers and all kinds of luck. I included ERA in this chart to demonstrate how off it is, especially this early in the season. Compare each pitcher’s current ERA to his xFIP and xERA and it’s obvious the latter two are better estimators for the pitcher has performed.

The chart makes it easy to put your finger on one big factor for why the Reds have the record they do. Out of 38 games, they’ve given ten starts to Vlad Gutierrez and Reiver Sanmartin. Those two pitchers combined for a record of 0-9. Wins and losses aren’t a good direct measure for evaluating pitchers. But you get a sense of the chances the Reds had to win those games. The one game the Reds won that Gutierrez started they scored 14 runs. Both those pitchers are out of the rotation now, thank goodness.

Hunter Greene has had a strong strikeout rate, but also a high walk rate. The hard contact he gave up in one start against the Brewers has inflated his xERA. The xFIP doesn’t like his walks and especially his 28% ground ball rate. Of 112 pitchers with 30+ innings, Greene has the second lowest ground ball rate. Right now, those three stats – strikeouts, walks, ground balls – are the most important ones for Greene, as they are for most pitchers.

If you average Connor Overton’s xFIP and xERA, you end up around 4.10 and the Reds would take that going forward. Needless to say, even though his walk-rate is nice, pitchers don’t get by for long when their K% and BB% are so close. Of 159 pitchers with 20+ innings, Overton ranks #155 in strikeouts. At some point, when you allow such a high percentage of batters to put balls in play, luck will catch up. Overton has been extremely lucky with that (BABIP = .208) so far. That’s the 11th luckiest out of 159 pitchers.

Nick Lodolo only made three starts and his stats were terrific. High strikeout rate, low walk rate, above average ground ball rate. His xFIP and xERA both show that. It’s unrealistic to expect he’ll keep that up when he returns, but it would be nice to see him out there.

Luis Castillo’s stats are updated to include his stats from last night. After only three starts, they don’t tell us much but Castillo’s arsenal stats (velocity, movement) look fine. The better composite stats (xFIP, xERA) have his performance well below 4.00.