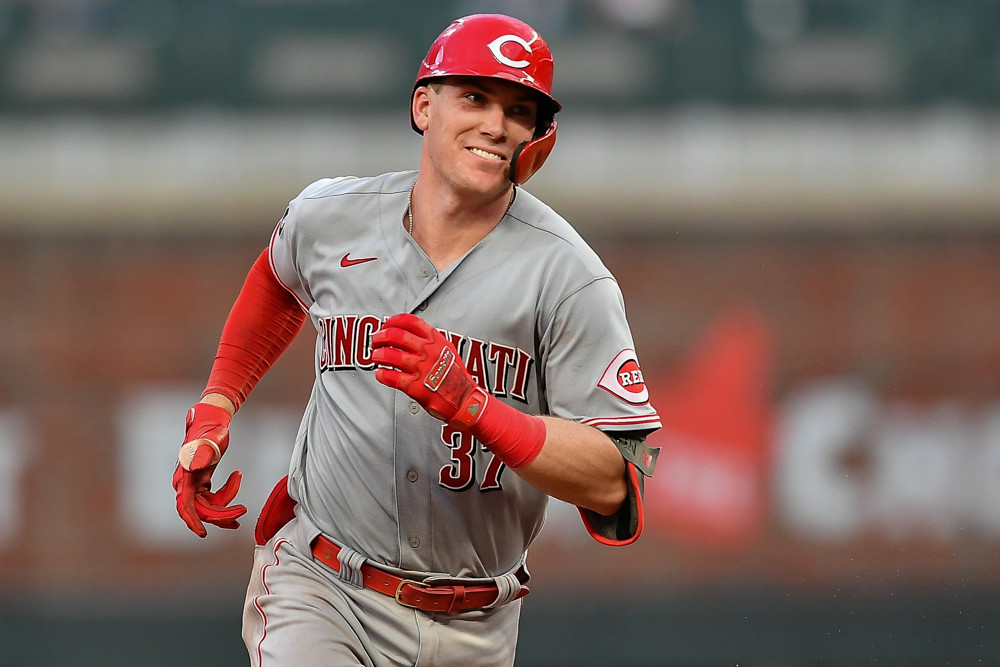 Even before I was a father, my jokes were pretty terrible. I have a goofy sense of humor that, at its very best, is an acquired taste for people. In fact, to call my jokes “jokes” is to make a joke of the word “joke.” However, I’m a father now, and I wear my corny sense of humor with pride and smile as I watch my audience cringe and roll their eyes.

As fortune would have it, though, my wife still laughs at all my terrible jokes. It’s likely that many women out there would’ve left me by now, simply for my sense of humor, yet I happened to marry the one person in the world who thinks I’m hilarious.

I’m letting you know this because I have a particularly cringy joke about Tyler Stephenson.

Every time he comes to bat, I say the same thing.

“It’s Tyler Stephenson! Not to be confused with Stephen Tylerson.” It’s a terrible joke. Truly awful. I fully admit that it’s not even funny.

Yet she chuckles every time.

The truth is that Tyler Stephenson is quickly becoming my new favorite player on the Reds. Not only is he extremely talented, but I also admire his attitude and perspective on the game. For example, after a slide from Luke Voit resulted in Stephenson going to the IL, many accused or implied that the slide was dirty. When Stephenson was asked for his opinion, he said, “Only thing that matters is he was out.”

If I were a manager, that’s the type of player I’d want on my roster.

With my new favorite player currently sidelined as a result of a broken thumb, I thought it’d be interesting to dive into what he’s been able to accomplish at the plate during the small sample size of his 2022 season.

Results on the Field

Tyler Stephenson has provided excellent production for the Reds this year. Over the span of 42 games, he’s generated a slash line of .305/.361/.468. He’s hit 5 home runs and has a 128 wRC+ and 1.3 fWAR. Simply put, in his limited time on the field, Stephenson has been one of the most productive catchers in MLB. Unfortunately, injuries have limited Stephenson’s playing time this season.

In an era where catchers are often weaker hitters, one may ask, “What exactly has led to this All-Star worthy production?”

It’s a complicated answer, but the recipe involves talent, luck and a small sample size of data.

Stephenson’s achieved great success in his limited playing time this year, but he’s been the recipient of an unsustainably high BABIP of .396. When he has put the ball in play, it turns into a hit almost 40% of the time. It’s unreasonable to expect any hitter to maintain that level of production over the course of the season.

His expected stats also suggest oncoming negative regression. Based on his quality of contact, Stephenson has an xBA and xSLG of .245 and .401, respectively, both fairly lower than what he’s been able to generate on the field. That’s still decent for a catcher, but not quite the All-Star numbers he has generated this far. Building on this thought, his strikeout rate has also gone up, coinciding with a decrease in his walk rate. 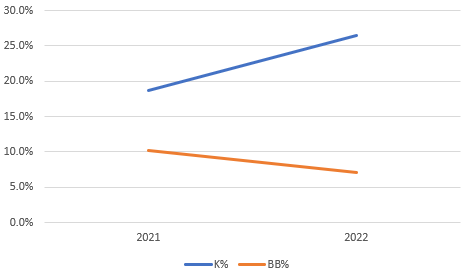 If he continues hitting like this, regression is inevitable, and we’ll see Stephenson come back to earth.

In spite of this, it’s worth reminding everyone that even these expected stats were generated in a sample size too small to come to any real conclusions. It’s actually reasonable to expect his contact quality will improve, as most of these metrics fall below Stephenson’s career norms as a hitter. For example, check out his MLB percentile rankings from this year compared to 2021. You’ll be able to see at a glance which areas of his game are lower than normal.

You might accuse me of being a Stephenson fanboy (and you’d be right!), but we shouldn’t let recency bias color the way we see these results.  It’s possible that the changes in his strikeout and walk percentage are the result of a changed plate approach or that pitchers have started to figure him out, but we can’t know for sure without seeing more at-bats. Ensuring a proper sample size is critical when looking at statistics, and we simply do not have enough data to make predictions about Stephenson’s future performance. Random distributions often do not appear random (hence the logical fallacy of hot vs. cold streaks), and it’s reasonable to expect Stephenson’s quality of contact to improve given a larger sample size.

Tyler Stephenson has provided incredible production for the Reds this year and has so far lived up to expectations of a first-round draft pick. His bat has been a boon for a struggling Reds offense, so it is unfortunate that he’s lost so much playing time due to fluke injuries.

So, what can we expect from Tyler Stephenson once he returns? The short answer is that it all depends on his progression as a hitter. If he continues to develop, there’s reason to believe he can maintain the stellar production he’s generated so far this year. If he does not, his end of the year slash line will likely be respectable but less impressive.

Regardless of his ceiling as a player, it’s obvious that the Reds’ offense takes a big hit when his bat isn’t in the lineup. As a fan, I can only wish him a speedy recovery.

I’d much rather see Tyler Stephenson than Stephen Tylerson.