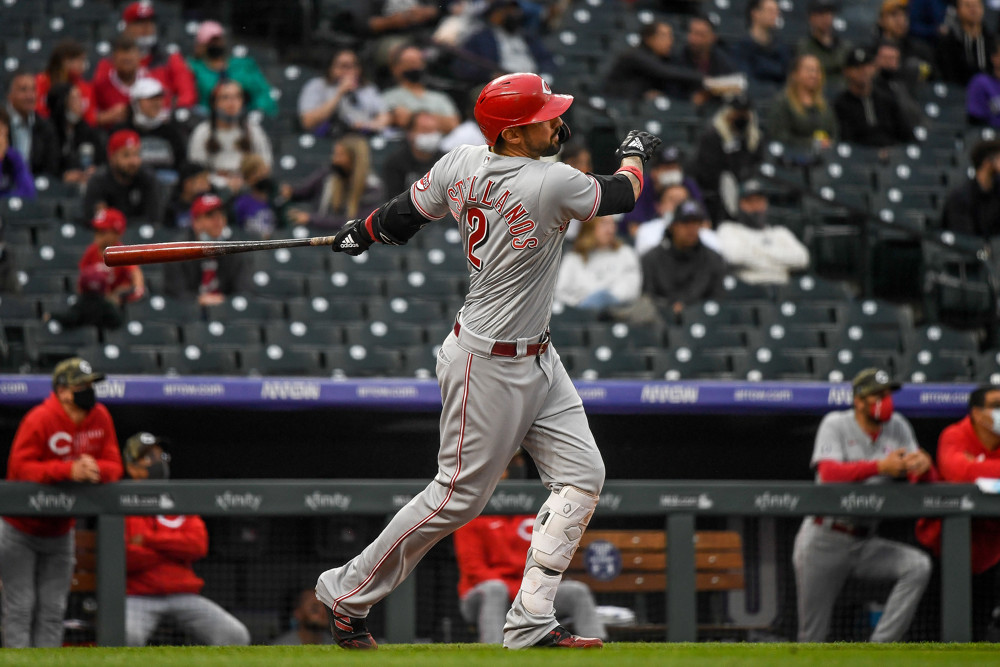 The soon-to-be All-Star provided some pre-Fourth of July fireworks for Reds fans, blasting a go-ahead grand slam in the seventh inning to spark a 12-4 Reds win over the Phillies on Monday night.

The Reds continue their dance with a winning record, moving one game above .500 at 39-38.

Rookie Spencer Howard started for the Phillies, and he’s had some bizarre splits this year. Check out his numbers the first and second time through an opposing lineup:

True to form, he held the Reds in check through the first two innings, giving up a pair of singles to Eugenio Suárez and Tucker Barnhart but nothing else. But in the third inning, it fell apart. Howard walked Wade Miley to begin the inning. That was followed with a rocket of a lineout (106.2 mph) by Jonathan India, which was a sign of things to come. Jesse Winker followed with a double in the right-center field gap (102.4 mph), and Nick Castellanos drove both runners home with a single up the middle (104.4 mph).

That proved to be it for Howard, who was pulled for piggyback reliever Bailey Falter. The Reds once again struggled against a left-handed pitcher, as Falter threw four shutout innings, allowing only a couple of singles and a walk.

But once the Reds got deeper into the Phillies bullpen, the magic started. Pinch-hitter Alejo Lopez, who was called up from Triple-A earlier in the day, lined a single to right field against Falter on the first pitch he saw as a major-leaguer. How’s this for a list? The last five Reds to get a hit on the first pitch they saw in the majors:

The Phillies turned to Neftali Feliz, who was making his first MLB appearance since 2017. Feliz promptly walked Aristides Aquino on four pitches. With two outs, Winker was hit by a pitch, setting the stage for Castellanos to deliver in grand fashion.

Castellanos lined the first pitch he saw down the left-field line, and the ball landed just foul. It turned out to be for the best. The Reds right fielder sent the next pitch he saw into the Reds bullpen for a grand slam (99.6 mph, 412 feet) to give the Reds a 6-4 lead, igniting the crowd at Great American Ball Park.

Retweet if Nick Castellanos is an All-Star.

Reply if Nick Castellanos is an All-Star.

The Reds tacked on six more runs in the eighth inning against the Phillies’ woeful bullpen. Suárez led off with a walk, followed by a Tyler Stephenson single. Kyle Farmer attempted to give himself up with a bunt, but pitcher Enyel De Los Santos threw the ball down the right-field line, scoring Suárez and Stephenson. Two batters later, India scored Farmer with a single up the middle.

Castellanos’ big day wasn’t over, as he smashed a double down the left field line and India made a beautiful, headfirst slide to dodge a tag at home. Castellanos would score on a wild pitch to make it 11-4.

Joey Votto put the cherry on top of the scoring outburst by walloping a solo home run (108.0 mph) at 435 feet into the right field bleachers.

Wade Miley had his first off game in a while. The southpaw gave up four runs on eight hits and three walks in six innings. It was only the third time in 14 starts that he’s allowed more than two earned runs in a start. Miley did strike out seven and racked up a season-high 17 swings and misses.

The Phillies didn’t hit Miley hard often (80.2 mph average exit velocity), but they hard him hard when they did.

After the Reds took the lead in the bottom of the third, Miley (perhaps tired from running the bases?) gave it right back. Bryce Harper led the inning off with a screaming line drive single (108.7 mph) and scored on a blistering double by Alec Bohm (108.4 mph). A bunt single and a fielder’s choice later, Bohm scored to tie the game at two.

The Phillies got to Miley for two more runs in the fifth. Odubel Herrera led off with a single, and Miley walked Andrew McCutchen with one out. Following a Harper flyout, Bohm burned the Reds again with another RBI double as Miley couldn’t put the Phillies third baseman away after getting ahead 1-2. Miley then walked Luke Williams to load the bases. Ronald Torreyes hit a ground ball to the left side, which Suarez cut in front of shortstop Mike Freeman to field. Rather than throw to first, however, Suarez tried to make the out at second. Williams had a huge lead at first and beat the throw rather easily, allowing another run to score.

Heath Hembree threw a scoreless seventh inning, working around a two-out walk with a pair of strikeouts.

Ryan Hendrix retired the side on seven pitches in the eighth inning with three groundouts.

Gifted with an eight-run lead, Josh Osich fired a 1-2-3 ninth to secure the win.

Nice job as usual Mat. In a postgame interview, Miley primarily blamed his mental approach on his 5th inning difficulties (trying to “power his way” through hitters), but he also mentioned being drenched in sweat and feeling overheated from his base running.
It was frustrating to watch but after he blanked the Phillies in the 6th I felt the Reds would come back.

The last 3 caught stealings I’ve seen in Reds games (twice by the Reds, one by the opponent) have all involved the baserunner making it to second on time and then over-sliding. Given that IFers now hold the tag so even a one or two inch over-slide results in an out, you would think baserunning coaches and baserunners would have focused on learning to slide without over-sliding. It’s probably difficult in some cases, but you wouldn’t know that there has been an adjustment at all.

I hope the strict enforcement of oversliding doesn’t cause more head-first slides. Head first is easier to grab and hold on. Feet first seems loaded with opportunity to come off. Head first causes more injuries, though.

We got into a short discussion on Twitter about that stolen base attempt last night. I was hoping Bell would send Freeman once India got down in the count two strikes, maybe even before that. By the time there were two strikes, the odds of scoring a runner from first were extremely low. Steal second and even if it’s an out, your leadoff hitter is leading off the next inning. The Reds stolen base success percentage is by far the lowest in baseball. It’s not that Bell doesn’t know the odds. But he almost always steals with two outs and often two outs and two strikes. He’s factoring in that run expectancy drops so low in those situations/counts that the risk/reward changes. The downside of a CS is a lot lower.

Suarez has made two spectacular plays over the last couple of days. Made a big mental error last night too, of course, on the throw to second that wasn’t close to getting Williams. It was scored a single, but as Larkin said: “That was a routine ground ball.”

He makes mistakes at 3rd base but is so much better there than SS.

Brantley said: “That’s a play that should have been made. It was a misplay. Baseball people watching at home or in the dugout know that.”

I was going to include that in the newsletter this morning but decided to stay focused on the positive given the moment. Also going to mention Suarez with a 38 wRC+ against lefties this year.

He has made several spectacular plays in the field in recent days. But I still hold my breath every time the ball is hit to him.