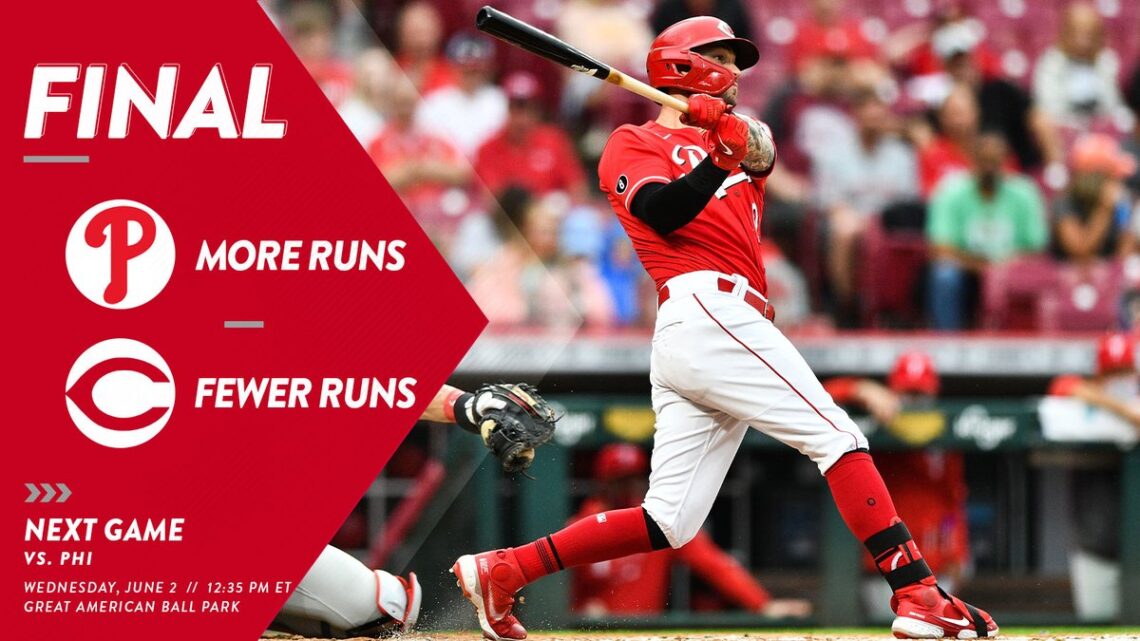 The Reds got out to an early lead and kept the game close through the middle innings even after losing the lead. Everything began to fall apart in the sixth inning, and the end result was not pretty, as the Reds fell to the Phillies 17-3.

Tyler Stephenson led off the second inning with a ground ball single, the first Reds baserunner of the game. This continued his somewhat troubling trend of hitting the ball on the ground, something he had done 54.8% of the time this season. Tyler Naquin followed with a 112.1 mph home run to put the Reds on the board. Kyle Farmer then added a single of his own. A flyout and double play ended the inning and the Reds’ scoring threat.

Eugenio Suárez singled on a breaking pitch in the third inning. That’s particularly notable as he came into the game hitting just .134 with a .141 expected batting average (xBA) on breaking pitches this season. That extended his streak of reaching base in every game he has started since moving to the leadoff spot.

Nick Castellanos led off the fourth with a single, extending his hitting streak to 18. That is the longest hitting streak by a Red since Brandon Phillips in 2007 and the longest in the Majors this year. Two batters later, Naquin drew a walk, though the inning ended on a Farmer double play.

Jonathan India singled up the middle in the fifth, and proceeded to steal second base. Mike Freeman, making his first appearance with the Reds, singled to score India after entering the game the previous half inning in a double switch.

Castellanos began the sixth with a double, followed by a walk by Stephenson that chased starter Aaron Nola from the game. Naquin then grounded into the Reds’ fourth double play of the night and pinch hitter Scott Heineman struck out to end the inning.

Alex Blandino singled in the ninth before being erased on a game-ending double play.

Sonny Gray had his strikeout stuff today, but was unable to limit the damage on the scoreboard, while failing to finish five innings.

Gray retired the side in the first, striking out one. In the second inning, he allowed just a lone two-out walk for the Phillies’ first baserunner of the game.

Gray allowed a leadoff home run in the third to Ronald Torreyes. Two batters later, he allowed another solo HR to Odubel Herrera.

JT Realmuto led off the fourth inning by reaching on a single and advancing to second on an error by Farmer. He advanced to third on a wild pitch and would end up scoring on a single. The run was considered earned for Gray, and gave the Phillies a 3-2 lead.

Gray struck out the first two batters he faced in the fifth before allowing a single. After a stolen base advanced the runner to second, Gray allowed an RBI double to push the Reds’ deficit to two. David Bell then made a double switch.

Gray ended up pitching 4 2/3 innings, allowing four runs on six hits, walking one and striking out eight. He recorded a 36% CSW (called strikes plus whiffs), a number better than his season and career averages.

Heath Hembree came in to finish the fifth, walking the first batter he faced before striking out the next batter to end the inning. He stayed on to start the sixth, allowing a HR and a single before being lifted.

Amir Garrett came in to replace Hembree, allowing an RBI double to the first batter he faced. After retiring the pitcher on a sacrifice bunt, Garrett allowed a home run to push the score to 8-3. He then allowed a single and yet another home run. He was then able to retire the next two batters to end the inning, but the Reds were now down seven runs.

Alex Blandino came in to finish the eighth, retiring the first batter he faced to end the inning. Blandino pitched the ninth as well, allowing two singles and a walk before allowing a grand slam. Those were the first four runs Blandino had allowed in five career pitching appearances.

After the grand slam, Mike Freeman moved in from shortstop to pitch. Freeman faced reliever Archie Bradley, striking him out looking while failing to top 62 mph. Reds fans left with some consolation, as Freeman’s strikeout of Bradley was the 11th of the game, meaning free pizza.

The Reds conclude the Phillies series with an afternoon game at Great American Ball Park. First pitch is at 12:35 p.m. EST. Rookies Spencer Howard and Vladimir Gutierrez face off in what the Reds are calling “Re-Opening Day” as they return to full capacity.

Nothing new here.
We know the bullpen is not very good, and will have bad games.
Blog commenters joke about relievers bringing a gas can to the mound but most of the time it is an exaggeration. True in this case and this Reds’ bullpen will do that every so often.
Question is, what are the Reds going to do about it?
Running guys out there to work through their problems without changes or adjustments is folly.
If the Reds had lost 5 to 3 most fans’ attitude would have been “that is okay, win some, lose some, there is still 108 games left.”
I don’t think this team is destined for playoffs but there is still a lot of games left.
This very same bullpen has done the job many times this year.
At this point optimism is obviously not called for, but neither is full blown pessimism.