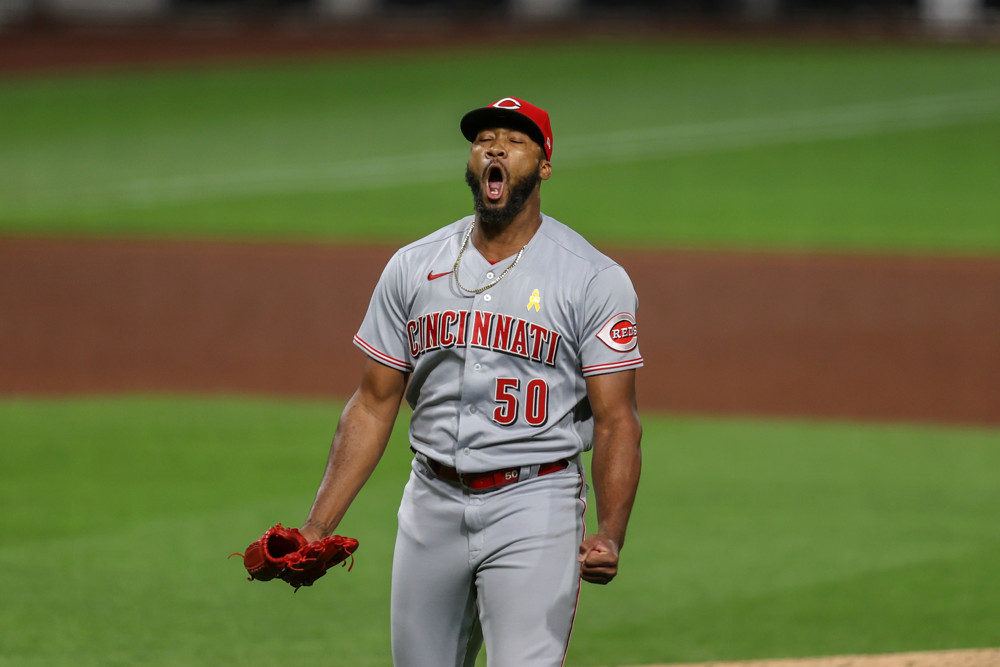 Although the bats cooled off on Tuesday night, the Reds stayed hot as a team, topping the Brewers 2-1 in extra innings to secure the series win.

This was a pitching duel through and through, as the teams went into extra innings scoreless. Despite picking up only two hits in the game, though, the Reds came out on top when the Brewers bullpen finally blinked.

This is just the Reds 2nd extra-inning win since at least 1901 with 2 or fewer hits. The other was the Fred Toney vs Hippo Vaughn double no-hitter on 5/2/1917 that the Reds won with 2 hits in the 10th inning.

The Reds have now won five straight games and made up quite a bit of ground in a short amount of time in the NL Central. With the Cubs and Brewers both losing Tuesday, the Reds are now three games back of first in the division.

Not much to talk about here. The Reds won the game despite having only two hits in 10 innings, a testament to how strong their pitching was.

The Reds couldn’t take advantage of Brewers starter Brett Anderson, who entered the game with a 4.99 ERA, 5.60 FIP, and 4.85 xFIP. Anderson struck out nine Reds in the game, his highest strikeout total in a start since June 2015. He had the lowest strikeout rate among all starting pitchers in baseball coming into the game.

Predictably, the Reds could do nothing against Brewers super relievers Devin Williams and Josh Hader, either. Winker singled off Williams in the eighth inning, and India walked against Hader in the ninth, but nothing came of either minor threat.

The top of the 10th inning was only the second time in the game that the Reds had a runner on second base, and that was only because the rules dictated it. Former Reds reliever Brad Boxberger was erratic, though, and handed the Reds a pair of runs. Nick Castellanos was the runner on second base to start the inning, and he only needed to jog to score the go-ahead run. Boxberger hit Tyler Stephenson, walked Joey Votto, and hit Eugenio Suárez to plate the first run of the game. After Winker struck out, Farmer hit a sacrifice fly to give the Reds a 2-0 lead. The Reds missed a chance for more when pinch-runner Mike Freeman was picked off at second base. Fortunately, the inexcusable baserunning blunder didn’t come back to haunt them.

Luis Castillo continues to look more like his usual self, an enormous development for the Reds pitching staff. He fired seven shutout innings against the Brewers on Tuesday, allowing three hits and three walks while striking out seven. Five of his seven strikeouts were on called strikes.

His four-seam fastball, which averaged 97.3 mph, was his primary weapon of choice. He threw it 43% of the time and got nine whiffs on 16 swings against it. Almost all of those whiffs were up in the zone: 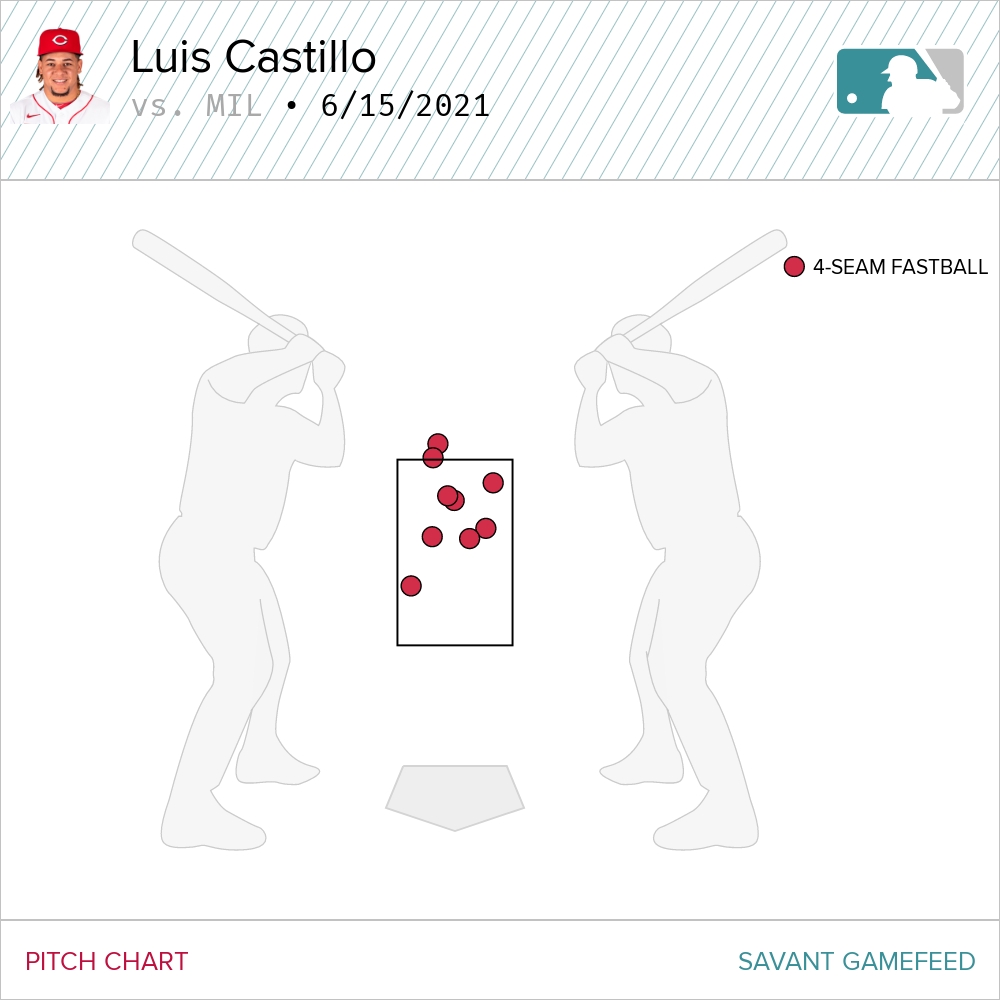 Castillo lived down in the zone with his other three pitches, and to great effect. 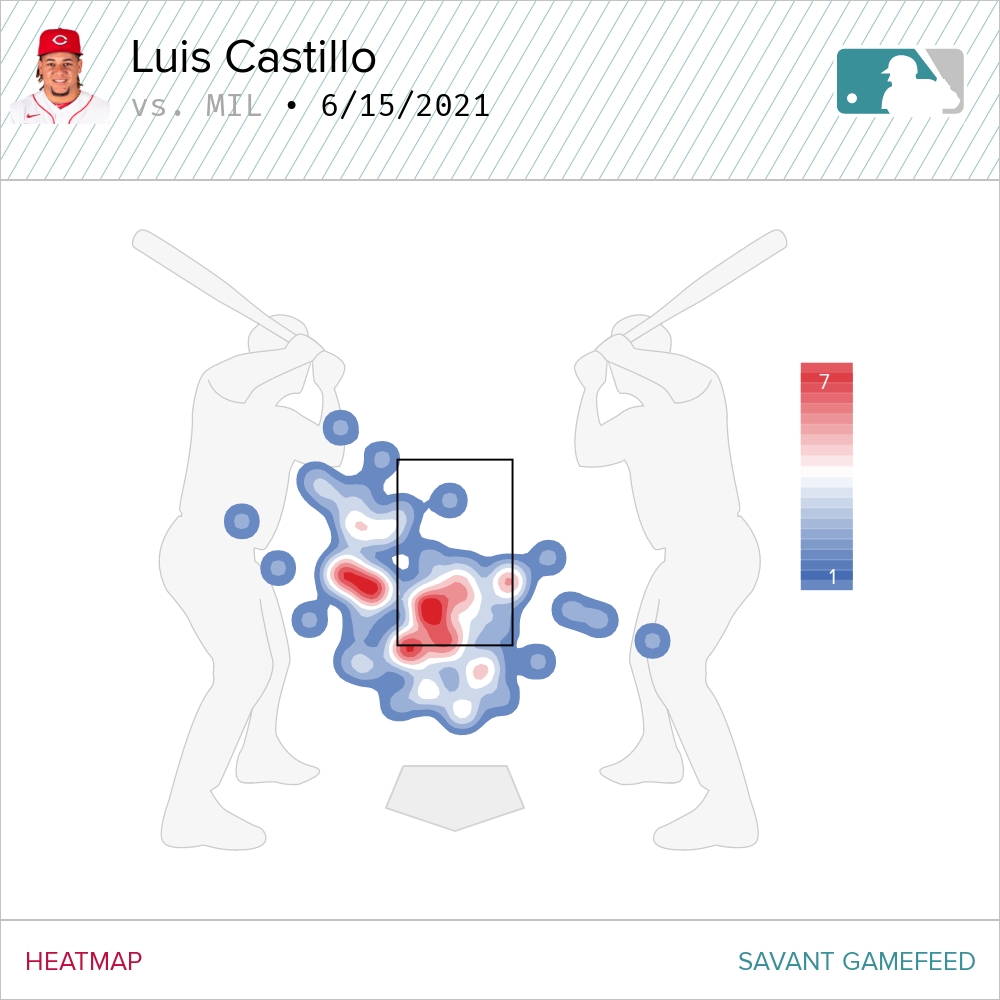 Of the 16 batted balls Castillo allowed, 11 were hit on the ground. The right-hander also held the Brewers to an average exit velocity of 83.6 mph. That combination will play all day.

Castillo didn’t allow a hit until the fifth inning, and promptly erased that baserunner with a ground ball double play. His biggest jam came in his final inning. After striking out Christian Yelich to begin the frame, he gave up a weak infield single to Avisail Garcia. Third baseman Eugenio Suárez had a chance to make a play but bobbled the ball on the transfer, allowing Garcia to easily beat out the throw. Omar Narvaez then singled to put runners on first and second base. The Reds had a chance to escape the inning with another double play, but Suárez bobbled another ball and the Reds had to settle for just one out.

Castillo then got ahead of Jace Peterson 0-2 and threw four straight balls to load the bases. David Bell showed faith in his pitcher, however, and was rewarded as Castillo struck out Jackie Bradley Jr. on a generous called strike from the home plate umpire.

It was smooth sailing for Brad Brach in the eighth inning. He sandwiched two strikeouts around a popout to retire the Brewers in order. His fastball averaged 95.0 mph, up by 1.5 mph from his season average.

Lucas Sims walked Yelich to begin the ninth inning but retired the next three Brewers hitters to send the game to extra innings.

Heath Hembree began the 10th inning instead of Sims, who threw 18 pitches in the ninth. Hembree struck out Peterson in a 12-pitch at-bat to begin the inning before fanning Bradley Jr. Next batter Daniel Robertson hit a bloop single to right field (68.9 mph off the bat) to score the ghost runner from second base and make it a 2-1 game. Right fielder Nick Castellanos made matters worse by overrunning the ball and allowing Robertson to move up to second base. Hembree then walked Luis Urias, ending his night. Although Hembree faced only four batters, Brewers hitters made him work as he threw 31 pitches.

Bell turned to Amir Garrett to secure the victory, and AG came through by striking out pinch-hitter Tim Lopes.

The Reds will go for the series sweep and their sixth win in a row on Wednesday at 2:10 p.m. EST. We’ll have a great pitching matchup on tap, with Tyler Mahle facing Freddy Peralta.

Not that it matters much, but Suarez bobbling the ball on transfer allowed Yellich to get on base in the 4th inning. In the 7th inning he cleanly barehanded a slow rolling ground ball by Garcia but then threw wide to first. Garcia was credited with a single but clearly would have been out if Votto didn’t have to leave the bag. So Suarez had 3 defensive miscues, two in the 7th which forced Castillo to get 5 outs.

Freeman’s baserunning blunder was about as bad as it gets. Put in as a pinch runner for Votto, he’s picked off by a wide margin (even though he was remarkably originally called safe). That robbed Shogo of a chance to drive in a 3rd run and could have cost the game.

Regardless of Anderson’s statistics, he was extremely sharp, putting pitch after pitch exactly where he wanted. He was sharper than Devin Williams, who couldn’t locate his fastball but the Reds couldn’t lay off of his change up.

Good job pointing out some of the things the Reds still need to work on, Pinson.

I pointed out a few games ago that the Reds need to improve in the bullpen and on defense. The bullpen is pitching much much better. Still need to work on the D.

Bottom line though, despite the shortcomings the Reds are winning!!