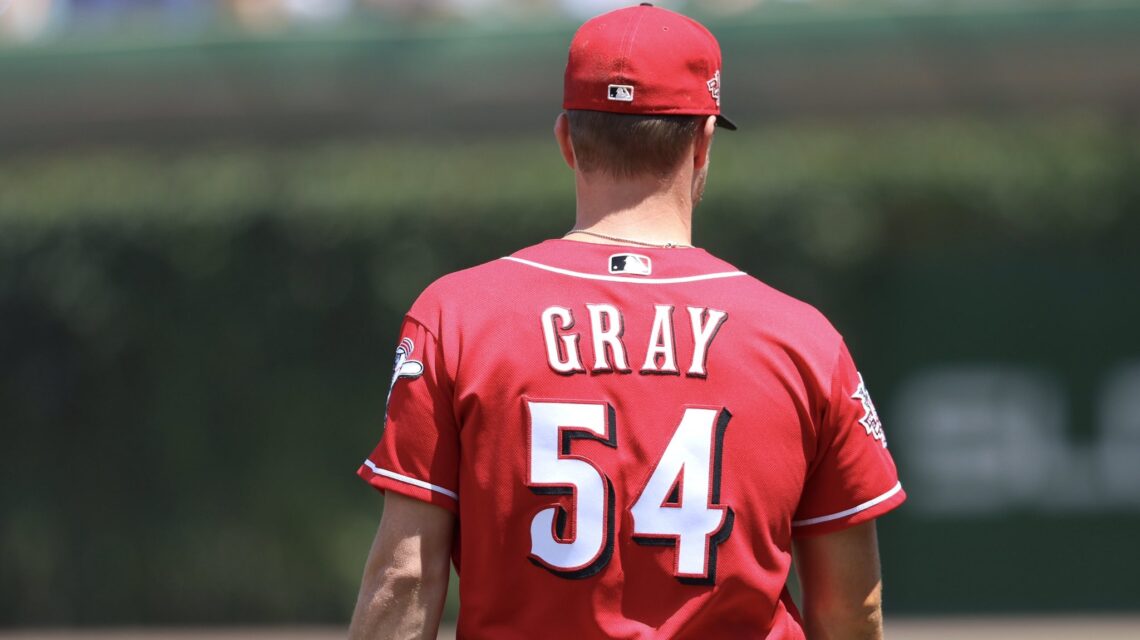 On a day when success on offense meant getting a single, the Reds needed a masterful showing from the pitching staff to keep pace with opposing starter Corbin Burnes. Instead, starter Sonny Gray and the bullpen struggled resulting in a 8-0 loss to Milwaukee. The Reds finished a disappointing series that saw them swept by the division-leading Brewers and drop to 48-45 in the win-loss columns.

The Reds are still in second place in the NL Central, but are now seven games back from the division lead.

Despite a lead-off walk from Jonathan India, the offense never really threatened in the 1st inning.

Fast forward to the 4th inning. The Reds get their first hit of the ballgame on a Joey Votto one-out line drive single into right field. That would be all, though, as Tyler Naquin then grounded into a fielder’s choice force out at second before Eugenio Suárez struck out to end the inning.

Facing one of the best pitchers in the National League in Corbin Burnes, it was to be expected for the offense to struggle. However, it was somewhat surprising to see the offense this aggressive, resulting in several short at bats. Through the first 4 innings, Burnes had thrown just 51 pitches. If the Reds wanted any chance of seeing a reliever, they would have to change their approach at the plate.

Over the next four innings, the Reds’ offense was able to generate just two singles while striking out seven times. The highest EV in those four innings was Tucker Barnhart‘s 85.5 mph single in the 5th.

In the 9th inning, still facing Burnes, the Reds finally advanced a runner past first base. After a one-out single by Jesse Winker, Votto hit a groundball to Tellez at first who threw the ball over the head of Peterson at second, but Urías backed up the throw ensuring that the runners stayed at first and second. Naquin then hit a ground ball up the middle that was fielded by Adames, but the throw was late. Bases loaded for the Reds with just one out.

Now facing reliever Angel Perdomo, Suárez and Barnhart both struck out to end the game.

Gray found himself in some trouble already in the 1st inning. After getting ahead of lead-off hitter Jace Peterson 0-2, Gray hit Peterson with a breaking ball. Next, Peterson would steal second before Luis Urías hit a line drive single into left field advancing Peterson to third base. Christian Yelich would then hit a ground ball back to Gray who now had Peterson caught between third and home. Peterson would be tagged out, but the Brewers now had runners on second and third. Gray then walked Willy Adames to load the bases. Ahead 0-2, Gray would again hit a batter, this time Rowdy Tellez, to bring in a run for the Brewers.

Finally, Gray found his footing with a strikeout of Tyrone Taylor on a beautifully placed sinker and a groundout from Jackie Bradley Jr to end the 1st inning.

With a strikeout of Manny Piña, it looked like the 2nd inning would perhaps be quicker than the first, but Gray, despite giving up no runs, once again labored through the inning. By the end of 2, Gray had thrown 46 pitches.

After this, however, Gray would retire the next 6 batters on just 16 pitches, including 2 strikeouts.

In the 5th inning, Gray started off well with a strikeout of Peterson, but then gave up a scorching ground ball single into center field that Shogo Akiyama had trouble fielding, allowing Urías to reach second on the error. Gray would get Yelich swinging before walking Adames and Tellez loading the bases once again. Tyrone Taylor jumped on a first-pitch slider for a ground ball single through the left side of the infield. Two Brewers would come home, making the score 3-0 Brewers.

Next, Bradley Jr. would hit a line drive down the right field line for a two-out triple. Both runners would score, giving the Brewers a 5-0 lead. This would be all for Gray today as he went 4.2 innings, giving up 5 runs on 6 hits while striking out 6 and walking 4. Overall, Gray didn’t have a bad day. Control was a bit of an issue, and a couple of HBP didn’t help matters. But his stuff was there. He worked the strike zone extremely well with his sinker against righty hitters, getting these 8 called strikes: 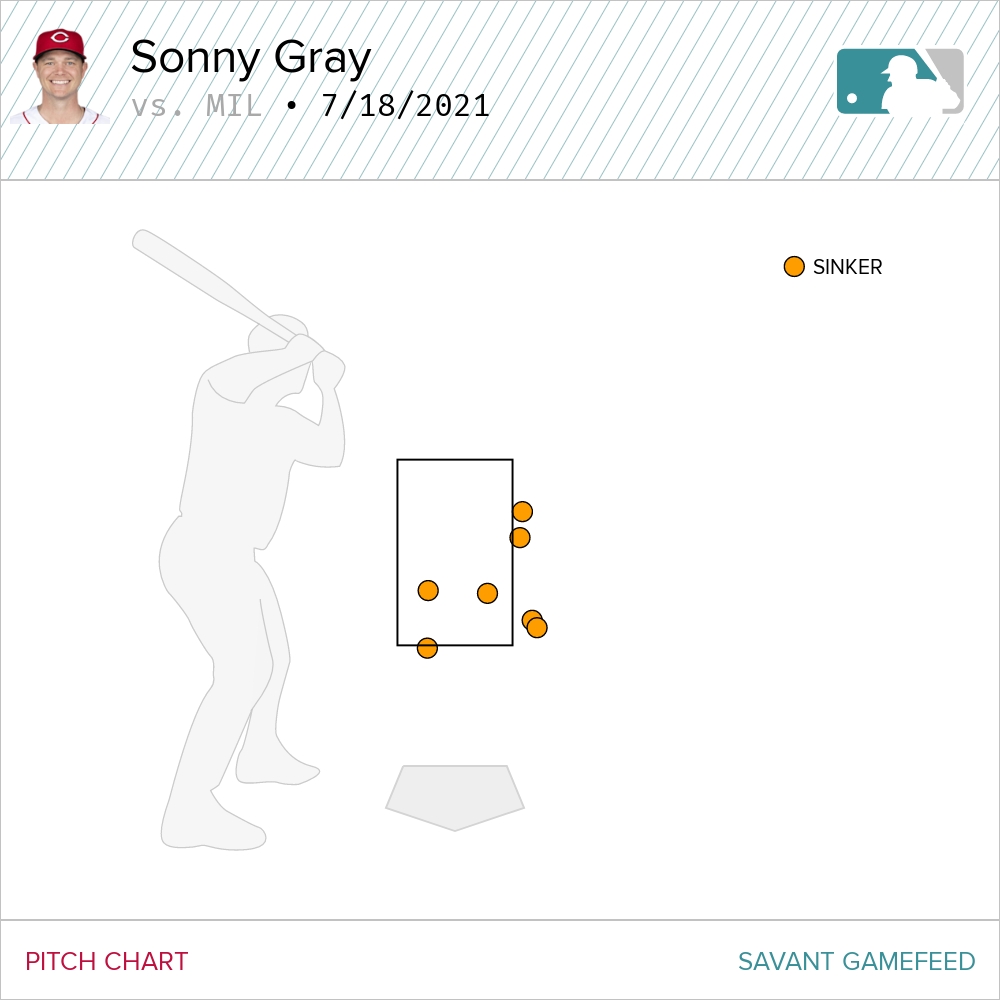 Meanwhile, Gray worked his curveball down and away to lefties to great effect, getting these strikes, two of them swinging: 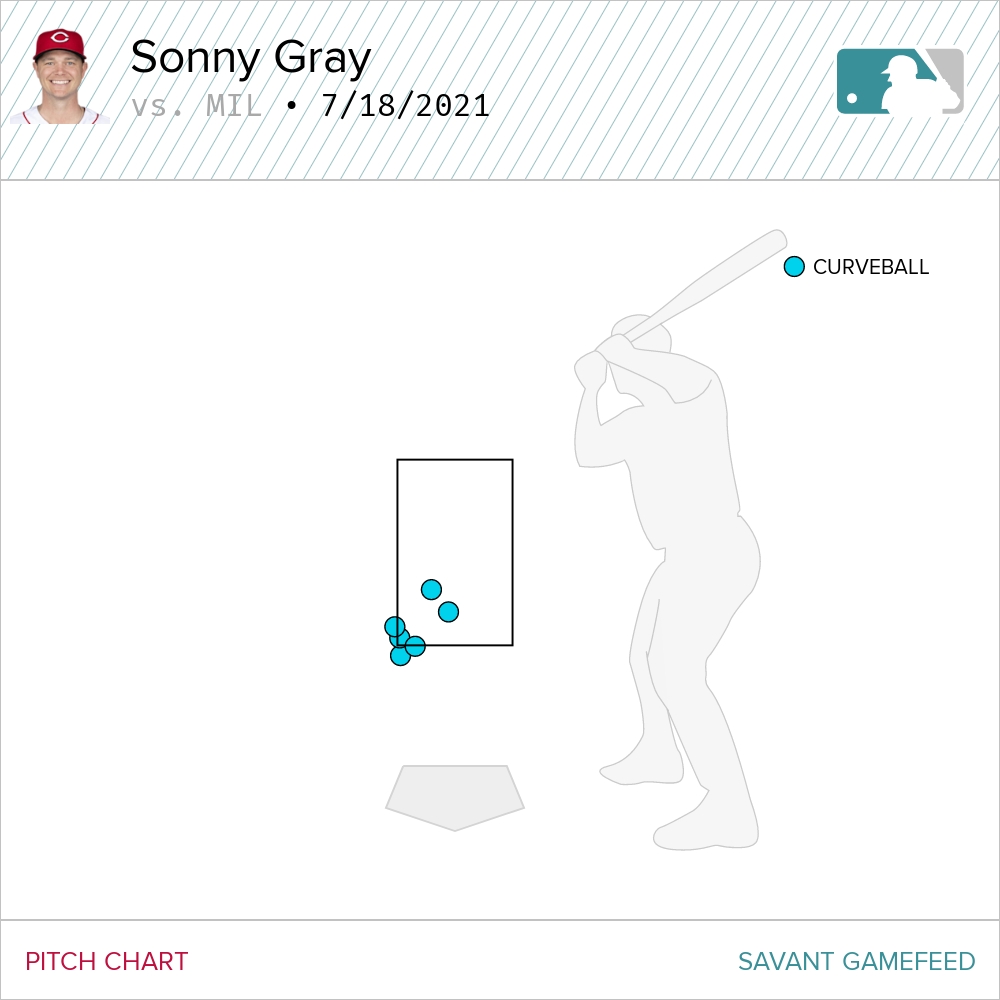 Furthermore, though Gray did allow 13 balls to be put in play, his avg EV was a really solid 83.4 mph.

Coming into the game with two outs and a man on third Ryan Hendrix wasted little time, striking out Piña to end the inning.

In the bottom of the 5th, Hendrix would be pinch hit for, so taking over in the 6th was left-hander Cionel Pérez. Pérez made quick work of the Brewers’ batters with two groundouts and a strikeout.

After a great first inning of work, Pérez came back out for the top of the 7th inning, and immediately gave up a lead-off homer to Yelich, giving the Brewers a 6-0 lead. Next, he would walk Adames before striking out back-to-back batters. With two outs, though, Bradley Jr. hit a ground ball single into center field that advanced Adames to third, but Pérez was able to induce a groundout from Piña.

Tasked with getting three outs in the 8th inning was Sean Doolittle. The left-hander struck out Burnes for the first out, and then got Peterson to fly out for the second out. Urías would ground out to end the inning.

Rookie Tony Santillan was asked to get the final three outs for the Reds’ pitching staff, and after giving up a ground ball single to Yelich, a wild pitch would allow the former NL MVP to reach second. Adames then hit a home run into the right field stands, extending the Brewers’ lead to 8-0. Santillan would get out of the inning, though, with no further damage done.

Tomorrow, the Reds welcome the New York Mets to Cincinnati to begin a three-game series. For the Reds it will be right-hander Vladimir Gutiérrez making the start, while the Mets have yet to name a starter. First pitch will be at 7:10 PM EDT.

The Brewers didn’t have much available in the bullpen today, especially with the injuries to Williams and Boxberger. Burnes had not being going deep in games. The Reds only chance was to get him out of the game while still close.

Yeah, it was somewhat curious to see the Reds batters this aggressive. Of course against a controlled pitcher like Burnes you’re kind of damned if you do, damned if you don’t when it comes to swinging and taking pitches. So I imagine the Reds felt it better to swing early and hopefully rattle Burnes by stealing a couple of hits. Didn’t happen, though.

With the score at 1-0 and two out in the 5ht, the 3-2 walks to Adames and Tellez were pivotal. After the 26 pitch first inning, I believe that Gray tired at that point. Pitchers talk about how a 30 pitch inning is more fatiguing than two 15 pitch innings.

That’s right. That was the pivotal moment of the game, particularly the 4-pitch walk to the light-hitting Tellez. It may not have made any difference if Gray had gotten Tellez out quickly, what with the way Burnes was pitching, the offense non-existent and that still leaving four innings to cover. But Gray’s inability to finish the 5th was decisive.