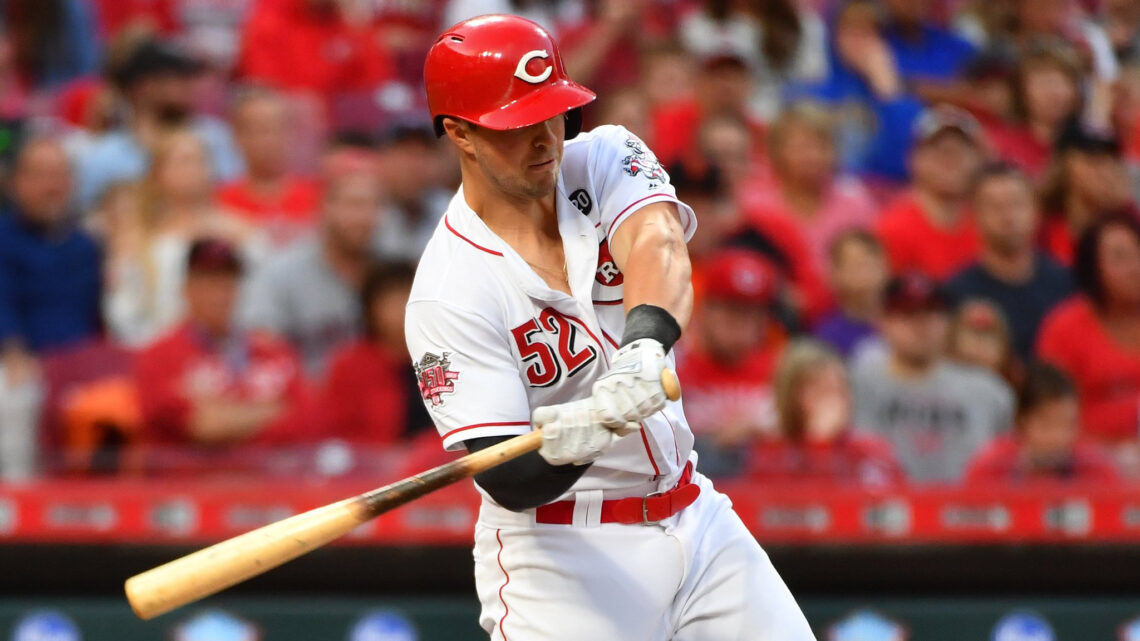 The game got away very quickly when the Reds needed those final four outs. What was shaping up to be a good team win was quickly undone by poor relief pitching and an error that could have all but ended the game anyway. Instead, the Red’s winning streak ends at five as the Royals scored two in the eighth and four in the ninth. The game tomorrow becomes that much more important to regain momentum for the pivotal series against the division-leading Brewers before the All-Star break.

The two surging rookies leading off for the Reds, Jonathan India and Tyler Stephenson, both reached in the first inning – India with a walk and Stephenson with a ground ball single through the right side. Unfortunately, a fielder’s choice and double play put an abrupt halt to the threat.

After a 1-2-3 second inning, the Reds drew first blood in the third. Kyle Farmer opened the inning with a line-drive single to left. Shogo Akiyama beat out the potential double-play ball before India drove a deep fly ball to center field. While the ball was hit 100.1 mph and went 400 feet, according to Statcast, there was only an xBA of .380. Michael Taylor was there to make the play but mistimed the jump as it fell in for a double. Akiyama was able to motor in from first to take the lead. Stephenson followed with a flare to right field that moved India to third, putting men on the corners. After a strikeout, Joey Votto stepped to the plate and hit a flyball down the line to left field. While only an xBA of .070, the large ballpark and left fielder playing off the line allowed the ball to fall in and Votto to make his way to third for a triple making it 3-0 Reds.

The Reds came back for more in the top of the fourth as Tyler Naquin roped a one-out, 100.5 mph single up the middle. Farmer then kept his night rolling by blasting a home run (104.2 mph 406 feet) to left field to extend the lead to 5-0.

You can bet the Farm that this ball is outta here. pic.twitter.com/cW3FZcjEiQ

After back-to-back innings stranding runners in scoring position, the Reds were back again for more in the top of the seventh. With one out, Nick Castellanos ripped his league-leading, 28th double past a diving Taylor in center field that was good for a double. After Castellanos advanced on a ball in the dirt and a Votto strikeout, Eugenio Suarez extended his hit streak to five games by muscling a broken-bat single over the shortstop to score Castellanos from third, pushing the lead back to five at 6-1.

Luis Castillo continued his streak of great starts for the Reds going seven complete innings with four strikeouts, only allowing one run. He flirted with triple digits on the radar again (99.6 mph really rounds up anyway) and was getting swings and misses on both the slider and changeup. It is starting to sound like a broken record, but Castillo continues to put up performances in June, and now July, that the Reds had expected coming into the year.

Castillo opened the game with a quick first inning with three well-hit balls that included a 98.1 mph comebacker from Andrew Benintendi. Castillo flashed the leather, snagging the comebacker for the second out of the inning before a Salvador Perez drove a deep line drive that Akiyama was able to track down at the wall in dead center field to end the inning.

Castillo remained unscathed through the fourth inning, stranding runners at first and second in both the second and fourth innings. Unfortunately, a hanging slider ended the shutout in the fifth as Taylor homered (102.4 mph 397 feet) to make it 5-1. Castillo retired the next nine batters through the seventh inning, leaving after 99 pitches with a 6-1 lead.

Cionel Perez entered in relief in the eighth and opened with a strikeout that got away from Stephenson behind the plate, allowing Hanser Alberto to reach first. After a foul out and another strikeout for what should have been the third out of the inning, Andrew Benintendi launched a home run to right field (99 mph 396 feet) to cut the Reds lead to 6-3 and ending Perez’s night.

Brad Brach only needed three pitches to strike out Carlos Santana to end the eighth. However, Brach opened the ninth with a walk and hit the next batter to put two on with no outs. Brach then got a hard ground ball to third base that went right through Suarez’s legs. Instead of a 5-4-3 double play to all but eliminate the threat, a run scored, and the tying run moved to second.

Heath Hembree came and got a strikeout before a single scored Hunter Dozier from third, and an errant throw from Aquino allowed Taylor to score from second, tying the game. The potential winning run was able to make it all the way to third on the overthrow. After Hembree pitched around Whit Merrifield, Amir Garrett entered. Garrett struck out Benintendi on a check swing, but Salvador Perez stepped in and smoked a two-out walk-off over Aquino’s head to end the game.

The Reds conclude the series with the Royals in an afternoon game in Kansas City. First pitch is at 2:10 p.m. EST as Sonny Gray faces off against Brady Singer.

I said a few weeks ago that the Reds needed to improve:
the bullpen a lot,
the defense
and the offense some.
The bullpen improved a lot lately until last night, the offense has played better but the defense is not improved.
I wish our professional major league players were a little more professional and diligent about improving their defense.
Last night these weaknesses came back to haunt the Reds.
Here is hoping it happens infrequently and not regularly as it did early in the season.