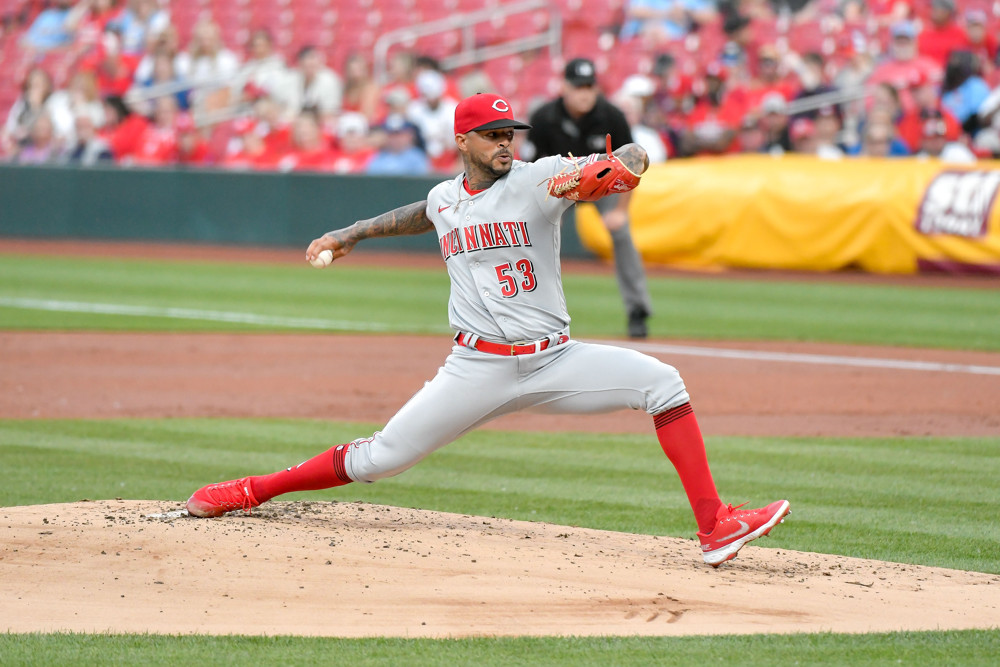 The Reds got another strong performance from Vladimir Gutierrez and solid defensive performance, only allowing two runs to the reeling Cubs, whose losing streak stopped at twelve games. While the bats were quiet through the first four innings, the Reds had opportunities from the fifth inning on but were always missing that last hit to push the runs across.

Kyle Hendricks kept the bats silent through four innings, allowing no hits, and only putting Joey Votto and Tyler Stephenson on with walks, neither getting past first base.

With one out in the bottom of the fifth, Votto walked for his second time in the game. Tyler Naquin stayed through a changeup that was well off the plate for a bloop single that fell in center field for the first hit for the Reds. The runners were ultimately stranded after a strikeout and groundout would end the threat.

The second hit of the game was quite a bit louder for the Reds. With two outs, Nick Castellanos got a sinker that stayed up in the zone and sent it to the seats in right field (104.7 mph, 412 feet) to make it 2-1.

Yo his name is Nicholas and this is ridiculous. pic.twitter.com/5qDdWzi9pQ

Stephenson followed with a line-drive single to left but was left on first following a strikeout to end the sixth.

Kyle Farmer and Tyler Naquin opened with back-to-back singles to left to put runners on first and second with no out. Following a Shogo Akiyama strikeout, Tucker Barnhart took a fastball off his elbow pad to load the bases for the top of the lineup. After a good inside fastball froze India for strike three, Votto grounded a ball right back up the middle, but the Cubs had their defense shifted to cover and the inning ended without any runs.

The Reds would go down in order in the eighth and ninth innings.

Vladimir Gutierrez turned in another solid performance, going 6.1 innings and allowing two runs. He ended the night with a career-high seven strikeouts, only one walk, and scattered nine hits. Gutierrez mixed his offspeed in even more tonight, only throwing his fastball 42.5% of his 80 pitches.

Gutierrez made relatively quick work of the Cubs in the first inning. After a Rafael Ortega flyout, Frank Schwindel’s groundball found its way up the middle for a single. Gutierrez got a flyout followed by a strikeout swinging on a slider running away from Patrick Wisdom to end the inning.

With one out in the second, David Bote and Austin Romine had back-to-back hard-hit groundballs (111.1 mph and 105.6 mph respectively) up the middle for singles. Gutierrez’s first-pitch curveball to Andrew Romine got one more groundball up the middle, but India was there to start the 4-6-3 double play to end the threat.

After making quick work of Kyle Hendricks, striking him out on four pitches, Gutierrez issued his first and only walk of the game. Frank Schwindel then pulled a groundball double that hugged the line past third base all the way to the corner in left field allowing Ortega to score from first. Ian Happ followed with another single up the middle to put runners at first and second, but Gutierrez induced another groundball for the 6-4-3 double play to go to the bottom of the third.

The Reds’ defense offered some support in the fourth inning. Jason Heyward sent a 379-foot line drive to deep right-center field. Shogo Akiyama tracked the ball, jumping into the wall and making the grab for the long out.

Two pitches later, India was shifted perfectly for the 108.1 mph groundball that shot past Gutierrez to get Bote at first. Gutierrez took care of Austin Romine with three straight breaking balls to end the inning.

Gutierrez opened the fifth the same way he closed the fourth, by striking out one of the Romine brothers. After Hendricks’ bloop single to shallow right-center, Gutierrez got a popout to short for the second out of the inning. Schwindel offered a check swing at a slider in the dirt for Gutierrez’s fifth strikeout of the game.

Ian Happ was down in an 0-2 count to open the top of the sixth when Gutierrez threw a slider that appeared to do more than just clip the bottom of the strike zone for what should have been strike three. Gutierrez left a changeup up and out over the plate that Happ punished to right for a solo home run (104.2 mph, 380 feet) to extend the Cubs’ lead to 2-0.

Gutierrez got Andrew Romine to strike out on another check swing on a slider away for his career-high, seventh strikeout of the game. After giving up a line-drive double, Gutierrez yielded to Justin Wilson. Wilson kept the Cubs at bay, getting a flyout to right for the second out. Schwindel smoked a 109.5 mph ball that short-hopped Mike Moustakas at third. “Moose” picked the ball, saving a run, and threw across for the third out.

Luis Cessa came on in relief in the eighth, and Happ welcomed him by smacking a line drive over the shortstop for a single. Cessa then got Wisdom to send a high, but shallow, flyball to center field that ended up in between Naquin, Akiyama, and Farmer and ultimately fell in for what was ruled a single. After striking out Heyward on a slider in the dirt, Cessa induced the third double play of the day to get out unscathed.

Tony Santillan, after being called up earlier today, pitched the top of the ninth for the Reds. Santillan threw a clean inning, striking out one to keep the score at 2-1.

The Reds conclude the Cubs series with an afternoon game at Great American Ball Park. First pitch is at 12:35 p.m. EST as Tyler Mahle faces off against Adrian Sampson.

The Akiyama at bat in the seventh was the worst I have ever seen for him, and just generally terrible – while also being terribly costly in failing to tie the game. He seemed mentally overwhelmed, swinging at multiple pitches well off the plate. He has been physically overmatched by many hard-throwing pitchers, but seeing his strike zone judgment come unglued was a real low point. I like his fielding and his leadership (the gravitas to call out JV is notable), but any more AB’s like that may earn him a DFA.