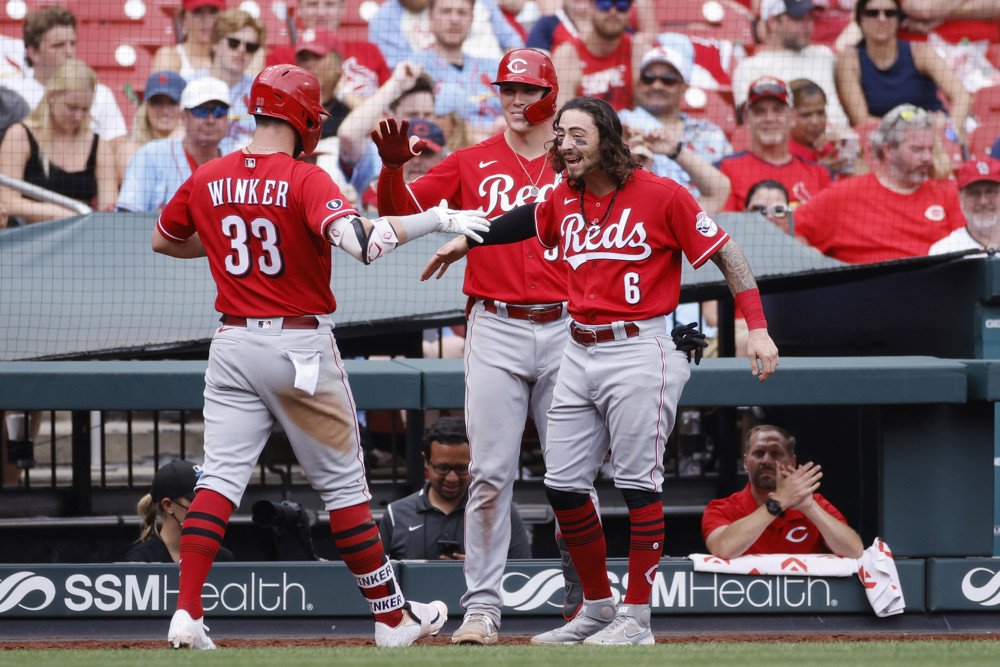 The Reds offense got to let off a little steam after a frustrating loss last night and frustrating road trip so far, unleashing five home runs on 14 hits for 12 runs on the Braves to salvage one game of the series. Vladimir Gutierrez pitched a strong six innings for his fourth straight win and the bullpen kept the door closed in the blowout win. The Reds will need to carry this momentum into the three-game set in Philadelphia this weekend.

Jonathan India wasted no time getting started, taking the first pitch to deep left-center for a double, but he was ultimately stranded at third base.

Braves starter Kyle Muller picked up two outs to start the second, bringing up Tyler Naquin and the bottom of the Reds order. Naquin turned on a low and inside curveball and almost sent the line drive over the right-field wall. Unfortunately, it caught the brick above the padding and bounced back hard to Jorge Soler for only a single. Vladimir Gutierrez followed with a groundball through the right side that was mishandled by Soler, allowing Naquin to hustle through second to third.

Muller seemed to pitch around India with a five-pitch walk to load the bases for the lefty on lefty matchup with Jesse Winker. This would prove to be a mistake. Muller left a 2-1 slider out over the middle of the plate, and Winker pulled the ball to right over the brick wall, hitting the first row of seats for a grand slam (107.7 mph, 362 feet).

The Reds were back for more in the third, as Joey Votto banged a ball off the right-field wall for a single. After a fielder’s choice, Aristides Aquino worked a five-pitch walk to put runners at first and second, which closed the book on Muller. Eugenio Suarez welcomed the bullpen with a double to the left-field gap, scoring Tyler Stephenson from second to extend the Reds’ lead and keep runners at second and third.

This at-bat, Naquin made sure the ball got over the brick in right field as his line drive landed in the first row of seats for a three-run home run (104.9 mph, 361 feet).

🎶 Hit my pitches out in Georgia 🎶 pic.twitter.com/pZNY85rOTW

After a strikeout, India wanted in on the action, jumping on a 1-1 inside fastball to deep left for another home run (100.5 mph, 405 feet). Winker followed, shooting a single to left before being stranded.

His name is @JonathanIndia… also known as future NL Rookie of the Year. pic.twitter.com/bYnGm9mamg

Winker led off the sixth with a double down the right-field line, bringing up Kyle Famer. Farmer skied a fly ball down the left-field line with a 45-degree launch angle that found its way inside the foul pole and over the wall (98.7 mph, 381 feet). Stephenson followed with his second single of the day before being balked over to second base but would be stranded there.

After a couple of quiet innings, Stephenson hit the fifth Reds’ home run of the day, sending a solo shot (102.1 mph, 402 feet) to deep center to extend the lead back to 12-2.

Vladimir Gutierrez delivered another exceptional performance over six full innings, throwing 102 pitches. Gutierrez had his offspeed, mainly his slider, working for him this evening as he had eight whiffs on 19 swings (shown below), three of which were for strikeouts. Ultimately, Gutierrez ended with six strikeouts, two walks, and allowed his only run in the first inning. 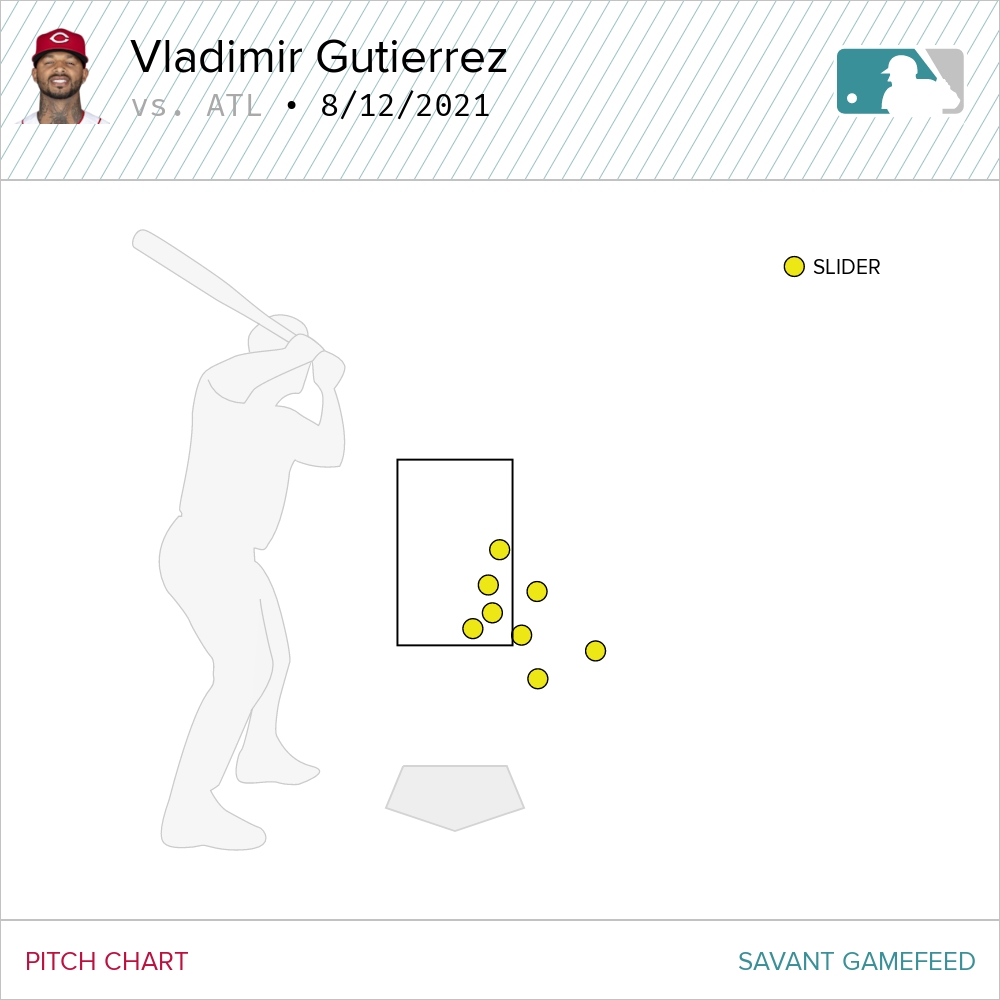 Gutierrez opened the game with a strong three-pitch strikeout on a changeup low to Ozzie Albies. After walking Soler, Freddie Freeman sent a 101 mph line drive to right field that Aquino was able to track, making a jumping catch for the second out. A second walk put runners on first and second before Dansby Swanson looped a ball to right field. Aquino seemed to get a late break on the ball as it fell in, and Soler scored from second, putting the Braves up 1-0. Gutierrez got a groundout to short to end the threat.

The second inning was a strong, quick, 10 pitch inning for Gutierrez, including two strikeouts to the bottom of the Braves’ lineup as he continued to mix in his offspeed well. He followed the second with another scoreless inning, only allowing a single to Soler through the right side. Gutierrez had yet another 1-2-3 inning in the fourth, including a three-pitch strikeout to former Red Adam Duvall. Gutierrez got Duvall swinging on another slider away.

The Braves threatened in the fifth for the first time since the opening inning. After getting a flyout, reliever Josh Tomlin hit a groundball that found its way up the middle for a base hit. Albies then rolled a groundball to the right side in between Votto and India. Votto tried to get to it, but it went off his glove for an error, putting men on first and second. After starting Soler off with a fastball for a ball, Gutierrez came back with three straight sliders to strike out Soler swinging. Freeman pulled a groundball to the hole at second base. Ranging to his left, Kyle Farmer made a diving stop, quickly getting to his feet to make the play and end the inning.

Austin Riley and Swanson opened up the sixth with back-to-back singles up the middle to put two on with no outs.  Gutierrez induced a hard groundball right at Suarez, starting the smooth 5-4-3 double play wrung up Joc Pederson looking on a 3-2 changeup to end his night after six strong innings.

In relief for the seventh, Jeff Hoffman cruised through his first two batters, striking out one, but gave up a home run to Albies (104.7 mph 399 feet) to make it 11-2. After walking Soler, Hoffman got another strikeout swinging at a fastball up in the zone. Hoffman followed his seventh by pitching a clean 1-2-3 eighth, striking out the first two hitters of the inning.

Amir Garrett had a shaky ninth that started with a dropped flyball in shallow left by Suarez. A single to left-center put runners on the corners with no outs. After getting a lineout on a great sliding play by Aquino, Garrett struck out Albies. A wild pitch got away from Stephenson and allowed Joc Pederson to score from third before a strikeout ended the game 12-3.

The Reds start a three-game series with the Phillies to end their road trip in Philadelphia. First pitch is at 7:05 p.m. EST as Tyler Mahle will take on Zack Wheeler.

I like this team because every time I feel sure they’re going to lose, they win.
Nice “Happy Recap”, Chris, I refrained from watching the game, not wanting to repeat the suffering of last night, and decided I would check on the outcome here first, maybe bringing better luck.

Gutierrez has continued to exceed my expectations (based on his K% and BB%). He has worked on spotting his fastball. It’s not the liability it was at the start of the year. I’m glad he’s worked out so far, because it’s hard to see another candidate for a 5th starter anywhere short of Hunter Greene.

Look at those ‘hardest hit’ balls!

I like the WPA stats Chris, but I just went back to yesterday’s recap wondering what Votto’s one man band WPA was from the Wednesday game. And that also got me wondering what the highest WPA numbers have been for individual Reds this year. Any data on those two questions?

Votto’s WPA for Wednesday was .46, his highest of the season. I’ve been poking around (mostly FanGraphs) to see if there’s a way to search or sort WPA by multiple players on a team at one time, but I haven’t figured it out if there is. It’s easy enough (but time consuming) to do each player, one at a time. I also looked around Statcast to see if the Search page allowed searches by WPA and I can’t find it. I think it’s in part because WPA is a highly teammate-dependent stat and that’s not what the stat services are into as much. Will keep looking. Interesting question.

Thanks Steve – that suggests I need to go have a closer look at WPA vs. WAR vs. WRC. It’s clear that WPA is more situational, but that makes sense now that I think about it. That also makes me wonder about highest WPA games ever. Is it possible to have several go ahead hits in the same game and accumulate a WPA higher than 1.0? I appreciate your investigation.

One other side note that the numbers guys at RC+ will appreciate. I had on my Larkin / 11 jersey for Wednesday’s game here in Atlanta. Proud to wear it (and need a Votto / 19 jersey too). But had to tip my cap to the guy in a Luckhaupt / 24 Reds jersey. Solid fannery right there!