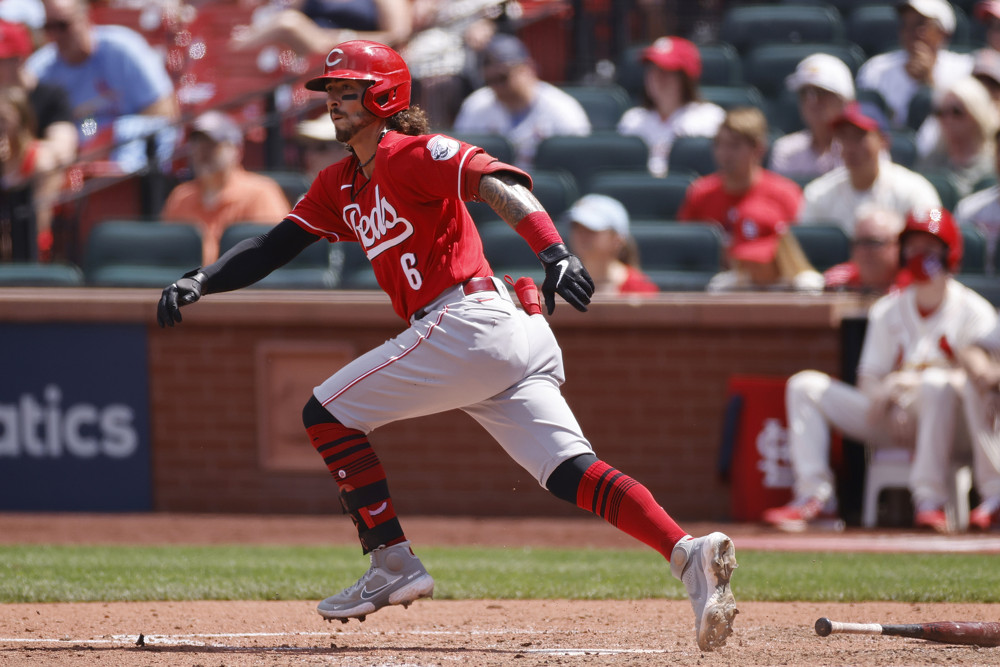 You may have heard people in the baseball analytics community refer to “expected batting average,” or “xBA” for short, but what is it?

xBA is a Statcast metric that attempts to measure a player’s batting average by estimating the probability that each batted ball will be a hit. Naturally, strikeouts will always have an xBA of .000, given that there’s no chance of it becoming a hit.

For batted balls, Statcast uses exit velocity, launch angle, and sometimes the batter’s sprint speed to determine the likelihood that the outcome would be a hit. This used to be referred to as “hit probability,” which was expressed as a percentage chance of that batted ball being a hit. In 2019, Statcast retired the “hit probability” terminology in favor of xBA, which is essentially the same statistic used on a typical batting average scale.

An example of xBA in action can be found on this Tyler Stephenson single from the August 17 game against the Cubs. This hit came with an xBA of .820, because on average, a similar batted ball with an exit velocity of 100.3 mph and a launch angle of 13 degrees results in a hit 82% of the time.

On the other end of the spectrum, you have this Joey Votto single from the August 16 game against the Cubs. It had just a .110 xBA, meaning that similar batted balls with a 76.5 mph exit velocity and 34 degree launch angle result in a hit just 11% of the time, on average.

You can also use xBA as a way of determining if a player’s batting average on balls in play (BABIP) is likely to be somewhat sustainable or not. Players holding a higher xBA along with a high BABIP would often be a player that grades out well in sprint speed. An example of this is Minnesota’s Byron Buxton, who has an insanely high .412 BABIP in 110 PA this season, but also leads the league in xBA at .322 (among players with at least 50 balls hit in play). This is due in large part to his 99th percentile sprint speed. While he certainly wouldn’t sustain a .412 BABIP, it would not be a surprise to see it stay above league average.

Alternatively, you have players like Arizona’s Josh Rojas. He currently holds a .373 BABIP, a large reason behind his solid .286 average. However, his xBA is just .234, even further emphasizing that he’s simply been fortunate this season and unlikely to sustain this level of success.

Given this understanding of what xBA actually is, let’s take a look at how Reds hitters have fared in the metric this season. For the purposes of this analysis, we will look at only the hitters with at least 150 plate appearances this season. 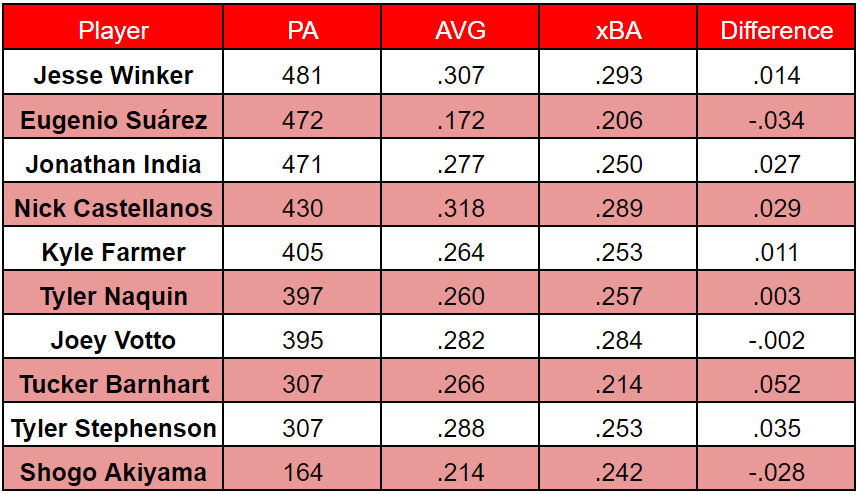 As you can see, just two Reds players have a significantly lower xBA than their actual average: Eugenio Suárez and Shogo Akiyama. In both cases, even their xBA is not where the Reds would like it to be, though it is a notable improvement from their actual numbers. Assuming there are no future changes to their strikeout rates or quality of contact, we could reasonably expect both to perform better than they have thus far in 2021 in terms of batting average.

On the other hand, four Reds hitters have “outperformed” their xBA by more than 25 points: Tucker Barnhart, Stephenson, Jonathan India, and Nick Castellanos. In Castellanos’s case, his xBA still ranks in the 92nd percentile of the league, meaning it is in the top 8% of qualified hitters. Stephenson and India each have an xBA better than the league average of .242, though it’s reasonable to say both have been a bit fortunate.

Barnhart is particularly concerning, given that his xBA ranks in just the 8th percentile of the league and is barely better than Suárez. Barnhart’s actual average is kept up by a .359 BABIP, a mark 61 points better than his career average. This leads us to a reason to believe Barnhart will not be able to sustain his current level of offensive production, and that much of his offensive success this year has been a mirage. His xBA is on the same level as his 2019 season, where he slashed just .231/.328/.380 with an 81 wRC+. The biggest difference in that 2019 season was his .278 BABIP, more than 80 points lower than his 2021 mark.

As a whole, xBA can help you paint a much clearer picture of a player’s offensive talent than you will get simply by looking at batting average. Barnhart is the best example of this for the Reds. Looking at batting average, he ranks 6th on the team and nearly on the same level as India. When you look at xBA, however, he ranks 9th, on approximately the same level of the struggling Suárez.

What is expected slugging percentage and how do Reds hitters perform with it? – Reds Content Plus

[…] week, I looked at expected batting average (xBA) and how Reds hitters perform with it. Another statistic that has become increasingly common […]