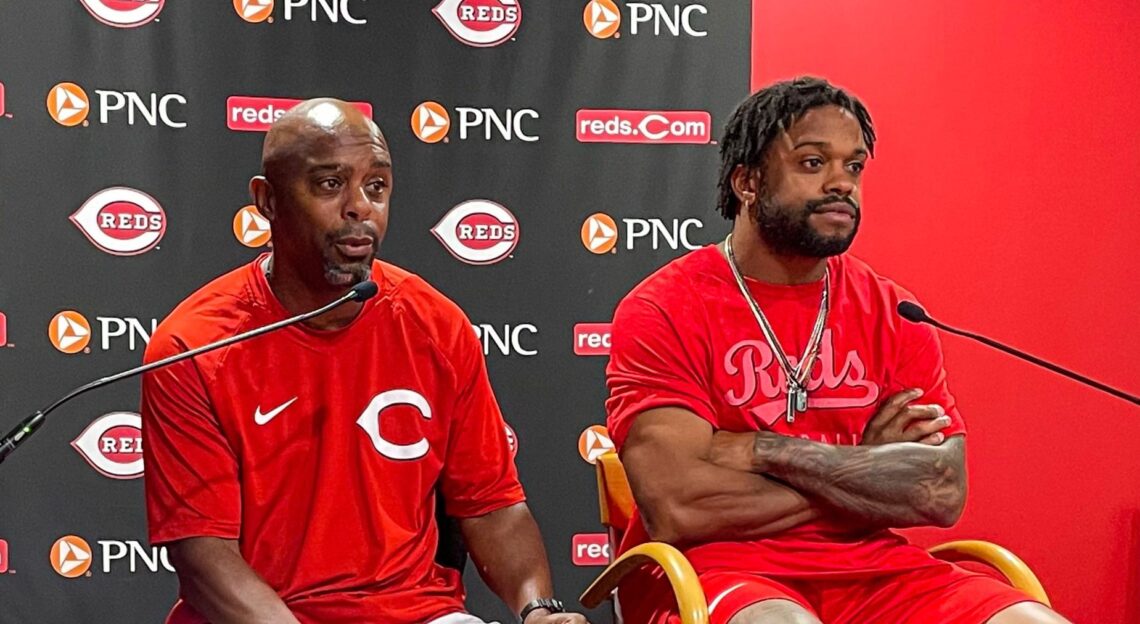 On September 1, major league baseball rosters expanded from 26 to 28 players. In addition to recalling IF Alejo Lopez, the Reds selected from Louisville the contract of OF Delino DeShields. DeShields had yet to play a game in the organization, having been acquired for cash yesterday in a trade with the Boston Red Sox. DeShields had been playing for the AAA-Worcester Red Sox. Here’s an introduction to the newest Reds player:

Delino DeShields Jr. is a 29-year-old outfielder who bats and throws right-handed.

At the age of 17, DeShields was a 2010 first-round pick (#8 overall) by the Houston Astros. After the 2014 season, having worked up to the AA level, DeShields was left unprotected by the Astros and chosen by the Texas Rangers in the Rule 5 draft. DeShields made the Rangers 2015 roster out of spring training and played in 121 games that season. He was named Rookie of the Year in the Rangers franchise.

DeShields then played the next four seasons moving between the Rangers and their minor league affiliates. Before the 2020 season, DeShields was traded to Cleveland where he played in 37 games of the COVID-shortened season. Cleveland non-tendered DeShields before the 2021 season and he became a free agent. He signed again with the Texas Rangers organization where he played three months in their minor league system.

In early August, DeShields was traded to the Boston Red Sox for cash, where he played at the AAA level until yesterday.

DeShields is a low-power, base-stealing player in the mold of Billy Hamilton. He averaged 3 home runs per year. Here are his major league wRC+ numbers:

wRC+ doesn’t account for stolen bases, which has been a big part of his game. DeShields stole an average of 20 bases a season for the Rangers, although only three for Cleveland last year. He stole 21 at the minor league level this year. At the major league level, DeShields has 109 stolen bases and 31 caught stealings. That’s a 78% success rate, just above the 75% rate that is the threshold for net positive value. By comparison, in Hamilton’s career with the Reds, he stole 277 bases in 340 attempts (81%).

DeShields was drafted as a 2B and the teenager played there through the 2013 season. In 2014, the Astros moved him to the OF of their AA team in the Texas league. When DeShields went to the Rangers, his new organization kept him in the OF both at the major and minor league levels.

As a major league outfielder, DeShields had a rough first season in the field, but became a positive defender for the 2016-2019 seasons. His metrics playing CF for Cleveland in 2020 were neutral (0 DRS, -1.4 UZR, +1 OAA).

In 2021, despite having a severe player shortage in the outfield, Cleveland declined to pay a couple million to Delino DeShields Jr. DeShields then didn’t crack the major league roster of a last-place team (Texas) over several months or make a team (Boston) in competition for the postseason.

Enter the Reds, who have desperately needed a right-handed outfield bat for months. The best the front office could do was a guy buried in several minor league systems who had been getting passed around for bits of cash. A person who certainly caught their attention because he’s related to one of the team’s coaches.

Wow. Not the move I expected. Definitely not a move that I hoped for. The odds of him becoming as good as our other Indians non-tender are remote (approaching 0 as a limit), but we can hope…